The outbreak of COVID-19, particularly in the slum settlements, has proved to be catastrophic for the terminally ill, the poor and those dependent on government support for their survival. 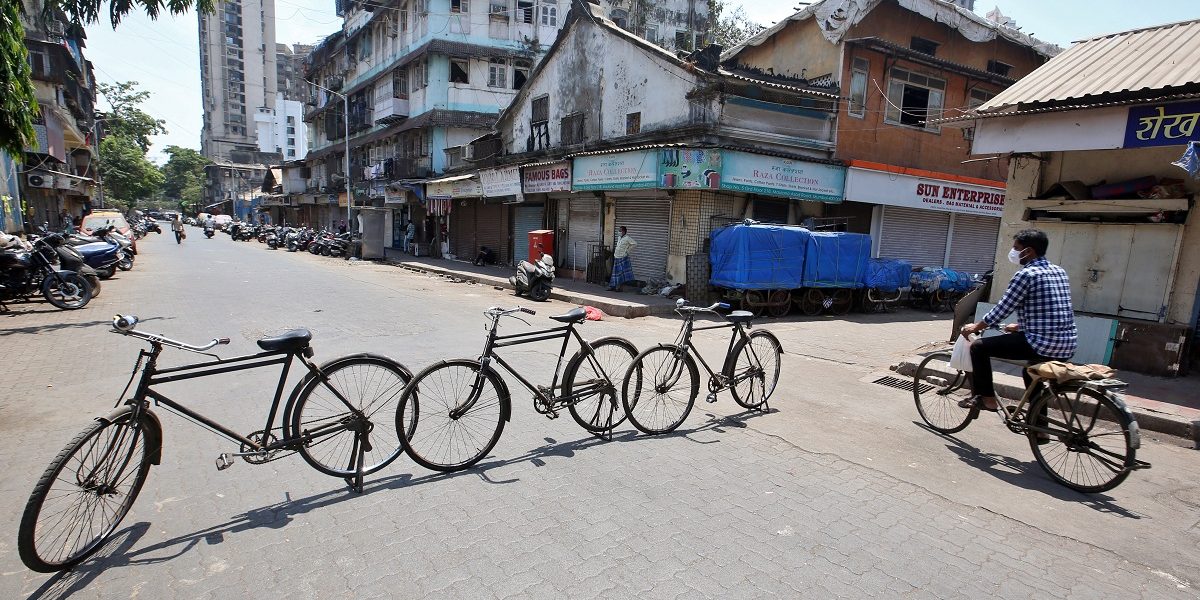 A man rides past a line of cycles erected across a road, as a blockade, during a 21-day nationwide lockdown to slow the spread of the COVID-19 in Mumbai, April 7, 2020. Photo: Reuters/Prashant Waydande

Mumbai: With every dialysis session missed, 60-year-old Shahjahan Ansari’s ankles swell up and her joints stiffen due to the rapidly increasing fluid overload in her body. She has been suffering from an end-stage renal failure and has been receiving dialysis treatment three times a week for nearly two years. But in the past week, when the Millat Nagar hospital in Mumbai’s western suburb of Jogeshwari shut down after two patients tested positive for COVID-19, Ansari had to miss two consecutive dialysis sessions.

Because Ansari’s family falls in the Below Poverty Line (BPL) category, her treatment is covered under the Mahatma Jyotiba Phule Jan Arogya Yojana (MJPJAY). But when the hospital had to shut down for a few days, Ansari, like more than 250 others undertaking dialysis treatment at Millat Nagar hospital, was asked to first undertake a COVID-19 test at a private laboratory to be able to avail free dialysis in another hospital. This test, priced at an unaffordable Rs 4,500 was to be undertaken on their own expense, with no support coming from the government. (The Supreme Court has since ordered that tests should be conducted free of cost.)

“Those accessing healthcare under the MJPJAY are all from extremely poor backgrounds. We have been out of jobs for nearly a month and this sudden demand to conduct such an expensive test at a private clinic was impossible for most of us,” Ansari’s son Fahim told The Wire.

Also Read: Backstory: Media Please Note, COVID-19 Has Brought out the Best and Worst in Us

It was a double-whammy for the Ansari’s. They live in Jogeshwari’s Prem Nagar colony, or Bandra plot as it is popularly known, which has at least six cases of COVID-19. As a preventive measure, the Brihanmumbai Municipal Corporation (BMC) has declared the area, where over 50,000 persons live, as a “containment zone”, sealing every entry gate leading to the settlement. “Movement in the area has been curtailed. My mother can’t walk without support and I had to run around looking for a way to first get her to the testing centre, several kilometres away, and then find her an alternative place to undergo the treatment,” Fahim says.

The outbreak of COVID-19, particularly in the slum settlements, has proved to be catastrophic for the terminally ill, the poor and those dependent on government support for their survival.

Despite the complete lockdown, Mumbai, as of April 9, had as many as 381 containment zones. Along with a few residential buildings and hospitals, several slum pockets have been completely sealed and marked as a “containment zone”. As of April 10, 1,008 COVID-19 patients have been identified only in the Mumbai region.

When Mumbai registered its first COVID-19 case on March 11, the civic body’s focus was on identifying all those who had travel history to “affected countries”. Within two weeks, the nature of the spread had already shifted and the municipal corporation had several cases of those who came in contact with infected persons. But officials say in the past two weeks, the challenge has been to reach out to the densely populated slum pockets of the city. Many cases identified in the slums of Mumbai have people who have not had any travel history or the source of the local transmission can’t be traced. 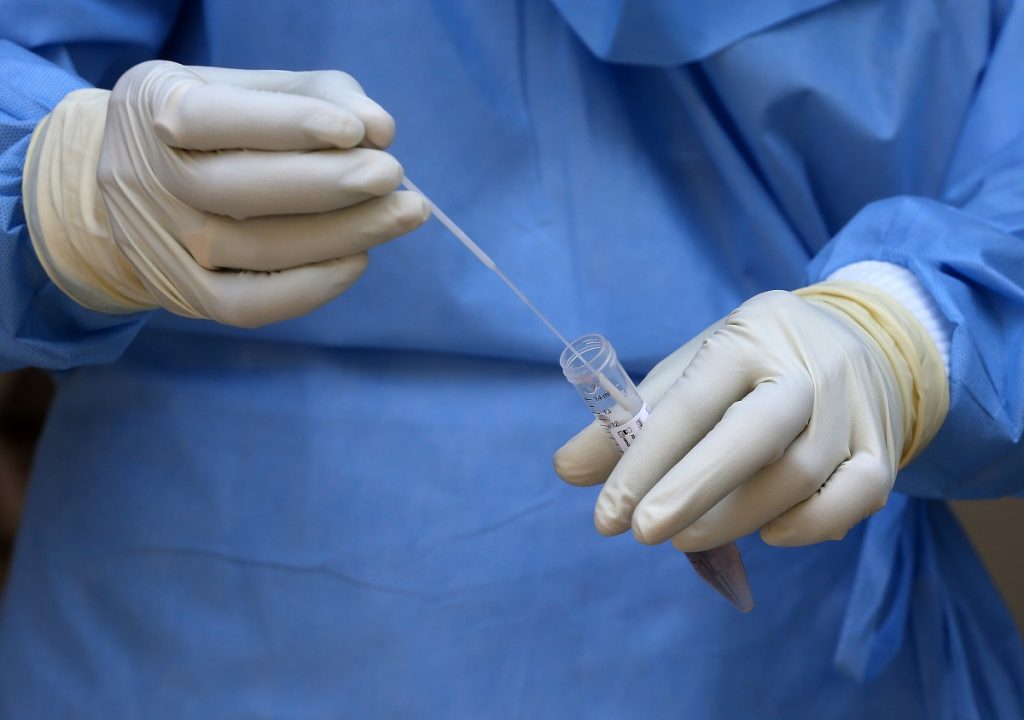 A doctor wearing a protective suit stores a swab in a test tube after taking it from a man to test for coronavirus disease (COVID-19), at a residential area in Mumbai, India, April 8, 2020. Photo: REUTERS/Prashant Waydande

The census 2011 data indicates that over 42% of Mumbai’s population lives in slums. Which means high population density is concentrated in sparsely available land and people struggle for access to basic amenities and health services. Government apathy is prevalent here.

Sajid, a young community worker in Jogeshwari, says he has been juggling several SOS calls from across the basti asking for food grains, medical help, ambulance to be made available to those stuck inside the containment zones. “If you don’t work, you don’t earn. And most people here live a hand to mouth existence. While the state seems to be taking measures to ensure the virus doesn’t spread, it is unmindful of the hunger and other concerns of the poor,” Sajid says.

Several NGOs and self-help groups have been chipping in and have been trying to reach out to those in need. Several online fundraising campaigns have been initiated since the lockdown and volunteers have been making dry food and cooked food packets available.

But relief work is particularly difficult in a containment zone, Sachin Nachnekar says. Nachnekar, who works with Youth for Unity and Voluntary Action (YUVA), an NGO that has been working with the urban poor for over three decades has had to lug the food sacks and manoeuvre several levels of hurdles before reaching out to those left without food and essential services in Mumbai’s western suburbs. “Since most of the entry points have been sealed in these bastis, it has become difficult to take our relief vehicles inside. The police simply say that we will have to lug the food sacks and walk to every gully. It not only delays the relief work but also leads to harassment of our young volunteers who are working day in and day out to help those in distress,” Nachnekar says.

Since the lockdown, most labourers have survived just with the help made available by local NGOs and community centres. Girish Sonawane, a worker in a steel unit in Sakinaka, says help has been made available only on some days. “We don’t have a place to cook food, so we need ready-to-eat food to be made available to us. It reaches us some days. On other days, we survive on biscuits and bread,” he says.

The difficulties faced are not specific to one or two areas but symptomatic of every settlement where people lack the financial capacity to stock up food for a long period. And the situation worsens when the areas are put under a complete lockdown making it difficult for them to even avail ration shops or the subsidised state-run food service, Shiv Bhojan scheme.

Towards the end of March, when over six persons—without any travel history—tested positive, the authorities had to immediately seal the entire Worli Koliwada area. Since then, the area has been a hotspot. In less than two weeks, cases here have risen to 51. The civic authorities claim to have surveyed over 14,000 houses and now the adjoining Worli BDD chawl, Janata Colony and Adarsh Nagar area have also been added into the containment zone. The G-South ward under which Koliwada and other areas fall have around 133 cases of COVID-19 so far.

While the health officials moved swiftly into the area to conduct door-to-door surveys, the same urgency was missing when dealing with those who did not have food or milk for several days.

Rubina, a 65-year-old resident of Worli Koliwada, says she had to survive on a loaf of bread and water for two days. She called the police helpline several times before help finally arrived. “The police here would chase away anyone who stepped out even for a few minutes to buy essentials. I don’t have a refrigerator to store perishable items, so setting out is inevitable. But the police wouldn’t allow it,” she says.

Most slums across the city are occupied by migrants from within and outside the state. Most of them are engaged in daily wage work or work in the malls and other service industries. Roofed under a one-room facility, Sanjay Shinde, convener of NGO ‘Aapli Mumbai’ says it is difficult for families to stay indoor 24×7.

“Lives in slums work in shifts. You can’t possibly have 7-8 persons living together in 10×10 feet room. People here mostly work in different shifts so that the room has enough space for people to live in. And when all of them are home, you will see people pouring into the street. This is a way of survival here,” Shinde says.

But last month, when the police began to close down areas in Dharavi after a spate of cases, several people – out of lack of space – were found outside their homes. An estimated 10 lakh people live in Dharavi, a crammed five-square-kilometre maze of narrow lanes, ramshackle buildings, shanties and open sewers. 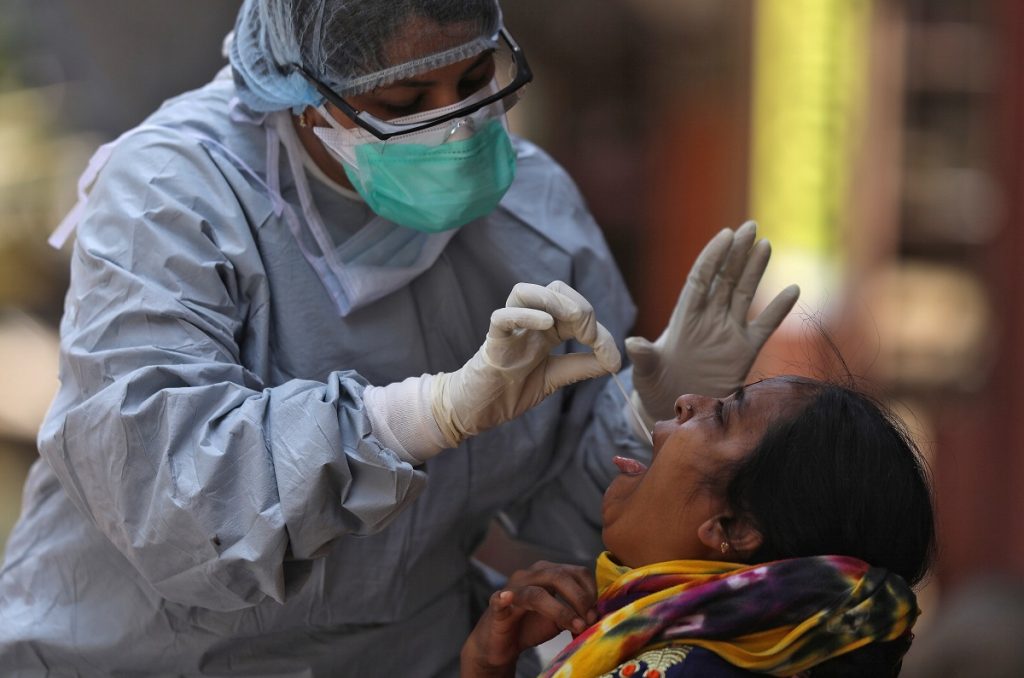 The police allegedly resorted to force to push people into their one-room houses. When some youngsters reacted to this, there was reportedly a minor alteration. “The police were being high handed with the youth here. Some young men, frustrated due to the police’s attitude, chased them out of the gully. It was a small incident but some media reports presented us as uncouth, uncivilised beings who were not cooperating with the state,” Kutty, a community activist says.

Besides a few stray incidents, Shinde says since Dharavi has a strong community group, relief work, and lockdown has both been carried out well. The ‘Mohalla committee’ of Dharavi has been working closely with the two police stations—Dharavi and Shahu Nagar—to ensure that the health situation and the law and order situation in the region are under control.

As of Friday, Dharavi has 29 cases of COVID-19 and the disease has also taken the lives of four people. Considering the density of the region, Shinde says the situation can go out of hand. “But as long as the local bodies are willing to cooperate with the residents here and have a holistic approach towards people, the situation can well be under control,” he says.