Watch: Voices From a Pro-CAA and an Anti-CAA Rally in Mumbai

At the pro-CAA rally, the word 'liberals' was used in the same breath as 'jihadis'. Police and mob brutality was equated to a disobedient child being hit by their father or elder brother. 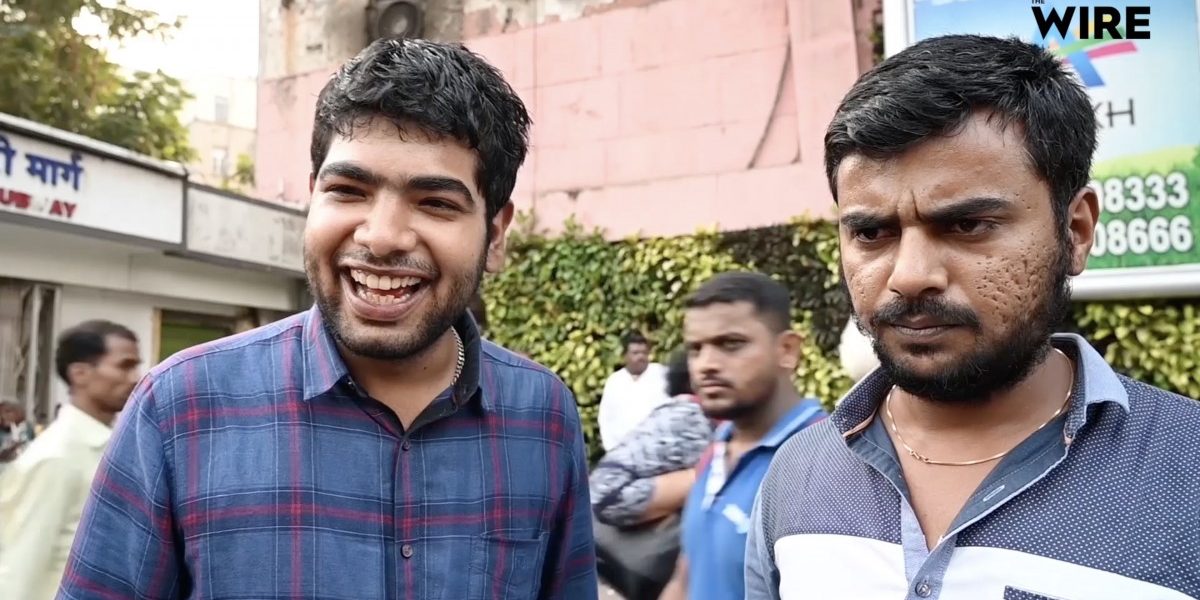 On December 19, I called my colleague Suraj and said, “Everyone will be covering the ‘India against CAA’ protests. Let’s go to the ‘India supports CAA’ rally.” He thought it was a good idea.

We wanted to understand the thought process of people who actively support the Citizenship Amendment Act (CAA). We spoke to 15 people at opposing protests happening in Mumbai on the same day. Rather than presenting snippets of provocative views, we decided to include all the interviews and more context for the respondents.

The day before, messages circulated informing people who were attending the anti-CAA protest to avoid getting off at Churchgate Station. A pro-CAA rally was being held there, less than 4 km away from August Kranti Maidan. At 3 pm we were the only ones amidst on-duty and undercover police, who were prepared with batons, helmets and roadblocks. They repeatedly told us to leave and that no protest had been authorised due to the location’s proximity to Mantralaya.

Unconvinced, we waited until 5 pm when a crowd with printed banners started gathering outside Churchgate Station. They quickly secured permission to hold the pro-CAA rally outside Victoria Terminus instead. The messaging throughout was that this is a people’s protest, not an event organised by any political interest group. The demographic was what I assumed it would be, mostly Hindu men.

One interviewee seemed embarrassed when I asked him to show us his poster. He requested us not to film while he showed it to us. It read, “I am a Muslim. I support CAA.” He had planned to give it to a Muslim but admitted that none had showed up.

Common themes spoken about in support of the CAA were providing relief to minorities facing religious persecution in Muslim countries and an overall endorsement for the Bharatiya Janata Party’s policies. Contradictions between Islamophobic expressions and reassurances for “our Muslim brothers living in India” were apparent. The word liberals was used in the same breath as jihadis. Police and mob brutality was equated to a disobedient child being hit by their father or elder brother.

At 7 pm we reached Grant Road Station, where many young people and women were on their way home from the protest. Before speaking to anyone we spent some time looking out below onto the streets, acknowledging the historicity of the present moment. What we witnessed was uplifting and terrifying at the same time. Seeing Mumbaikars take to the streets in such large numbers was a positive change.

Suraj and I have worked with children whose everyday lives are affected by the consequences of communal violence and religious intolerance. As professionals in the social sector, we are acutely aware of systemic injustices and inequalities that exist across India. However, tensions between these two emotionally charged protests forced us to confront the seriousness of the crossroads our country is at.

People we spoke to at the anti-CAA protest were there for varied reasons but two distinct feelings were palpable. These were fear due to the loss of identity and mourning at the death of the secular ideal. Interviewees, like the woman from Arunachal Pradesh who demanded freedom from being treated as a second class citizen, and onlookers gave voice to what it means to be a minority in this country.

Citizenship is how the nation state defines your relationship with the country. As contestations over the Citizen Amendment Act and National Register of Citizens flare across India, we are reminded that this relationship is constantly being redefined. Some explanations of this relationship between individuals and the state may demand devotion and self-sacrifice. Citizenship might demand that our national identity come before other identities. Alternative explanations may interrogate such obligations, creating room for more individuality and autonomy. Documentary filmmaker Anand Patwardhan illuminated this difference in approaches by saying, “Only by making good relations with our neighbours can we avoid war and spend our resources to feed our hungry and clothe our poor.”

Attending both protests gave us the opportunity to understand and engage with multiple meanings and perspectives, beyond our filtered social media feeds.

Based out of Mumbai, Suraj Katra works as a communications consultant and photographer. He uses the camera for inquiry and to communicate human-centred narratives. Currently, he is engaged in a project that documents water inequity in the city.

Nikita Parikh is pursuing a masters degree Tata Institute of Social Sciences’ School of Education in Mumbai. She works with marginalised Muslim children who do not have access to basic rights like clean water and quality education due to discriminatory and divisive politics.