Although the sit-in protest has been peaceful, Mumbai police have registered FIRs against over 300 women and served notices to a dozen for assembling “unlawfully”.

Barira, one of the protestors at Mumbai Bagh. Photo: Sukanya Shantha/The Wire

Mumbai: A young woman, in a moss green burqa, enters a barricaded space inside Morland road in South Mumbai. A policewoman, in plain clothes, rushes behind her and insists on seeing her identity proof. An argument ensues. The woman, refusing to divulge any information says, “Protester likho (mention me as a protester).” “Yeh ladai kaagaz ke khilaaf ki hain, aur yahi par humaari profiling kar rahe ho (This struggle is against the demand for documents and you have begun profiling us right here),” she retorts.

This has become an everyday scene at the protest site in the Nagpada area of Mumbai, now rechristened as ‘Mumbai Bagh’. The protest here is styled around the sit-in protest organised at Shaheen Bagh at New Delhi.

On January 26, when over 150 women, mostly belonging to the Muslim community, had gathered to protest against excessive police force by the Delhi and Uttar Pradesh police against anti-CAA protests, they were hopeful that the Maharashtra government would be empathetic towards their demonstration. A fortnight later, and with over 500 women joining them everyday, most feel rather let down.

For a peaceful protest, confined to the inner lanes of Nagpada’s Morland road neighbourhood, the police’s decision to register an FIR against over 400 women is “excessive”, most of them told The Wire. The police have been serving them notices under section 149 of the Indian Penal Code (IPC) for assembling unlawfully on a daily basis.

Tahera, a woman in her mid-50s, has been coming to the protest site right from the first day. Her three daughters join her as well – before and after their college hours. The police have identified her as one of the “illegal protesters”, who has been assembling unlawfully at the protest site and have served her a notice under section 149 of the IPC.

But Tahera is nonplussed. “When we stepped out of our houses, we left all our fears behind. These notices mean nothing, really. But it is disappointing to see how the state police have responded to our act of resistance. One wonders if they are any different from BJP-led states,” she said.

Among many protests that have been organised across India, those held in BJP-governed states have seen a higher occurrence of violence. Over 30 persons have died in police firing so far. The Maharashtra government, led by a tri-party coalition of Shiv Sena, Nationalist Congress Party and Congress, has opposed the imminent implementation of the nationwide National Register of Citizens (NRC). But their response to the protests has not been very encouraging.

At Mumbai Bagh, the Mumbai police have not spared even the street hawkers and water suppliers who have been providing food and water to the protesting women. Notices have been posted on the outer walls of the houses of two families that had extended support to the protesters and allowed the protesters to store food cartons in their compound. The notice has called them a part of the unlawful assembly too. “Basically, they are profiling everyone who is entering this space. It is outrageous,” said 29-year-old Barera, a Nagpada based tuition teacher.

“This protest, since day one, has been peaceful. We are here to express our solidarity with the women of Shaheen Bagh and several other students and individuals fighting the police and state atrocities. While the beginning of our protest passed without any hassles, the police started profiling each of us slowly after a week,” said a young woman, Mariam, as she showed several notices that she has gathered over the past three days.

Fearing arrest, many women have refused to accept the police notice. Some are even seeking legal help to understand what can be done in such a situation.

Information like an individual’s name, address, occupation, place of work, organisational and political affiliation – everything gets noted down. A police constable, who identified herself as Suvarna Mane, insisted that this reporter too provide her name and residential address and, when the reporter refused, another policewoman took pictures on a phone. “We have been given instructions to note down information about everyone who comes here,” Mane said.

The Nagpada police, last week, registered an FIR under Section 341 (punishment for wrongful restraint) of the Indian Penal Code after assistant municipal commissioner Alka Sasaane filed a complaint. The reason, as stated in the complaint, was blocking the municipal corporation from continuing its work of road repair. The protesters say that for the past seven months, no work has been carried out on this stretch and it was chosen as a site of protest for precisely this reason. 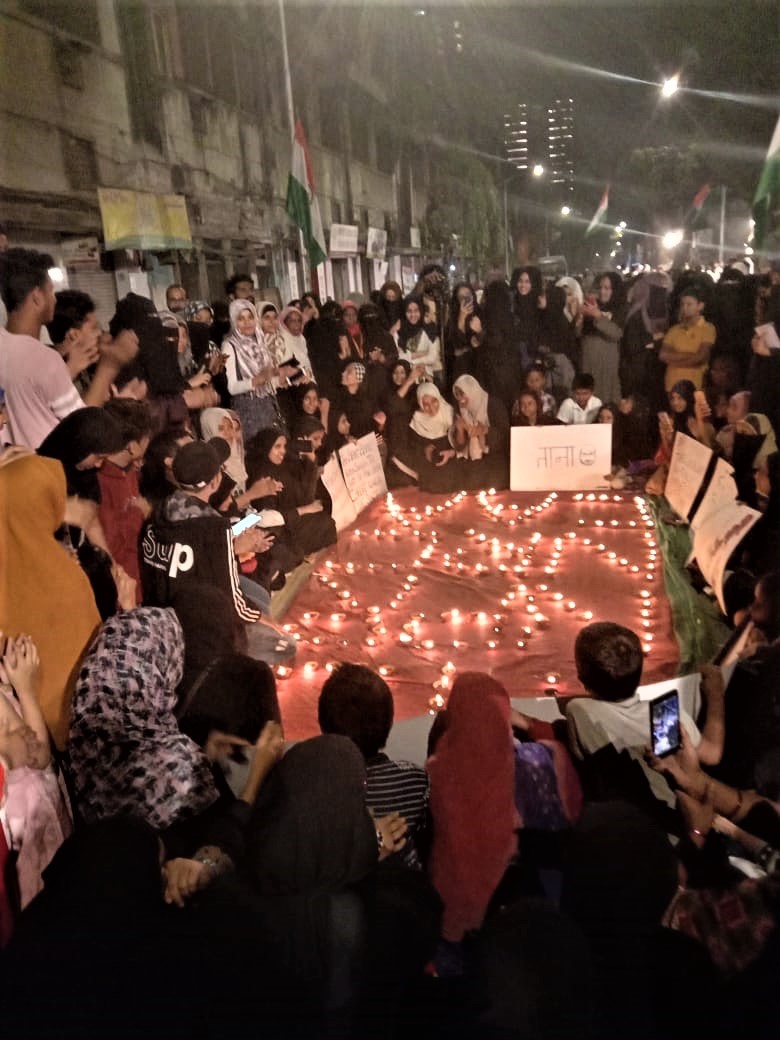 The Wire tried to contact Shalini Sharma, the senior inspector of Nagpada police station, a couple of times. But Sharma did not respond. The story will be updated if and when a the police respond.

While most shop establishments, marriage halls, and other residents extended their support to the protest, the police have claimed that the BEST office next door has raised an objection. The Wire tried to independently verify these claims, but couldn’t.

After the Supreme Court on February 10 observed that protesters can’t block roads indefinitely, the protesters at Mumbai Bagh approached the municipal corporation officials to extend their support for the ongoing work on the road in the vicinity. “Our intention was never to cause any inconvenience ever,” a protester said.

Even as the police continue with their intimidations, women here are resolute. Barira says she is no more a teacher, teaching students’ nursery poems like ‘twinkle, twinkle, little star’. “They are learning songs of revolution now. Children as young as five and six want to know what ‘Inquilab Zindabad’ means,” she said, between chuckles.

Barira says it is important to recognise that her community women didn’t pour onto the street when Ayodhya verdict was announced and neither did they protest against the triple talaq law, which directly criminalised men of her community. “Not that it did not hurt us. But that was different and this is very different. This is about our constitution and we couldn’t have stayed silent,” she says.

“I am particularly glad that the narrative is changing. Muslim women are no more looked at as naïve, apolitical, bachche paida karne waali machine (children birthing machine). We are carving our own future. We are creating history in every town, in every city,” Barira feels.

Several tall posters of Dr. B R Ambedkar have been put up at the protest site. Photo: Sukanya Shantha/The Wire

This space too has been transformed. Savitribai Phule and Fatima Shaikh both pioneers of the Bahujan formal education have emerged as their guiding force. Their posters stand out tall, along with a humongous poster of Dr B.R. Ambedkar.

In the past three decades, Mumbai has seen a drastic change, demographically. The demolition of the Babri Masjid and the subsequent riots in Mumbai pushed the community into ghettos. Several spots in the city have sprung up as “Muslim areas”. Nagpada is one such.

But as the protests began here, several women from different localities, and from across communities, came forward to express their solidarity. They did this, despite the possibility of being booked for unlawful assembly. One such supporter is a 20-year-old literature student, Anjali, from Pune. Anjali has been attending the protest for a few days and says since her “appearance” clearly suggests that she is an outsider, the police have been keeping a watch on her. “That is really a small price one can pay for such a big cause,” she says.

Students groups have been active participants in the protest. Wall graffiti, posters and banners have come up overnight. Some by the locals, some by the students of the Tata Institute of Social Sciences and Mumbai University. Sikh community volunteers have been visiting the protest site and reaching out to protesters, offering to help them with food and other support.

Fiza and her friends attend college in the morning and head straight to Mumbai Bagh in the afternoon. Fiza sits in the middle of the protesting women and manages to finish her college coursework in-between. At one corner, a mother helps her daughter complete her school homework. “Her quarterly exams are going on. But she doesn’t mind sitting here and studying,” the woman said. 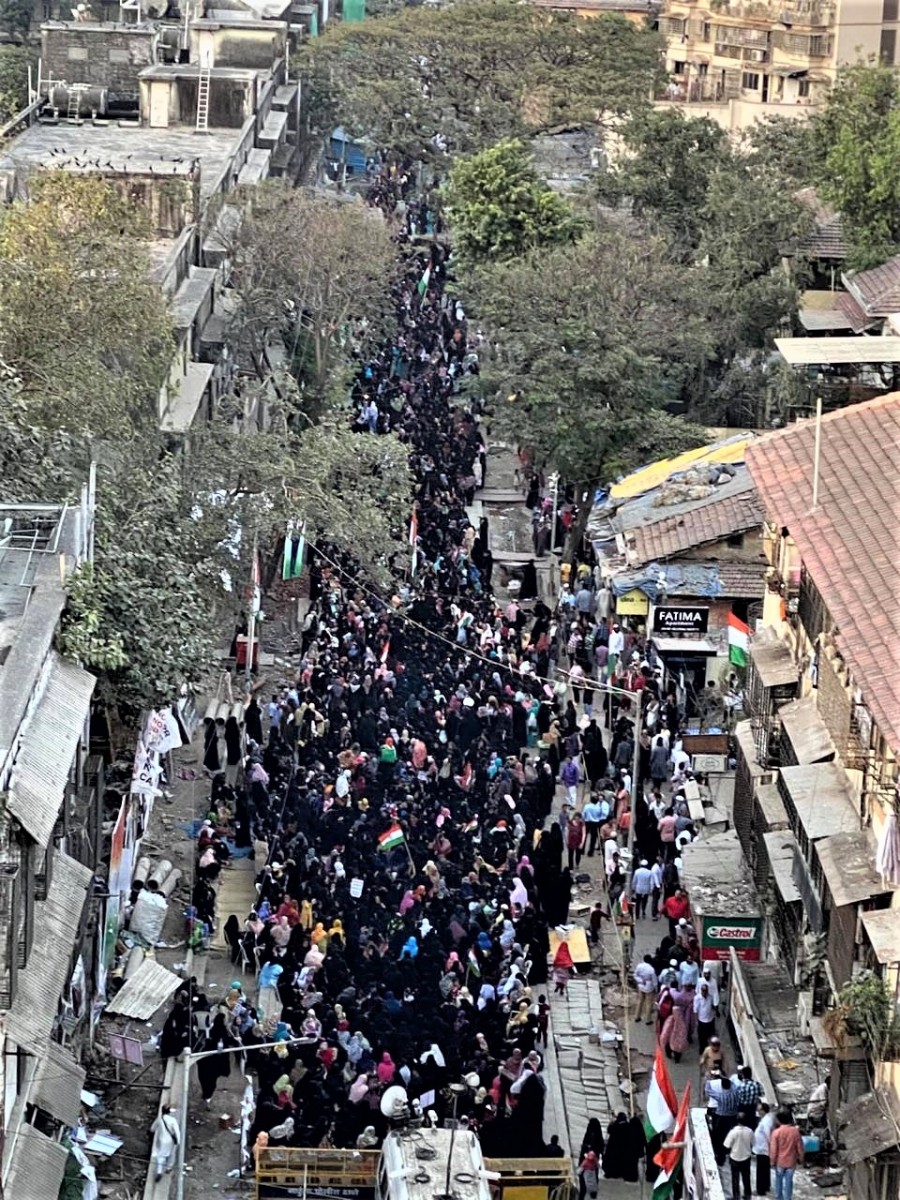 As the day progressed, news of the police allegedly lathi-charging students at Jamia began to trickle in. The WhatsApp group of Mumbai Bagh protesters began buzzing with videos and the latest news updates from there. In a matter of minutes, the women decided to observe a protest in solidarity with the students who faced police brutalities. “Every evening, we have new concerns to raise. I hope the government will understand our plight someday. Until then, the protest will go on,” Fiza adds.