MP: Man Beaten up With Hammer for Eloping With a Woman, Police Arrest 2 Accused and Victim

A video of the incident shows two men, who are the woman's father and brother, beating up the victim in the middle of a busy street in Maksi city during the day. 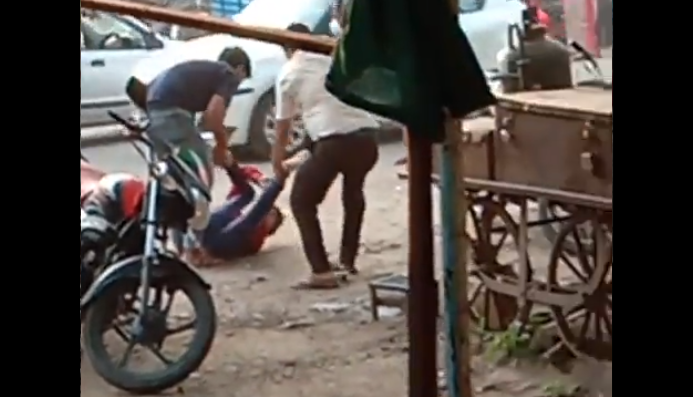 New Delhi: A 22-year-old man was brutally beaten up with a hammer in Madhya Pradesh’s Shajapur district for eloping with a woman, NDTV reported.

According to the report, a video of the incident shows two men, who are the woman’s father and brother, beating up the victim in the middle of a busy street in Maksi city during the day.

The victim, Pushpak Bhawsar, and the woman were in a relationship and they had eloped recently. Both of them were residents of Maksi. But they returned to their families and reached a compromise.

However, the woman’s father and brother, allegedly angry over the affair, on Sunday confronted the man in the market and hit him on his hands and legs with the weapon.

A 22-year-old man was brutally beaten up in Shajapur The woman's father and brother, allegedly angry over the affair, on Sunday confronted the man while he was out in the market and allegedly started beating him up with hammer-shaped rod. pic.twitter.com/GTrQ9JvMKp

Despite the attack on the victim, the Maksi police registered cases against both the accused as well as the victim Pushpak Bhawsar under various sections of the Indian Penal Code.

Therefore, Bhawsar’s family and members of the Bhawsar community reached the office of the superintendent of police and submitted a memorandum over the case.

In India, for an elopement to be valid and legal, it is necessary that both the parties involved must be major according to law (minimum age of 21 years for a boy and 18 years for a girl) and the elopement must be consensual. Therefore, in this case, according to law, the act of elopement with mutual consent of the woman is not considered as a legal offence.

So it’s unclear why the police arrested the victim in this case.

“He had gone for a haircut to the market, where the two men reached and dragged him out of the shop. Then they beat him up, hit him on his legs and hands. They had come with the intention to kill him… His hand is fractured and he is critically injured,” a family member of Bhawsar told NDTV.

He added that despite the video clearly showing the accused and the victim, the police registered a case against Bhawsar as well.

Superintendent of Police Pankaj Shrivastava told the news portal that an investigation will be conducted into the incident.