The 'Most Productive' Parliament Session May Also Be the Most Dangerous

It is now abundantly clear that the Narendra Modi-Amit Shah leadership views the emphatic expanded mandate which they seized in May 2019 to be one to remould India into a majoritarian, authoritarian, militarist and amoral Hindu nation. 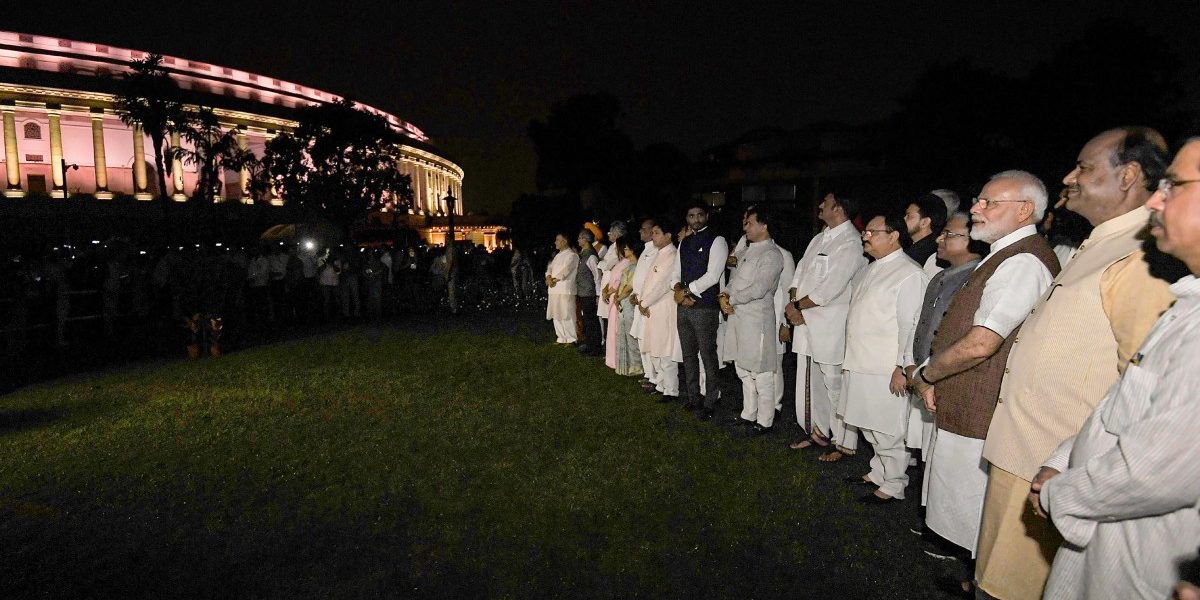 With every passing day, India is changing. You can feel the change in the air everywhere – on the streets, in workplace and family conversations, in parliament, on the internet, in the media. You see the nation being aggressively recast in a new muscular imagination. Some of us watch with cold dread, many others with feverish triumphalism.

Another India, imagined around the values that vitalised India’s freedom struggle and the pledges and guarantees of its constitution, but so imperfectly realised, is rapidly crumbling. There seem to be only a few willing to stand tall in its defence. We are fast becoming a people with no patience for kindness and morality.

It is now abundantly clear that the Narendra Modi-Amit Shah leadership views the emphatic expanded mandate which they seized in May 2019 to be one to remould India into a majoritarian, authoritarian, militarist and amoral Hindu nation. A large part of this project was well under way in Modi’s first tenure, but there was at least a formal acknowledgment of the constraints set by India’s democratic constitutional framework. Therefore, we saw the steady destruction of the constitution by stealth, by a hollowing out and corrosion from within, by a persistent and dangerous chipping away at democratic institutions and practice, by the nurturing of a climate of everyday fear, and the encouragement of public hate.

But since their electoral triumph in May, we see the Modi-Shah regime impetuously setting aside all such pretences. For India’s ruling establishment today, the three greatest enemies of the nation of its imagination are the morality of India’s constitution; its Muslim and Christian minorities; and its Left and liberal dissenters. We are witness now to the open declaration of war against all these three enemies.

There were early signs on display of this new mood of Modi’s second term. The cries of ‘Jai Shri Ram’ spread quickly from the halls of parliament to the streets, a rallying call for lynching which no longer needed to even pretend this was in defence of the holy cow.

Home minister Amit Shah thundered in parliament that his government would extend the National Register of Citizens to the whole country and deport ‘infiltrators’ from every inch of land. It would be a grave mistake to regard this as an empty rabble-rousing threat. Not with the Modi-Shah leadership today. On his first day in office, Shah signed an order enabling all state governments and even district magistrates to establish Foreigners’ Tribunals in all parts of India. He also has asked all states to establish detention centres for identified foreigners.

‘Infiltrators’, in the language of this government, refers only to undocumented Muslims. Because if undocumented immigrants are Hindus, or indeed of any other religious group, they are refugees for whom the Bharatiya Janata Party manifesto is committed to amending the citizenship law to assure them citizenship.

This measure would be a fatal, indeed final, blow on India’s secular democratic constitution. Imagine requiring potentially 180 million Muslim people, or any fraction of them, to produce documents to prove that they are citizens of India dating back possibly to 1950. The monumental human suffering created by the state by threatening its minorities with statelessness, we have witnessed in Assam. Imagine it being extended step by step to other parts of India – possibly border districts of Bengal and the Northeast to start with, possibly big metropolises. This is not a distant dystopia. After the constitutional coup with Kashmir, everything is possible.

We are told that this has been the most productive session of parliament, with more bills being passed than in any session in the past two decades. But it has been productive only in advancing step by step the agenda of the Modi-Shah government. The Budget was lacklustre and uninspiring, and even its figures did not add up. But dodgy data and the stymieing of growth and jobs is not a worry of this government: their mounting loyal electoral support lies elsewhere, in its decisive advancement of its profoundly divisive majoritarian agenda.

Also read: The Ultimate Goal Is a Hindu Rashtra and It Is Now Within Sight

The opposition, if it stood together, could have still halted this juggernaut. Instead they have displayed themselves variously to be confused, still paralysed by their electoral debacle, ideologically shallow, opportunistic or susceptible to both intimidation and inducements.

The Union government was therefore able to push through many of its agendas in this first session of parliament. Probably the most draconian measure yet in the statutes of the country to stifle individual dissent is the amendment to the Unlawful Activities (Prevention) Act which allows individuals to be dubbed terrorists, and not just organisations. This makes every one of us who hold principled positions opposing what this government is doing vulnerable to being called terrorists – whether ‘urban Naxals’ or jihadis.

The Right to Information Act has been carefully diluted by making the terms and tenure of information commissioners dependent on the pleasure of the government which they are supposed to hold accountable. The controversial law criminalising instant triple talaq was pushed through, again without even referring it to a select committee, despite many reservations about criminalising Muslim husbands while being indifferent to women who are abandoned by their husbands of other faiths.

But the clearest signal so far of the resolve of the Modi-Shah government to advance the core agenda of the BJP-RSS ruling establishment at any costs, and to cast aside the secular, socialist and democratic constitution, is the ending of the special status of Jammu and Kashmir in the Indian union simply by a presidential order, and the downgrading of the state to two union territories, after arresting leaders of pro-India political parties and virtually shutting down the state.

That a measure as dangerous, reckless, arrogant, undemocratic and unconstitutional has been accomplished amidst wide popular celebration, unmindful that the last tenuous ties that bind the Kashmiri people with the rest of India are being torn asunder, signals that now everything is possible, and indeed probable, to advance the RSS vision for India. The RSS believes that its time has come.

It is sobering to remember that the RSS never accepted India’s constitution, and initially it rejected even the national flag for carrying three colours, representing India’s diversity. In its core agenda, and that of the BJP, ending the special status of the only Muslim-majority state of India was very high. Together with this, its priorities are to enact a uniform civil code (for which the triple talaq Bill was a major step, and more is likely to follow). A third key goal is the building of a Ram Temple at the site of the Babri Masjid, and again we are likely to see decisive action for this.

Also read: What If This Is the Hindu Rashtra?

All of this, along with a nationwide NRC; the lateral entry of large numbers of officials committed to the RSS ideology at senior levels of government; the destruction of universities as spaces for diverse ideas to flourish and dissent articulated without fear; and further routinisation of hate violence, will together mean the end of India as we know it.

The war against the constitution, Muslim and Christian minorities, and dissenters in Modi’s first tenure was still covert guerrilla action. Today, with home minister Shah by his side, the civil war is out in the open. India’s decimated and divided opposition still has one more chance to regroup and fight back. Else history will not forgive India’s entire political class.

But regardless, India’s people will fight back. Too much is at stake. Most of all, the idea of a country where we all belong equally, in which we can all hold our heads high without fear, and in which decency, justice, kindness and morality still survive, endure and, one day, overcome.