Of Tokenism and Misplaced Trust: How BJP Uses the Kashmiri Pandit Card

The BJP has always had a two-pronged approach to dealing with the Kashmiri Pandit issue – of highlighting their plight at the Centre and mocking them in Jammu. File photo: A Kashmiri pandit holds a lighted earthen lamp as he prays during an annual Hindu festival at a shrine in Khirbhawani, 30 km east of Srinagar, May 31, 2009. Photo: Reuters/Danish Ismail

Falling for BJP jumlas, in 2014, several Kashmiri Pandit organisations gave a call to the community to support the party in its ‘Mission 44-plus’. Addressing a rally in Samba in December that year, Prime Minister Narendra Modi vociferously pledged to facilitate the homecoming of Pandit refugees during his tenure.

Fast forward to June 2018, the criminal silence maintained by Modi on the issue during his recent visit to Jammu and Kashmir has irked many such organisations. One may assume that his backing out from his commitment emanated from the alleged abstinence of Pandits from voting for BJP in 2014, as was decried by Amit Shah in January 2015.

This is hardly surprising considering the party has retreated from more than one commitment, perhaps with the exceptions of a few corporate houses.

Drawing its verve from the Rashtriya Swayamsevak Sangh, the party has a legacy of keeping a good reserve of political fodder – portions of which are doled out in times of political expediency. When the party is looking to sway political opinion, it has a knack for raking up controversies, both old and new.

The Kashmiri Pandit exodus is a card that the BJP has been playing since the exodus itself. But a serious reading of the facts exposes the party’s treatment of the issue as a smaller picture of the larger frame that is the Kashmir issue.

The pertinent question here is: why did the Pandits fall for it in the first place? For any keen eye, the answer is clear to see. The BJP, RSS, and other similar organisations found the question of their rehabilitation a blessing for their divisive politics. Interestingly, the issue, along with the scraping of Article 370, has always found a place in the election manifestoes of the BJP. Contrarily, the Kashmiri Pandit rehabilitation issue has never figured in the election manifestoes of the Congress, something that has given Kashmiri Pandits, who have traditionally supported the part, a sense of having been left out. This is partially why treading on the heels of the BJP seemed to be the only option.

Now that the 2019 general elections are just around the corner, BJP may possibly use the same old rhetoric to touch a raw nerve again.

From the beginning, BJP and its associates have adopted a two-pronged policy – of highlighting the issue at the Centre and mocking the Pandits in Jammu.

The party made a “messianic” entry into the body politic of desperate Kashmiri Pandit émigrés when the RSS, founded and funded the Panun Kashmir, an organisation of displaced Kashmiri Pandits. Moreover, ABVP, the student wing of the BJP, pushing forward the agenda of jettisoning Article 370 and rehabilitation of refugees, even organised the ‘Save Kashmir’ campaign. A 10,000-strong volunteer contingent made an unsuccessful bid to march up to Lal Chowk and hoist the Indian tri-colour there.

Although unsuccessful, the attempt was instrumental in winning them a considerable number of converts from among the community. However, the realisation that the exodus was not temporary changed several things, both for the émigrés and those who hosted them in Jammu, particularly in economic terms.

As scores of refugees poured into Jammu, the initial welcome turned into panic due to a general apprehension among the locals that “intelligent as the Pandits were, they might edge out locals from the jobs, particularly the government ones”.

When 90 migrant medical students were re-admitted to the Jammu Medical College, local students went on a two-week strike. Backing the strikers, then BJP state secretary Ashok Khajuria asserted that the Pandits could live in Jammu “only as guests” and could not be allowed to settle there “at the expense of our children”. 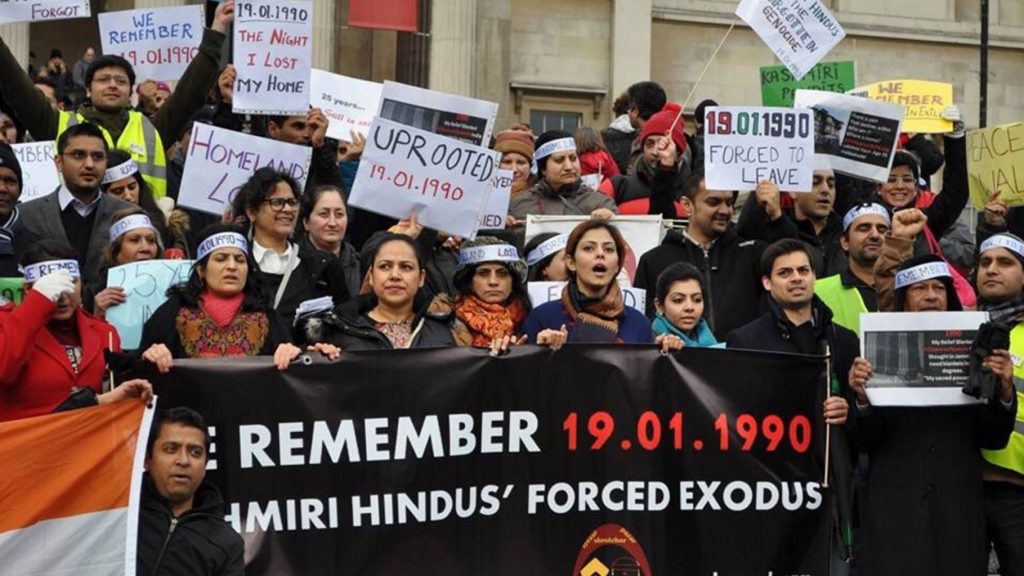 The Kashmiri Pandit exodus is a card that the BJP has been playing since the exodus itself. Credit: PTI

He warned the governor and Union home minister Mufti Sayeed against a further influx. Holding them responsible for their own exodus, the BJP secretary shamelessly claimed that “they took the lion’s share of the cake there [in Kashmir]… they would do the same here”. In fact, when governor G.C. Saxena laid the foundation of a building in Jammu for housing the refugees, agitated BJP leaders had to be assured against the permanency of the accommodation.

In Maharashtra, while the RSS and Shiv Sena provided basic facilities to Kashmiri Pandits, Sena workers in Jammu actually mocked them in different ways. In one such incident, they put dijihurs, a gold ornament worn by married Pandit women, on a dog. From rent hikes by landlords to chasing away of Pandit kids from ‘Dogra-owned’ cricket pitches, the refugees had to face all kinds of ordeals. The intra-community tension was particularly manifested in a song sung by local Jammu youth: “Haath main kangri/kandhe pe jhola/kahan se aye yeh Kashmiri Lola?” (A brazier in hand/a cloth bag slung on the shoulder/from where have these Kashmiri refugees come?).

Perhaps some Pandits feel solace in the rhetoric that purportedly answers the provocative sloganeering of Islamists in the Valley. Although the BJP has failed them at the grassroots level, except for creating a handful of jobs, the association with the party seems to be a part of revenge politics.

Even the state government has done nothing substantial apart from passing resolutions and establishing a few enclosed ghettos and proposing satellite colonies in the Valley. These colonies, in most cases established close to army camps, are seen as an extended symbol of the Indian state, thereby creating further hurdles in developing bonds between the two communities.

Similarly, the mesmerising rhetoric of the BJP-RSS and the attention-seeking, hate-mongering “debaters” on sensational news channels are distancing them further from finding common ground with Kashmiri Muslims.

Crucially, there is still a generation of people alive in the Valley who have memories of a shared past and emotional bonds with the Kashmiri Pandits. Any further delay that even the next generation will harbour the ill will that has been sown even as various quarters continue to lure more people into a cycle of hatred.

Amir Sultan Lone and Suhail-ul-Rehman Lone are researchers with the Centre of Advanced Study, Department of History, Aligarh Muslim University.