While those in charge are doing whatever they can, most people put up at the Yamuna Sports Complex say they want to go home. 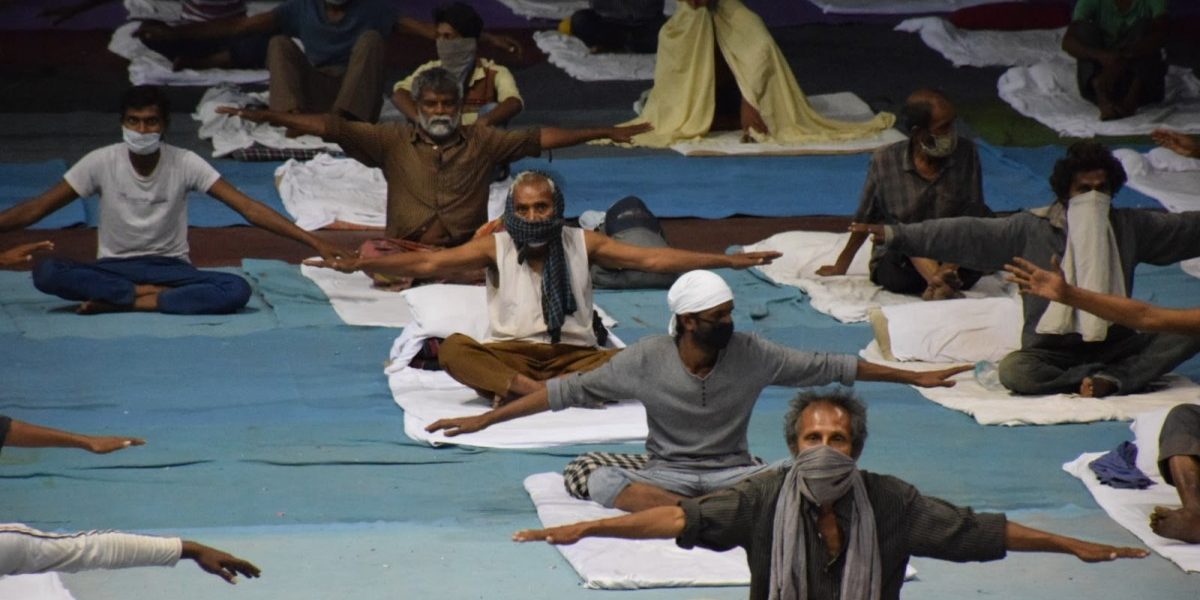 Migrants do yoga at the Yamuna Sports Complex.

New Delhi: A usual day at the Yamuna Sports Complex, which has been converted into a temporary shelter home for distressed migrant workers and daily-wage earners during the national lockdown, begins with a yoga class. It is followed by a magic show, which is also an awareness campaign about COVID-19 for those who cannot read.

After the total lockdown was announced by Prime Minister Narendra Modi on March 24, there was a mass exodus of migrant workers and daily-wage earners from cities across the country, all trying to make it home to their villages. Some managed to reach home, while others were stranded on the way. 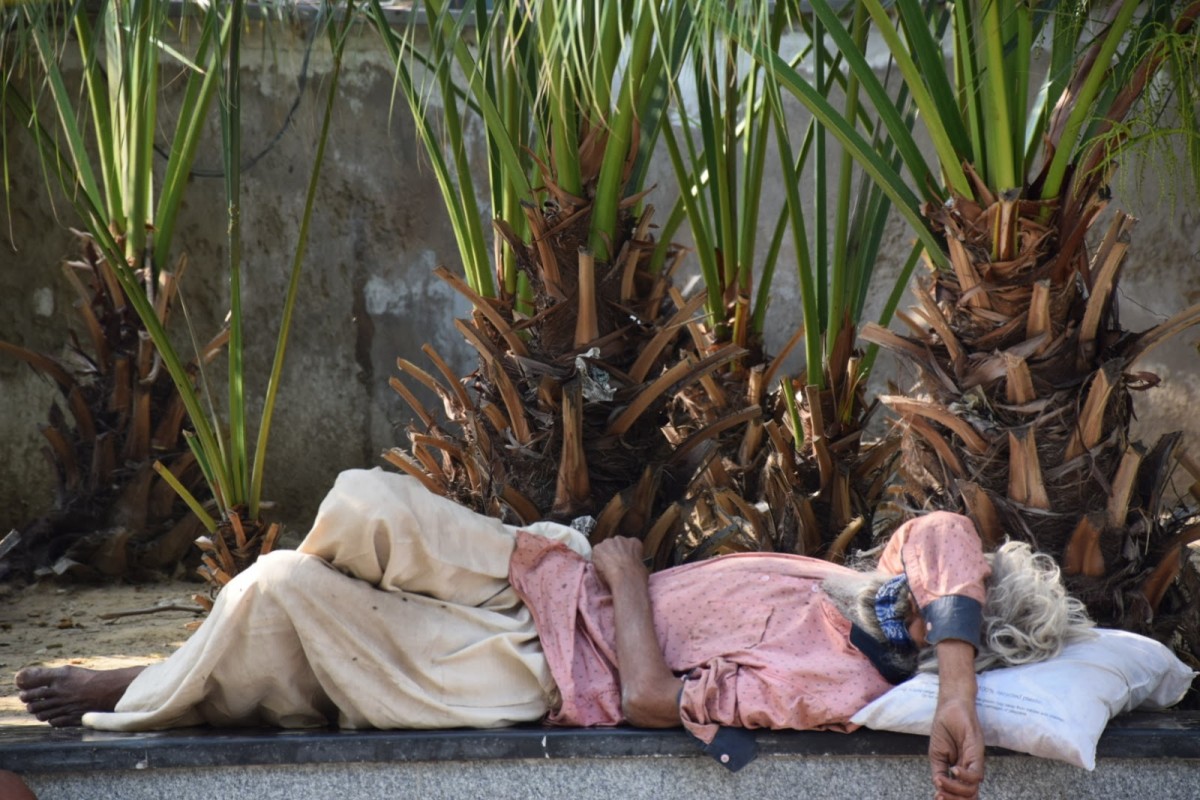 A migrant sleeping next to some plants.

Those who were found stranded in Delhi were brought to this complex, converted temporarily into housing for those in need. The huge stadium has multiple halls, with ample space and greenery outside. For many living at this centre, it is the “first time they have resided in such a beautiful place”.

But the huge halls, greenery and fun activities designed to distract the jobless migrant workers aren’t helping. Their desire to earn money and go back to their hometowns is still strong. 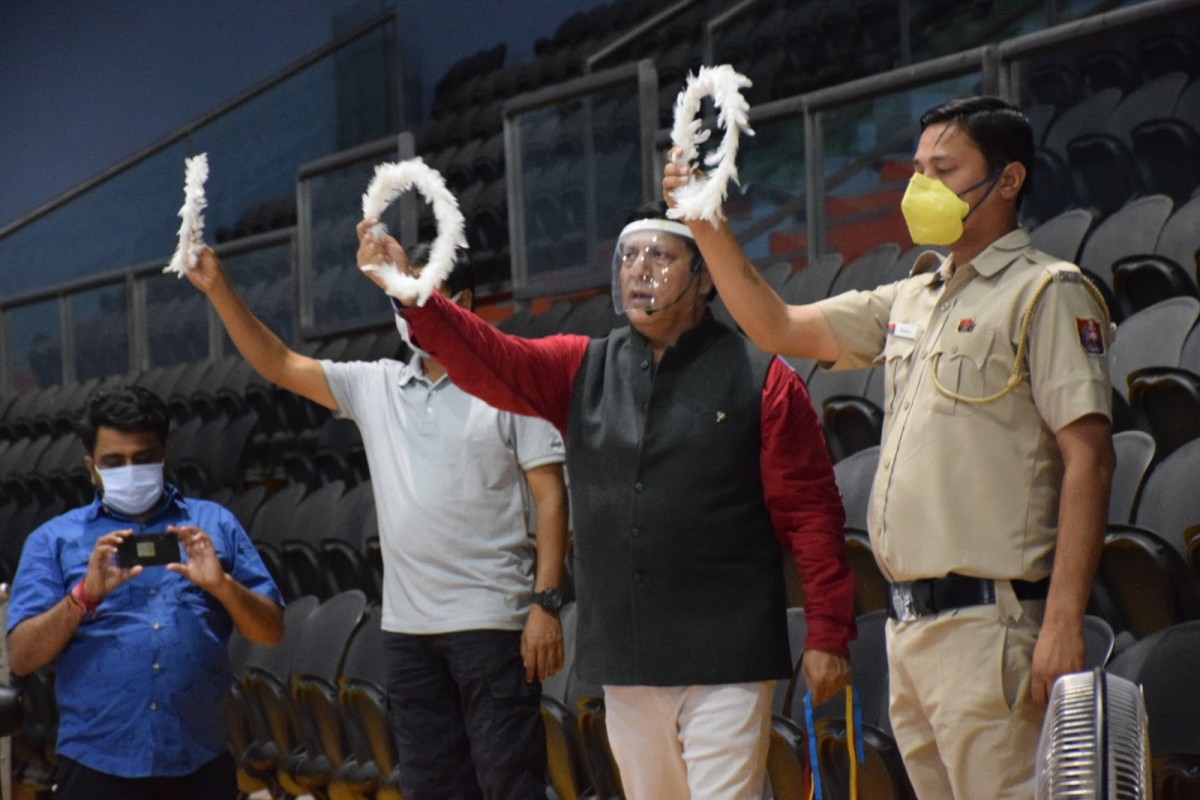 A magic show put up for the migrants.

Bablu Yadav, a resident of Mau district in UP, used to sell beauty accessories in Delhi’s Chandni Chowk at a small kiosk before the lockdown was announced.

“Suddenly, when the lockdown was announced, everything stopped for us. There were no vehicles to go back home and no work to do here as the market had been shut down. That’s when I was trying to go back home on foot, and was found by the police. They brought me here. All the leftover accessories that I had to sell will rot at home. Once I am out of here, I will have to start my work from scratch,” Yadav said. 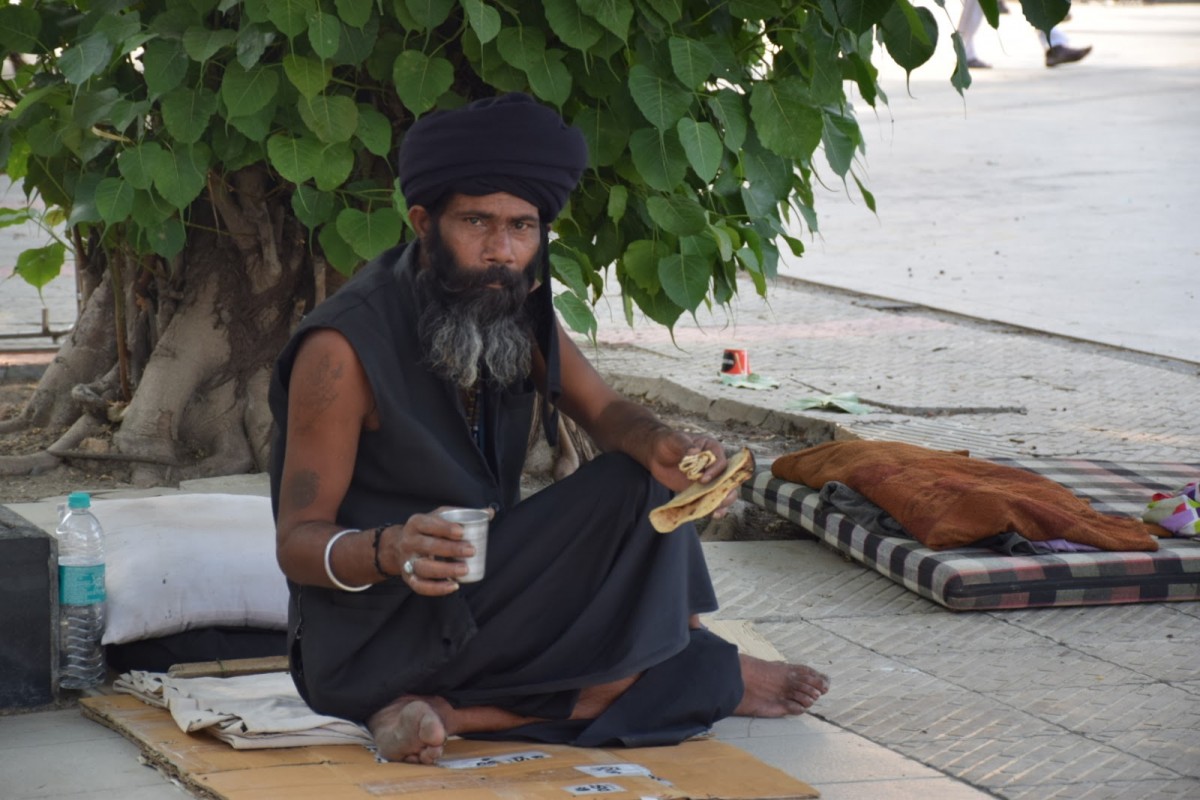 A man eats breakfast at the shelter.

Speaking about the problems he faced at the facility, he said, “There is a lot of issue with the toilets. We have to wait in long lines because there are about 1,000 people here, and only a few toilets. Sometimes there is no water also. There is no proper cleaning and I have found broken bottles. It is also the fault of the residents for making it dirty.”

Also read: Are We Headed For an Exit, or For Lockdown 3.0?

For about 1,000 people, there are four makeshift toilets that have been arranged away from the hall. However, the toilets for the staff are separate, and inside the building. There are no separate toilets for women.

“At least we are getting some facilities here, had I been outside, I would have starved due to a lack of money,” Yadav added. 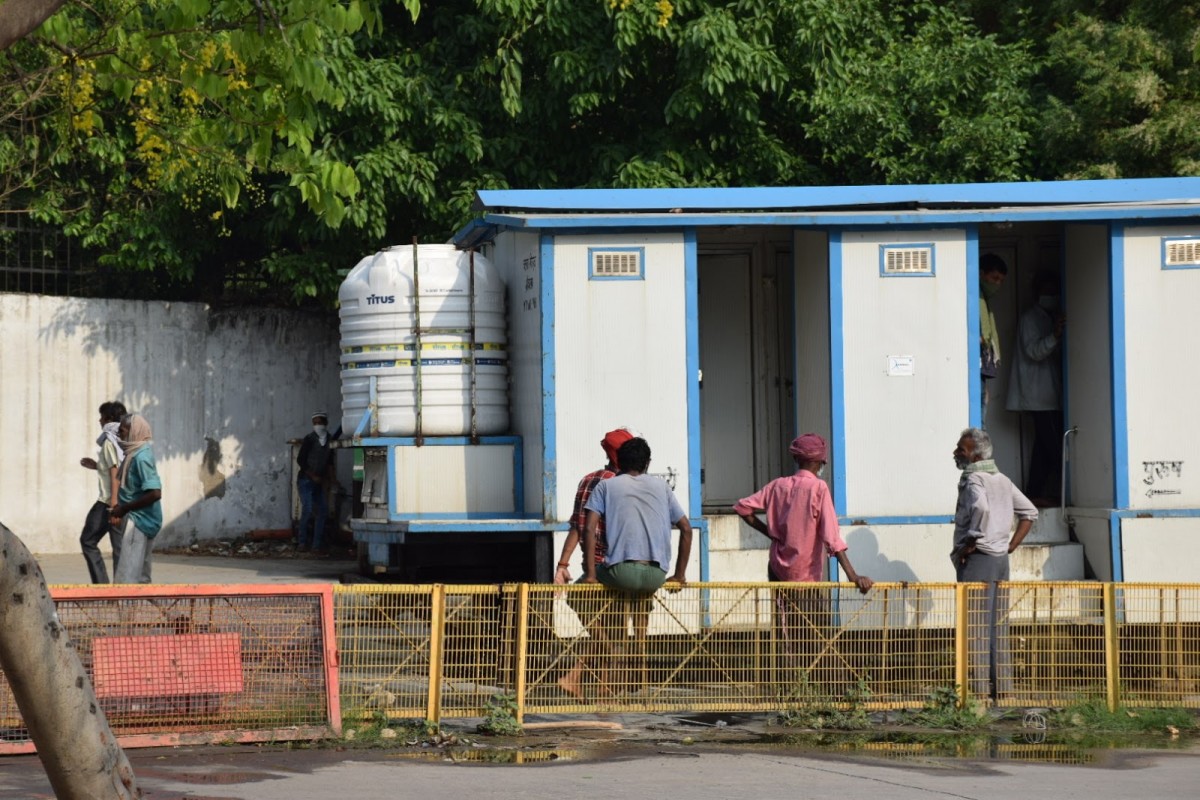 Makeshift toilets for the workers.

As of Wednesday, according to an official, there were about 970 people in the complex. Among them are also cancer patients, tuberculosis patients and people with mental disabilities. “These were people we found stranded on the roads with no work or money, so we brought them here,” said a police officer on duty.

Azad, a 22-year-old man, was a rickshaw puller in the Chandni Chowk area before the lockdown was announced. With no work thanks to the lockdown, he found himself forced out of the room he rented as he couldn’t arrange for the rent money. He was stranded on the lanes of Chandni Chowk when he was picked up by the Delhi police and brought here.

“For everything, we have to stand in long lines. Be it toilets, for tea, food, or even water. There are too many people and too little staff. Every evening, we get stale potato curry,” he said. 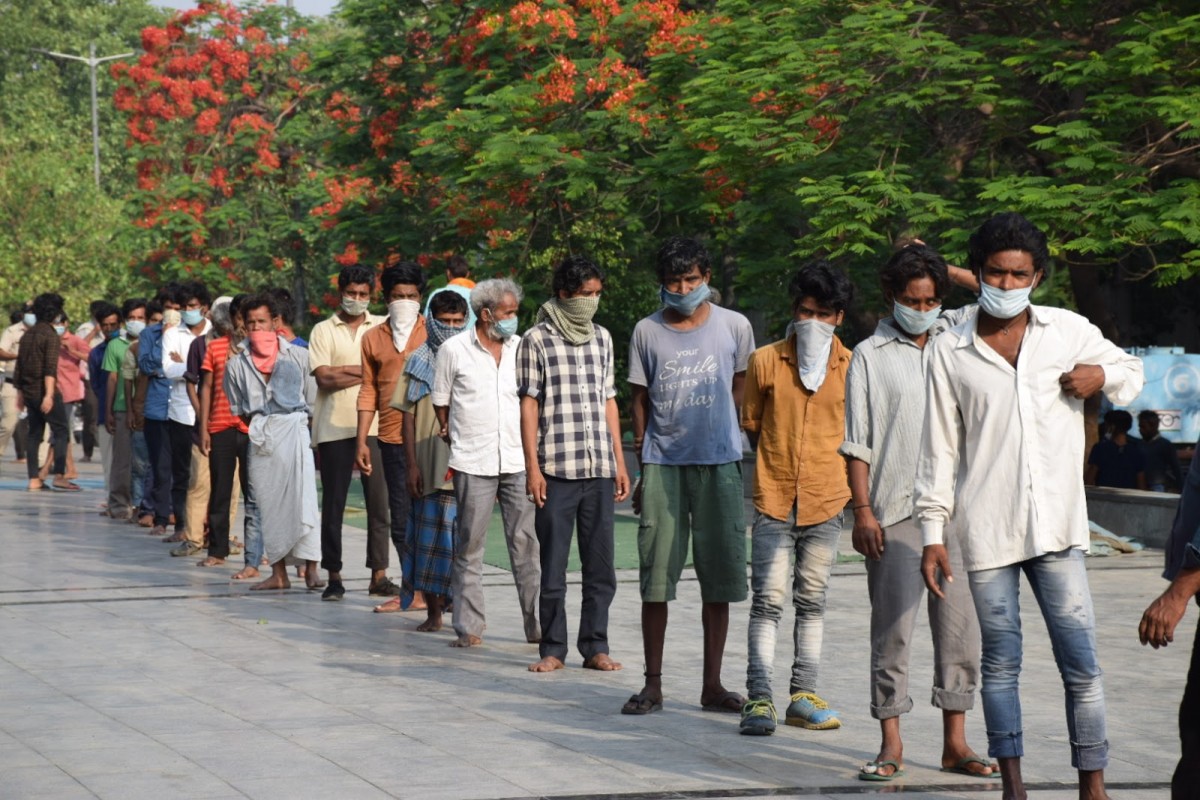 People standing in long lines waiting for their morning tea.

Kampi, a resident of Etah who drives an e-rickshaw in Delhi, had different concerns.

“There are too many people here. We stand in the same line, waiting for our turn to get food, tea, water, to use the toilet etc. What if somebody at this centre is infected with coronavirus? We will all get sick then,” he said. Even though Kampi didn’t exactly know the term “social distancing,” which was advocated by the prime minister, he seemed to have a clear idea about what it meant, and the consequences of not following it. 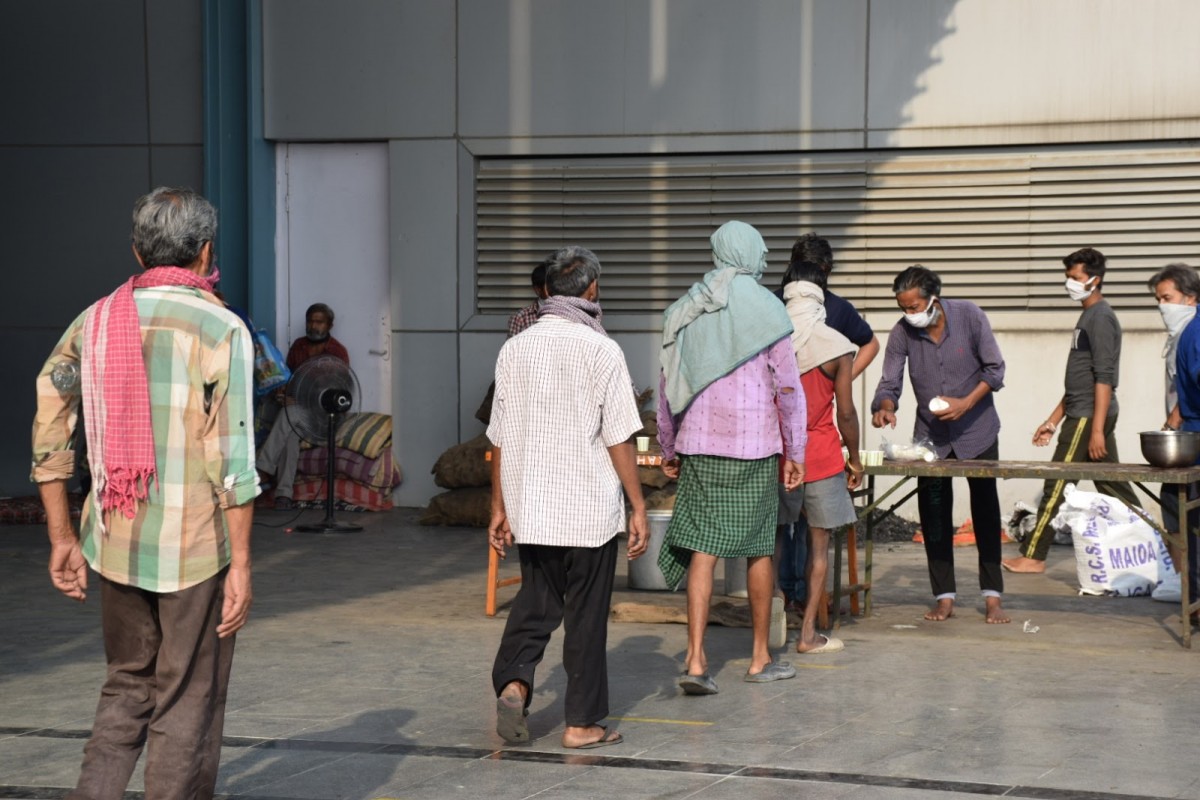 Tea being distributed at the complex.

Mohommad Sahil, a resident of Bareilly, used to work in the cycle market of Chandni Chowk before he was brought to this facility. “They [police] fed us a meal, sat us inside the bus and brought us here. They said we will get food here. But I want to go home, I would rather eat bad food at home, no matter how little, but I want to go home.” 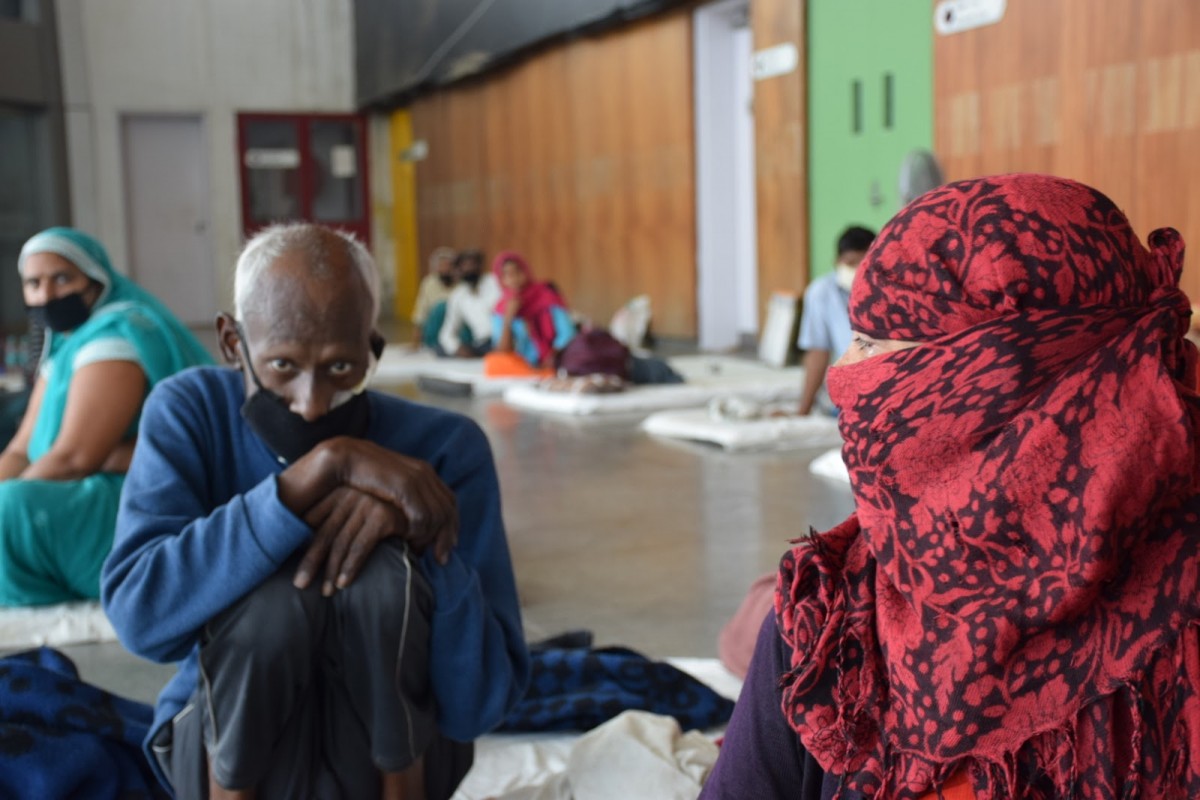 Cancer patients among the inhabitants have been given a corner to sleep in.

Rajkumar, a resident of Gopalganj in Bihar, was brought to this centre on April 12.

He said, “Even though we are getting food and other facilities here, it would be better for us to go home. Our work has stopped. I have suffered huge losses. I have five other family members, and I took care of them by earning on a monthly basis. If I got out of here, I would at least try and reach my family.”

There are about 15 cancer patients in this facility, who have been given a separate space to live in. 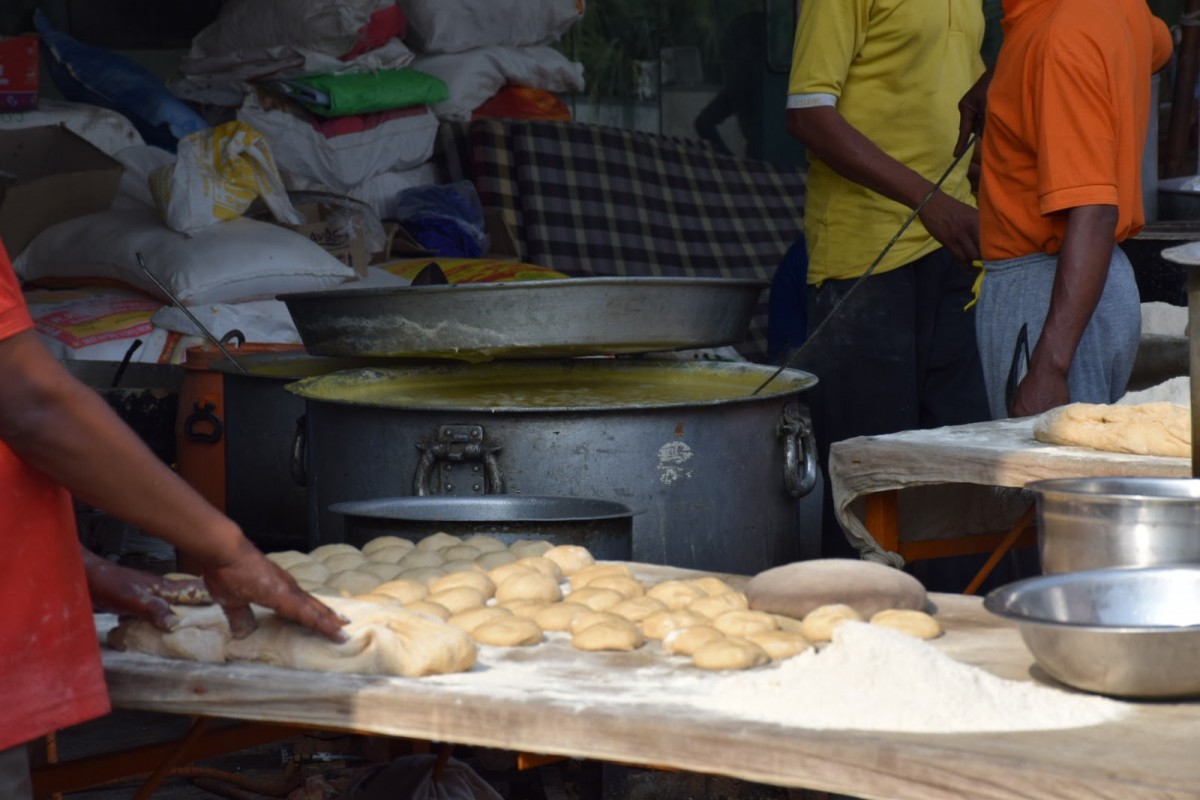 Food being prepared at the shelter.

Ranauti, an elderly woman from UP’s Mau district, had come to Delhi with her cancer-stricken 25-year-old son for treatment in Delhi’s GTB Nagar Hospital.

“I came to Delhi four months back with my son for his treatment. He has mouth cancer. But since the lockdown, we are just stuck here. He is not getting his treatment, and we are far away from our home for no reason… if he had been getting medical treatment, it would have been still fine. My husband is also stuck in Meerut, away from home. Neither of us are there with our children and grandchildren in this difficult time. I just keep thinking about going home all the time,” she said. 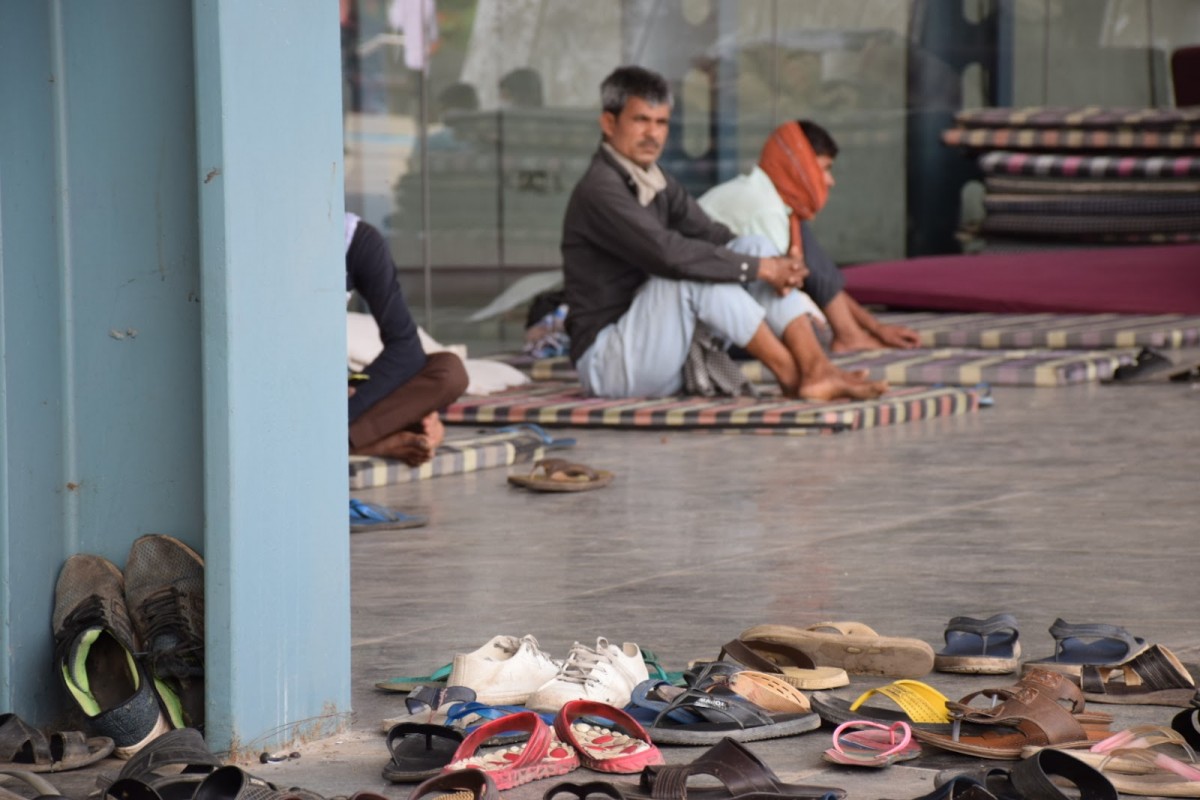 There are about a thousand people in this complex.

Meera sits next to Ganesh, her husband, who is an ailing cancer patient. They are from Bhind in Madhya Pradesh.

“The doctors have said that he can’t be treated now,” she wept. “I had come to Delhi for his treatment but got stuck here. He is living the last few months of his life, that too away from home. What if he dies here, without seeing our kids?”

“We don’t know how we will even go back when the lockdown is lifted. We have no money in hand. He was the only earning member of our house, and now he is dying a slow death.”

Sohan Lal, executive district magistrate of the area, however, said that locals who have been kept at the shelter would be released as and when their family members arrive to take them back. So far, over 40 people have been released from the shelter home. He said,”We are doing the best we can for these people with the purest of intentions.”