By trending #MeTooUrbanNaxal, citizens online discovered how to silence a phrase that was aimed at silencing them: with solidarity and a bit of fun. 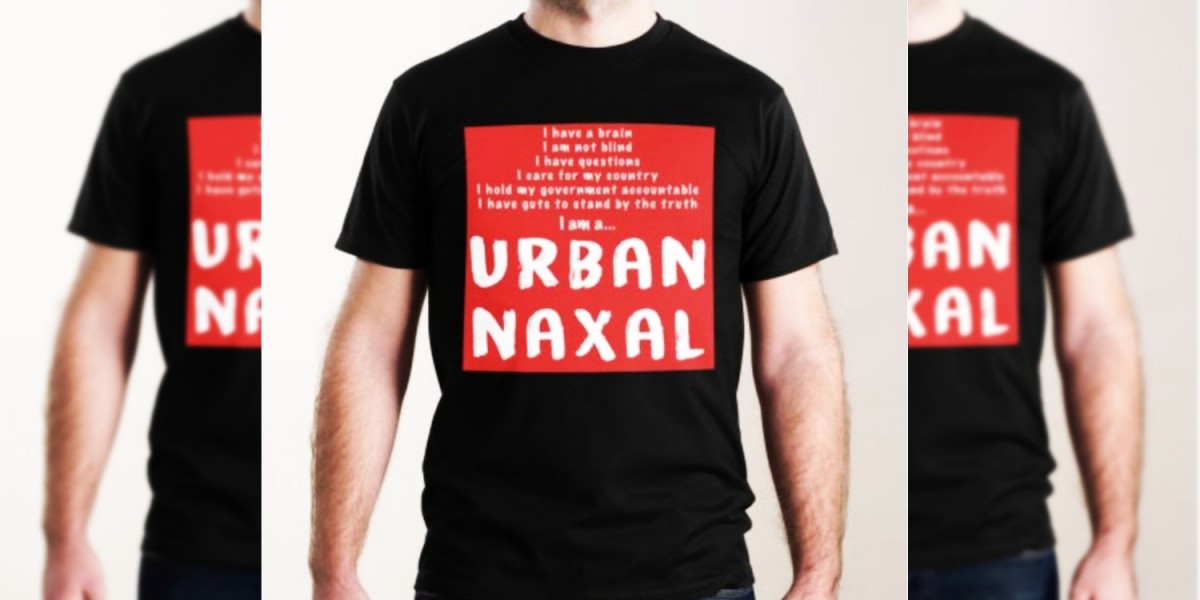 How do you disarm a weapon when that weapon is a word? There are at least three ways to try. One is to argue back, on the merits of what the word should mean. That doesn’t usually work – anyone pointing a weapon is not interested in proper usage.

The second is to ignore it, to avoid normalising that language or giving it any more traction. But turning your back to a gun doesn’t make it disappear. As long as words remain on the terms of those who weaponised them, they promise real violence – marking you as a target for police, vigilantes or even enterprising assassins.

The way to disarm a weapon is to seize it yourself, and with words, that transfer is always possible. If you can reclaim or rewire its meaning, a word is suddenly in your hands. It can’t be done alone, though. The word is still dangerous until it is fully neutralised, which is more than an individual voice can achieve.

On August 27, primetime news shows began to discuss a damning parliamentary report, which indicated that demonetisation, apart from failing its other objectives, had cost India at least one percentage point in GDP growth. The next morning, Pune police swept through five cities, raiding homes and arresting lawyers and activists – some of whom had been previously arrested and acquitted – for alleged links to Naxal militants.

On Twitter, apologists tried to chill protests by calling for ‘young people to make a list of all those who are defending #UrbanNaxals.’ This was the weaponised hashtag – an upgrade on #AntiNational, which has lost its edge from overuse, especially its backfiring use against student leaders, who have risen above the smear and straight onto a national platform.

#UrbanNaxals was a deadlier calibre: It implied not just a vague thought-crime, but the actual criminal act of associating with an armed movement. The charge was as serious as they come, and the burden of proof, zero. Inconvenient activists and human-rights defenders were #UrbanNaxals before they ever saw a judge; and nobody could stand with them, or even try to correct misinformation about them without being marked in turn – a perfect chilling effect.

At least that was the plan. Until more Indians decided to be #UrbanNaxals too.

On the morning of Aug 29, Pratik Sinha, the founder-editor of AltNews.in, reflected on his Twitter about how the loaded phrase ‘anti-nationals’ had been disarmed – and how Indians could do the same with the #UrbanNaxals.

“It started bothering me when I briefly saw Republic TV yesterday,” Sinha told The Wire, “And above the windows of those who were critical of the arrests, the tagline was ‘Supporting Urban Naxals’ or ‘For Urban Naxals’ – something like that.’ He knew that calling people anti-national ‘is not effective anymore, and that they are going to build up on that phrase ‘Urban Naxals’ – which is why I wrote this on my Facebook post first thing this morning, as soon as I opened my eyes.” 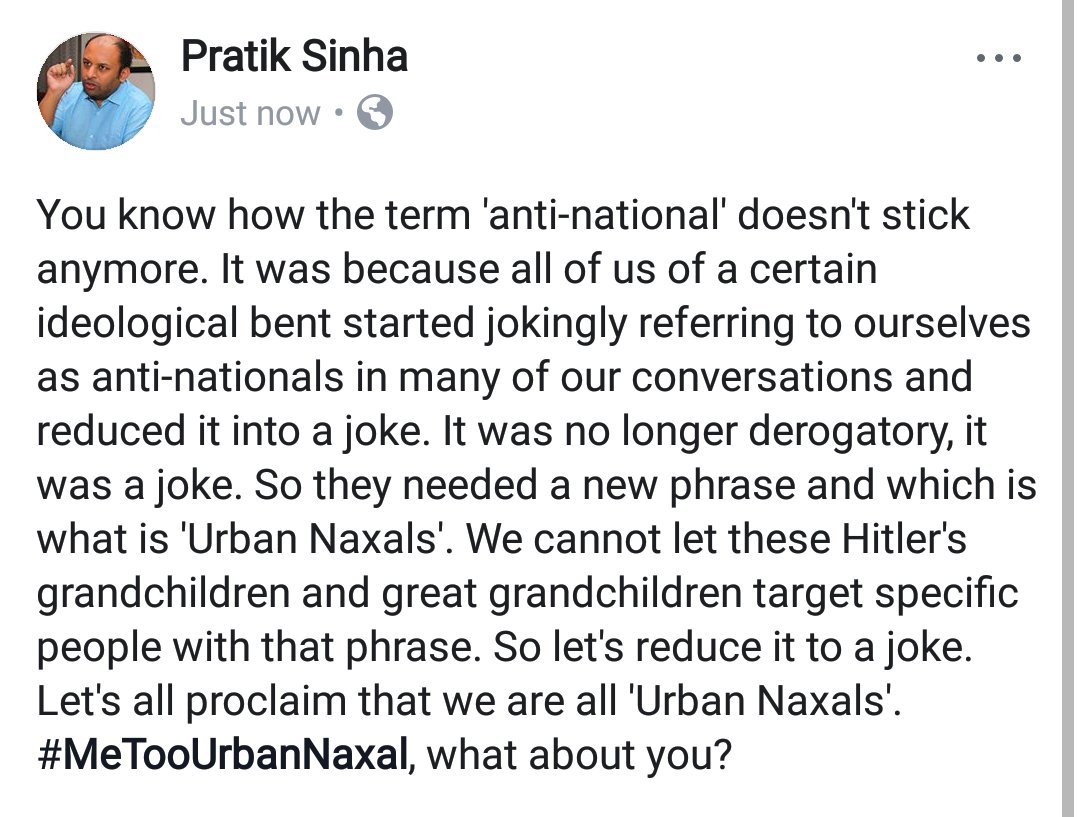 “Let’s reduce it to a joke,” Sinha wrote. Indian Twitter grabbed the mic. Before noon, #MeTooUrbanNaxal was trending at second-place nationally. By sundown, it was the top trend in India.

With a contagious mix of solidarity and sarcastic fun, users volunteered en masse to be listed as ‘Urban Naxals’, neutralising the threat the word was meant to carry.

Dear @vivekagnihotri,
I have a t-shirt for you – please send address so that i can send first one for inauguration ??
Also please confirm size – XXXS I believe? #MeTooUrbanNaxal pic.twitter.com/AeUjBZwZpA

Though @vivekagnihotri has already labelled me, is there still a process to apply for the #MeTooUrbanNaxal membership. I don’t want to miss out the founder members privileges. May be free pass to Hate Story 4 (pass). Next Rafale Lock movie preview access. Apply fast all Naxals! https://t.co/IY6gjqvbGY

#MeTooUrbanNaxal is fun. it may even come back to haunt us one day. but even exceptional activists like sudha bhardwaj and arun ferreira aren’t the most vulnerable or the most easily silenced indians. it’s the people they work for: the people for whom the message is meant.

For Indian Twitter, it was a Spartacus moment – a chance to stand up in the face of a threat, with only the confidence that if others do the same, the threat falls flat.

In the legend made famous by the Hollywood movie, Roman slaves are defeated in an uprising, then given a choice: Their lives will be spared if they identify their leader, Spartacus. It is an epic example of how authoritarian powers use fear to break unity and isolate the defiant – and how that can be undermined by solidarity, and even more, collective identification.

The threat of the label #UrbanNaxals isn’t quite crucifixion, but it is a lot more real in India in 2018.

Forty years ago, during the Emergency, the government of India sharpened the words ‘anti-national’ and ‘anti-Indian’ for use against leading dissidents. Since 2014, that language is back – aimed not at the opposition, but lower down, at the foundation of our ability to ask the tough questions that will always surround nationalism, religiosity and state power.

The real defenders of democracy are usually in the field, or at work in their own fields; their fight for citizens’ rights, including those of tribals and minorities, isn’t happening on social media. The language used to intimidate them, however, is being formed on Twitter – and while this fight isn’t finished, #UrbanNaxals isn’t nearly as intimidating as it was yesterday.