Marooned and Abandoned: Workers From Jharkhand and Bihar Run out of Food in Meerut

The plight of these workers shows the gaps in the Centre's relief package and how many workers may be slipping through the cracks of relief camps. Workers from Eastern UP and Bihar stranded at a construction site close to Meerut. Photo: Kabir Agarwal

Meerut: About 25 kilometres from Meerut, on the Ghaziabad-Haridwar highway, a narrow-rugged path leads to a railway crossing. An underpass was under construction. Work stopped on March 22, the day of the ‘janata curfew’.

The daily wagers working on the construction site are still living here in two small make-shift tents. They are running out of food.

“We only have about 5 kilograms of atta (wheat flour) and some potatoes. Maybe enough for one more meal,” said Ajay Prasad, one of the workers. Around 30 workers have been left stranded here in between fields of sugarcane and next to a railway track. All workers are from Latehar district in Jharkhand over 1,200 kilometres away. 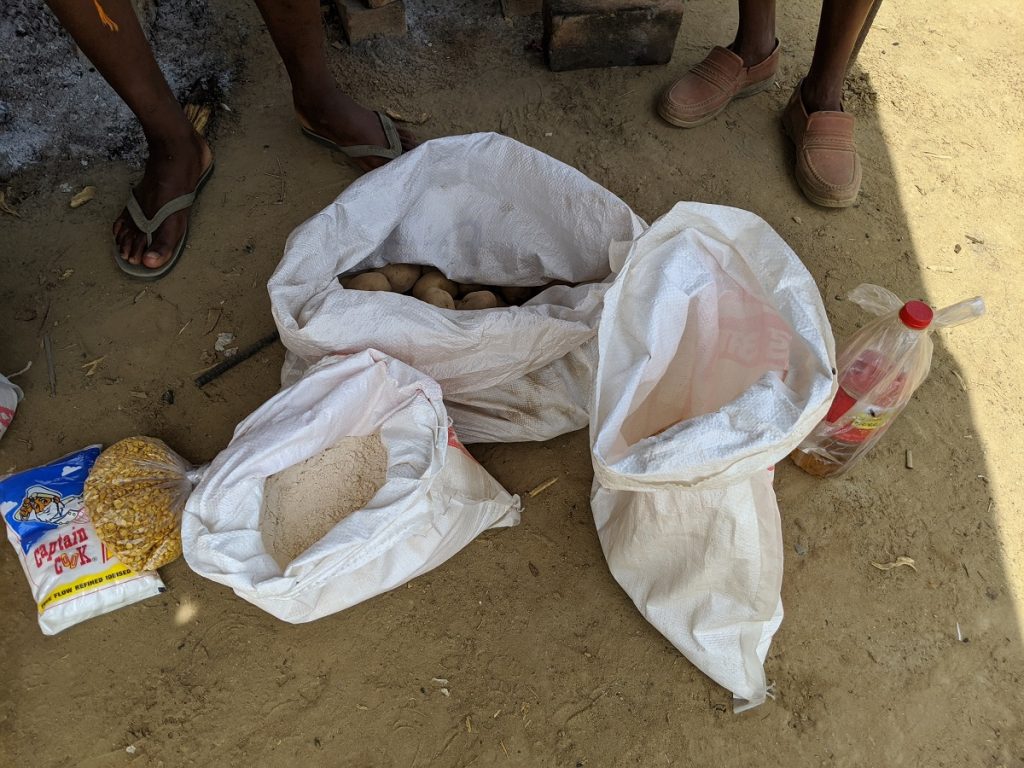 Some potatoes, wheat flour, oil and salt is the ration that the workers are left with. Photo: Kabir Agarwal

“We don’t know anybody here. And don’t have a lot of money left with us either,” said Prasad.

Also Read: ‘Hunger Can Kill Us Before the Virus’: Migrant Workers on the March During Lockdown

But now, that ration is almost over. “We don’t know what to do now. We called up the police officer who had given food last time. But he said that we should call the district magistrate. He did not answer the phone,” said Tek Narayan, another worker also from Latehar. 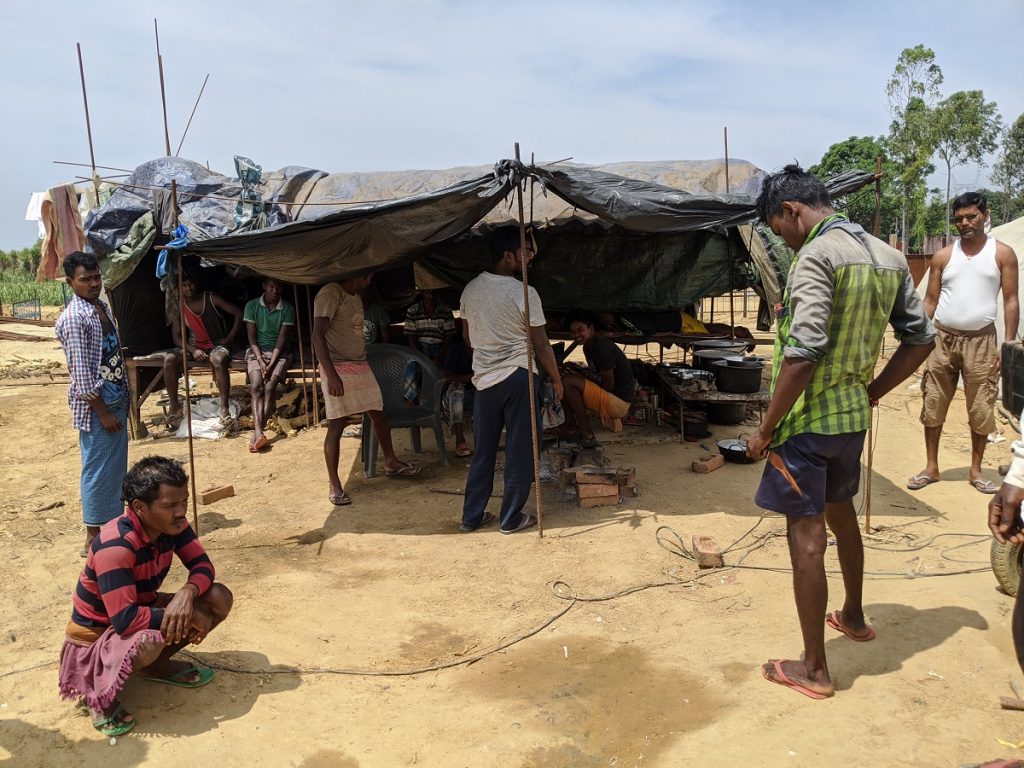 The workers from Latehar in Jharkhand living in makeshift tents near Meerut. Photo: Kabir Agarwal

About a kilometre away is another group of workers constructing another underpass. This group of 15 is from eastern Uttar Pradesh and Bihar. Unlike the first group, they were not provided any food by the police.

“We go to the villages around here to ask for food. Some people provide. But how long can we keep doing this?” asked Umar Farooq, who is from Katihar district in Bihar.

The workers at both construction sites also don’t have any soap to wash their hands with – which is a necessary measure to ward off COVID-19 – while they do have access to water through submersible pumps at the sites. 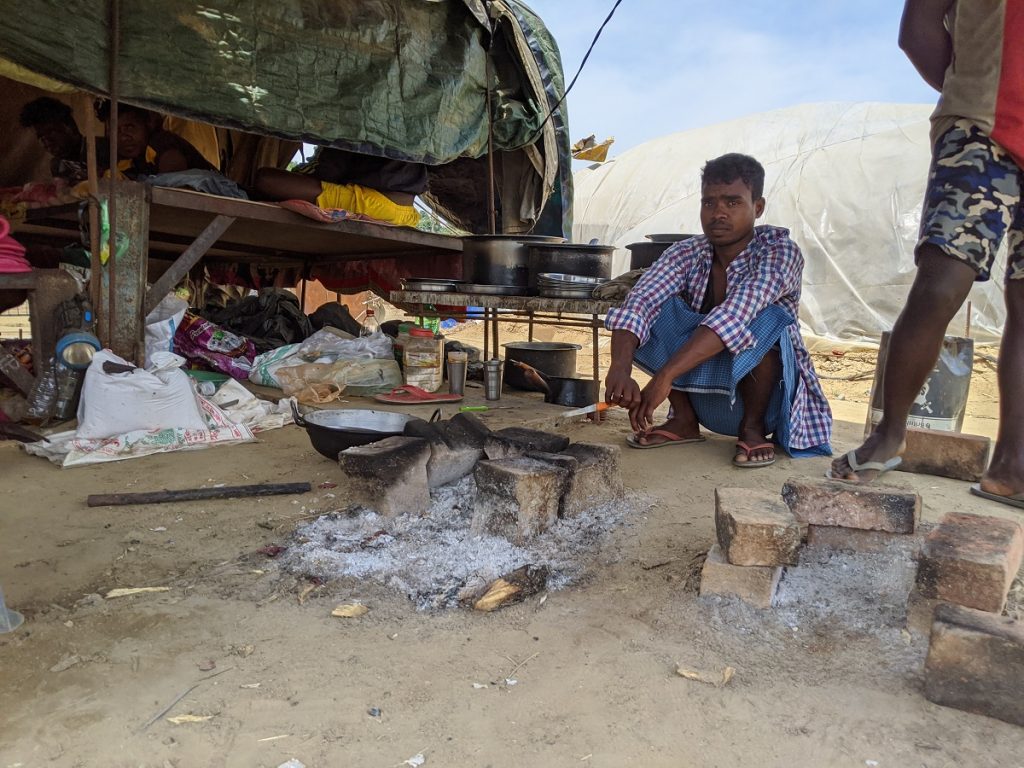 “The biggest hole in the relief package is emergency relief for people who fall through the cracks of jan dhan, public distribution system, etc. Migrant workers are one such group. There are many more,” said Jean Drèze, former member of the National Advisory Council and visiting professor at the Department of Economics, Ranchi University.

It was over a week after the lockdown was announced that the Centre recognised the ‘hole’, after being nudged by the Supreme Court. It then asked chief secretaries of states to ‘reassure’ migrant workers that the local administration and charitable institutions would extend help.

But, non-governmental organisations (NGOs), religious organisations and private individuals had swung into action much before that and had begun providing relief to migrant workers – and others who needed help – as soon as the lockdown was announced, and the problem was quite visible.

On April 7, the Centre filed a status report with the Supreme Court in which it mentioned the number of food camps set up across the country by the government and NGOs. In India, NGOs have set up over 9,400 food camps while state governments have set up 7,848.

In Uttar Pradesh, the government has set up 893 food camps, while NGOs have set up 1,665. So, a total of a little over 2,500 food camps for India’s fourth-largest state by area and largest in terms of population. In fact, if UP were a country, its population of over 200 million would make it the eighth most populous in the world.

None of these food camps, however, were found in the area surrounding the construction sites where these workers are staying. While community kitchens have been set up by the state, NGOs and public-spirited individuals in Meerut, most are located in and around the main city and adjoining towns. Workers such as the ones The Wire met could still fall through the cracks.

Both sets of workers The Wire met have been employed to build underpasses which will make it easier for people living in villages nearby to get on to the Ghaziabad-Haridwar highway. The Indian Railways has contracted the work to a firm called RS Construction, which in turn has hired these workers through a sub-contractor. The workers are paid daily wages of Rs 300-Rs 400. 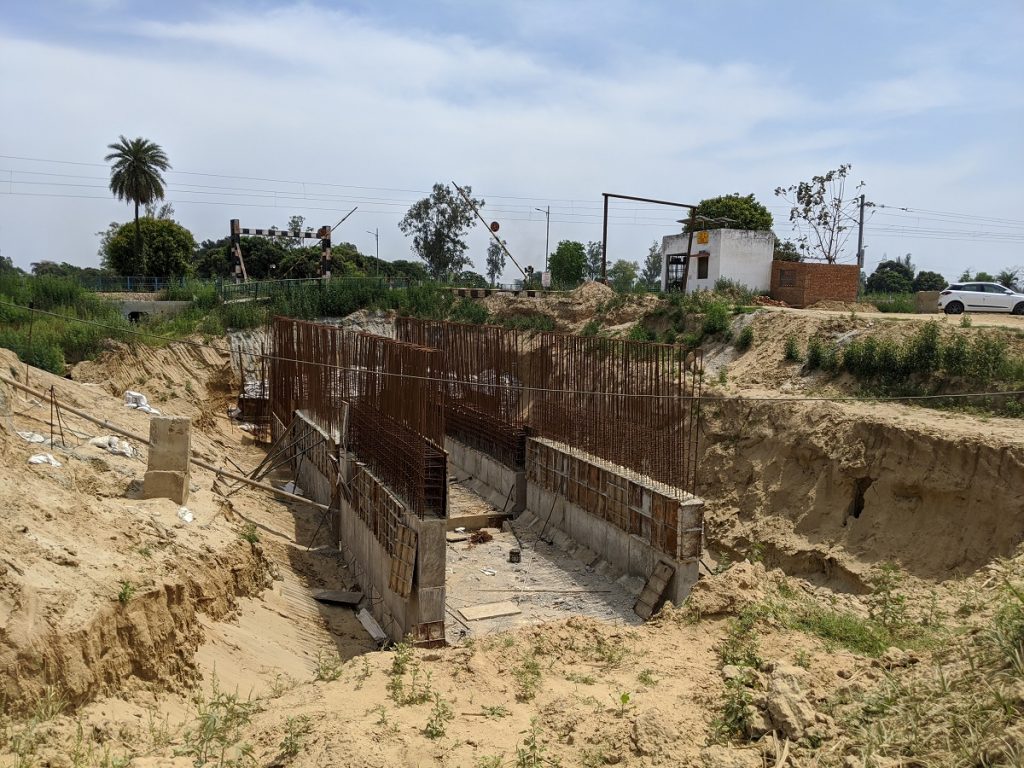 One of the under construction underpasses. Photo: Kabir Agarwal

When the work was ongoing, the workers would ask for a part of their wages every week and use it to purchase food items. But since the lockdown, this system has not worked as on the one hand, money from the contractor has been difficult to come by and on the other, even if it did, the task of purchasing grains would be difficult.

“Even if we had money, how would we move around? We keep hearing that the police is beating up poor people. And the shops are also not open,” said Narayan.

After The Wire made several calls, the district magistrate’s office in Meerut assured that food will be arranged for the workers.

But, these are only about 40 workers. According to an Indian Express report, there are at least 6.54 lakh migrant workers from Jharkhand alone who are stranded in different parts of the country. “There could be millions in the country,” according to Drèze, who believes that it should be the job of the state governments that the workers are stranded in to provide them with food and shelter.

“It is not possible for the home state to organise relief. Relying on NGOs is also not enough. They cannot reach out to millions of people. I feel the logical thing would be for the host states to take the responsibility,” he said.

Shyam Kishore Singh, a migrant worker from Bendi village in Latehar, said, “We also want to ask the government – Jharkhand government or UP government – to please arrange a vehicle for us so that we can go back home. We will pay for it from what we have earned in March. We will ask the contractor to release our payment and pay for the fuel and the driver ourselves. We are not asking the state to pay just to arrange a vehicle to take us home.” 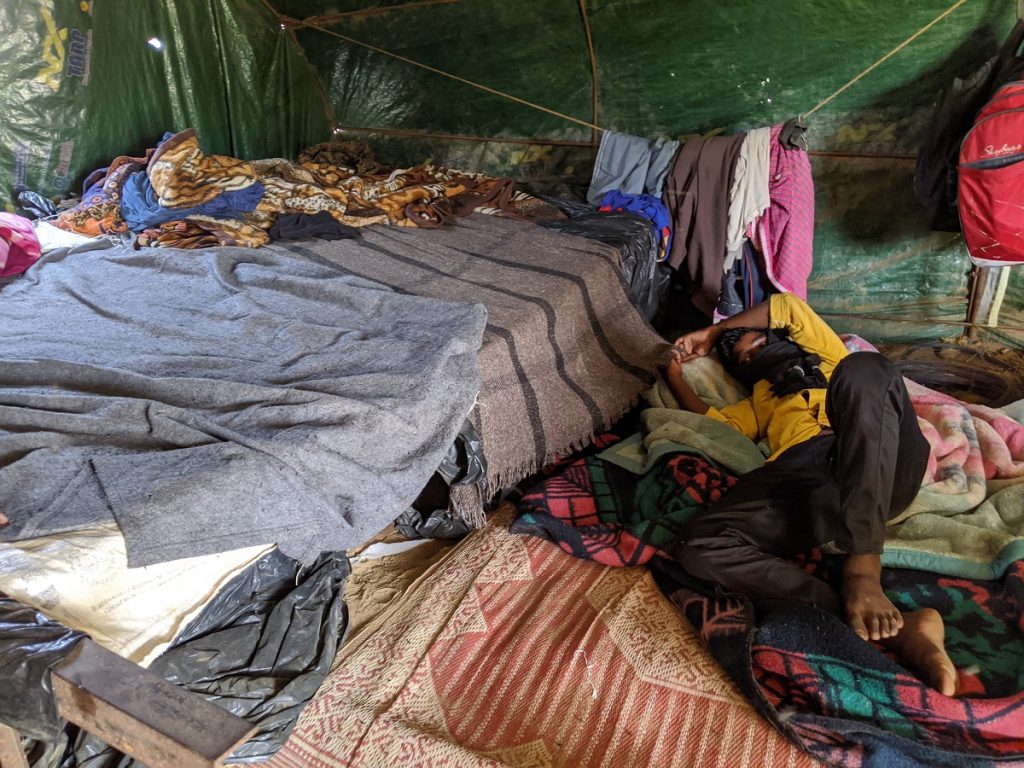 Inside one of the tents. Photo: Kabir Agarwal

Seven members of Singh’s family, who are in Bendi village, are also struggling to find food. “My income has stopped because work has stopped. So, I can’t send them any money,” he said. The family survives on the daily wages that he and his brother earn. Singh earns Rs 300 every day and his brother, who is in Jharkhand, Rs 250.

Also Read: What Happens to the Wives of Male Migrant Workers, Who Run Entire Households in Villages?

The family does not have a ration card and is thus ineligible to receive food grains through PDS.

Activists Aruna Roy and Nikhil Dey, writing for The Hindu, had suggested that the government should supply food grains “without conditions to help prevent hunger amongst those who may have no cards.”

Even if the lockdown is lifted on April 15 – which now looks increasingly unlikely – the workers would like to go back home for some time. “Everyone at home is terrified. Don’t understand what this disease is. We are constantly worried about them over here. They are worried for us. We want to meet them,” said Prasad.

Narayan said that he would rather be hungry in his home than in an unknown place. “Wahan jo bhi khayenge chahe roti aur namak hi ho. Apna to hoga. Kisi se maang ke to nahi khana padega (Whatever we eat there – be it only roti and salt – it will be ours. We won’t have to ask anyone for food),” he said.