The Child Victim as the Face of Modern Suffering

Caught in a state beyond language, the child victim is primordial to every representational moment in the writing of disaster or suffering. 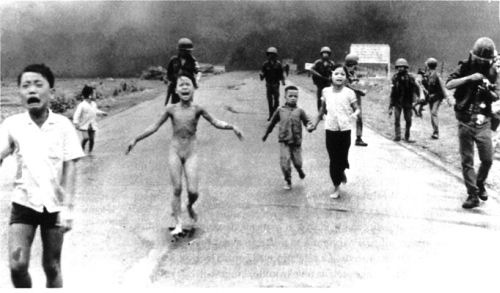 Children are participants in the meaning-making process, as catalysts, and are not just passive victims. They increasingly make sense of the world for us, especially in the age of media coverage of disasters and tragedies, starting roughly with the Vietnam War. The child victim is the face of humanity in the modern age.

Phan Thị Kim Phúc OOnt (the ‘Napalm girl’ from Vietnam, photographed by Nick Ut in 1972), the unnamed child stalked by a vulture in Kevin Carter’s 1993 photograph (Carter committed suicide a few months after taking this picture), Omayra Sánchez Garzón (the Colombian trapped in the debris of her home for three days before dying, in full view of the cameras, especially Frank Fournier’s, 1985), Aylan Kurdi, washed ashore in Turkey as his parents fled across their nation escaping ISIS (2015), the baby crying in the Shanghai railway station ruins after a bombing (1937), the unidentified child being buried after Bhopal (Raghu Rai’s photograph, 1984) and now Omran Daqneesh from Syria (2016) are all icons of a world they never made sense of, being children, and instrumental today in making sense of it for us, the remainders.

The child victim compresses the world’s sufferings, offers a frame like no other in which to interpret the world.

So is the child the ideal victim? Nils Christie (1986) proposed the following features of the ‘ideal victim’: the victim is weak in relation to the offender; the victim is, if not acting virtuously, then at least going about their legitimate, ordinary everyday business; the victim is blameless for what happened; the victim is unrelated to and does not know the ‘stranger’ who has committed the offence; the offender is unambiguously big and bad; the victim has the right combination of power, influence or sympathy to successfully elicit victim status without threatening (and thus risking opposition from) strong countervailing vested interests. (Victim surveys and crime statistics have not always borne out Christie’s taxonomy.)

This is precisely why the child victim draws our attention: the child victim does not have a language to communicate in. The child victim communicates not by establishing claims but simply by being a child. The martyr as witness, we have been told by Jacques Derrida, does not always offer his story: he offers himself, his body as testament to his faith. This is the body of suffering that communicates as a body whose disintegrated state immediately warns of the loss of corporeal coherence in a being/person who has not yet attained corporeal coherence in any wholeness. This spectacle of the child victim is a version of horror fiction and film where the dissolving body is a staple image, writes Kelly Hurley, with the difference being: the body of the child victim has not dissolved or been dismembered (though there are those kinds of images as well), but is always positioned at the cusp of such a dissolution. It is not the disintegration as much as the processes and moments leading up to the imminent, even unstoppable, dissolution that horrifies.

Adriana Cavarero tells us that we need to distinguish between vulnerability and helplessness: while all humans are vulnerable, only some of us are truly helpless – children, the old and the ill. This helps us go some way to think of the power of these images of child victims. What captures and captivates us about these victims is that there is such a lack of understanding on their part of whatever is happening to them (of course for the dead, like Rai’s unidentified child or Kurdi, there is no sense-making anyway). The helplessness is not in their injury alone, but the complete incomprehension that dissolves into a primal state: tears or complete silence.

What the child victim offers us is a glimpse of the primal in the human, embodied in the animal sounds we are reduced to when in pain or in our infantile stage, a stage from which we supposedly evolved into linguistically competent and meaning-making creatures. The child victim is the ‘mere’ body, lacking any other marker except as one whose body has been turned into an instrument of her/his own suffering, for which the child has no adequate explanation. Even the tortured adult has some minimal interpretation possible: hence the tortured’s screamed-out question: ‘Why me? What did I do? What do you want from me?’ The child victim offers no questions, does not beg answers. Caught in a state beyond language other than screams or silence, the child victim is primordial to every representational moment in the writing of disaster or suffering.

The child victim of specific crimes – abuse, murder, etc. – occupies a separate space. Here the victim (for instance the victims of Ian Brady and Myra Hindley, or Jeffrey Dahmer) is, or had been, weaker than the perpetrator or offender. The victim attains victim status through this unevenness of agency and power. There is an individual who might be held to be guilty and who, theoretically, may be brought to justice for harming the person. Such victims are radically different from Phan Thị Kim Phúc OOnt or Aylan Kurdi because, in their case, there is no single, identifiable individual perpetrator. Undoubtedly, child victims of serial killers attract sympathy and outrage which then is channelised against the perpetrators (if caught, as illustrated in the social outrage against Brady and Hindley). Thus there is a clear victim/perpetrator binary at work.

In the case of Phan Thị Kim Phúc OOnt or Kurdi, the moral status of the victim is amplified because one cannot find an individual perpetrator and only a perpetrator-situation. War, riots, natural or man-made disaster are perpetrator situations in which the child victims are produced and nobody can be brought to justice for their victimhood. It is the impossibility of ever acquiring justice for the child victim that maves Phan Thị Kim Phúc OOnt or Omran Daqneesh unique in terms of child victim status. These child victims are victims of the world at large, of systemic conditions and events.

The child victim is an ideal victim because s/he walks into, or is at, the ‘scope’. S/he is at once the site of ‘skopos’ and ‘telos’. Samuel Weber makes the distinction between skopos and telos, where the former is the target and the latter the fulfilment of an action or set of processes: “Skopos is already, tendentially, the tele-scope, since ‘‘the one who aims’’ is also ‘‘the one who surveys.’’ To survey, in this sense, is to command at a distance.” Skopos “designates not just the act but also the object of such watching: the mark or target”. Skopos, as noted above, demands that the structures of observation be in place so as to plan for the unforeseen arrivant. In war time, the imminent victims are watched and then they walk into the firing range (Phan Thị Kim Phúc OOnt, the Shanghai child). In natural disasters, they occupy a place on a fault line (Garzón lived in a village on the edge of a volcano and Bhopal’s absent disaster-preparedness in relation to Union Carbide is now legendary). That is, the child’s victimhood results from being a target of opportunity, whether in wartime, natural disaster or industrial disaster. The child simply happens to be in a zone devoid of any resources for help or survival. S/he is scoped for suffering and/or death, so to speak. S/he is not an individual target, but is nevertheless the individual face of the event.

Disaster, as commentators have noted, is not the event but the effects of the event. In Wolf R. Dombrowsky’s formulation: “Disasters do not cause effects. The effects are what we call a disaster”. These effects are prefigured, between two different logics in operation: the previvor logic of survival and vulnerability, and the corporate logic of greed and accumulation. The child victim in situations of war, natural disaster and industrial accidents, is already a previvor (I adapt the term from the medical humanities used to describe individuals who, because of inherited genetic anomalies, are predisposed to cancer but who have not seen manifestations of the disease.), always already a possible victim. The event produces effects that then transform the previvor into a victim. This argument shifts the focus away from the child as victim to the conditions that produce victimhood.

Thus, this argument, drawn from critical victimology, also resists assuming a kind of self-evident identity of the victim, linked to the harm they experienced and their status recognised by criminal or humanitarian laws. Instead, it forces us to look at the structures that not only produced the experience of harm among the children but also the cultural practices that shaped our sensitivities towards those who experienced harm.

Cultural practices that shape our sensitivities to suffering children are central to our sense of the world today. Commentators like Luc Boltanski have noted the development of sensitivities to ‘distant suffering’. Within this spectacle, it is the child victim that condenses, literally and metaphorically, the scale of suffering to one face, one body, and one expression. The child victim, in other words, is emblematic of a world compressed: across historical, political and geographical spaces, the world might be read within a history of child victim faces.

If meaning is a physiognomy, then what is the meaning of the world we see in the child victim’s face?

I am grateful to Padma Prakash for telling me to write on this.