In a letter to the Delhi government, the panel has sought the dropping of separate data on cases pertaining to the religious gathering. 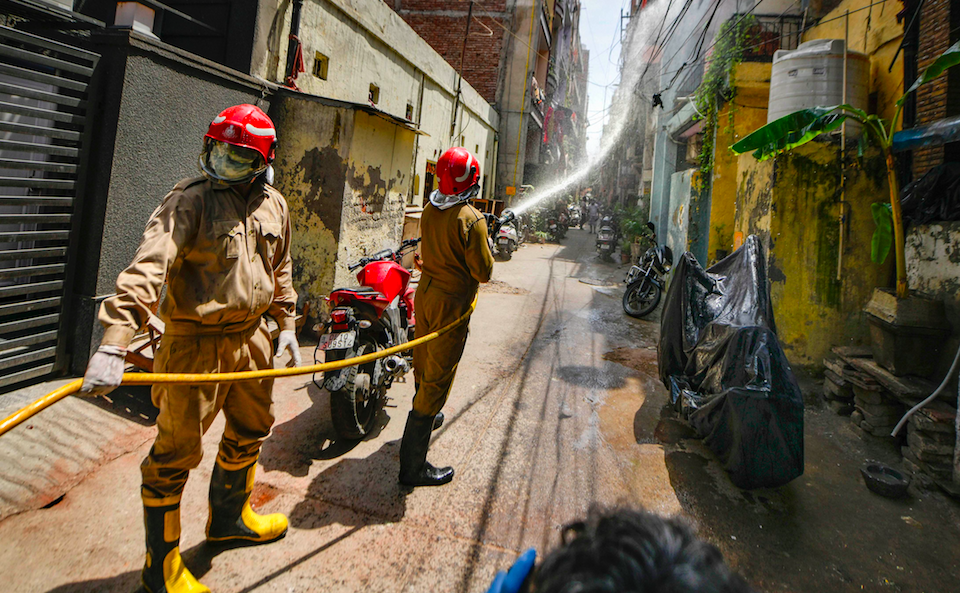 Firefighters spray disinfectants at a locality near Nizamuddin during the nationwide lockdown to curb the spread of coronavirus, at Bhogal in New Delhi, Thursday, April 9, 2020. Photo: PTI

New Delhi: The Delhi Minorities Commission has taken strong objection to the Delhi government’s issuing a separate account of COVID-19 cases related to “Markaz Masjid” in its daily health bulletin, saying it will feed into the “Islamophobia agenda of the lap media and Hindutva forces”.

The panel’s objections assume significance since even Delhi chief minister Arvind Kejriwal and health minister Satyendra Jain have been regularly issuing statements about the number of coronavirus cases pertaining to the religious group.

In a letter to the Delhi health department, the Commission chairman Zafarul Islam Khan demanded that there should be no mention of any information with “religious undertones” in the daily bulletins on coronavirus cases in Delhi.

“Your bulletins of coronavirus victims are showing a separate column ‘Markaz Masjid’. Such thoughtless classification is feeding into the Islamophobia agenda of the lap media and Hindutva forces and has been easily turned into a handle to attack Muslims across the country.”

He said due to these cases and their biased reportage by the media:

“Muslims are being attacked in various areas, calls are being made for their social boycott.”

Further, he pointed out that “one boy has been lynched in the North-West Delhi village of Harewali” while many others have been attacked in different areas.

Khan also cited a legal reasoning behind why this practice of identifying Markaz-related cases separately should be discontinued. He wrote:

“World Health Organisation has taken cognisance of this phenomenon, unique to India. WHO Emergency Programme Director Mike Ryan said on 6 April, 2020: ‘Countries should not profile novel coronavirus disease (COVID-19) cases in terms of religion or any other criteria’.”

Further, Khan said, the advisory requested citizens to “never spread names or identity of those affected or under quarantine or their locality on the social media”.

The DMC letter also urged the Department of Health to stop mention of any data which has religious undertones and which can be exploited for political or communal purposes by vested interests.

He said an advisory to the effect has already been issued by the Union Health Ministry on April 8, 2020. It stated that:

“Despite all precautions, if anybody catches the infection, it is not their fault. In a situation of distress, the patient and the family need support and cooperation.”

It is interesting to note here that while the Union health ministry has issued an advisory now, in the case of singer Kanika Kapoor, who recently came out of quarantine after testing positive for COVID-19, not only was she booked for not isolating herself and attending some parties in Lucknow upon her return from United Kingdom, she was also brazenly vilified, by both the media and the state.

In the case of the Markaz too, the state government functionaries have regularly given out separate information on cases pertaining to people who attended the meet.

On the sudden rise in cases, he added that “one reason for that is the rise in the Markaz cases.”

Even today, Health minister Satyendra Jain also made a mention of cases related to the religious gathering in Nizamuddin, saying: “Till now, there are 669 COVID-19 positive cases in the city, including 426 cases from Markaz,“

Even today, health minister Satyendra Jain mentioned cases related to the religious gathering in Nizamuddin, saying: “Till now, there are 669 COVID-19 positive cases in the city, including 426 cases from Markaz.”