Rs 10 Lakh: The Price of a Manual Scavenger’s Life

For those who survive, rehabilitation and compensation are hard to come by. 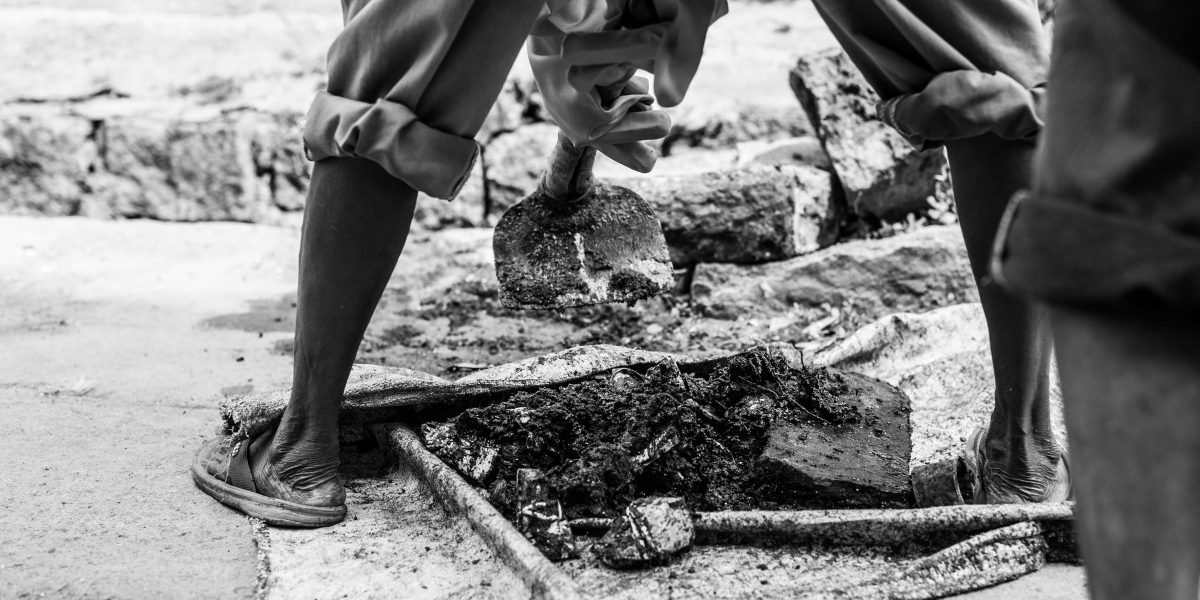 This is the third article in a four-part series on manual scavenging in Tamil Nadu. Read the first two parts here and here.

Chennai: When the Prohibition of Employment as Manual Scavengers and their Rehabilitation Act, 2013 came into being, the NGO Change India collated media archives of manual scavengers’ deaths reported from 1993 onwards in Tamil Nadu and submitted a list of about 300 names to the government for compensation. The numbers went down to a little over 200 after verification, of which, till date, more than 40 haven’t been compensated.

Documents provided by Change India show that 13 families had been traced, but not compensated, by June 2017, but these families suddenly became untraceable by October 2017. 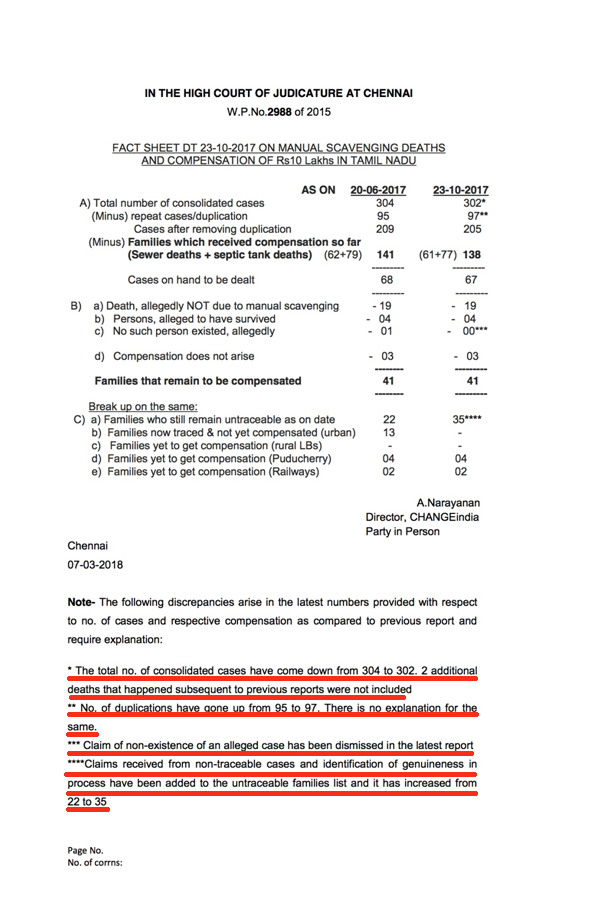 A. Narayanan, director of Change India, said that initially, state governments had refused to pay for deaths in private and commercial places, but the Supreme Court directed them to pay because the deaths were due to a “failure to protect” by the state, just as in cases of sexual abuse and rape.

The complaints filed in cases of manual scavengers’ death are always under Section 304 (causing death due to negligence) of the the Indian Penal Code and Section 174 (death by accident) of the Code of Criminal Procedure. Samuel says none of the complaints filed invoked provisions of the manual scavenging Act or the Scheduled Castes and Scheduled Tribes (Prevention of Atrocities) Act, 1989.

The state branch of Sulabh International, an NGO, says that the main reason behind the deaths in septic tanks is due to the irregularities in their size. The deputy controller, who did not wish to be named, said that people opt for septic tanks which are as deep as 100 feet in order to save area in breadth. He suggested that the size of a septic tank mustn’t exceed six feet. Large residential and commercial complexes should have bio-gas plants instead.

Workers agree to clean septic tanks manually because of extremely low salaries in other kinds of contract sanitation work and the lack of awareness on the dangers involved. 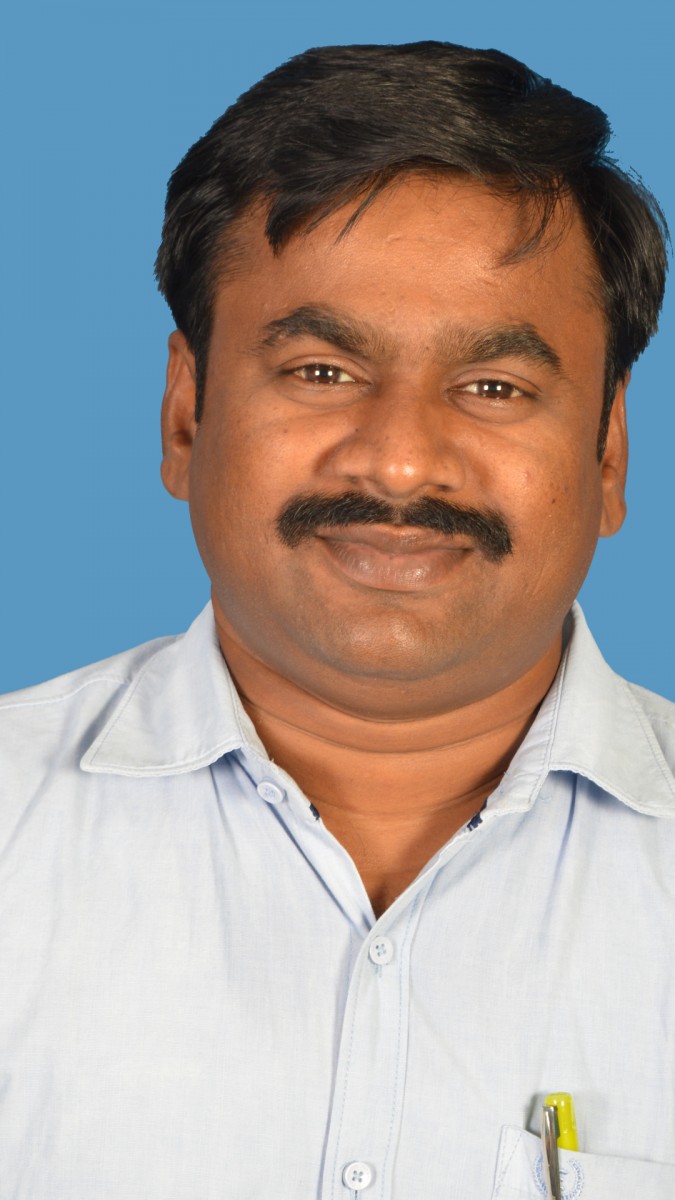 Many workers, after their shift with contractors, go individually into septic tanks, as they get Rs 500 for every dive, which is quick money for them. Most of the workers who came to a recent government self-identification camp for manual scavengers in the city were school drop-outs. Family poverty forced them to leave school and enter the profession of their parents’, creating a never-ending cycle.

A reply to an RTI filed with the Solid Waste Management Department, Greater Chennai Corporation, said 170 manual scavengers have been given one-time cash assistance of Rs 40,000 each by the National Safai Karamcharis Finance and Development Corporation. There is no mention of comprehensive rehabilitation, like the allocation of a plot of land or scholarships. Another report by the NSKFDC says that as of April 2018, 250 of the identified manual scavengers had opted for skill development training. Not a single rupee for this has been released in Tamil Nadu so far.

Narayanan of Change India described how a person inside a septic tank dies. Because of prolonged exposure to the gases present inside, workers tend to lose their sense of smell and they become unable to identify the presence of poisonous gases and get out before it affects them.

Dr V. Ananthapadmanabhan, a Chennai-based general physician, explained, “Due to the lack of oxygen in a septic tank, the person gets suffocated, following which his windpipe swells due to inflammation and he gets choked. And finally, he either dies due to asphyxiation or drowns in the tank.”

Manual scavenging Act only on paper

Deaths from manual scavenging continue despite the 2013 Act because investigations reveal that several aspects of the Act have not been implemented.

Section 24 of the Act states, “Every State Government, shall by notification, constitute a Vigilance Committee for each district and Sub-Division.”

The committee is supposed to be chaired by the district magistrate and must include Scheduled Caste MLAs from the district. It must also include social workers from NGOs that work to eradicate manual scavenging. No such committees have been constituted.

Apart from the vigilance committees, the Act also mandates the formation of a State Monitoring Committee to implement the Act. This committee was formed last year and is headed by the chief minister. Deepthi Sukumar, national convener of the SKA who is a part of the committee, got to know of her inclusion only through the papers.

That doesn’t bother her. What irks her is that the committee has not met even once since its formation on April 24, 2017.

Under Section 20 of the Act, state governments have the option of appointing inspectors to check whether any actions in contravention of the Act are taking place in his or her jurisdiction. Currently, no such inspectors have been appointed.

According to G. Vidya, an official at the Solid Waste Management Department, sanitary inspectors at the zonal levels have been given the task of verifying self-identified manual scavengers.

It is here we find the answer to the discrepancy in the numbers provided by the SKA and those approved by the government. “We can’t accept all names. If that happened, then anyone could come forward and claim they are manual scavengers,” said Vidya.

“Why would someone want to lie that they are manual scavengers? It is perhaps the worst job in the world,” says Samuel. “They don’t want to liberate us because we are Dalits.”