Journalist Kishorechandra Wangkhem has been arrested for a post which pointed out the capacity for communal disharmony in a Facebook post made by a non-tribal woman against the tribal wife of a politician.

New Delhi: Manipur journalist Kishorechandra Wangkhem, who was arrested on a sedition charge and then under the National Security Act by the BJP-led state government in 2018 for commenting against the RSS, chief minister N. Biren Singh and Prime Minister Narendra Modi, has once been arrested on a fresh charge of sedition.

The Manipur high court, in April 2019, had quashed the charges against the journalist and released him from jail.

According to the latest local reports, police have booked him this time for responding to a viral social media post. The post had been made by the wife of a high profile BJP politician of the state in response to a reportedly derogatory comment and ‘racial slur’ about her by a Meitei woman close to her husband. The wife belongs to a tribal community of the state.

In her Facebook post, the politician’s wife identified herself as a woman from the Maram community of the state’s Senapati district and said that she took the last name of the majority Meitei community after her marriage to the politician.

She reportedly said that she did not know of the whereabouts of her husband who had abandoned her with two children, in a house built by her in-laws. A news report in The Frontier Manipur noted, “She also said that she had heard that her husband is living with a woman.”

“Our two children have been missing you and asking where you are,” the woman wrote. According to the news report, she also wrote asking her husband to “tame the mistress” who has been using words derogatory to her on social media. She also appealed to all womenfolk to “imagine themselves in her situation and deliver her justice.”

On September 3, the journalist, responding on Facebook to the post of the politician’s wife, asked whether the derogatory comment of the “second wife” belonging to the majority Meitei community against the “first wife” from the Maram tribal community would affect the politician’s prospects in the next polls, as his constituency has a considerable number of tribal voters.

Kishorechandra is a Meitei.

Elangbam Ranjita, Kishorechandra’s wife, told The Wire, “While the police ignored the derogatory comment made by a non-tribal woman against a tribal woman, it took cognisance of Kishorechandra’s post.” She called this an instance of vendetta by the ruling dispensation against her husband.

As per state police, an FIR was registered on the matter by Maram Women’s Union (MWU) at Senapati police station, asking police to take necessary action against the journalist for his “communally derogatory remark against the Maram tribe”. The Frontier Manipur report said MWU felt that the journalist’s post “has intentionally targeted Maram tribe. His act has insulted and humiliated tribal women in general and Maram women in particular” and “caused an alarm and feeling of insecurity” besides “causing communal disharmony”.

Ranjita said that on getting to know of the FIR against him at Senapati district on September 11, Kischorechandra had consulted his lawyer. On September 12, a state police team also landed at his house in Imphal. The Senapati sessions court granted him anticipatory bail till September 28, pending a report from the police on the matter. 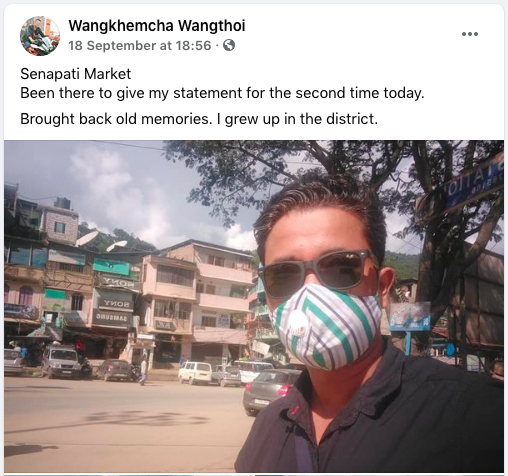 “Our lawyer kept enquiring about any development in the case but police gave us no information. So we had to wait. He was also called twice – on September 14 and 18 – to Senapati police station to record his statement, which he did. On September 28 early morning, the lawyer called to say that he just got information that the anticipatory bail had expired and police might take action. And before we know it, a police team was at our door, may be by 7-7.30 am. I would say it was all pre-planned,” his wife said.

As per news reports, Kishorechandra was kept at the lockup of the Imphal Police headquarters for five days before he was sent to judicial custody on October 3. The charges filed against him under the Indian Penal Code are 124A (sedition), 153A (promoting enmity between different groups on grounds of religion, race, place of birth, residence, language), 503 (criminal intimidation) and 3(1) (R) of the Scheduled Caste and Scheduled Tribe (Prevention of Atrocities) Act, 1989.

Ranjita said, “My husband’s post was to admonish the non-tribal woman for airing a derogatory comment about a tribal woman and causing communal disharmony. Instead, he has been accused of it now.”

She said she is in consultation with her lawyer to challenge the charges and seek bail. “It has barely been a month that we have been blessed with a child. The case has been filed against him at a time when I am not in a position to move around much yet,” she added.