The Supreme Court has pulled up the CBI’s investigation for naming the victims themselves in their new FIRs which are instead meant to prosecute members of the army and Manipur police. 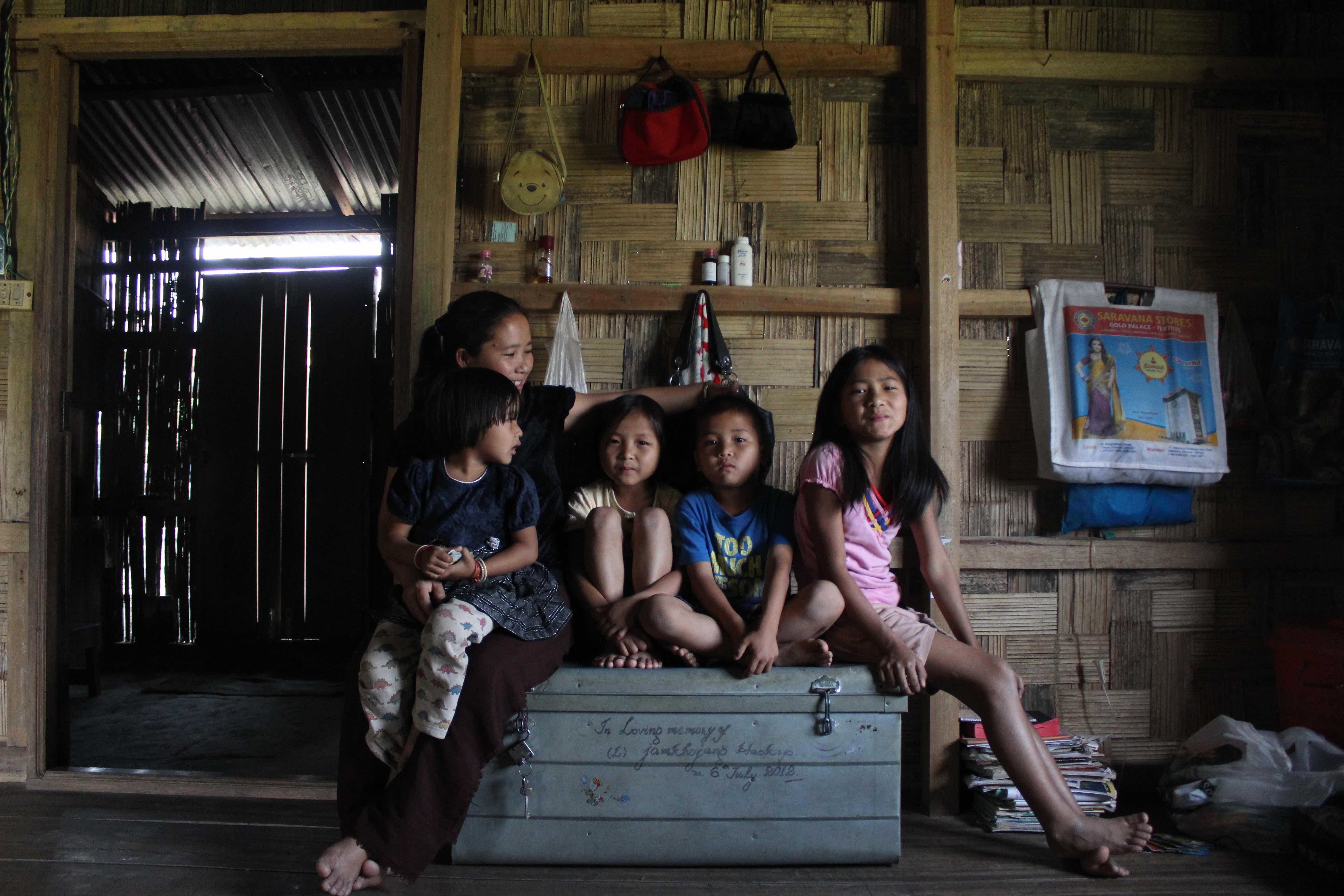 New Delhi: The Manipur fake encounters case which is being heard and monitored by the Supreme Court has reached yet another decisive moment. The Central Bureau of Investigation (CBI) – which has has been filing first investigation reports (FIR) against “unknown persons” even though documents with the investigation team point to a long list of potential perpetrators from among the Indian army, paramilitary and police – is finally coming under pressure to get serious about its probe.

The Wire has studied court documents including submissions made in court, orders of the Supreme Court and the FIRs themselves.

As of this month, the petitioners say the CBI has filed only about 25 FIRs. A court order from March 2018 says the CBI has filed 42 FIRs, but this relies on reports which the CBI has only given to the court and not to the petitioners. The status at present is far below what the Supreme Court had ordered in July 2017, where they said FIRs and chargesheets must be filed in around 95 cases by December 31, 2017.

The new FIRs are still being filed against “unknown persons” although there is material in the original FIRs in the form of the names of the initial complainants and informants who are meant to now be investigated under this case.

Petitioners also say that testimonies by armed forces personnel, who were themselves involved or aware of these encounters, have been reproduced in the new FIRs. This manner of writing the new FIRs thus implicates the dead victims and their families though it goes against the spirit of Supreme Court orders – which have asked for investigations to be done against members of the Indian armed forces, paramilitary and police, for their role in what are deemed to be extra-judicial killings.

In July 2016, the two judge bench of Justice Madan B. Lokur and Justice U.U. Lalit passed a historic order reiterating already laid down jurisprudence in India – that the “use of excessive or retaliatory force” by the armed forces is not permissible and requires investigation.

The court was responding to a petition alleging 1,528 cases of fake encounters in Manipur, filed by a network of mostly women under the name Extra-Judicial Execution Victim Families Association Manipur (EEVFAM). The women alleged that their family members, mostly men, were innocent and had been killed in these staged encounters.

After a year of hearings, the court had managed to find a method to deal with the 1,528 cases, and made a shortlist of 265 cases which they said they would hear first. Out of 265, they ordered a special investigation team to file FIRs and chargesheets in 95 cases by the end of 2017.

The Supreme Court may have broken new ground with its judgment but the official investigation does not seem to have picked up on the spirit of the order.

Take the case of 10 deaths in one single encounter in November 2000. The families of those killed have alleged that the 10 were killed by members of the 8th Battalion of the Assam Rifles.

Judges at the high court and sessions court had all agreed with the district court’s findings, that “there was no firing or cross firing” and that all ten were killed “by the personnel of Assam Rifles without any reason.”

Essentially, the high court had said that this was a fake encounter. It even awarded compensation to the 10 families of the victims.

Yet, there was no prosecution of the perpetrators in the Assam Rifles.

The ongoing case in the Supreme Court is a chance to change that. The accused – in this case, the 10 dead Manipuris –  can now be given the chance to be seen as victims before the law. And the claimed victims  – members of the Assam Rifles who said they had been fired upon and been forced to retaliate –  can now be investigated as perpetrators.

The original FIR filed in 2000 by the Assam Rifles itself said that a column of three vehicles was attacked with an explosive device and then fired upon. There happened to be eight people including a woman, who were around this site. They later “found” two dead bodies near the ambush side during their search operations after the blast.

The CBI’s new FIR highlights the fact that three earlier courts had found “ample evidence of indiscriminate firing of guns by the 8th Battalion Assam Rifles”.

Yet the FIR is registered against “Unknown Personnel of 8th Battalion of Assam Rifles”.

This is even though the original FIR in 2000 with all the details of this alleged genuine encounter was registered by a soldier from the 8th Assam Rifles himself – D.B. Thappa, Nb/ Sub, JC No 8234, F Coy 8th AR, C/O 99 APO. Thappa said in his FIR that two other members of the Assam Rifles had been seriously injured in that alleged firing – No. 83479 Havildar Jaipal Singh (who had multiple fractures on his right arm due to gunshots) and No. 83791 Rifleman Rembachorji Singh (who fractured his right thigh due to gunshots).

D.B. Thappa, Jaipal Singh and Rembachorji Singh are all now potentially accused in this case of 10 deaths and would need to have FIRs registered against them.

Yet the CBI has chosen not to move in the direction of these very clear leads. 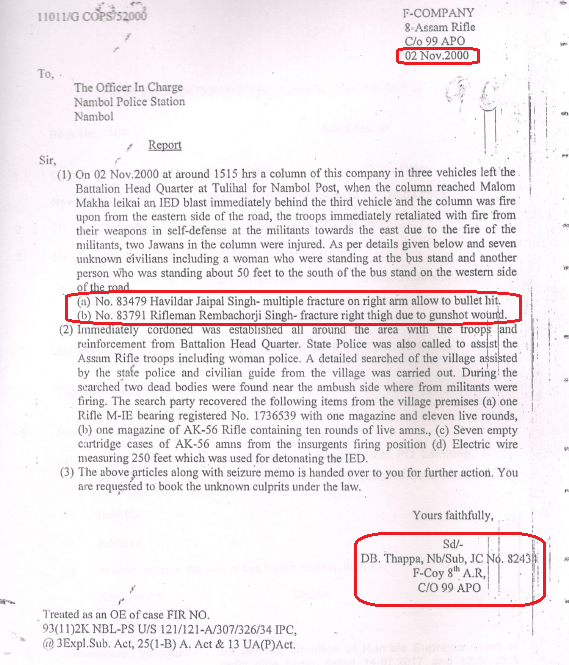 The original FIR from November 2000 which includes the names of three members of 8th Assam Rifles, with two of them being described as victims of firing by “militants” and one being the complainant. 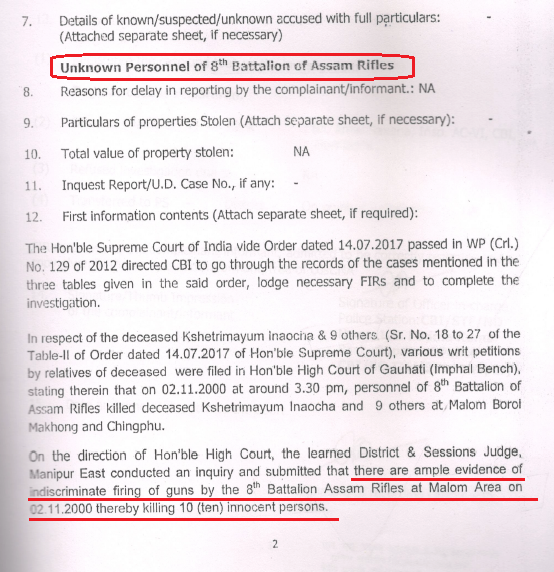 The new FIR filed by the CBI in March 2018, is against “Unknown personnel of 8th Battalion of Assam Rifles”.

The case of the 10 who died in this encounter is only one among the hundreds which now lie before the Supreme Court.

But in one case, five policemen are named

In one case, however, the CBI has named men in uniform in their FIR and registered it against them. This FIR names five individuals from the Manipur police, including a sub-inspector and four constables of the Manipur Commando Unit.

This case was of R.K. Laksana (also known as Vito Singh), killed in 1999. He was arrested one morning and taken into police custody and tortured. The high court ruled that since he was in the custody of the police when he died, they were “liable for loss of the life”. This is now recorded in the new FIR filed recently by the CBI which names some of the policemen. 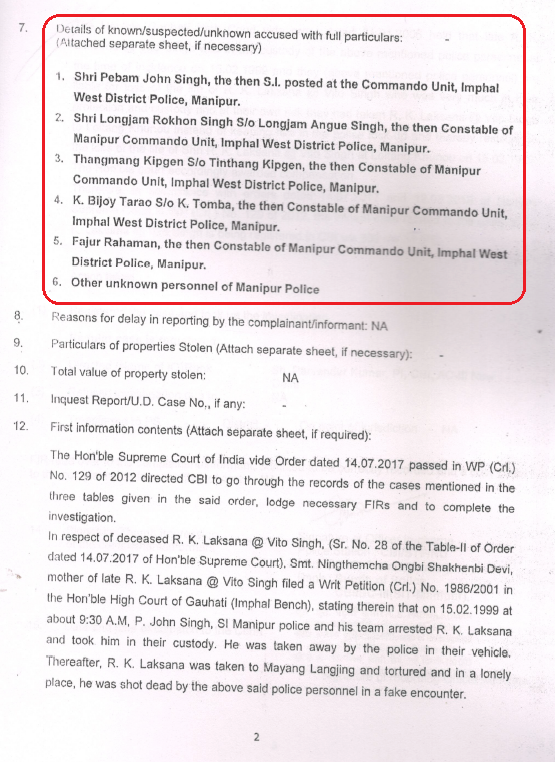 The new FIR registered by the CBI. It is one of the only ones which names policemen as the accused.

‘We are not satisfied with the progress’

The petitioners have told the court that the CBI is appearing to take the matter slowly and without intent to actually investigate.

“Even nine months since the Supreme Court first ordered probes, the CBI has neither finished registering FIRs nor complected investigations into even one single case of fake encounters. Not a single accused person has been arrested till date,” says Shreeji Bhavsar, the advocate representing the petitioners.

Acknowledging these grievances, the bench in January passed an order which said that it appears the matter is not being taken up by the CBI “with the seriousness that it deserves”.

In February, the bench strongly said that it appears the new FIRs were simply “re-registered and re-numbered” versions of the original ones filed many years ago, in which the dead people have been named as accused, and the killers have been cited as victims.

In that order the judges also said, “We are not for the present satisfied with the progress.”

By April, the court had some encouragement for the CBI and said, “considerable progress seems to have been made in lodging of FIR and in the investigations.”

However the same order, also records that many of those directly involved in these encounters – including those who were commanding these armed units – have been named in original FIRs but “inspite of this, the names of these persons have not been shown as accused persons in the FIRs that have been filed”. On this, they directed the investigators to file supplementary FIRs.

Petitioners say that the first batch of new FIRs which were filed in court in January 2018 had simply copied and pasted the testimonies given in the original FIRs filed many years ago. It is only the latest batch which has begun to acknowledge the orders already passed in many of these cases at various lower courts, many of which had ruled that fake encounters had occurred.

It is just that the lower courts had not gone any further in terms of prosecuting the perpetrators. But that is precisely what the Supreme Court is directing now.

“They know everything about us but we don’t know anything about what they are doing,” says Babloo Loitongbam, about the conduct of the special investigation team and the approach of the government inside the Supreme Court. Loitongbam coordinates the work of Human Rights Alert and EEVFAM who are the petitioners in this case.

“If this process doesn’t start crystallising the investigations towards specific officers and commanders, about which the information is already there, I don’t know how this will reach anywhere,” says Loitongbam.

Victims, activists and petitioners in this case are facing harassment and intimidation in Manipur, by local police.

“The families of the victims are waiting for justice and have high expectations of integrity from this process. Their faith must be sustained,” says Bhavsar.

Human Rights Watch issued this statement following an incident of violence at the house of Salima Memcha in April who is part of EEVFAM and fighting for justice for her husband, killed by the Assam Rifles in 2010. She wrote to the director general of police saying that her house was raided violently and she was threatened with “dire consequences”. Because of this, she was also unable to depose before the state’s criminal investigation department on that day.

There were two other similar incidents in February, with Ranjeeta Sadokpam and Manoj Thokchom. In January, the police barged into the residence of Sagolsem Menjor Singh and wanted to arrest him too, but would not produce a warrant for it. In October, a lawyer who has worked with some of these victims, Okram Nutankumar Singh, heard gunshots near his house. His complaint was not investigated by the police.