At the Heart of Army Officers' Protest, an FIR Against Colonel for Child's Killing

Inquiry by Justice Santosh Hegde had concluded that the 2009 incident in which Vijay Singh Balhara killed a 12-year-old boy in Manipur was not an encounter and no efforts were made either to capture or disable him. 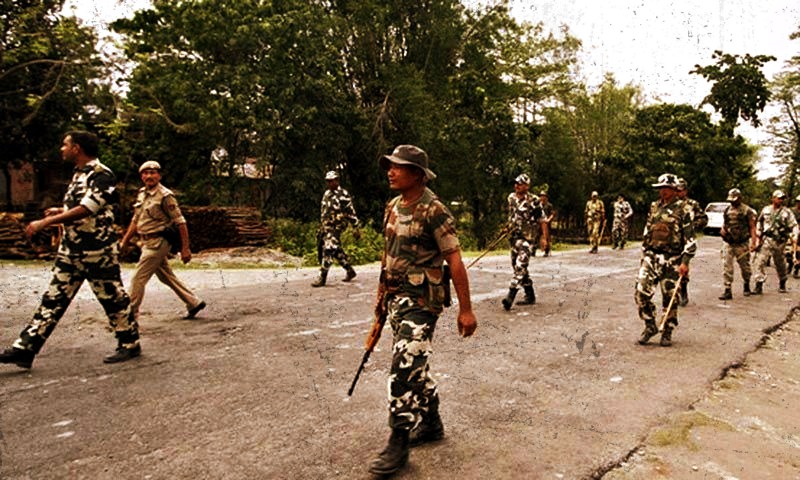 New Delhi: Mohammed Azad Khan was 12 years old when he was killed about 70 metres from his house in Manipur, allegedly by the Assam Rifles and the Manipur police.

Although the young boy died nine years ago – he was shot four times from behind him and two bullets hit him laterally – the men who were part of the “encounter” that March afternoon in 2009 never faced prosecution.

Last month, the Central Bureau of Investigation (CBI) filed a first investigation report (FIR) in the case, and named one Major Vijay Singh Balhara. Over the last nine years, Balhara has risen in the ranks and is now a colonel in the Indian Army. The charge against him and others is “murder with common intention”.

Their petition repeatedly grudges the fact that the CBI actually filed an FIR against Balhara and even named him in it: “This has severely affected the morale of many officers and troops.”

But is the FIR against Balhara unfounded?

In 2013, a commission of inquiry headed by Justice Santosh Hegde, former Supreme Court judge, looked into the killing of Mohammed Azad Khan. In a scathing conclusion indicting Balhara and the team he led, the commission said that the killing of the boy “was not an encounter nor was he killed in exercise of the right of self defence”.

Nine years after the boy was killed and five years after the commission of inquiry report, an FIR has finally been filed. If the Supreme Court has its way, an investigation into Balhara’s role as the head of that encounter will now begin. 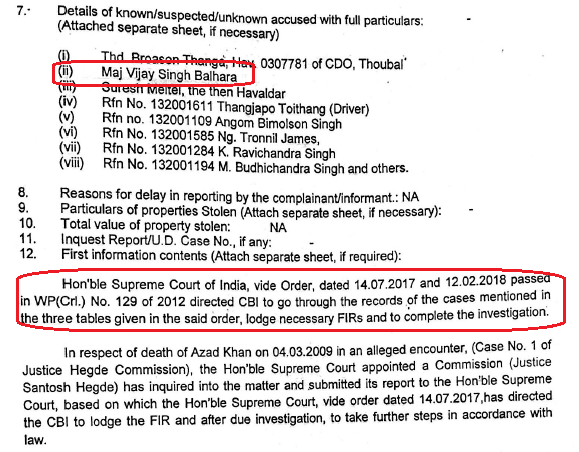 What the Hegde Commission said about the “encounter”

Balhara testified to the Hegde Commission that he had received an input from a “Grade A1 source” at 10 am on March 4, 2009 that there were two or three armed terrorists in an AFSPA-covered area who had come to extort money. By 11:50 am, Balhara had put together a team of about 20 armed men from the 21 Assam Rifles and the Manipur police, and reached Mohammed Azad Khan’s home.

The encounter went on for about “four or five minutes” and the boy’s family testified that they all were locked up in a room from which they could see the boy being beaten and shot. Neighbours also testified to the commission, backing the family’s narrative.

The Hegde Commission made a number of damning observations. It said that despite Balhara having a team of 20 armed men, they failed to take the boy captive. The bullet wounds inflicted on the boy were in his vital parts, which indicated that he was not shot merely with the intention of immobilising him. The security forces could also not claim that they had killed the boy as an act of “self-defence”, as they clearly outnumbered their “suspect” and none of them were injured either. Further, the incident took place in broad daylight and the location was not a jungle or hilly terrain, and thus the “suspect” could also have been pursued instead of killed.

The commission’s report says that the killing of Mohammed Azad Khan “was not an encounter and no efforts were made by the security forces, either to capture or disable the suspect”.

How Col Balhara was finally named in the FIR

The CBI has now filed about 40 FIRs and three chargesheets. As The Wire reported in May, the initial FIRs filed by the CBI did not name any accused and were unhelpfully filed against “unknown personnel”. They also reproduced the allegations against the dead victims themselves, copy-pasted from the original FIRs which were filed against the deceased by security personnel.

This February, the judges in the Supreme Court took notice of this trend of anonymity. In April, the judges again noted that no one was being named as the accused in the FIRs even though the original FIRs provided clues on the identities of the security personnel involved in that encounter.

The FIRs then began to name security personnel, but they were all at low levels of office, mostly from the Manipur police and not the armed forces – the FIRs were naming only constables, sub-inspectors, subedars and havildars.

As long as only junior personnel were being named, the armed forces fraternity was unperturbed. Their pushback began when high ranking officers were included in the FIRs.

The army pushes back

The FIR against Major Vijay Balhara matters; it displays the army’s resistance to accountability.

The pushback by the army has been substantial – Kumar’s father has approached the Supreme Court trying to get the FIR against his son to be quashed. The Chief Justice of India entertained his plea and the matter is ongoing. As for Balhara, 356 officers have filed this writ petition, and there are reportedly 400 more officers who want to be a part of the petition.

The army officers claim in their petition that FIRs cannot be filed against them. This is not true, even according to the Armed Forces Special Powers Act which provides them with some immunity. However, according to the law, the Central government does need to sanction prosecution once investigations are complete. This sanction can also be subject to judicial review.

If the armed forces keep up their pressure and obfuscation, and have their way, leave alone being prosecuted for their actions, even beginning an investigation may not be possible for thousands of victims around India.