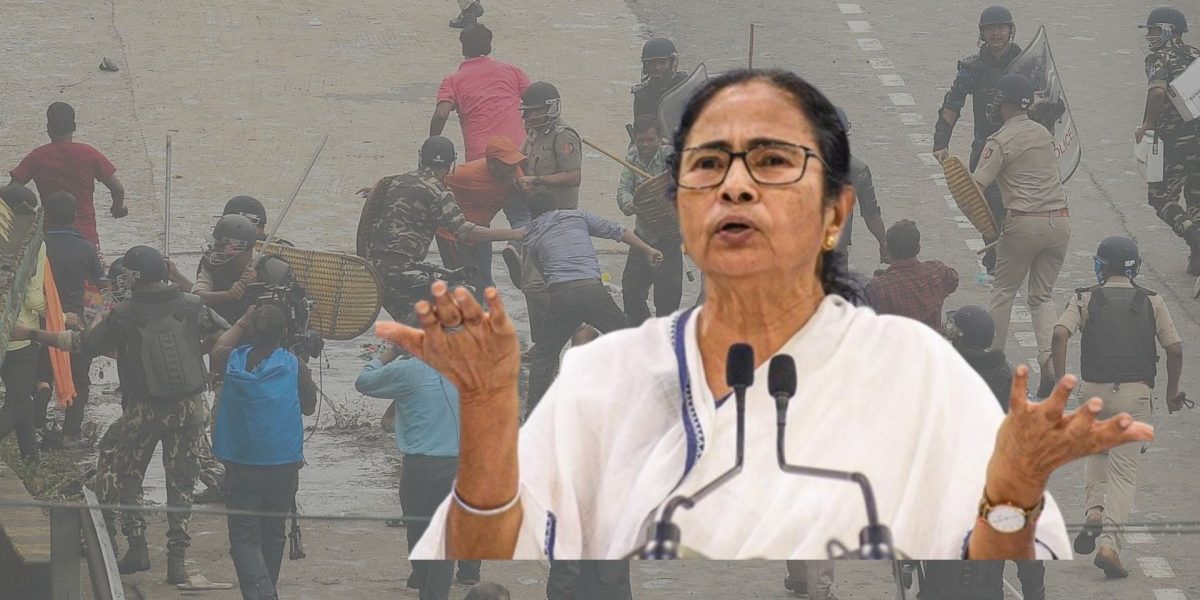 Mamata Banerjee. In the background, police baton charge on BJP supporters during their 'Nabanna Abhiyan '(March to Secretariat) in Howrah on Sept. 13, 2022. Photos: PTI

Kolkata: On Wednesday, September 14, a day after several policemen and Bharatiya Janata Party supporters were injured in clashes between the two during BJP’s march to the state secretariat, Nabanna, chief minister Mamata Banerjee alleged that the BJP members had assembled there with the sole intention of “goondami (hooliganism).”

“We don’t obstruct protests. In a democratic country, everybody has a right to protest in a democratic manner. There is no debate over this. But would you carry bombs and guns in your bags in the name of movements?” she said.

Following the incident, visuals of BJP supporters thrashing cops with sticks and setting fire to police vehicles and the police using sticks, water cannon and tear gas shells to disperse the gathering went viral on social media and also found prime time slots in national TV channels. Trinamool Congress Lok Sabha MP Mahua Moitra took to Twitter to ask if the state government, following the path of the BJP’s Adityanath government in Uttar Pradesh, should bulldoze the residences of those accused in attacks on policemen.

Banerjee’s political opponents, however, countered her statement on democratic space as factually incorrect. The government keeps denying permission not only to opponent parties but also social and rights-based organisations critical of the government for staging protests, they alleged. The BJP’s law violation programme itself was denied permission.

After the BJP formally sought permission from the police for the gathering at different parts of Kolkata and the neighbouring district of Howrah, on September 10, deputy commissioner of Howrah wrote to the BJP’s state office in-charge, Srijan Coomar, that the programme was not being allowed, as “Bangabasi, Howrah Maidan and GT Road areas are highly congested,” where the Tuesday market, called Mangala Haat, draws a large number of people for shopping. The letter also said gathering at Santragachhi would not be allowed as it is on the national highway and gatherings on national highways are illegal.

The letter also cited how a similar Nabanna Abhiyan in October 2020, carried out by Bharatiya Janata Yuva Morcha, the BJP’s young wing, had led to “breach of peace” and registration of four FIRs. The BJP’s application for gathering in different locations of Kolkata was also similarly denied. 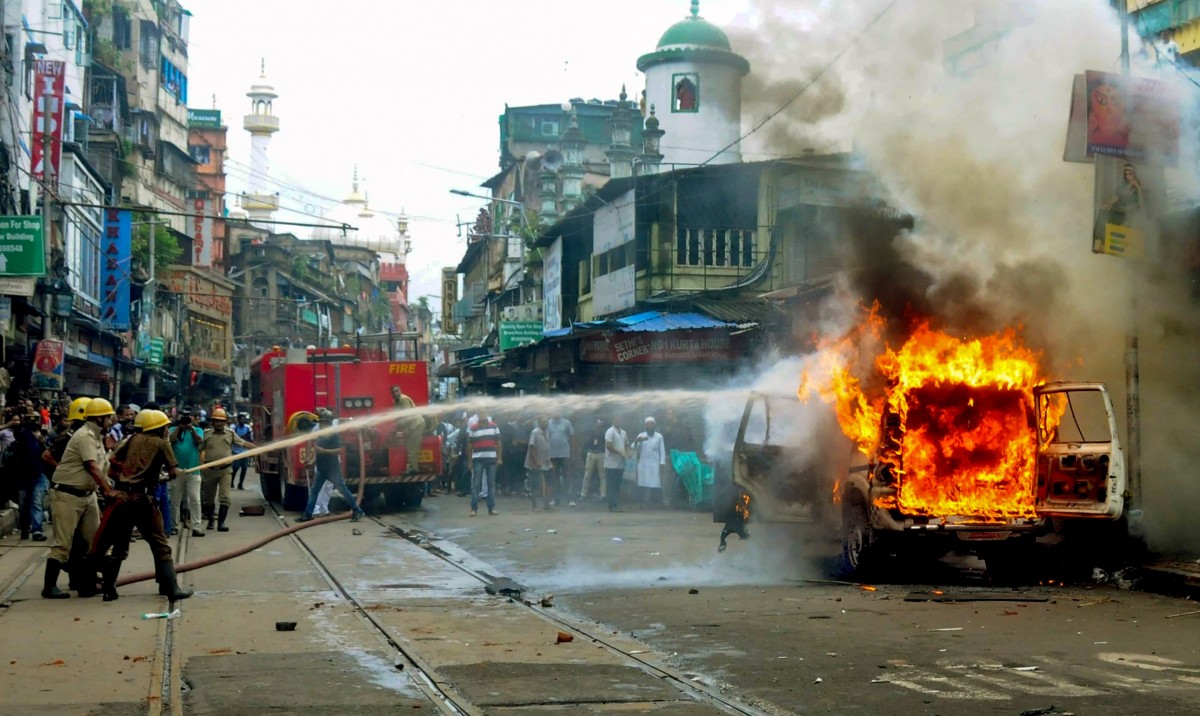 Firefighters try to douse a fire set in a police vehicle by some miscreants near Nakhoda Mosque in Kolkata, Tuesday, Sept. 13, 2022. Photo: PTI.

State BJP leaders decried this refusal of permission, calling it the curbing of democratic space, and went ahead with the programme. Strangely, though, they did not approach the court, as they had done in many previous instances when permission to the party’s planned events were denied by the administration.

“Refusal of permission to political programmes has become a norm rather than exception,” the BJP’s state unit president and Lok Sabha MP Sukanta Majumdar told The Wire, blaming Kolkata Police for the violence that took place during their protest. “Everybody saw how the police stopped our workers and supporters from boarding Kolkata and Howrah-bound trains from stations in the districts,” he added.

The BJP, however, is not the sole opposition party to make such accusations.

‘No space for opposition’

According to Mohammed Salim, the Communist Party of India (Marxist) state unit secretary, the Left has been regularly denied permission for protest gatherings since she came to power in 2011. He said that he has at least one police case against him in every district for addressing protest meetings without police permission.

“Soon after coming to power, she said that we should apply Leukoplast [an adhesive tape used to bandage wounds] to our mouths. She didn’t even want us to talk. Then the administration started refusal permission for every rally and public gathering. Later on, the police started implicating our workers in false cases of being in possession of contraband items like Phensedyl and ganja. Where has democracy been?” Salim asked.

“Once the police deny permission to an event, they even confiscate items belonging to the sound system provider and the decorators. As a result, they are scared of renting their items to us for our events,” he told The Wire.

He cited two recent examples. In the first case, the Left had called for a law violation event at the Curzon Gate area in East Burdwan district with the slogan “catch the thieves, fill the jails.” In the second, they called for a gathering in front of the CGO complex (which houses the CBI office) in Bidhan Nagar, in the eastern outskirts of Kolkata, a week before the BJP’s event. 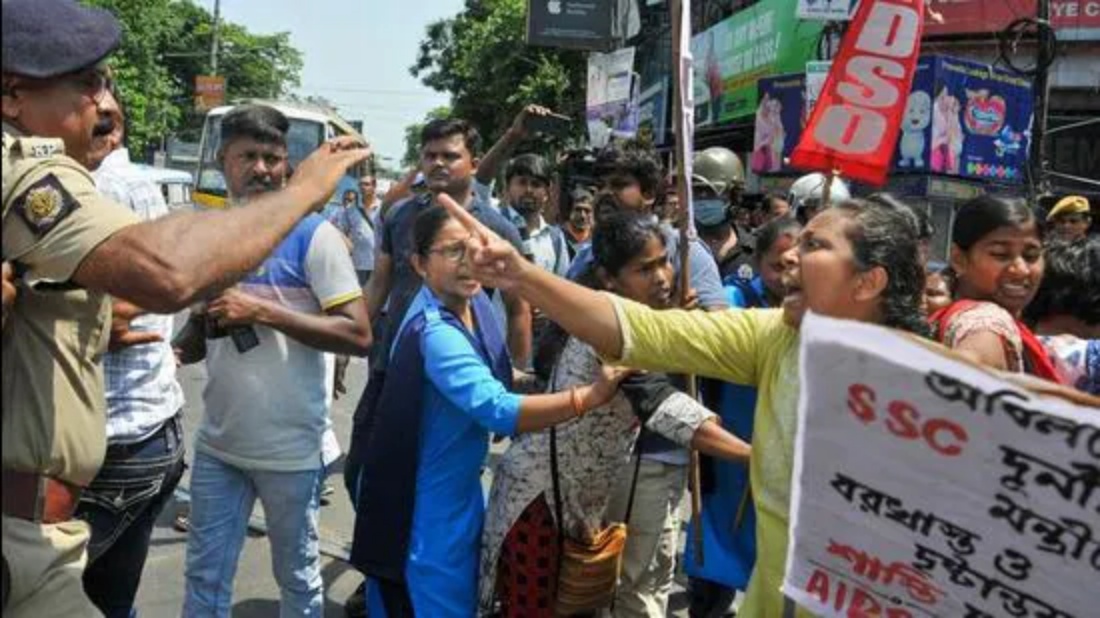 “In the Burdwan incident, we had informed the police about the event one month in advance. In a law violation programme, the standard administrative procedure has been to arrange for buses and arrest the protesters in the presence of a magistrate. Protesters come to court arrests. But here, they charged tear gas shells as soon as the demonstrators reached the venue. They denied permission for the CGO complex event,” Salim said.

In the Burdwan incident, on August 31, a clash broke out between the police and Left supporters when protesters tried to remove police barricades and the police resorted to charging tear gas shells. Protesters vandalised five police vehicles and uprooted an installation with the government brand Biswa Bangla’s logo on it. The police later arrested 46 persons, including CPI(M) central committee member Abhas Ray Chaudhury, who had to spend 14 days behind bars. The protest in Bidhan Nagar, however, did not turn violent.

‘TMC doing in Bengal, what BJP does at a national scale’

Congress spokesperson Ritzu Ghosal made similar allegations. According to him, the standard practice of the state police to the Left and the Congress has been not to respond to their letters or emails informing of events at all. The police do not say whether permission is given nor denied, but appear at the venue just before the event’s schedule, saying that permission was never given, he alleged.

“The TMC is doing in Bengal what the BJP is doing at a national scale. The Mamata Banerjee government systematically weakened the Left and the Congress, using the police and the administration on the one hand, and a poaching drive on the other. They forced a series of Congress MPs, MLAs, municipal corporators and panchayat members to join the TMC. All these are part of their grand plan to allow no space to us. This created space for the BJP and now the TMC and the BJP are engaged in a fake fight,” Ghosal said.

Ghosal asked why the state administration never obstructed Ram Navami rallies taken out by the BJP and Rashtriya Swayamsevak Sangh (RSS)-linked organisations where participants were seen carrying weapons, including in the hands of children.

The BJP, of course, denied the charge of being engaged in a “fake fight” with the TMC. They cite how the party has had to move court repeatedly to ensure their events take place.

In August, the BJP got permission for its rally in Tamluk town of East Midnapore district after the high court allowed it. In the same month, the leader of the opposition at the state assembly, Suvendu Adhikari, was stopped from reaching Netaji in Jhargram district even after he had taken advance permission from the Calcutta high court and the court had said that Adhikari, being the leader of the opposition, should be allowed to reach any corner of the state and it was the duty of the state police to provide adequate security. After he was stopped, the state’s advocate general faced the judge’s ire.

The same month, the police in Nandigram of East Midnapore district stopped Adhikari from taking out a rally, on the grounds that there was no permission for it. Adhikari is also the Nandigram MLA. Adhikari moved court against this, too.

The cases are still pending. 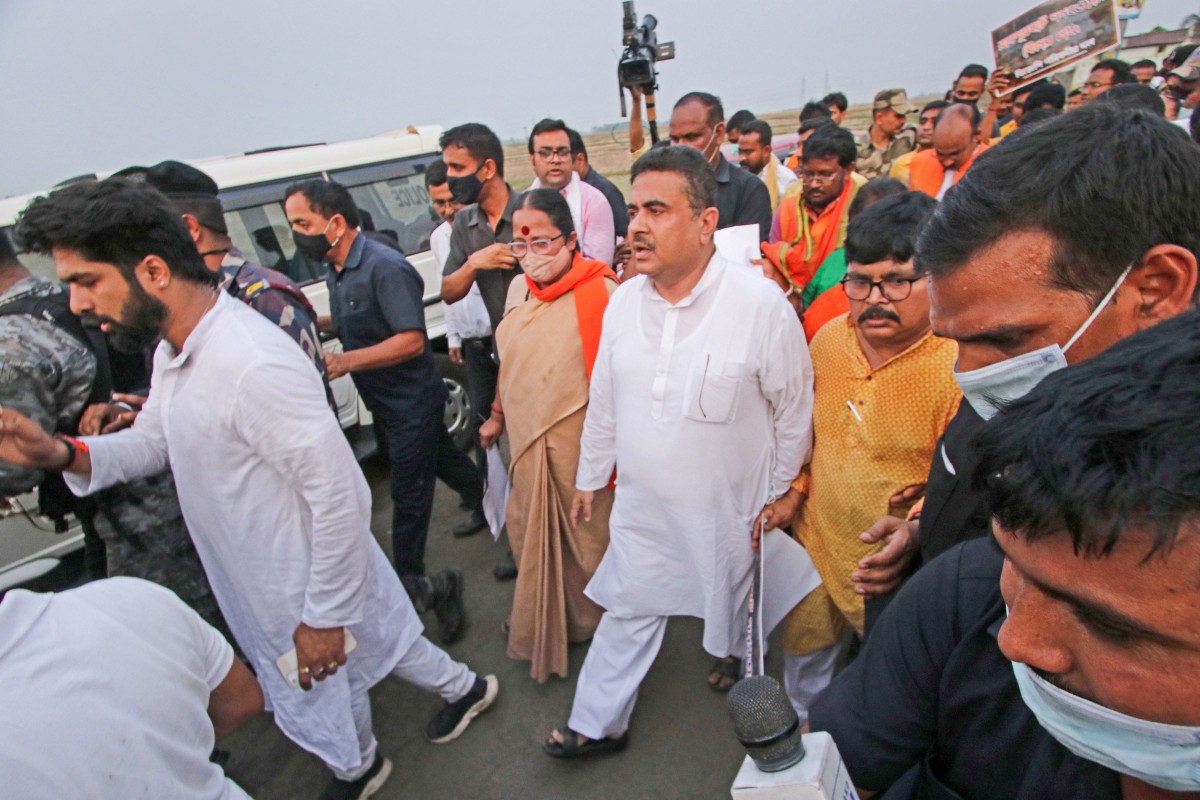 The TMC rubbished all these allegations.

“No democratic events are stopped from taking place, unless its organisers make public their intention of creating chaos well in advance. In every case where the administration denied permission, it will be found that organisers were creating provocation for violence right from the planning stage. Maintaining peace and law and order is the duty of the administration,” TMC Rajya Sabha MP Santanu Sen told The Wire.

It’s not politicians belonging to opposition parties who alone accuse the TMC government of curbing space for democratic protests. According to Anuradha Talwar, a food and farmers’ rights activist who heads the Paschimbanga Khet Majoor Samity, getting permission for protest events has been difficult.

“Not only is getting permission difficult but intelligence officers in the state police nowadays remain present and record even our indoor meetings. We don’t object, as we have nothing to hide. But this overzealousness of the police regarding democratic protests is surely a matter of concern,” she said.

Notably, Talwar was an integral part of the anti-displacement movements in Singur and Nandigram during 2006-08 that finally catapulted the TMC chief to the chief minister’s chair.

Speaking on the politicisation of the state’s police and administration under the TMC rule, Talwar said that after a movement by their tea workers’ organisation in northern Bengal gained momentum, the local police summoned its leaders at the dead of night and asked them to switch over to the TMC’s tea workers’ union.

“The police have not actively obstructed any of our events in the past six months. But last year they foiled our state conference in Hooghly district on the night before it was to begin, on flimsy arguments and use of force. Over the past few years, there have been many instances of denial of permission to our events and several of our organisers have also been arrested after being booked under sections of the Disaster Management Act,” Sur said.

Partha Pratim Biswas, a professor of construction engineering at Jadavpur University and a political commentator, said the administration should have allowed the BJP’s Nabanna Abhiyan event.

“It’s undemocratic to deny permission right away. Space for the opposition is essential to democracy. I was shocked to see, in news reports, how the police disallowed rally goers from boarding trains, arguing that the event had not been permitted. Countering opponents politically is one thing, but the use of the administration for this purpose is unacceptable and should be condemned,” Biswas said.

He argued that such measures usually appear counter-productive. “By denying permission for peaceful protest, the administration usually turns non-issues into major issues. The latest happenings around the protest in Kolkata would only benefit the BJP in hogging the limelight,” he said.