Make No Mistake, Progressive Indians Too Have Problems With Overt Muslimness

The "confused" civil society in India has been debating if it is conditioning or choice in the matter of hijab, because it can only give a free pass to Muslims who do not associate themselves with their faith.

Last week, the college panel had suspended seven girl students for coming to the college with hijab. Photo: PTI The Muslim woman is simultaneously hyper-present and absolutely invisible from Indian politics. She is at once nowhere to be seen in the parliament, and she is also the one who fills the discussions of all political spaces. She has been declared invisible for her choice of clothing and yet she is the only one they can see when there is a question on autonomy.

Hundreds of young boys and girls marched on the streets of Karnataka with saffron shawls on their shoulders to protest against the entry of hijab-clad students into classrooms and yet there was no debate on their agency. No one is worried about their conditioning, and no one is asking who is brainwashing them.

Also read: As Muslim Women Fight for Justice, Time for the Republic to Speak

A young woman named Muskan drives on her two-wheeler to her school by herself and faces a mob of saffron-clad men who are marching towards her chanting “Jai Sri Ram”. A slogan that has been repeatedly used during anti-Muslim violence. “Allah hu Akbar,” she shouts back, courageously standing her ground and asserting her religious identity fearlessly, and yet it is her agency that becomes the topic of prime-time debates.

A lazy and a dishonest debate

The rational faculties of Indian intellectuals have been violently shaken after this incident who seem very uncomfortably divided on how to emancipate the Muslim woman now.

The Muslim woman, after all, remains the most favourite emancipation project of people across the political spectrum. The nationalist man wants to emancipate her, by taking her hijab off her while the progressive man is busy writing the words that she should utter when she is faced with an intimidating mob.

How is it so that every time there is an orchestrated attack on the Muslim body for its religious symbols, the progressive society stays entangled in debating the validity of that symbol itself?

Not so long ago, it was the meat in Akhlaq’s fridge that became the subject of debates, and not the fact that he was lynched in a broad daylight. Years later, today it is the choice of words that were uttered by Muskaan in her protest, which has confused the civil society. One wonders if there was anything learned, ever.

Somehow it is always the Muslim who has to prove her perfect victimhood. The perpetrator enjoys impunity not just from his own ilk but also from a confused civil society, which refuses to join the dots to see the larger patterns of approaching apartheid.

We are stuck on a debate of conditioning versus choice in the matter of hijab. For a nation that has been under a very clear majoritarian communal fever, this debate seems just as lazy as dishonest. I wonder if the progressive section does anything more than justifying a comfort zone that it has built for itself.

Are we even at a point in history where we can afford to look at this attack in isolation?

This is not the first instance when a religious marker of Muslims has been used against them to exclude them from a larger social structure. From eating habits to beard, skull caps, and now hijab, it is clear that these are attempts to criminalise and racialise an entire community. As Alana Lentin and Gavan Titley have written, anti-semitism always involved a process in which “cultural attributes were racialised, seen as encompassing everything for which the Jews stood”.

One only has to see the fragmented Indian cities to witness the reality of this. Religious markers have constantly been used to segregate Muslims and isolate them in their ghettos, the story of which later gets to be told as self-segregation practiced by conservative/unsociable Muslims. The rule of division has always been central to the functioning of cruel regimes. 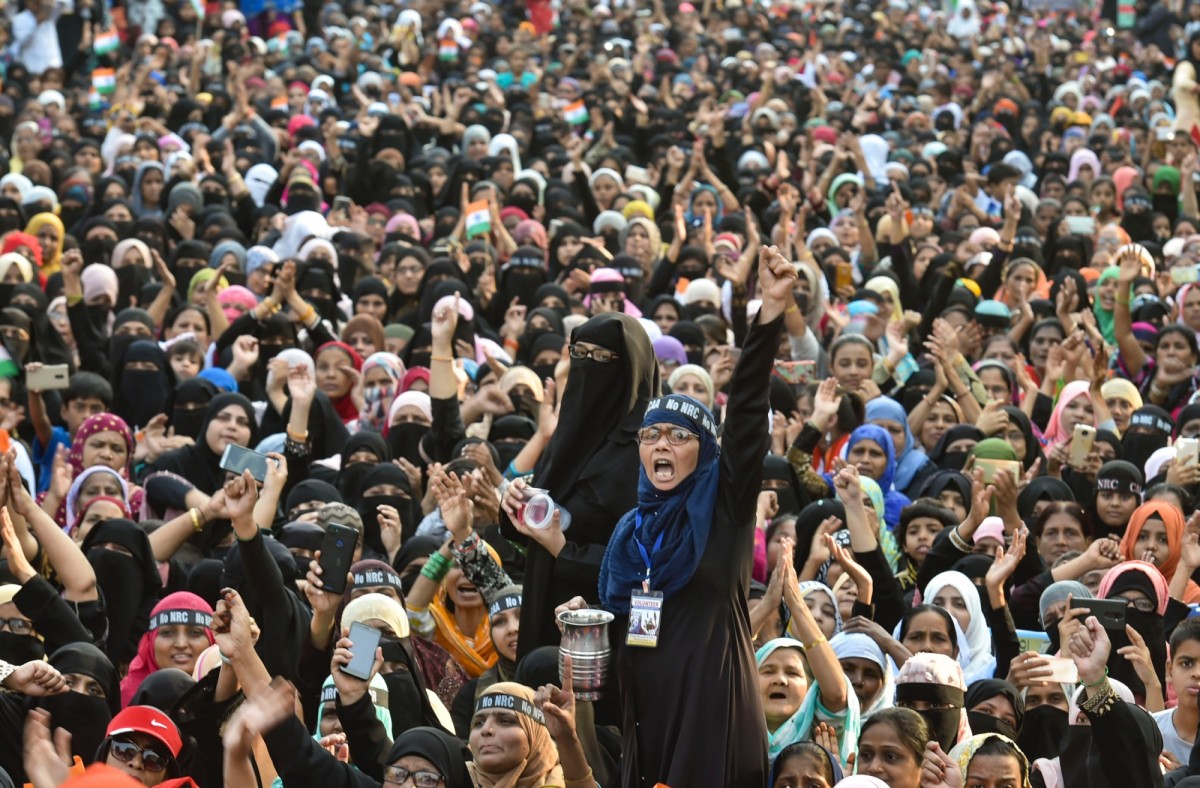 Protest against the NRC-CAA in Mumbra, Thane. Photo: PTI

In a country where Muslim women as a social group have abysmally low levels of education, the lowest work participation rate among all categories of work in the economy and a marginal presence in salaried jobs, such a move (hijab ban in this case) does raise question on the intentions of a government that has worked so hard on advertising itself as the saviour of the Muslim woman.

It is the same government that declared August 1 as “Muslim women’s rights day” corresponding to the day when parliament passed the triple talaq law. It is also the same government that abrogated Article 370 in Kashmir and celebrated it as a “victory for Kashmiri women” who could finally now pass property to their children if they wished to marry men of non-Kashmiri origin.

When the perpetrator of Bulli Bai was caught, there was an active attempt to dissociate the acts of the criminal from the wider ideological structure to show that it was an act of a disturbed pervert, one rotten apple from the lot.

An article in The Hindu described the mastermind behind the Bulli bai app as an online troll and a lone wolf. The article also expanded on the political affiliation of the people in his family, who happen to be Congress supporters.

How is it that even after being a criminal, his identity is given a free pass and his ideological leaning is still given a benefit of doubt, but the faintest assertion of identity by a Muslim is thrown under a microscope for evaluation of the validity of her victimhood?

Islamophobia, like other forms of racism, cannot be seen only as a problem of hate crimes committed by lone extremists. The acts of individual perpetrators can only be made sense of if they are seen as the product of a wider culture, in which glorifying racial violence is acceptable.

Is it really the hijab of the Muslim that should be under scrutiny or the value system of this society where progressiveness has an aesthetic criterion? Civil society should be critically asking itself: “Who designed the ideal outfit of the progressive woman?” and “Who are they unconsciously answering to when they are scared to stand with a minority community facing such segregation?”

There are two definitions that exist for the Indian Muslim. While the nationalists adhere to a rigid definition of a Muslim who cannot escape the fate of ultimately becoming a disloyal traitor, the more progressive section gives a pass to a certain category of Muslim – a Muslim who does not associate herself with her faith.

Also read: Dear Prime Minister, If You Really Stand With Muslim Women, Don’t Tell Us What To Wear

In either case, Islamophobia remains a completely unexplored territory of their unconscious selves. In neither of the cases, the Muslim subject has the permission to assert her protest with anything that resembles her religious background.

For ages, the protests of Muslims have been more apologetic than honest, in the hope of appearing more moderate than antagonistic. Perhaps because the rules of belonging and alienation differ across the religious borders. If it is always the Muslim who has to bear the weight of secularism on her shoulder, then do we even qualify for a secular nation?

An oppressive regime can never function without the consent of its majority. If constant attacks by the right-wing on the Muslim body still confuse civil society, then it should mean there is an implicit resignation of protest in the majority.

It should indicate there is something shared between the sensibilities of the right-wing and the progressive society of India that blinds them to the overall pattern of majoritarian domination. Oppression is not just outright denial of rights, it is also constant suspicion and it is also constant denial of agency.

Sara Ather is an architect based in Germany and India.