While the exercise is carried out on the Union home ministry's directive, the discretion of adding names and profiling people is entirely that of the state. Mumbai: Even as several human rights activists and lawyers in Maharashtra face harassment, arrests and police cases, the state police has made things worse by adding them to the list of “enemies” as mentioned under the Union home ministry’s “Union War Book”.

In a detailed district-wise operation, the state’s home department along with the intelligence department has identified many human rights activists, lawyers, and academics and has begun the work of profiling them, almost like criminals, adding them to the ‘Union War Book’. This document, maintained by the Union home ministry, dictates the exact role each government ministry, department and wing will play in times of war but also has a directory of sorts of those it considers to be “enemies of the state”.

While the exercise is carried out on the Union home ministry’s directive, the discretion of adding names and profiling people is entirely that of the state.

The profiling began early July, when a few junior officials from the Nagpur police came knocking on the door of city-based lawyer Nihalsing Rathod. The constabulary, directed by the Nagpur Special branch, had carried a pile of papers, which mentioned the names of several persons and the and categories under which they had to be evaluated. Rathod, an established human rights lawyer who is representing several persons arrested in the ongoing Elgar Parishad case, was categorised as a “caste social conflict agents’ provocateurs”.

Rathod isn’t alone in the list. Surendra Gadling, also a Nagpur-based lawyer who was arrested for his alleged role in the Elgar Parishad case, his wife Minal Gadling, his associate lawyer Harshal Lingayat are also mentioned under this category. Gadling’s co-accused and a former professor at the Nagpur University, Shoma Sen, also finds a mention in the list.

The list says the lawyers should be profiled for being associated with the Indian Association of People’s Lawyers (IAPL). Most lawyers who were arrested and questioned in connection with the Elgar Parishad case are directly associated with the association. During the Devendra Fadnavis-led government, the organisation was accused of being a “Maoist front”. The lawyers have, however, denied the charges.

These activists and lawyers have been added under ‘Category C’ of the Union War Book, which calls for “surveillance at all times for as long as may be necessary”. 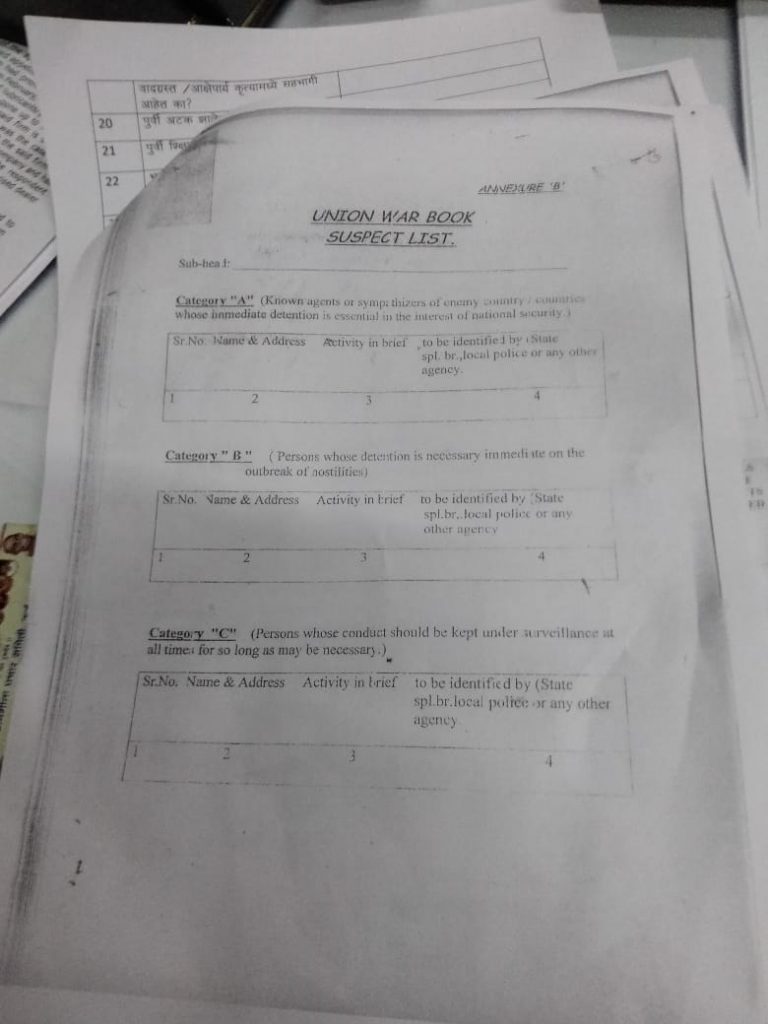 Rathod says three constables had visited his office on July 7 and demanded all his legal documents, including his Aadhaar card and bank details. “The proforma had a list of documents. They asked to check them all. Along with my documents, they also wanted me to hand over details of my friends and relatives,” Rathod told The Wire.

Rathod was also asked about his work and his political and social views. “Are you casteist?” one of them asked. The police personnel also wanted to find out if Rathod is or was likely to take an “anti-government stand”. Bizarre as they may be, these questions were all mentioned in the proforma that the officials had carried.

The list of 33 questions included details of educational qualifications, social media accounts, passport number, PAN and Aadhar card details, political leanings, names of family members, locations they visit regularly, physical appearance, birthmarks among others. “These questions are meant for those with criminal antecedents. The local police persons who had visited me had no idea what that form meant. I simply refused to respond to them,” Rathod shared.

The lawyer has already sent a letter to the Maharashtra chief minister and home minister, seeking an explanation for why he was placed on the list.

The Union War Book, which has existed since the colonial era, is periodically revised, depending on the security concerns of the time. The book is a compilation of voluminous documents that mention minute details of security threats, ground realities and the essential state preparedness at the time of security crisis.

An annexure to the book, accessed by The Wire, lists 18 different categories of “suspects”. Some categories include “known agents/ sympathisers of Pakistan among non-Muslims”, “known agents/ sympathisers of Pakistan among Muslims”, “LTTE/ Sri Lankan militants”, “Naxalites and allied left-wing extremists”, “communal elements amongst Hindus/ Muslims”. Annexure A, which lists the different categories of suspects.

A way to harass, say lawyers

Though unclear why lawyers and rights activists have been added to the list, Lingayat, whose name also appears in the list, says the aim of the exercise is only to harass them. “The very nature of our (lawyers’) work is being in the public domain. Who we defend and our line of arguments are all in the court’s record. Still, the government has from time to time, targeted us for the work we do,” Lingayat feels. He and Gadling have worked on several cases registered under the Unlawful Activities Prevention Act (UAPA).

Lingayat and Rathod both feel that their profiling should be looked at as just an addition to their ongoing harassment. The Pegasus Project, a consortium of 16 international media houses, of which The Wire is also a part, had recently revealed that the phones of Rathod, Gadling and his wife Minal, Sen along with several others charged for their alleged role in the Elgar Parishad case could have been potentially targeted by the military-grade spyware owned by the Israeli company NSO Group.

Lingayat’s email id, on the other hand, was allegedly morphed and used for malware attacks on Gadling’s laptop. Arsenal Consulting, a Massachusetts-based digital forensics firm, in its recent report, uncovered details of malware attacks made on Gadling’s computer using email IDs of persons close to him. These emails were used to plant documents, which later became a part of the “evidence” used against Gadling and 15 others arrested in the Elgar Parishad case.

From time to time, the “requirements” of the Union War Book are tweaked and the ‘threats’ are redefined. Sources in the state home department said that the recent exercise was done on the Union home ministry’s directive and is being carried out across the state.

The list accessed by Rathod and later reviewed by The Wire mentions names of only those residing in the Nagpur region. “There are multiple lists drawn for other districts too,” a senior bureaucrat, on the condition of anonymity, told The Wire.

The list of people in the Nagpur region identifies a disproportionately high number of persons from the Muslim community and Bahujan caste locations.

Among other people under watch are “Hawala operators”, “communal agent provocateurs”, and “other anti-social elements”. The Wire contacted several people mentioned in the list. Most of them said they have not been contacted by any police official yet.

Senior lawyer Anirudha Dube, whose name appears under the “caste provocateurs” list, told The Wire that he was unsure why the police would profile him for such a list. “I handle regular criminal and civil cases,” he said. Dube has been a member of the Bar Council multiple times and is a well-known senior lawyer in Nagpur.

Arvind Sovani, a Nagpur-based college professor, and founder of Bhumkal Naxal Virodhi Sanghatan, is also mentioned in the list of suspects to be profiled. Sovani, when contacted by The Wire, said he did not know about the list. He declined to comment further.

An order issued by Nagpur special branch deputy commissioner of police Basawraj Teli states that all “suspicious persons” are to be monitored and profiled before July 10. The notice mentions that this is a bi-yearly exercise. The Wire contacted Teli for his comment, who first claimed he was busy and later did not reply to multiple phone calls and messages sent to him. The story will be updated as and when Teli responds.

Before embarking on their field visits, every police person on special duty has to be imparted ‘special training’. “Senior police officers should impart training to subordinate officers for at least 100 hours every year on the matters of new laws and challenges,” one of the notices, issued by ADG (Training and Special Units) Sanjay Kumar on June 4, states.