'In our view, the connection between Ranjeet Soni’s murder and his use of the RTI Act to access information and expose alleged corruption or irregularities cannot be denied,' a fact-finding team has noted. 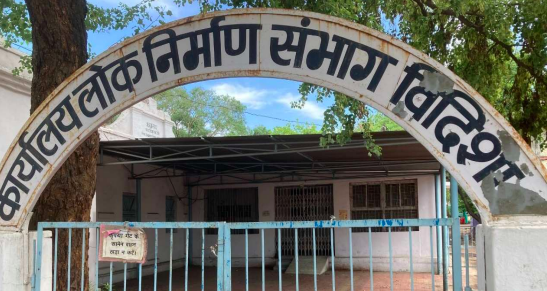 The courtyard inside the gate of the PWD office where Ranjeet Soni was killed. Photo: Fact-finding teams' report.

New Delhi: A month after an RTI activist in Madhya Pradesh’s Vidisha was shot dead at a government office, a fact-finding team has released a report noting that he had been under severe pressure from local government contractors to stop his activities.

The team travelled to Vidisha on June 19 to meet the family of Ranjeet Soni, who was killed on June 2. It comprised Anjali Bhardwaj, Rolly Shivhare and Amrita Johri who are members of the working committee of the National Campaign for Peoples’ Right to Information; Ajay Dubey who is board member of Transparency International, India, and Santosh Malviya who works with Dubey in Madhya Pradesh.

The report states that Soni’s widow Gayatri said that he was most recently pursuing issues related to fake Fixed Deposit Receipts (FDRs) made by certain contractors in collusion with officials to bid for government contracts.

Soni himself was a contractor on government works but stopped working with two of those arrested for his murder – Jaswant Raghuvanshi and S. Kumar Choube – after a falling out. Police have arrested three others, including the shooter Ankit Yadav who was allegedly assigned the task.

Soni had been using the RTI Act to access details of public works and government expenditure and would file complaints against irregularities he had noticed. Local journalists told the fact-finding team that over 130 RTI requests had been filed by him.

Soni had not just been collecting information but also seeking redress.

Based on the RTI replies, he filed complaints to various authorities including the Lokayukta, public works department and the Chief Minister’s Office seeking appropriate action into the allegations.

“A perusal of the RTI applications filed by him show that in several cases he was seeking information which in any case should have been proactively disclosed by the concerned public authority as required under Section 4 of the RTI Act,” the fact-finders’ report notes.

The fact-finding report notes the discovery of several RTI applications made by Soni to unearth allocations and acquisitions at government hospitals, eligibility of persons appointed for government jobs, and details of road constructions. In 2016, Soni filed a police complaint alleging a physical attack by Raghuvanshi and his people over an RTI on road construction deals filed by him. Raghuvanshi allegedly also got a person, who Soni alleges he did not even know, to file a case under the SC/ST Act against him.

In April this year, S. Kumar Choube wrote to the Divisional Project Manager of Vidisha’s public works department, asking to be informed if information is provided to Soni under the RTI. The family, even before Soni’s death, had made significant changes to their lives to accommodate the shift in Soni’s profession, even selling their house and moving when payments to Soni stopped due to “action by these contractors.”

Crucially, the day after Soni was killed was when the next hearing of a case arising from a dispute of a bounced cheque allegedly given by Soni was scheduled. Gayatri and Soni’s lawyer told the team that evidence of corruption against the contractors was to be presented on that day.

“In our view, the connection between Ranjeet’s murder and his use of the RTI Act to access information and expose alleged corruption/irregularities cannot be denied,” the team notes in the report.

In addition to the criminal investigation into the murder of Soni, other related aspects also need to be pursued strongly, the report says, especially stressing on his complaints to various divisions of the government.

“The family is in deep financial crisis and the government must provide immediate compensation to the family,” the report also says, noting his wife’s meagre earnings of Rs 2,000 per fortnight as a handicrafts trainer and the fact that that couple have two schoolgoing children.

Publicity to information being pursued by people who are killed potentially acts as a deterrent against such attacks in the future, the report observes.

It also recommends the setting up of an inquiry committee, headed by a senior PWD official from outside the district, to probe into the various complaints of corruption and financial irregularities filed by Soni to the PWD.

In addition to fast-tracking the Lokayukta complaints that had been filed by Soni and a thorough police probe into his death, the fact-finding team also asks for a policy or law to provide protection to whistleblowers and people exposing corruption.

“…[The] Whistle Blowers Protection Act which was passed by Parliament in 2014 but has not been operationalised till date as the
Central government has not notified the requisite rules,” the report observes.