'I Pretended to Be Dead': Lone Survivor of Attack on Bengal Labourers in Kashmir

Since August 5, the attack in Katroosu has been the sixth of its kind targeting non-locals.

Zahir ud Din Sarkar, who was shot at by suspected militants in Kulgam on October 29, at a Srinagar hospital. Photo: The Wire

Srinagar: On the night of October 3, Zahir ud Din Sarkar, promised his wife that he would buy her a pair of golden earrings. Sarkar was preparing to travel to Kashmir and had to catch a train next day.

The 27-year-old and his wife had just been married for two months.

On October 6, Sarkar and six others from his native village of Bahan Nagri in West Bengal reached Kulgam district in southern Kashmir. The group got a job at a sleepy hamlet of Katroosu as daily-rated labourers in apple orchards. October is the peak of harvesting season in the Valley and the dearth of labourers pushes the wages up by a few hundred rupees.

Sarkar saw it an opportunity to fulfil the promise he made to his wife.

Kulgam and other southern districts including Anantnag, Pulwama, and Shopian are considered to be volatile and stronghold of militants. All four districts have apple orchards in abundance and horticulturalists describe them as the ‘apple bowl’ of the Valley.

New Delhi’s decision to read down Article 370 and the restrictions, communication gag, and the advisory from the government asking non-locals to leave that came with it has hit Kashmir’s apple industry very badly. However, the revocation of the travel advisory brought some hope for apple growers as non-local labourers began to return to the Valley in small batches.

Despite the tension and attacks on migrant labourers during October, Sarkar and the men from his village decided to brave it out. However, on the evening of October 29, Sarkar finally called home and told his wife that he was returning the next day.

Sarkar was thrilled with the prospect of meeting his bride. However, an unusual knock at the door of his rented room startled him.

“A masked man brandishing a rifle asked all of us to get down silently or they would shoot us,” said Sarkar. “Three other men, also carrying weapons, were waiting downstairs.”

One of the seven labourers, Bashir ud Din, had gone to fetch dinner from the local house with whom they worked in the apple orchards during the day.

The masked gunmen took their hostages up the dirt road heading toward the nearby Shalipora village.

“After 10 minutes of walking, the gunmen made us sit on the ground, facing the orchards,” said Sarkar. “Before we could say anything, they fired on us from behind.”

Also read: Doval’s Dog and Pony Show for MEPs Is a Disaster for Indian Diplomacy

From the corner of his right eye, Sarkar said he saw his co-workers falling down and staying motionless.

“I pretended to be dead until the villagers came to help,” he said.

While five labourers were killed on the spot, Sarkar, who had a miraculous escape, is undergoing treatment at Srinagar’s Shri Maharaja Hari Singh (SMHS) hospital.

The J&K police has blamed militants for the massacre. However, so far, no militant outfit has claimed responsibility for the attacks on non-locals. Since August 5, the attack in Katroosu has been the sixth of its kind targeting non-locals. Eleven people, including truck drivers and fruit traders, have been killed 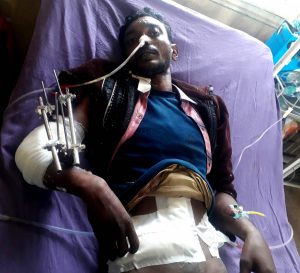 Zahir ud Din Sarkar, who was shot at by suspected militants in Kulgam on October 29, at SMHS hospital. Photo: The Wire

Sarkar has four bullet wounds. A doctor treating him told The Wire that one bullet has hit his abdomen, causing a perforation in his small intestines. Another bullet has resulted in “compound fracture” in his right arm while two bullets have hit his right leg, inflicting “severe damage”.

“It is a miracle that he is alive,” the junior doctor said. “It will take him many months to resume a routine.”

Inside ward 16, Sarkar lies on bed number 1, writhing in pain.

“Will I survive, please tell me the truth,” he asks Ishfaq Ahmad, a visitor from Kulgam village, who had come along with his friends to inquire about Sarkar.

According to Ahmad, the entire village is in grief and shock over the killings. Sarkar and others had been coming to Kashmir regularly for the past few years.

“This morning he talked to his wife over the phone. He was in tears trying to reassure her that he was fine and would return soon,” said Ahmad.

“We used to come here for earning a livelihood,” said Sarkar. “I can’t understand why we were targeted.”

Traumatised, the young man has been unable to come to terms that the other workers from his village are dead.

“The thought of going home without them is scary,” said Sarkar, wiping away tears. “What will I tell their families?”