The protestors expressed solidarity with the nationwide strike in India and opposed the CAA, NRC, while condemning the attacks on students.

Protesting students and members of the diaspora outside India House. Photo: Ruhi Khan

London: Indian students brought the hugely successful Occupy Gateway of India mode of protest to London, staging a sit-in at the India House. Protesting students and members of the diaspora organised a sit-in outside the High Commission of India on January 8 from 8 am to 8 pm with a line up of poets, artists, students and academics speaking on a whole gamut of topics, holding teach-ins and performances that show resistance to the “Indian government’s repressive moves and brutal crackdown across universities and minority communities”.

This protest was held to express solidarity with the national strike in India on Wednesday, where an estimated 25 crore people of the working class protested against the “anti-people, anti-worker” policies of the government. Students joined in to demand equality and affordability of education and democracy and gender sensitisation on campuses in India. The strikes also protested against the draconian Citizenship (Amendment) Act (CAA) and the National Register of Citizens (NRC) that threaten to divide India along communal lines. 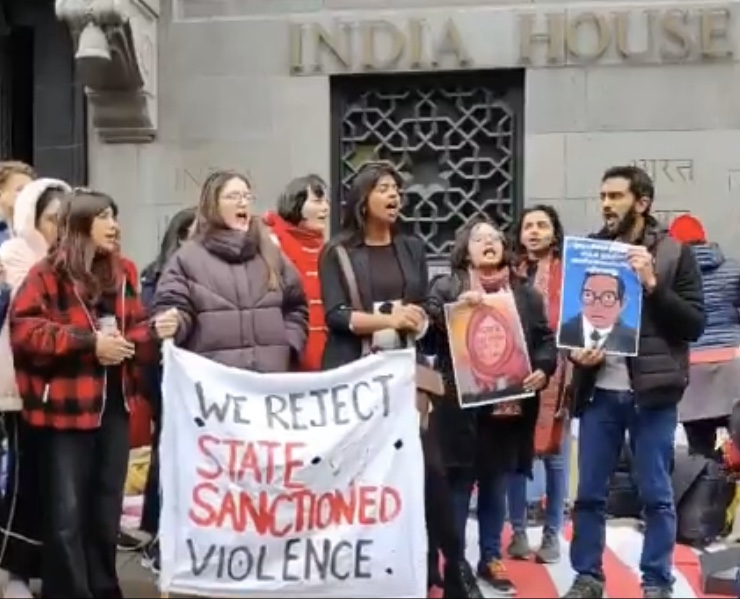 Rahul Rao, a senior lecturer in politics at SOAS, spoke about how the citizenship law in India has changed over the post-independence period. Calling Anupama Roy’s book Mapping Citizenship in India, a sort of a “biography” of the Citizenship Act, Rao recounted the ways in which the Act has been amended.

Regarding the current situation, Rao argued that “the cumulative result of the restriction of citizenship of those within the state and an extension of citizenship to those outside the state” shows how the Indian citizenship law “is increasingly beginning to resemble a form of Zionism”.

There is a great influence of Bhagat Singh’s thought in these protests, said Chris Moffat, a British Academy postdoctoral fellow at of Queen Mary’s University, London. Moffat argued that Bhagat Singh was a compelling figure for those interested in politics because “he is an icon of heroic commitment to a cause and of self-sacrifice who stood up against tyranny speaking truth to power” and in that way encouraged protesters to keep fighting using slogans like ‘Inquilab Zindabad’ which challenge power and authority. 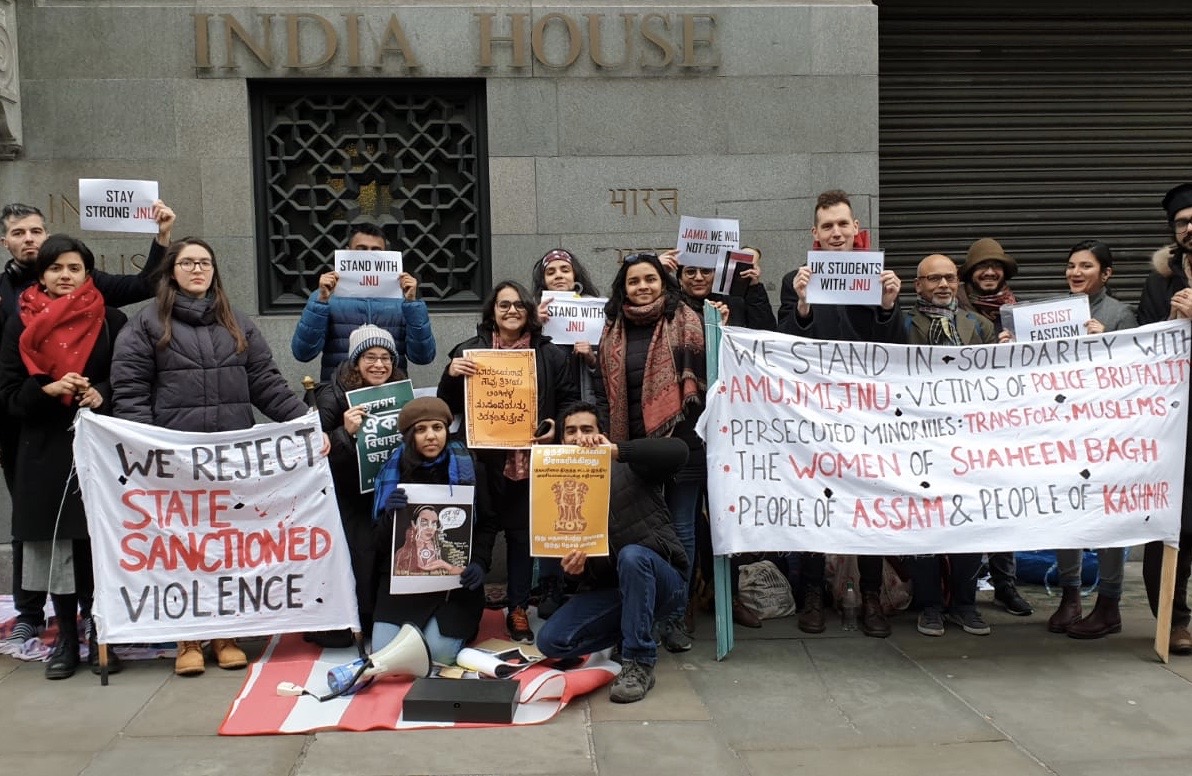 Moffat also spoke about how right-wing forces in recent decades “hold onto Bhagat Singh as a masculine vigilante figure” and this needed to be challenged. “A battle about history is also a battle about the present. The contemporary moment is haunted by the past, the dead are angry.”

Slogans of Azaadi and Halla Bol echoed along the busy Aldwych road. Kurdish students dropped in to wish Indian students the best with their protest and said azaadi was also an important word in Kurdish movements. “The most important slogan in our movement is Jin, Jiyan, Azadi – Women, Life, Freedom – and also Berxwedan Jiyane – Resistance is Life. With these slogans I want to show solidarity and here’s to building a revolution of people of internationalism against all these oppressive states,” said a member of the London Kurdish Society.

To understand how and why fascism is rising in India, we need to go beyond the BJP, argued Waseem Yaqoob, who teaches history of political thought at Queen Mary’s University. “The connection between colonial rule, fascism and India needs to be made and needs to be understood. Kashmir, from the very start, was a colonial occupation, not in the simple sense that a government that does not represent the will of the people but of a government that uses the tools of the empire, the harshest and the most brutal tools to implement a communal war in Kashmir.” 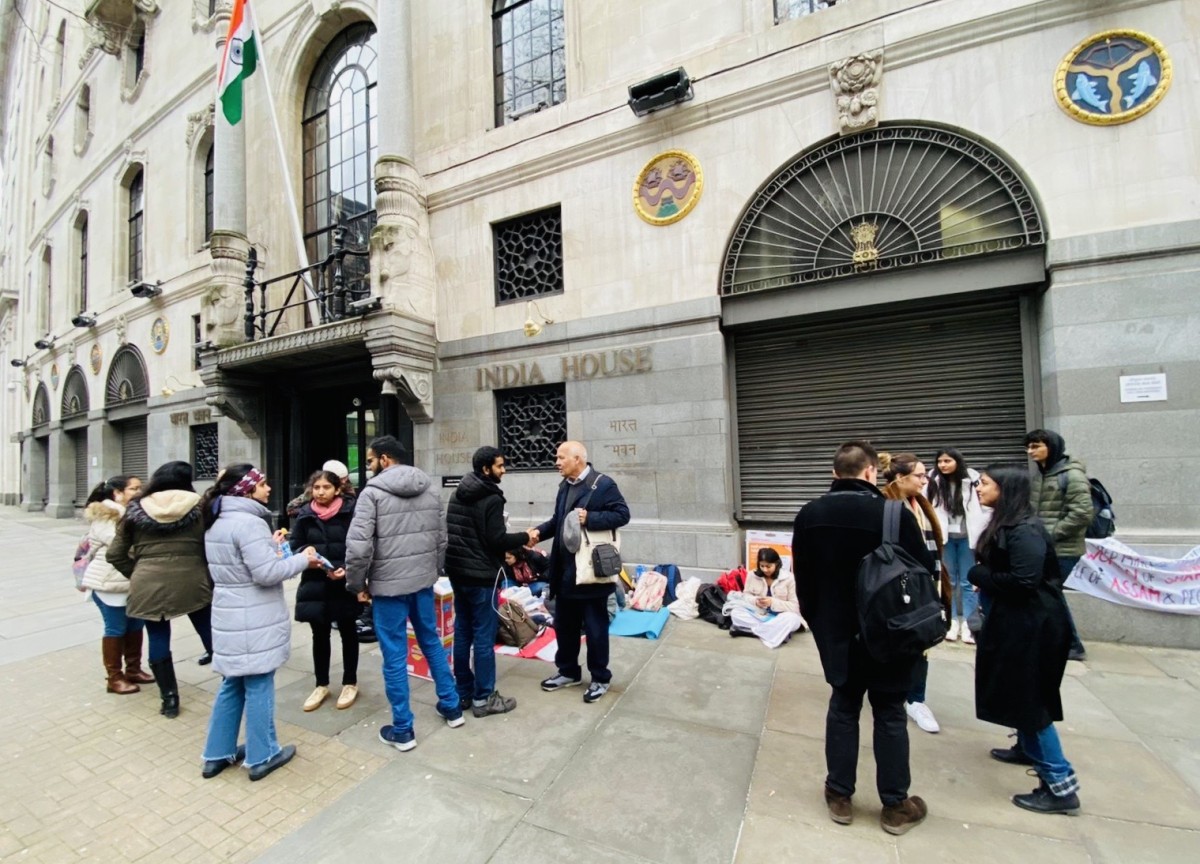 Protesters outside the High Commission of India in London. Photo: Ruhi Khan

The Occupy India House protest saw the idea of JNU’s open-air protest lectures successfully manifest on a chilling winter day in London. Indian students on foreign shores united with their counterparts in India, joining the collective resistance and rage against an oppressive system.