Since Lockdown, It's No Longer Business as Usual at Mumbai's Century-Old Dumping Ground

The ones who earn from selling discarded waste find themselves pushed into unchartered territory, with the closure of markets and the persistent disease threat. 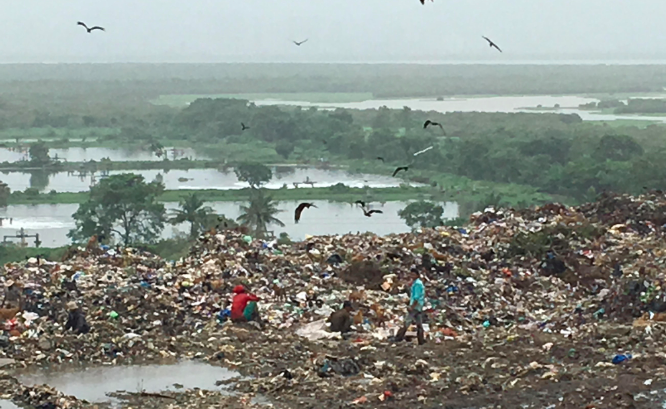 The edges of the Deonar dumping ground. Photo: Author provided 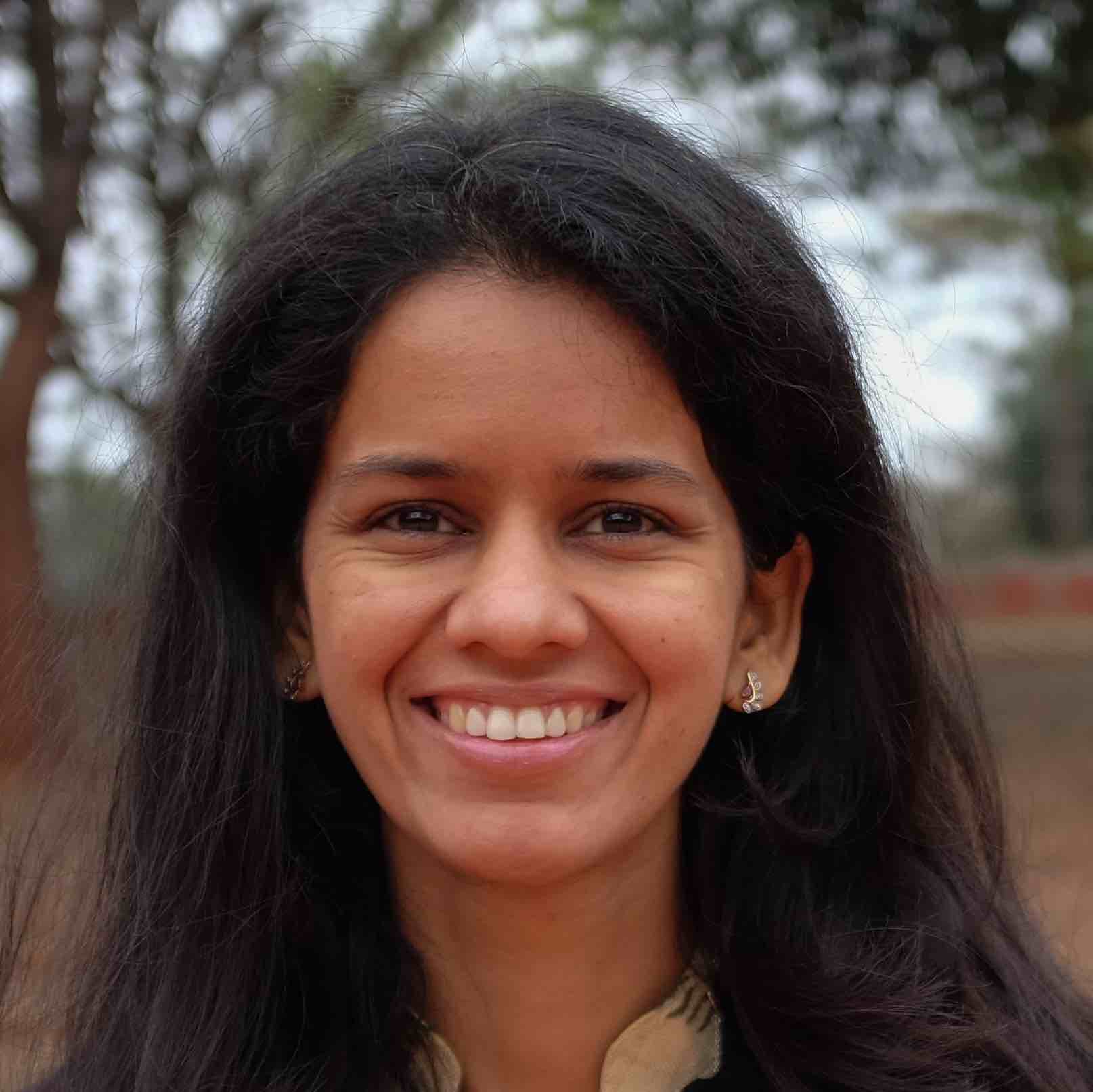 Lilabai Pawar brought back more than 100 kilos of trash from the Deonar Dumping Ground in the first few days since the lockdown began.

She collected wispy, squashed plastic bottles, as she had for more than 20 years. She filled them into plastic bags until they got bigger than her own slight frame. She carried them back to her house at the edge of Mumbai’s sprawling garbage dump, covered it carefully in plastic and kept it in a neighbour’s empty shed for safekeeping.

There was nowhere to sell them.

The traders who bought trash from waste pickers, such as herself, had shut shop since the national lockdown on March 23. “Aaj nahi to udya vikel.” (‘It will sell later, if not now’), she said, stretching hope. She worked on for days, earning nothing.

She worried that rats would cut through the bag and her trash would rot. She had heard waste infected with coronavirus was being buried in the far edge of the garbage dump. She heard some of the guards had been infected by it, and feared that this was making her vulnerable to it too.

Lilabai’s days thus began at home. She waited for the food that non profits distributed in their lanes. “Kadhi bhetto, kadhi bhetat nahi pan paryaye pan nahi na (‘Sometimes it comes, other times it doesn’t. But there is no alternative’).” 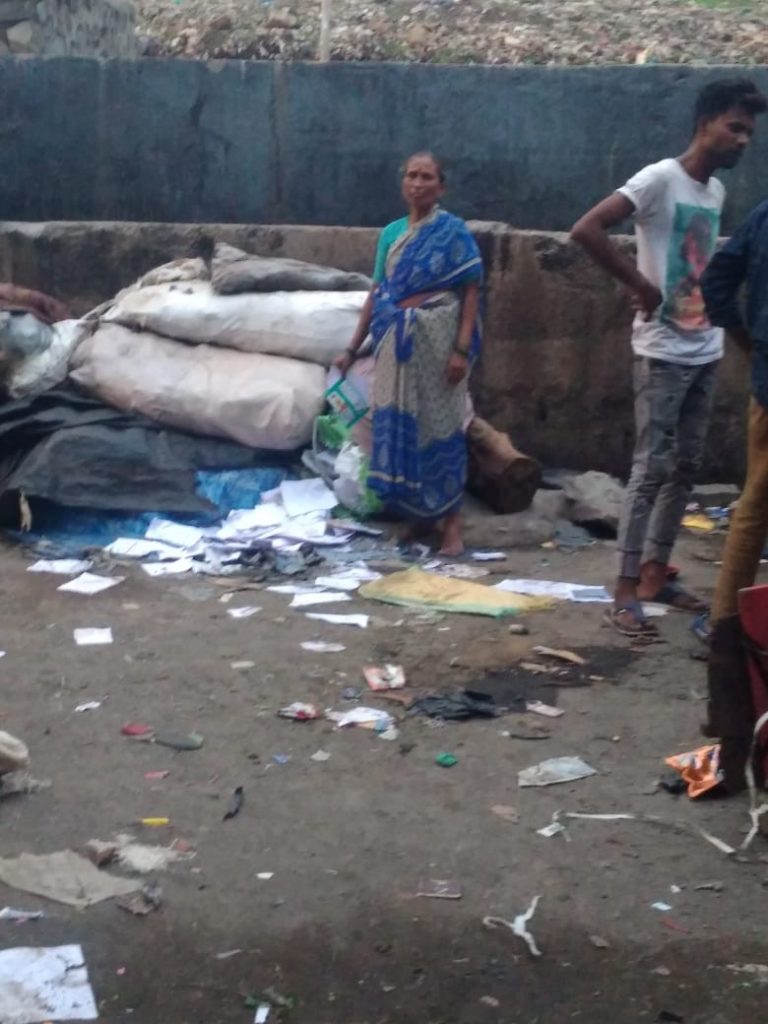 A woman at work with collected garbage at Deonar. Photo: Author provided

Life at the rim of the 320-acre garbage dumping ground can be precarious at the best of times. Life expectancy was 39 when Mumbai’s Human Development Index last calculated it, in 2009. Living in dense lanes and small homes has made this a global hotspot for tuberculosis, drug resistant tuberculosis and a host of other diseases.

The coronavirus and the lockdown has brought life here to an edge like never before. Residents have had to step out of homes often: to use community toilets and collect water or food, making social distancing and the lockdown hard to impose. The ward these slums belong to quickly became among the worst affected in the city.

Also read: At the Deonar Dumping Ground in Mumbai, People Barely Make It to the Age of Forty

With nearly 2,000 COVID-19 cases, doctors say they now struggle with beds, ventilators, oxygen and anything else they need to treat patients. For those who are not sick, hunger stays close. Not surprisingly, those who can, are leaving on precarious journeys home.

Mumbai’s garbage has been dumped at the Deonar grounds since colonial times. Waves of the city’s poor were sent to live here by the municipality. Others came to live off it. Since none of the waste here is officially treated or recycled, Lilabai, and others, collect and sell it. Others or work in the small workshops that make shoes, jeans or toys.

Skinny lanes, filled with open drains, now sprawl out from the dumping grounds, some have even encroached into them. Toilets, water pipes and drain covers have come only recently and are hardly enough for lanes, filling quickly with tin and plastic sheet homes and their residents.

Flies, mosquitoes and disease hang close. Lilabai’s neighbour died, just a few months ago, weakened by Tuberculosis. Several others are being treated for it. The disease spreads from being close to people who have it. But Lilabai dresses neatly, stays busy with work, and tries not to think about it.

With coronavirus spreading, people in their lanes, especially those who worked for daily wages in the small workshops have invested much of their savings, to leave. Before trains and buses began, they packed themselves in the usually sealed goods containers.

“They cut small holes to breathe,” says a resident who helped friends get standing space for these day-long journeys in containers. They paid between Rs 3,800 and Rs 4,000. If their containers got too packed, the owners bought small fans to make up for the lack of breathing space.  Staying in the city without work is hard too, others who are trying to leave said.

At first, Lilabai, tried to keep collecting and selling garbage as before. For years, she would clean out mud, sort and sell plastic she collected in nearly 30 different grades, each at prices varying by weight, to the garbage trader in her lane. He would sell in the wholesale market, in nearby Mandala, where it would get sold to manufacturers who would remake it as new. 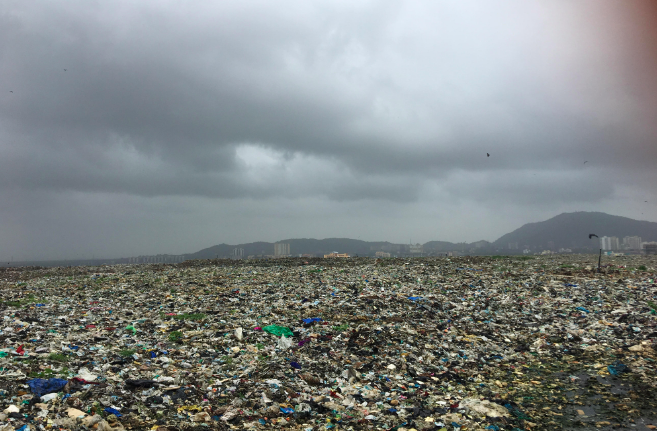 That market stayed closed. Akhtar Hussain Mulla, a garbage trader near the dumping ground says he has a shed full of garbage he has bought but can’t since most large traders closed. Prices have crashed. Before the lockdown, he sold bottles, of the kind Lilabai has collected, for Rs 23 a kilo, now he can barely sell them for Rs 16 a kilo. Thicker plastic, such as buckets sold for Rs 35 a kilo now sells for 20 a kilo.

“Roz sochta hoon kal bechoonga, jab market khulega, tab daam badhega.” (‘Every day I think I will sell tomorrow. Markets may open, prices may go up.’)  It has not happened so far. Akhtar says it is getting harder to get by. Rauf Shaikh a long time resident and garbage traders says “bimari se nahi to bhookh se mar jayenge.”

Police had tried to keep shops closed so people did not get out on the street. It meant food was either unavailable or several times the price it usually was. I began getting calls from residents saying they had not eaten for days. They had slept on tea. Non profits, including my own, began distributing meals and dry rations to long lines, chaos and desperation.

I heard a man who had not made it to the end of one such food line had tried to slit his throat. Others woke up before dawn to be at the front of these food lines only to find others had beaten them. Many spent long, hungry days through Ramzan. They broke fasts with dinner rather iftaar, the customary evening snack, eating just one meal a day. 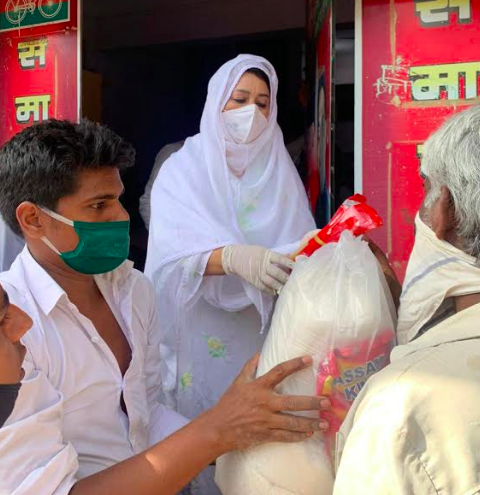 Ruksana Siddiqui, an area corporator said she ran a community kitchen and distributed 7,000 cooked meals through her party and then the municipality, for lunch and dinner.

She believes there are 40,000 documented and several times more undocumented people living in her area. The meals were never enough.

Residents clashed with police and defied curfew when they heard food was being distributed. There was hunger on one side and disease on the other and they were constantly walking on the wrong side of one.

When the national lockdown began, the municipality had expected the area, and its often sick residents, to be vulnerable to COVID-19.

In early April, it began operating its new urban health center that was to open a few months later, as a quarantine facility. Its 100 beds filled up quickly. Patients kept arriving, many needing critical care.

Dr Vikas Oswal, the hospital’s director says he gets calls from 7-8 patients who need critical care every day, except he has no oxygen, ventilators or other facilities for them. “If you are asymptomatic we can help, if you are symptomatic, it is hard,” he says.

Siddiqui, the corporator, says that while this ward has nearly as many coronavirus cases as Dharavi, there are not nearly as many doctors, nurses, beds or medical equipment. “Hamare saath sautela vyavahar kiya jaa raha hai (‘we are getting step motherly treatment’),” she says. Even as she speaks to me, she hears that an area resident, who she had helped to get a hospital bed, has died of the virus.

Oswal spends hours every day calling hospitals across the city requesting beds for such, symptomatic patients, needing critical care. In a few days, the BMC plans to open a 12 bed intensive care unit at his center. But that may not be enough.  Oswal worries, “the situation is getting harder by the day.”

Lilabai has had that feeling for a while. Waiting for meals, waiting for work and waiting to sell the trash she has collected, while worrying about disease, is getting to her. Waste has been moving to the municipality’s modern, garbage treatment facility at Kanjurmarg anyway. She worked on to put her grandchildren through school, she says. “So that they would not have to collect garbage.” This year, her grand daughter has taken the Class 10 board exams but results are delayed because evaluation is hard in the middle of the pandemic.

After two decades of working on the dump, Lilabai is thinking of leaving. Her best chance of riding out the pandemic might be to stay her village, in the neighbouring Ratnagiri district, she feels.

She has been trying to get bus tickets to get there. She has heard the queues for these tickets are long. She is also trying to put together Rs 250 for each of her six family members to get bus tickets. So far, she has had no luck and no money. Maybe, she thinks, she can buy tickets when she can sell her carefully collected trash, rotting slowly in her friend’s shed.

Saumya Roy is the co-founder of Vandana Foundation, which supports livelihoods of micro entrepreneurs and waste pickers in Mumbai. She has been researching the Deonar garbage mountain in the city for several years.