Sarangi's Living Farms gave countless people a glimpse of a new worldview – that of the Kondh communities of Odisha – as well as inspiration to protect it.

I knew Debjeet Sarangi for nearly 18 years, and kept discovering and rediscovering him throughout. At a memorial meeting this week – after his death from COVID-19 on May 15, at the age of just 53 – I learnt new facets I had not known: new surprises tucked away in what he was.

I learnt, for instance, that Debjeet never had many opportunities in his formal education. I’d never really wondered about it. He would read and quote from all kinds of books, and was well-versed in the discourse and practice of many sectors of the development world. And he was constantly learning from Adivasi communities, and other communities too, making him especially ‘educated’, in a civilisational sense.

On the one hand, his formal education seems a trivial question. On the other, it seems important to remember about such a wise and mindful person.

What I can say about Debjeet Sarangi is that he was self-made. He and I first worked together in 2004 against the onslaught of GM crops and foods in India. A fair amount of credit for the Odisha government’s GMO policies should go to Debjeet Sarangi. He left his job to start his own work, which would later become the Living Farms.

Living Farms, in Muniguda in Odisha, turned out to be a pioneering place, giving countless people like me a glimpse of entirely new perspectives, new worldviews, and a new ethos – that of the Adivasi communities of that region of Odisha.

These were nothing less than civilisational insights. I never had the wisdom to fully imbibe and follow them, but Debjeet did attempt to, to the maximum extent possible.

Also read: For Those Dividing Indians in Order To Rule Them, Adivasis Are Clearly Not Farmers

When his work with them began, the Kondh adivasis were attempting to preserve their own identity, dignity and ethos – which meant striking a balance between external influences and innate values and knowledge. It meant bridging a widening gap between generations; and most difficult of all, seeking equilibrium between their own non-monetised worlds and the exploitative, extractive cash economies all around them.

For Debjeet, working along with these communities meant creating an organisation that did not carry a “know-all” attitude. It meant maintaining a fertile mix of “professionals from outside” and members from the Kondh community. It also meant using modern science and knowledge, sometimes, to explore and support local practices and wisdom.

Through its research, Living Farms brought to light the rich wealth of uncultivated forest foods, and a key perspective that forestry approaches have to adopt: of forests as food-producing habitats. They demonstrated how intensified yet sustainable “dongar chassi” (upland farming, which is often shifting) can lead to better diets for Adivasi communities. 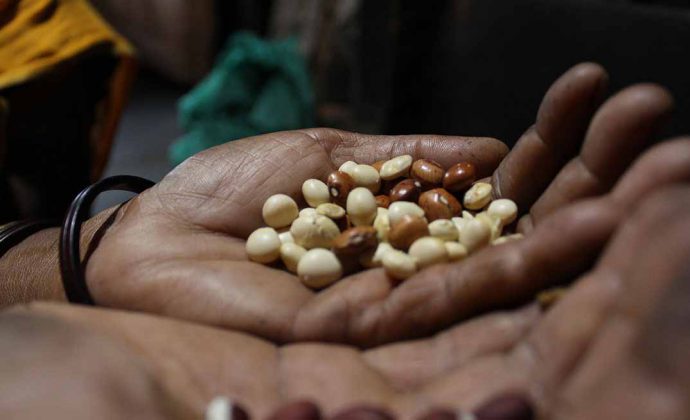 Living Farms showcased forest foods at influential exhibitions in Delhi. It also helped re-popularise them locally, such as with Adivasi children returning from residential schools. “Those concentration camps,” is how he referred to the residential schools and large colleges that ‘mainstream’ Adivasi children by humiliating them and alienating them from their own society.

Debjeet’s dream project, the Green College, would help Adivasi youth re-discover their own communities’ strengths and skills. It would support them in rebuilding their vernacular, preserving their folklore and skills (including architectural and building skills), and finding their own agency and voice.

Eventually, Living Farms’ work encompassed forest rights, food sovereignty, seed sovereignty, and self-determination for indigenous communities. It advocated for a plurality of knowledge systems, for local autonomy, gender equality, and a communitarian ethos – including in community ownership and control over natural resources. In effect, it explored Swaraj, of the deeply egalitarian kutumb and samaj kind practised by the Kondhs.

The work that Living Farms attempted with kitchen gardens, as a key approach to nutrition, was especially impressive. A project supported by APPI saw a sudden scaling up from around 220 villages to 2200 villages, with staff numbers swelling from 35 members to 200 almost overnight. Yet his real feat was to scale back down to 35 staff, and 500 villages, after the proof of concept was squarely established (through a rigorous third-party impact assessment).

I remember Debjeet, his spouse Jyoti, and a staff member personally cooking and feeding millet-based recipes to senior state officials and all other participants, when the state government’s Odisha Millets Mission was being incubated. Living Farms had the special ability to form a working equation with governments. While some of the most talked-about civil society groups in India shun any kind of engagement with governments, and most others choose to become ‘service providers’ in government schemes, Living Farms found a certain equilibrium shunning both extremes. Living Farms successfully influenced the governments of Odisha and Chattisgarh on several occasions.

He also won support and companionship from several of this country’s inspirational public figures, not to mention countless writers, researchers, artists, students, activists and film-makers.

That was the work of Living Farms, led by the vision that Debjeet held, and nurtured along with Jyoti. They were colleagues before they got married – and she was sensitive and supportive, knowledgeable in the worlds that Debjeet straddled.

As for Debjeet himself, the best-fitting description is that he was a “mindful being” always. Humble, gentle and compassionate, with no harsh words, and a certain perplexed concern when he encountered negative behaviour. In Muniguda where he spent most of his time, if you came down from the guest room early in the mornings, you would find Debjeet softly playing Hindustani music, already at work at 5.30 am.

He was among those rare NGO founders who opted for a lower salary than his ‘second line’ functionaries, whenever required. He handed over Board powers trustingly to a whole set of non-founders, in order to hold an executive role himself.

Many people will want to come together to fulfill his unfinished dreams, to carry forward his vision. It will be greatly more challenging now, in his absence. But attempt it we must – with gratitude for his teaching us about newer worlds, and for the mindful and meaningful life he lived.

Kavitha Kuruganti is the founder and convenor of the Alliance for Sustainable and Holistic Agriculture (ASHA), and was a member of the board of trustees of Living Farms.