23-year-old Suvam with his mother, Smriti. Photo: By arrangement.

New Delhi: Over the last decade, a number of court orders and changes to regulations have allowed Indian citizens to use their mother’s names to fill the ‘guardian’ column on official documents.

Earlier, the father’s name was mandatory under the ‘guardian’ section for almost all government records, including for a Permanent Account Number or PAN card, an Aadhaar card and a passport.

Despite these changes, children of single parents, particularly those who were brought up by their mothers, find it an uphill task to enter just their mothers’ names under the relevant field.

For 23-year-old Suvam, it took about a decade of running to and from government offices before he could finally celebrate victory in February 2022 with his mother, Smriti Sinha, over a video call.

Changing Suvam’s ‘guardian’s name’ to that of his mother’s was easier with his Aadhaar card than the PAN card.

“When I told the relevant person that I did not want my father’s name, he raised his eyebrows. After several rejections and five years, they changed the name in my PAN card,” he said.

The Income Tax department changed its rules in 2018 to allow taxpayers with single parents to provide their mother’s name on their PAN cards. However, the online application portal did not accept the same till January 2022.

The first time Suvam experienced this difficulty was just after he finished his studies in Kolkata. For his School Leaving Certificate (SLC), Suvam requested his school principal to allow him to not use his father’s name.

“I was around 15 or 16 years old. I thought that it was very unfair that I had to put the name of someone who has never been a part of my life. It was insulting to say that my mother’s name was not enough, because she was the only parent I knew,” he told The Wire.

After his request was declined by the principal, Suvam went on internet and realised that writing to higher-ups in the government could be his only shot at resolving the issue.

On the way back from school, Suvam wrote an email to the then Union Minister of Women and Child Development, Maneka Gandhi, and Minister of External Affairs, the late Sushma Swaraj.

“Shortly afterwards, my mother received a call from their offices and was promised that they would support us, by making a legislative change to allow for my mother’s name to be printed on my documents,” he said.

Suvam’s mother Smriti tells The Wire that the teenager “was young but resolute” and was firm that he would not continue studies if this change was not made.

“He asked his principal to change the format of the certificate. That gave me courage. Earlier I would tell people that I was a widow, but this made me come out with my truth without any shame – that I was a single mother,” said Smriti.

When Suvam applied for a passport to go abroad for higher studies, he received one bearing his father’s name. He was told by his mother that an officer had told her to “hire” someone to stand in as his father to make things easier.

“It was weird. But, a lot of people without fathers have to do it,” Smriti said.

Suvam said most people either did not attempt to understand why he did not want his father’s name on paperwork or disregarded his request.

“I was raised by a single mother and I am not ashamed of it. I do not want to be associated with someone who has never been present,” he said.

Suvam now studies and works as a linguist in Adelaide, Australia. For Smriti, it is a matter of pride that her son stood up for her. 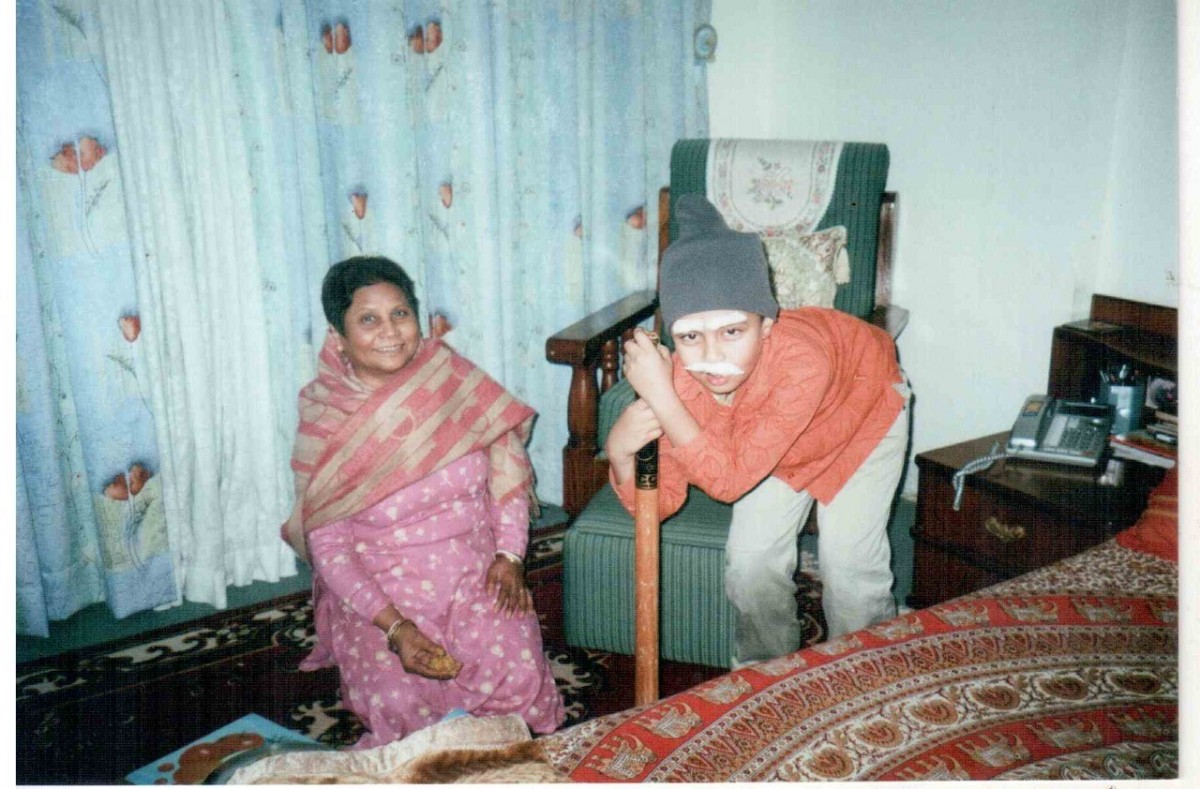 Suvam with his mother, Smriti Sinha. Photo: By arrangement.

Smriti recounted the violence faced by her during her marriage of five years.

“Suvam’s father never once asked how he was doing. Taking care of him and providing for him was solely my responsibility,” she said.

In India, 30% of women experience domestic violence at least once in their lifetime from the time they turn 15. Around 4% of pregnant women have experienced spousal violence during their pregnancy.

“I chose to ask for a divorce because I did not want my son to grow up to be violent, or disrespectful towards women. I was afraid about what people would say, about how I would raise him alone. For a long time, I hid the truth from my family too,” she said.

With her parents’ help, Smriti was able to finish college and get a job.

But life as a single mother was never easy. “I was absorbed in my work, because I was young, had no experience, and a baby to feed,” she said.

Also read: Breaking the Stigma, Non-Custodial Mothers in India Are on the Road To Redefining Parenting

She now works as the country manager of a pharmaceutical company in Kathmandu, Nepal.

Passport for daughter with mother’s name

Among those who are responsible for significant changes in India’s archaic passport rules is Priyanka Gupta, who works at the Iceland Embassy in India.

A single mother to a daughter, she started a Change.org petition titled “Passport for my daughter with Mother’s name” in 2016.

In her petition, she wrote, “I am a single parent. My husband abandoned my daughter and me when she was born just because she was a girl. He never looked back and doesn’t even care whether we’re dead or alive.” Priyanka Gupta with her daughter Garima. Photo: By arrangement.

Priyanka started the petition when her daughter, Garima, was denied a passport because she did not want her father’s name on it.

Garima’s voter ID, Aadhaar card and bank account had her mother’s name, but the passport office denied their requests despite repeated attempts to convince a passport officer, letters and meetings with senior officials.

“For Garima, she would be reminded of her father every time she looked at her passport. He was someone who had hurt and abandoned her,” Gupta told The Wire.

Garima, however, was clear that she did not want the name of a person who she had never seen on any of her documents.

In 2015, Garima’s passport application was rejected. An opportunity to study in Russia would have slipped through her fingers if she did not agree to the rules.

When Garima found an opportunity to go abroad for another study trip in college, Priyanka convinced her to make peace with the fact that the passport would contain her father’s name – for the second time.

But she was furious, her mother said. “She told me that she will fight a legal case to remove her father’s name when she starts earning. I couldn’t have afforded the legal fees at the time. That is when I came up with the idea to start a petition,” she said.

At first, Priyanka too was afraid of the process and the stigma it would invite, just like Suvam’s mother Smriti.

“I was afraid that the attention would make me feel uncomfortable. Change.org contacted me, told me to run the campaign and see the response. Once I posted it, I realised that I was not alone. My cause resonated with many others,” she said.

In her petition, Priyanka wrote that single fathers too, like single mothers, faced several hardships. “Often there is a traumatic story behind the reason we are single. We have to work extra-hard to support our children and be there for them,” she wrote.

The petition was acknowledged by Gandhi, who forwarded it to Sushma Swaraj. A committee was formed to look into the matter.

Soon, based on the committee’s recommendations, new rules were made to obtain passports, making it easier for children of single parents to apply for passports.

The rules were also simplified for children who were either adopted, orphaned or born out of wedlock.

Priyanka managed the house when her husband abandoned her and her daughter. She has now finished an MA and works in Australia.

“Garima is now 27, living a good life in a great country. I tried my best to not let her feel the lack of her father, and I think I managed well,” she said.