'This is BJP’s Patent Style': Why Lakshadweep is Being Compared with Kashmir

On the face of it, the two Union territories face different issues. But beneath the surface they may have more in common than the people of the two regions realise.

LJD activists burn an effigy of Lakshadweep administrator Praful Patel to protest against policy changes announced by him outside Lakshadweep Administration office in Kochi, Tuesday, May 25, 2021. Photo: PTI.

New Delhi: In the six months since the appointment of Praful Khoda Patel as the administrator of the Lakshadweep islands, the idyllic archipelago has been introduced to draft bills and orders that the locals label as “draconian” and “arbitrary”.

These orders and draft bills are just the beginning of what Patel calls ‘developmental design’ – his plan to make over the islands and their people so that Lakshadweep becomes a luxury tourism destination.

However, some of the draft bills and orders show a distinct lack of understanding of Lakshadweep’s social, cultural and topographical landscape. Others that target dissent seem similar to draconian laws that have long been in place in Jammu & Kashmir, besides the new measures taken by the police and administration to curb criticism after Article 370 was read down in 2019. Altogether, according to several politicians and civil servants as well as many ordinary Lakshadweep residents, what is happening in Lakshadweep at this time appears to resemble what has been happening in J&K at least since 2019.

The Communist Party of India (Marxist) has condemned Praful Patel’s policies in Lakshadweep, stating that they reveal “shades of the Kashmir experience” but that the “real model” being pursued is the “Gujarat one”. On May 31, the Kerala assembly unanimously adopted a resolution seeking the removal of Praful Patel from all his responsibilities as Lakshadweep’s administrator and Kerala’s chief minister, Pinarayi Vijayan, said that the Sangh Parivar was looking at Lakshadweep as a laboratory for their Hindutva politics.

Meanwhile, Mohammed Faizal, Lakshadweep’s only member of Parliament (MP), has been trying to understand what Praful Patel has been aiming to do.

Patel’s plans dig deeper into the system than the words ‘developmental design’ imply, said Faizal, pointing out that just as the administrator had done in Daman & Diu and Dadra & Nagar Haveli, he retrenched 200 contractual employees of the central government’s sponsored schemes in Lakshadweep during the pandemic and without the knowledge of the Centre.

“The administrator has only spent 15-20 days in the islands during his six-month tenure. How can he pass such draconian orders without understanding the basic lifestyle of the locals?” asked Faizal.

“So, these regulations are being drafted to legally take away the locals’ land and hand it over to big corporates on long leases,” alleged Faizal.

Lakshadweep, Faizal told The Wire, contributes 4.02 lakh sq km to India’s exclusive economic zone (the area of the sea over which a nation has special rights to exploit and use marine resources). Yet, he pointed out, Patel is not interested in developing this zone. Rather he plans to occupy more land for development than the islands can ecologically bear. Patel, said Faizal, wants 20-metre roads where three-meter roads are sufficient.

The only thing that stops Faizal from comparing the LDAR with the amendment in the Jammu and Kashmir Development Act which allows the armed forces to notify ‘strategic areas’ for themselves is the fact that the LDAR is still a draft bill.

“Yet, even as a draft, the LDAR draws so much dissent,” he told The Wire. “If it becomes the law, I will be forced to make comparisons between Jammu & Kashmir and Lakshadweep.”

The introduction in January 2021 of PASA (Prevention of Anti-Social Activities Regulation), colloquially known as the Goonda Act, under which the administrator can jail individuals for up to one year without trial, was clearly a measure to intimidate the people of Lakshadweep, said Faizal.

Faseela Ibrahim, a lawyer from Minicoy Island, agreed with Faizal’s belief that PASA was introduced in Lakshadweep to frighten its populace.

“PASA is symbolic of the scuttling of dissent throughout the country,” said Ibrahim. “According to National Crime Records Bureau data, Lakshadweep has the lowest crime rate in India. Bringing in PASA, which allows preventive detention without trial, is unnecessary and unjustified.”

Ibrahim makes it a point to list the chronology of the introduction of the various new regulations in Lakshadweep.

“Once the administrator arrived, the pandemic standard operating procedures were removed and PASA was immediately brought in,” said Ibrahim. “After that the Panchayat Regulations and the Lakshadweep Development Authority Regulation, 2021, were brought in. PASA takes care of the dissenting populace. The administration has understood that the people of Lakshadweep know their rights and they will not keep quiet.”

The Panchayat Regulations and another draft bill propose to prevent people with more than two children from contesting elections. Given that Lakshadweep has no legislative assembly, the panchayats are the islands’ only democratically elected bodies, Ibrahim pointed out. Any curtailment of their powers is an attack on the Union territory’s limited democracy. But the Panchayat Regulations propose to remove the administrative, political and financial powers of the local bodies. Another order in May talked about removing the panchayats’ powers in matters of agriculture, animal husbandry, education and health services.

Faisal and Ibrahim have differing views on the Animal Preservation Regulation, 2021, colloquially known as the beef ban, that was introduced in late February and the lifting of the ban on alcohol. While Faizal believes that these dietary laws have been implemented to distract the media from the LDAR, which is Patel’s real agenda, Ibrahim asks why Lakshadweep has not been shown the same cultural sensitivity that was granted to Goa and the states of the North East.

“All these regulations will affect our whole way of life. Our culture, livelihoods, land, liberty – nothing will remain the same,” Ibrahim told The Wire.

The banning of beef also brings to Lakshadweep’s shores a whole set of problems that had never existed in the islands before, according to Ibrahim. One provision of the law allows the inspection of any place suspected to hold beef. Another mandates jail from anywhere between 10 years to life for the slaughter, storage or consumption of beef and a third makes it clear that the Act cannot be challenged in any court of law.

“They have brought in this beef ban to bring the Muslim issue to the forefront and make this about religion,” Ibrahim alleged.

The people of the island are also being ignored, said Ibrahim, pointing out that the LDAR uses words like ‘railways’, ‘tramways’ and ‘national highways’ in a place which comprises a cumulative 32 square kilometers.

“Furthermore, an authority appointed by the administrator will decide which areas in the islands will be used for development and what kind of developments will take place in those areas, but the LDAR is completely silent on the rights of the people,” she said. “In fact, the regulations will take away the rights to ownership of the indigenous people of the islands and there is no mention of rehabilitation.”

In Jammu & Kashmir, senior advocate Ghulam Nabi Shaheen believes that the controversy surrounding Lakshadweep is deeply political. On the surface, he told The Wire, Lakshadweep’s demography doesn’t matter. But when laws such as the land regulations and the beef ban are introduced that are bound to affect the majority, it shows that the administrator’s objectives are not ‘developmental’ and are meant to cover up the failures of the ruling party in one guise or the other. 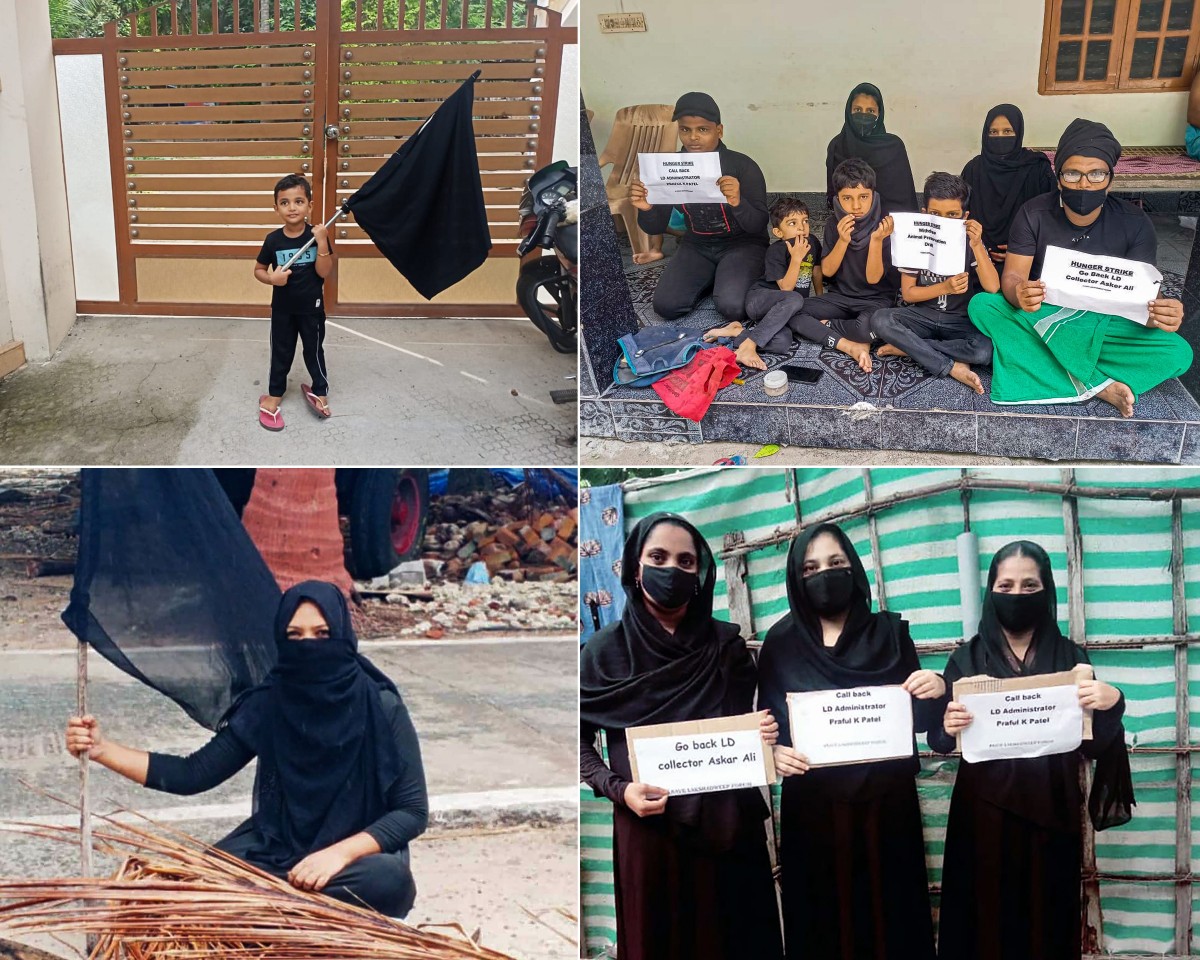 “Changing land regulations in Kashmir and now Lakshadweep, is the BJP’s patent style. But it is highly unlikely that the BJP will be able to remove the indigenous populations of either Union territory,” he said. “This is just a political agenda designed to stir up Hindu-Muslim feelings.”

From peace to volatility

Whether the orders and draft bills introduced in Lakshadweep in the last six months are actually communal in nature or not, the huge trust deficit among the country’s minorities vis-à-vis the present government means that every government initiative is looked upon with doubt, said Kashmir-based senior law academic and political analyst Sheikh Showkat.

“There is this feeling that the laws are anti-Muslim, but what they [the Central government] actually intend to do, no one knows,” he explained. “Based on the passage of the Citizenship (Amendment) Act, 2019, which specifically said that Muslim refugees in India cannot be given citizenship, the community feels that the Centre is trying to disempower Muslims.”

The change in Lakshadweep’s land regulations if passed will mean that the islands will be opened to corporates and the indigenous communities will feel targeted, said Showkat. “So a peaceful region may even become volatile if the local people develop a sense of insecurity,” he said.