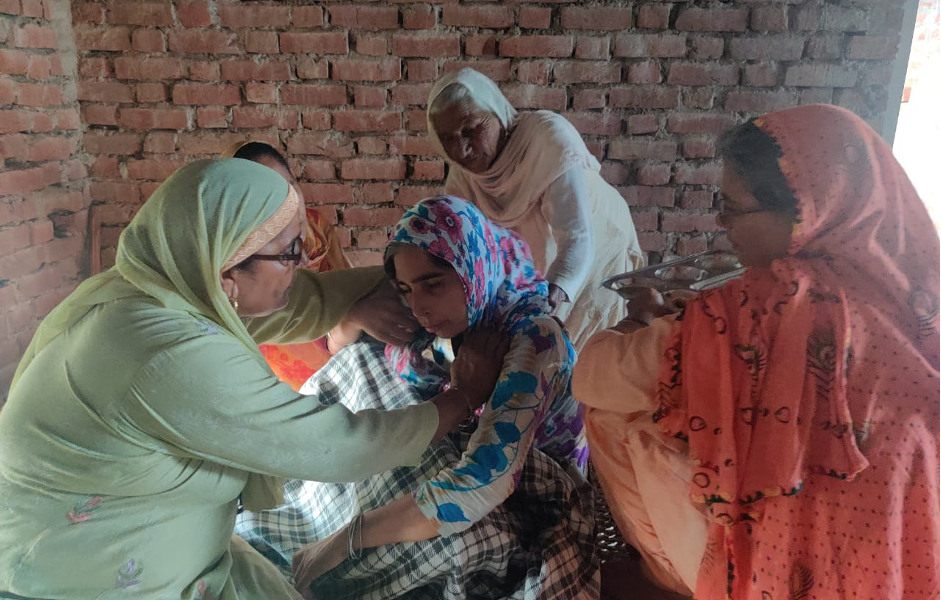 Lovepreet Singh's mother has been unable to eat since her son's death. Photo: Ismat Ara/The Wire

Palia, Lakhimpur Kheri: Satvinder Kaur (45), mother of the youngest victim of the violent episode in Uttar Pradesh’s Lakhimpur Kheri, has refused to eat food since her only son, 19-year-old Lovepreet Singh, died on Sunday.

His sister, Gagandeep Kaur, only a year younger than her deceased brother, tries to comfort her. “Mother, the one who has gone is gone,” she tells her. Amandeep Kaur, Lovepreet’s other sister, brings the plate of chapati and dal closer to Satvinder’s mouth. She refuses again, even though she has been taken to the local hospital at least thrice due to severe weakness since the incident.

The grief is palpable around Lovepreet’s house in Palia’s Chaukhra farm area, as farmers from the neighbourhood come to show solidarity and share in the family’s pain. Chaukhra is dominated by Sikh farmers and is lined with sugarcane farms, and a few farms growing banana and rice. On Sunday, the day when the violence erupted, Lovepreet had left home to join the farmers in Tikunia to protest the visit of local MP and Union minister of state for home Ajay Mishra (known to his supporters as “Teni”) and UP deputy chief minister Keshav Prasad Maurya. The teenager was among the four protestors mowed down by a car allegedly car Union minister Ajay Mishra’s son Ashish Mishra. The two BJP leaders, however, have denied that Ashish was at the scene.

He had travelled roughly 50 km on his bike that day, his uncle Kewal Singh told The Wire. Before speaking, he asked if this correspondent is from “godi media”, referring to mainstream Indian TV news channels which he believes will “twist and turn” their statements. 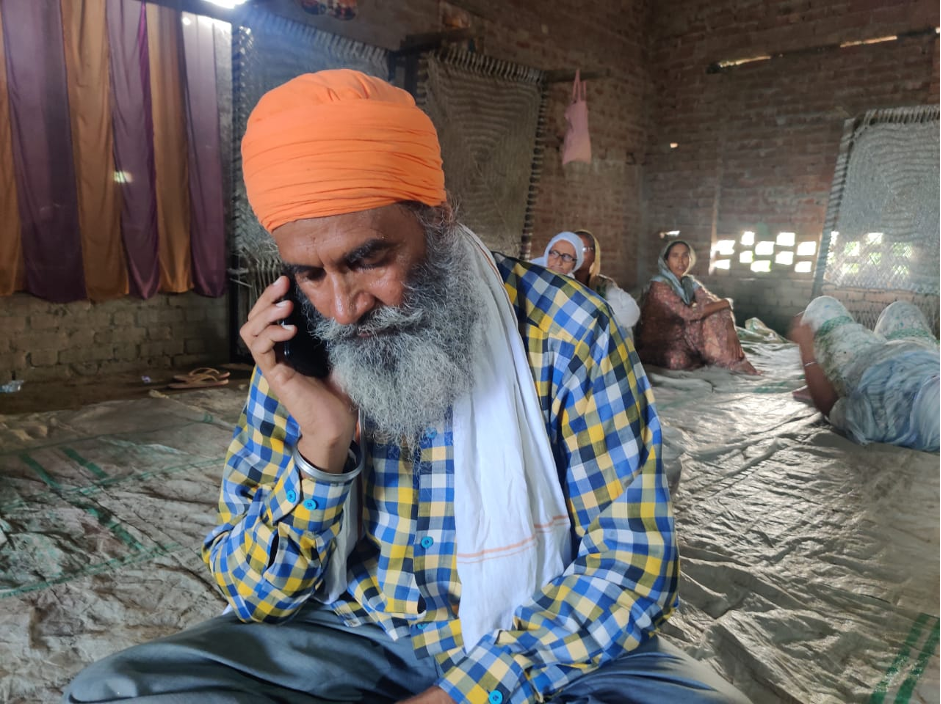 Lovepreet’s last rites were performed on Tuesday, hours after his family refused to cremate him, as they worried that the administration may tamper with the post-mortem report. The family agreed to the cremation only after Bharatiya Kisan Union’s Rakesh Tikait met the families of Lovepreet and Nacchatar Singh, both victims of the violence.

Lovepreet’s cremation was conducted late in the evening, in the presence of senior police officials who had assured the family of a fair investigation in the case. They were also handed them a compensation cheque of Rs 45 lakh, as promised by the UP government.

Even though the family agreed, they say that they have not been handed over the FIR registered in the case so far. The post-mortem was done in the presence of the family, Lovepreet’s father told The Wire.

“When a person sees a dog on the street, even then they stop to try and save it. Was my son worse than even a dog?” 42-year-old Satnam Singh, Lovepreet’s father, asked. Demanding that Kheri MP Ajay Mishra be removed from his position in the home ministry immediately, Lovepreet’s father said that only a death penalty for Ashish Mishra may come close to justice for the family.

“He is a gunda. He is a threat to other humans and we are demanding the death penalty for him,” he said, while speaking to The Wire.

Lovepreet was preparing for the IELTS exam, as he wanted to travel to Australia and find work there, his father told The Wire. “My son was not too ambitious. He just wanted to earn well, take us out of debt and improve the condition of our house, like every responsible son.”

Eyewitnesses that Satnam met with told him that it was a “pre-planned conspiracy” as the car had hit the victims from behind.

After getting injured, Lovepreet was first taken to the Nighasan local hospital, which referred him to Lakhimpur district hospital for treatment. “He died on the way…” he said, adding that he couldn’t even meet his son for the last time while he was leaving home as he was outside.

“If I could, I would go back in time and tell him not to go there, but now whatever had to happen, has happened. We will still protest, no matter how much we are suppressed,” he said. Lovepreet’s father owns roughly 2.5 acres of land and is engaged in sugarcane farming. Due to increased input costs such as fuel prices and non-payment of dues by sugar mills, he has incurred a debt of almost Rs 2 lakh through the KCC (Kisan Credit Card). This is the case with most small-scale farmers like him in Uttar Pradesh, he said.

This is one of the houses visited by Congress leaders Rahul Gandhi and Priyanka Gandhi Vadra and Aam Aadmi Party’s Sanjay Singh on Wednesday, after several days of trying to meet victims’ families to express solidarity and extend support.

After meeting the families of the two farmers and one reporter who had lost their lives in the violence on Sunday, Priyanka said, “If I can be arrested [in Sitapur] without a warrant, why is Ashish Mishra not being arrested?”

“All three families we met today are not satisfied with just monetary compensation. They want justice, which means the resignation of minister Ajay Mishra and the arrest of his son Ashish. If police can arrest me without a warrant what is stopping them from arresting Ashish Mishra,” she said.

Rahul, after meeting this family, wrote in a tweet, “Shared grief with the family of Lovepreet. But until justice is not done, this satyagraha will continue. Won’t forget your sacrifice, Lovepreet.” 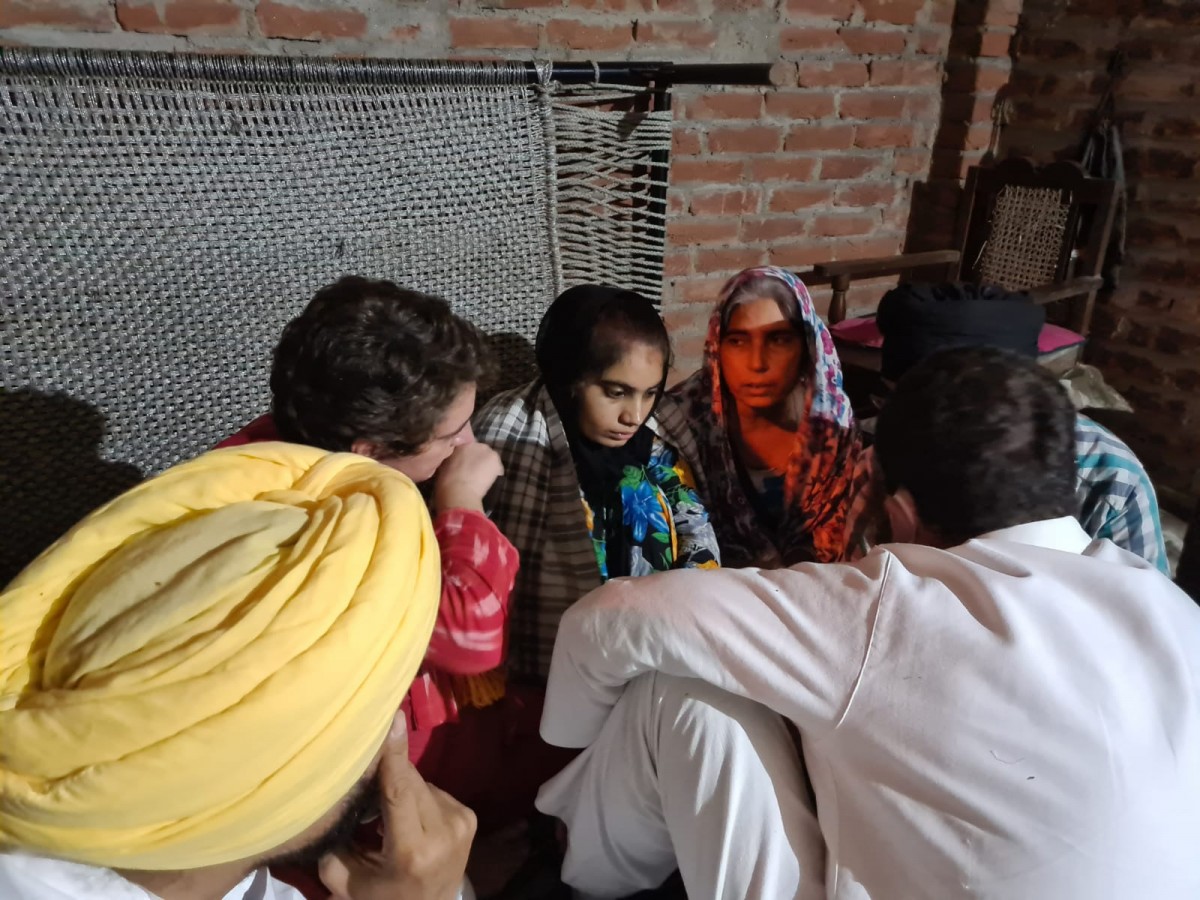 Lovepreet’s father, while speaking to The Wire, said that support from the farmers’ organisations as well as opposition leaders have strengthened them to fight this “difficult and lonely battle” for justice.