"This CAA and NRC have made us very insecure. Muslim women have gathered to tell the prime minister that we matter.” 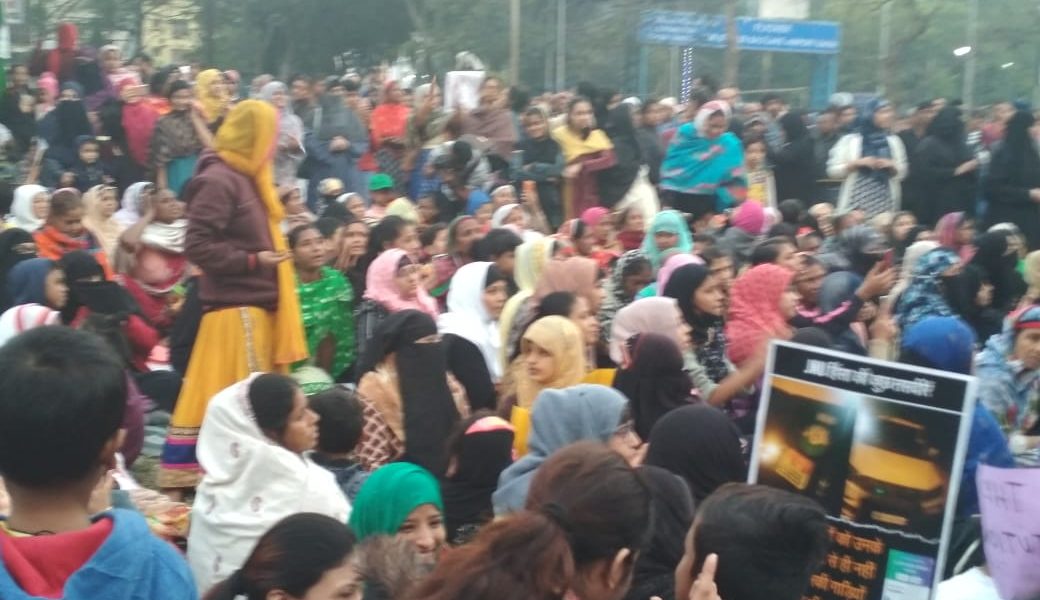 One week ago, on January 7, some women from Central Kolkata were inspired by the Shaheen Bagh gathering, and arrived at Park Circus to voice their sorrow and anger about the state of their country. They were disturbed by the passing of the Citizenship (Amendment) Act and the developments around the National Register of Citizens and National Population Register, state violence in Uttar Pradesh, and attacks by police on students across different university campuses.

Very soon, the police arrived and the women were told that they didn’t have permission to assemble there. The women then began a discussion with the police, asking whether they had a right to voice their dissent. At the same time, some of them informed friends and family that the police had arrived. Gradually, more women gathered at the protest site. Advised by senior officers, the local police requested the women to write an application asking permission to have their gathering.

The women have now been at Park Circus for more than a week. Many people refer to Asmat Jamil as the moving force behind the protest. Jamil lives on Ripon Street and she says that she initiated this protest with members of her organisation, Azzumar, and some of her family. “Imagine!” she said. “The Prime Minister of the country says beti bachao, beti padhao, yet when girls go to study, his henchmen go to the university and attack them.” She asserted that it is important that all of us in India, irrespective of community, now demand our rights as citizens.

A large number of women at the sit-in are hijab-wearing, Urdu-speaking Muslims from different parts of the city like Park Circus, Topsia, Ripon Street, Metiaburuz and Colootola. There are stay-at-home grandmothers, entrepreneurs, homemakers, daily-wage labourers, teachers, nurses and other professionals. School-going girls come to the sit-in with their mothers and aunts.

A plastic rope cordons off a large area around the gazebo in the Maidan. Women sit on the ground in this cordon, and within the gazebo and on its steps. The rope is to keep the men out of the main protest area. However, men are there in large numbers – most of them outside the cordon. The gazebo is festooned with the Indian tricolour. The sight of hundreds of women sitting before the national flag and raising slogans for freedom imbues the tricolour with a meaning that many thought was lost in the last few years of state-enforced hyper nationalism. At another place in the field, there is a picture of Babasaheb Ambedkar, with national flags on either side.

I asked several women whether they thought this gathering was a women’s protest. Women of different ages and backgrounds confidently said that it was women who started this protest and were keeping it going. “However, this protest is not about women or men, or Muslims and Hindus. This is about all Indians,” many protestors tell me.

One evening at the protest, a veiled woman  greeted me as she sat down. I learnt she was a doctor and had come there with her husband, another doctor. “I can’t miss work,” she said. “But my husband and I came here to see how we can support this effort.”

This feeling of community is evident in the ecosystem that has grown around the protest ground. Many women are attending the protest with other women from their families, and husbands and brothers too. The foam mats, plastic sheets, blankets and durries for people to sit on have been donated by supporters. At various times, bottles of water, tea, coffee, biscuits and fruit are distributed by volunteers. Around half past ten, on a chilly Kolkata night, Tabassum came with her husband and handed out bowls of warm haleem.

It is important to remember that the crowd at the protest keeps changing. Some stay for two or three days at a time, some come to spend a few hours, some drop in occasionally. “I came here because my cousin told me women were gathering here,” said a woman accompanied by her two children, aged two and five. “It is important to come. This CAA and NRC have made us very insecure. Muslim women have gathered to tell the prime minister that we matter.”

We should not lose sight of the fact that people spending the night at the protest site are sleeping in the open on mattresses or durries. The protestors have asked permission to erect an awning but that has not yet been granted. There has also been a Facebook campaign asking the mayor of the city to allow the protestors to put up tents. Many people are wondering why the government of West Bengal is not extending this basic courtesy to the protestors. There are also no provisions for toilets.

When headscarf-wearing teenaged girls from the slums of Topsia take the mike and say ‘Hum kya chahte’ and a crowd of 500 odd responds ‘Azadi’ – you cannot help but feel hopeful. At the same time, it would be wrong to forget the anger and despair that has brought all these people together – many who had never before thought of themselves as active political agents. Inspired by their initiative and persistence, many people have made their way to Park Circus to show solidarity. Students from different universities and colleges are there shouting slogans, making friends and singing. “This is an important movement for the country,” said some students of Aliah University. “Therefore, we make it a point to come here everyday although our campus is far away.”

Aysha Renna of Jamia Milia Islamia visited Park Circus on January 9 and addressed the gathering, and stayed chatting with many of the protestors. Kabir Suman, a musician and a former Trinamool Congress MP, came to the protest site on January 13 and sang. Musicians Moushumi Bhowmik and Satyaki were also there with a group of singers. They sang of protest and patriotism, including the second verse of Jana Gana Mana that emphasises broadness of mind and diversity.

A stirring speech on Monday evening by Umar Khalid summarises the hopes of the protestors. He said that large numbers of Muslim women gathering for sustained protest in Shaheen Bagh and Park Circus were turning preconceived notions about Muslim women on their heads. Muslim women were leading a fight for Muslims to be counted as citizens. Referring to the Sachar Committee report, he said that the gatherings at Shaheen Bagh and Park Circus were a fight for equality – of opportunity, education and employment.

Firdaus Saba, a student of Physics at Aliah University, is one of the many young women who leads the slogans at the protest. As the cry of azadi resounds through the grounds, the women not only demand freedom from CAA and NRC but also the freedom to move freely, the freedom to study, freedom of employment and the freedom to choose whom to marry. Some of the protestors wonder if CAA and NRC will be rolled back, if these protests, powerful as they are, will change anything. Within themselves, however, they know that they are doing something important and the past few days have changed them in ways that they can’t yet fathom.

Anchita Ghatak is the Founder of Parichiti: Making Women Visible, a collective working for rights of women domestic workers and other marginalised women.