Several videos uploaded on social media show police personnel tearing down the tents at the site. 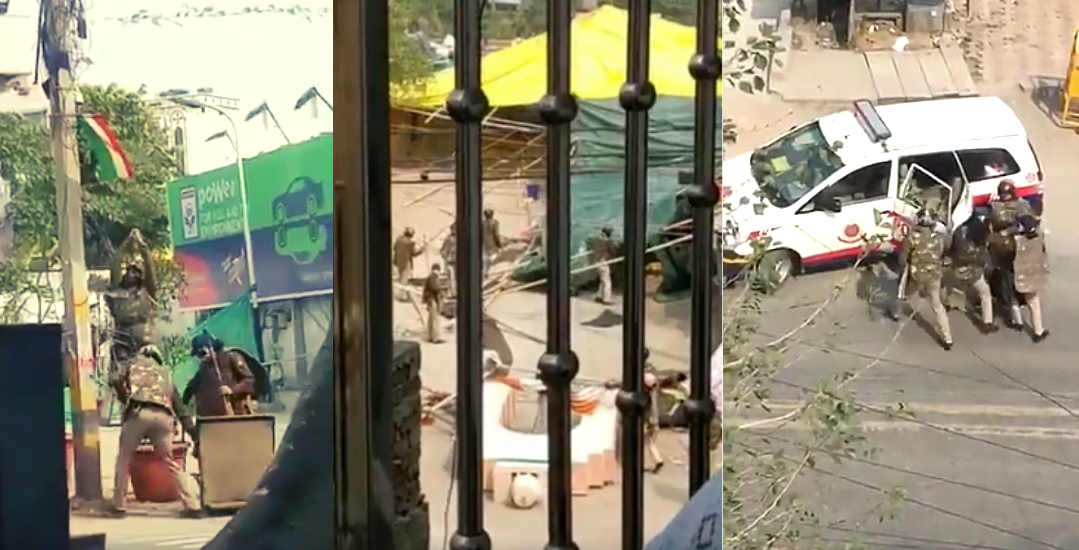 Video screengrabs of police action at Khureji Khas on February 26.

New Delhi: Amidst news that the anti-Citizenship Amendment Act protests at Khureji Khas in north east Delhi have been ‘cleared’ by Delhi Police, scattered protesters at the site have been putting up social media posts of alleged manhandling, lathicharge and an unwarranted detentions by police.

Lawyers from Indian Civil Liberties Union collective said they had not been allowed to enter the Jagatpuri police station, where the detainees were taken.

“An official began filming us, and another snatched away a phone from a female colleague who was filming the goings on,” said one of the lawyers on the scene, requesting anonymity.

Received calls from @TamannaPankaj and @TheAdvIqbal
Delhi Police is attacking and beating them and other lawyers at Jagatpuri Police Station who went for d release of the detainees of Khureji. They are slapping and lathi charging women lawyers and their phones are being snatched.

The lawyer also alleged that rightwing activists in saffron were present outside the police station. “Two of them asked police if we were the ‘lawyers from the Supreme Court’ and police replied in the affirmative. They then followed a colleague of ours for a distance,” said the lawyer.

The lawyers eventually left the police station to decide on their course of action with regards to the detained. The copy will be updated on

Among those to allege that police have been barring lawyers was advocate Arif Iqbal, who had reached the police station to help release the detainees.

“I was with the rest of the team when they started manhandling lawyers. They had started using batons as well. They were hitting my colleague Anas, and I was trying to film it, when a male cop slapped me. I screamed at him, asked him how dare he hit a woman,” Mekhala Saran, a law student and member of ICLU told The Wire.

ICLU eventually released a statement on the day, in which it accused Delhi Police of not only manhandling lawyers but also taking away one of their phones.

A tweeted video shows police using force while shoving a woman protester into a police vehicle.

Clear evidence of male police officers manhandling women protestors at Khureji. Detainees have been taken to Jagatpuri Police Station. Lawyers are not being allowed to meet detainees. We urge more lawyers to reach the PS.#delhivoilence #DelhiRiots2020 pic.twitter.com/mUfGapb7ts

It is not clear is the woman in the above video is Ishrat Jahan, a prominent volunteer at the Khureji protests. It is also not clear as to why she may have been detained.

Police have also removed the bamboo framework, gateway and awnings at the protest site as the videos below show.

In the video below, police can be seen breaking CCTV cameras, allegedly at the site.

Protests at Khureji have been taking place off the road, since January 13. Like the Shaheen Bagh anti-CAA protests, these too have been people mostly by local women.

Police have, in the past, made attempts to remove the agitators from the site of the peaceful dharna. On January 16, The Wire’s Santoshi Markam reported from the site where women alleged that police had attempted to uproot the large tent and threatened them to vacate the region.

Late on Tuesday, police also removed protesters sitting in at Jaffrabad, against the CAA.

In violence that has erupted since February 23, in which members of particular communities have been targeted, at least 21 people are understood to have died and several hundred are injured.