A mob numbering greater than 60 attacked Abdul Hamid and his family. His brother-in-law is now facing a social boycott.

Khargone (Madhya Pradesh): The fallout of communal violence that was reported during Ram Navami has encircled families living several kilometres away from the city of Khargone, with properties and houses of Muslims targeted by locals who accused them of “sheltering rioters”.

In Kukdol village, Abdul Hamid and his family were in terror on the night of April 12, when a mob numbering greater than 60 – led by a 20-year-old Balram Chouhan aka Balram Rajpoot – stormed their ancestral home.

Two days before the attack on Hamid, a communal clash broke out in Khargone city on Ram Navami (April 10) around 5 pm at the communally sensitive Talab Chowk. A Hindu procession was allegedly pelted with stones. Within half an hour of this incident, the old city of Khargone was gripped by violence, forcing the district administration to clamp curfew.

Hamid, once a resident of Khargone, moved to Kukdol with his family after losing his sight 10 years ago. His family is among just four who belong to the Muslim community, living in the Hindu-majority Kukdol village, which lies merely eight kilometres away from Khargone city. Kukdol has over 3,500 Hindu voters, a majority of them belong to Rajput and Yadav castes.

“It was around 9 pm when stones were pelted. Within 10 minutes, they barged inside the home after breaking two doors. They accused us of sheltering rioters. They threatened to rape my deaf and mute daughter, tore the clothes of my wife and attacked us with stones. They forced us to chant Jai Shree Ram,” said Hamid who broke down while recounting the incident.

“There are five people in my family and my uncle Mohammad Reyaz lives meters away from my home with his family. They came to my home for dinner when the stone-pelting began around 9 pm,” said Abdul Malik, Hamid’s eldest son.

As some members of the mob assaulted the family inside the house, Balram was trying to make an LPG cylinder explode, the victim’s family. Abdul Malik, who is 23, then made a desperate call to the police. Luckily, the cops who were on patrol close to the village replied, “Hang in there for five more minutes,” remembered Malik. Within two minutes, the police’s siren blared and the mob ran away.

Hamid, his son and his brother-in-law received serious injuries. “We have been living in this village for over a century, but this is the first case of assault,” Hamid said.

Around the same time Hamid’s family was under attack in Kukdol, a shrine was vandalised in Birauti village, about 20 km away. Birauti falls under the Mengaon police station of Khargone.

On April 11, a garage belonging to Mubarik Khan, located five kilometres away from Khargone city on the Khargone-Khandwa road was set on fire by unidentified miscreants around 9 pm. As many as three buses and one car were gutted in the incident, claimed the victim.

On April 12, the sparks of violence travelled over 62 km away from Khargone to Dhargaon village, which falls under the Mandaleshwar police station. The house of Shahrukh Shaikh (45) was attacked by over 50 men around 9 pm, accusing the family of “sheltering rioters”.

On the intervening night of April 15-16, a decade-old plastic factory belonging to Arif Sufi was set on fire by unidentified men in the Bhadli Industrial area,  three km away from Khargone city. The property, worth Rs 45 lakh, was turned to ashes. The police, however, claimed that a short-circuit caused the fire which Sufi has contested in his application to the police.

Back in Kukdol, on April 13, a day after the attack, the Khargone police registered an FIR against 15 people under six sections of the Indian Penal Code (IPC) – including rioting. The victim’s family alleged that to water down the case, the police imposed weaker sections in the FIR and the reason for the attack – their Muslim identity – is completely missing from the FIR.

The police arrested six people out of the 15 mentioned in the FIR on April 13. The arrested people have been identified as Mahadev, Akash, Yashwant, Rakesh, Anil, and Abhay. The main accused, Balram, was listed as “absconding.”

After the incident, Abdul Hamid’s family is afraid of returning to Kukdol as they fear another attack. They are staying with relatives in Khargone. Mohammad Reyaz, Hamid’s brother-in-law, who spent three days in a hospital to recover from a severe head injury had no option but to return to the village as his five kids and wife were in Kukdol and he feared for their safety. 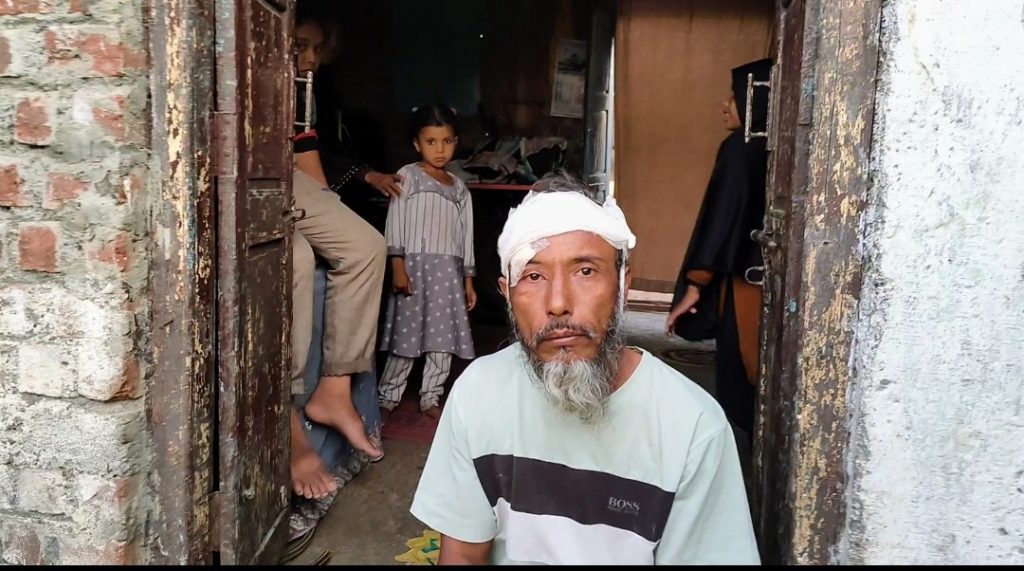 “We don’t want to return to the village. I have a pregnant daughter-in-law, a daughter and a wife. I myself am blind and can’t protect my family. My sons are away most of the time to make a living,” lamented Hamid when The Wire met him and his family on April 16.

“We survived this time, but who knows what will happen in the future,” he added.

Speaking to The Wire, Hamid’s wife Zubaida Bi (45) demanded stern action against the attackers and stone pelters. She appealed to chief minister Shivraj Singh Chouhan, who is called ‘Mama’ by supporters. Chauhan had said that the women of Madhya Pradesh are his sisters and he would protect them.

She also referred to the statement by the state home minister Narottam Mishra, a day after the Khargone violence, that, “Jin gharo se patthar chale hai unko pattharon ka dher bna denge. (We will turn the houses of those who pelted stones into rubble.)”

Reyaz, who returned to the village to look after his four daughters and one son, is facing a social boycott by the villagers, who are denying rations and groceries to the family. When The Wire visited Kukdol village to meet Reyaz, who is a mason and lives in a one-room house, said he went to a shop to buy groceries. Some village shopkeepers allegedly told him, “Tum Musalmano ke is gao me koi jagha nahi hai, bhago warna yahi maar dunga. (You Muslims have no place in this village. Run away or we will kill you.)”

When news of the boycott travelled to the Khargone district authorities, they deployed a police officer in the village and urged Reyaz to buy groceries from other stores in Khargone or nearby villages. “The police officer told me to make a list of groceries, which he will help us to get from Khargone if the villagers are boycotting us,” Reyaz said.

Balram Rajpoot, the first person named in the FIR. Photo: By arrangement

To verify the claim of boycott, The Wire tried to meet deputy sarpanch Saudan Kalan. A young man stopped this reporter to “verify” his identity. He was Balram Rajpoot, the first person named in the FIR filed by the family of Abdul Hamid. Balram introduced himself as a representative of Gajendra Patel, the Barwani Lok Sabha MP.

He told The Wire his version of the story.

“When the villagers got to know that rioters were being protected by one family, we went to verify it, but they started pelting stones at us.” Asked how they knew the family was sheltering rioters, Balram said, “We got calls, but we don’t know the names of those who gave us the information.” Another villager, Prem Singh Chouhan, who claimed to be a BJP worker, said, “There was no one else in the house but the mob believed those who had taken refuge escaped.”

While this reporter was leaving the village, Balram said, “If any Muslim comes into our village to do business or anything else, it’s a Hindu Rashtra, we will beat them up.”

When this reporter informed the police of Balram’s presence in the village, he was arrested the following day, on April 17. SP Rohit Keswani said, “Balram has been arrested and sent to jail. We have provided protection to the families and are looking for the other accused as well.”

Kashif Kakvi is a Newsclick journalist contributing from Khargone.