Missionaries of Charity Says FCRA Renewal Not Approved by MHA, But 'No Freeze Ordered'

Derek O'Brien, a Rajya Sabha MP from Mamata Banerjee's party, Trinamool Congress, wrote on Twitter that the MHA has "extracted" the statement.

New Delhi: After reports did the rounds on a key account of the Missionaries of Charity, an organisation founded by Mother Teresa, having been frozen, the organisation released a statement noting that no “freeze” has been ordered on any of its bank accounts but that its renewal under the Foreign Contribution Regulation Act has not been approved by the government. Trinamool Congress MP Derek O’Brien has tweeted that this statement was “extracted” by the MHA.

The Union home ministry had earlier claimed it has denied the renewal application and that the freezing of the account was requested by the charity itself.

Earlier in the day West Bengal chief minister Mamata Banerjee had tweeted that the “freeze” was expected to impact over 22,000 employees of and patients in the care of the organisation.

Shocked to hear that on Christmas, Union Ministry FROZE ALL BANK ACCOUNTS of Mother Teresa’s Missionaries of Charity in India!

Their 22,000 patients & employees have been left without food & medicines.

While the law is paramount, humanitarian efforts must not be compromised.

This is indeed shocking. When Mother Teresa wins a Nobel Prize, India rejoices. When her organisation serves the poor & destitute, the govt cuts off their funding. Disgraceful. https://t.co/dpHInSubqo

The organisation eventually released a statement noting that “the FCRA registration of the Missionaries of Charity has been neither suspended nor cancelled. Further there is no freeze ordered by the Ministry of Home Affairs on any of our bank accounts.”

“We have been informed that our FCRA renewal application has not been approved. Therefore, as a measure to ensure that there is no lapse, we have asked our centres not to operate any of the FC accounts until the matter is resolved,” the statement signed by Sister M. Prema M.C. said. 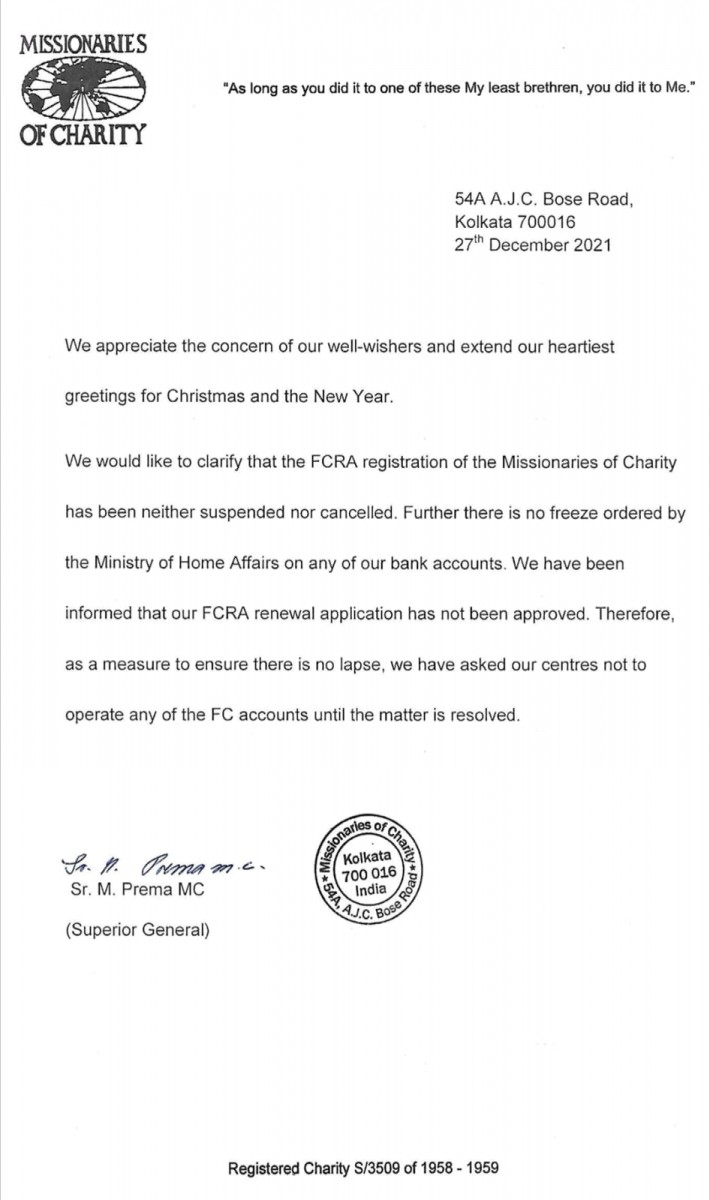 Derek O’Brien, a Rajya Sabha MP from Mamata Banerjee’s party, Trinamool Congress, wrote on Twitter that the MHA has “extracted” the statement.

First the Government of India INTIMIDATES. For weeks, right through to December 25. And then they pile on the pressure to extract this👇Shame on the MHA and its shameless damage control tactics. pic.twitter.com/ikSJtp9Qy5

After a filthy hit job on Mother Teresa’s Missionaries of Charity on December 25,now MHA doing what it does best: SPIN DOCTORING & a COVER UP.

India has an Opposition that will fight the good fight. And I have a leader who will always stand up for the oppressed @MamataOfficial

The Union home ministry has claimed that it did not freeze the bank accounts of Missionaries of Charity and that as per the State Bank of India, the organisation itself sent a request to the bank to freeze its accounts.

In a statement, the Ministry said that while considering the Missionaries of Charity’s renewal application under the Foreign Contribution Regulation Act “some adverse inputs were noticed” and that “in consideration of these inputs on record, the renewal application of MoC was not approved.”

The Wire has earlier reported how even as non-government organisations (NGOs) face severe fund shortages due to changes in the FCRA effected by the Centre last year – which has adversely impacted their ability to reach out to the poor and marginalised in both rural and urban areas during the second wave of the coronavirus in India – the Union government has repeatedly thwarted attempts by Right to Information (RTI) activists to access details surrounding the reasons why the Act was amended.

The MHA added that “no request/revision application has been received from Missionaries of Charity (MoC) for review of this refusal of renewal.”

The ministry said, “Missionaries of Charity (MoC) was registered under FCRA vide Registration No 147120001 and its registration was valid up to 31 October, 2021. The validity was subsequently extended up to 31 December, 2021 along with other FCRA Associations whose renewal application were pending renewal.”

The MHA claimed that the FCRA registration of Missionaries of Charity was valid up to December 31, 2021 and that it “did not freeze any accounts of MoC.”

“State Bank of India has informed that MoC itself sent a request to SBI to freeze its accounts,” it said.

The Vicar General, Archdiocese of Calcutta, Father Dominic Gomes, had earlier issued a statement purporting to confirm the freezing – which the Missionaries of Charity has now denied – of the bank account of the Missionaries of Charity Sisters and Brothers congregations. It added that in doing so, “Government agencies have given a cruel Christmas gift to the poorest of the poor.”

On the kind of impact the move would have on charity work, the statement had said, “Besides over 22,000 direct dependants and beneficiaries at their centres across the country, MC Sisters and Brothers reach out to uplift thousands and are often the only friends of the lepers and social outcast no one will even venture near.”

It added: “Overlooking the fact MCs of St. Mother Teresa give up all worldly goods, sleep on the floor and, and earn no money – giving whatever they have in service to the poorest in every corner of the earth, especially our poorest of Indians – this latest attack on the Christian Community and their social outreach is even more a dastardly attack on the poorest of India’s poor, who the MC congregation serves.”

The Vicar General said he was “appalled by the timing and lack of empathy to consider the humanitarian disaster this decision will cause.”

‘Bogey of conversion is patently false’

Earlier in December, Gujarat police registered an FIR against Missionaries of Charity, claiming it was luring young girls into Christianity and hurting “Hindu religious sentiments.”

The statement of the Archdiocese of Calcutta, Father Dominic Gomes, also raised the issue of the move being linked to allegations around conversion.

It provided a footnote saying, “The bogey of ‘conversion’ always been raised as justification, is more than patently false, [and] boggles the mind with its incredulity – had any Christian organisation seriously tried to ‘convert’ with the efficiency they run their educational, medical and social intuitions; there would indeed be many more Christians converted in the 2,000 years Christianity has been on Indian soil that the 2.3% minority today.”

The Vicar General further added that “Christianity, across the globe – is not defined by conversion, but by their unappalled love for their neighbours in action through their social outreach and social justice in society.”

‘Those performing selfless service are being punished’

Earlier, former president of All India Catholic Union, John Dayal told The Wire that “reports this morning that the government has frozen the account of the Sisters and Brothers of the Missionaries of Charity, the movement started by Bharat Ratna and now Catholic Saint, Mother Teresa, are heart wrenching.”

He said, “The nuns and brothers do not run plush schools or private universities that earn in the millions of dollars and nor are they funded by the government or its agencies, or PM CARES, for that matter. They run homes for newborn infants abandoned and left on the streets and garbage dumps by our own young women and men, and for afflicted young that no government or charitable orphanage would willingly care for. And they nurse the destitute and dying, lending some dignity to their passage.”

Reflecting on the selfless service of these nuns and brothers, he said, they get no salary, but they do have staff members – drivers, cooks and others – who need to be paid a salary, and there are medicines and food to be bought. As such, he slammed the FCRA move, saying it was “tantamount to starving them, and torturing the children and old in their care, to bring them to submission.”

Note: This article has been edited since publication to incorporate the Missionaries of Charity’s statement.