Led by Latin Catholic Archdiocese, protesters say the project will adversely affect the livelihood of the fishermen, coastal ecosystem and the ecology of the Western Ghats due to the mining of granite stones. 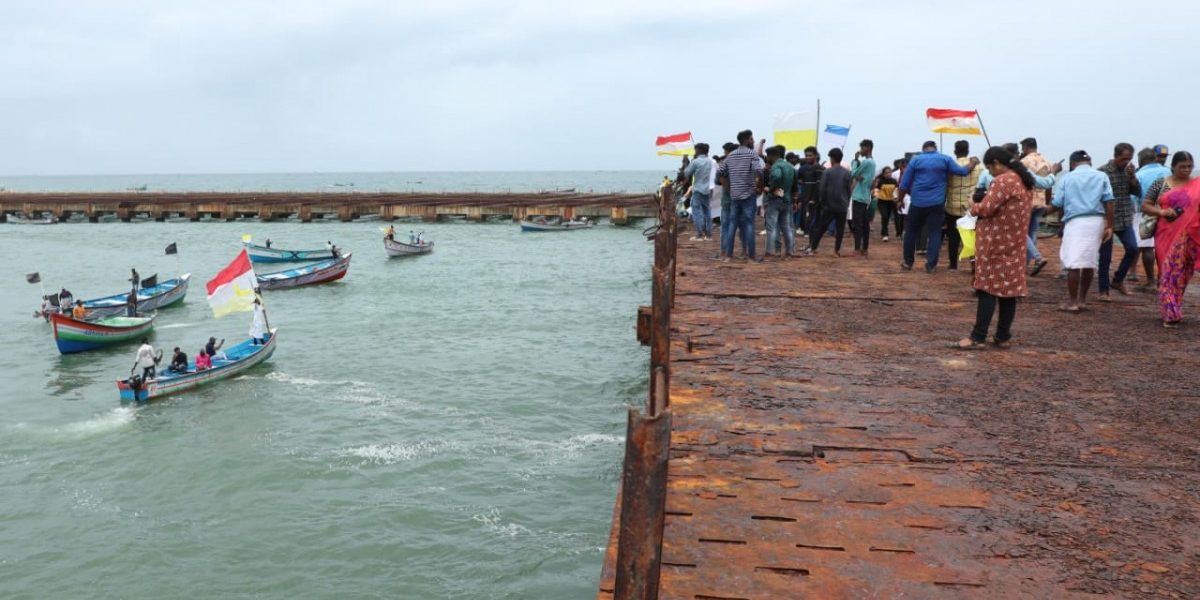 Fishermen also took to the sea in their boats to voice their protests against the port project. Photo: By arrangement

New Delhi: For over 100 days, protests have been raging against Kerala’s Vizhinjam Seaport, which is being developed by the Adani group in the southernmost part of the state.

Despite the Kerala government claiming that all the demands put forward by protesters have been accepted, protesters led by Latin Catholic Archdiocese in Thiruvananthapuram say the project will adversely affect the livelihood of the fishermen, coastal ecosystem and the ecology of the Western Ghats due to the mining of granite stones for the same.

With no signs of the deadlock lifting, the Adani group expressed fears that the project might overshoot its December 2023 deadline if the protests continued. To finish the project as early as possible, the state government appealed to the church authorities to end the protest, saying the port will have a positive impact on the industrial and economic sectors of the country.

Also read: Why Fisherfolk Are Protesting Against Adani’s Vizhinjam Port in Kerala

The government claimed it had accepted almost all demands of the protesters. However, the protesters are not ready to budge, alleging that the government has not given any written assurances on their demands even after many minister-level discussions.

The Vizhinjam International Transhipment Deepwater Multipurpose Seaport is being developed in a landlord model with a Public Private Partnership component on a Design, Build, Finance, Operate and Transfer (DBFOT) basis at an estimated cost of Rs 7,525 crore.

Adani Vizhinjam Port Private Limited, the private partner, commenced the construction work on December 5, 2015. The port authorities clarified that 70% of the work has now been completed but for the last few months, the construction was halted due to the protests.

The protesters have been demanding the construction of the deepwater port be stopped as it has affected the coastal ecosystem. They have urged the government to conduct a proper environmental impact study, besides putting forward six other demands including rehabilitation of families who lost their homes to sea erosion, steps to mitigate coastal erosion and financial assistance to fisherfolk on days weather warnings are issued.

The protesters have also urged the government to provide compensation to families of those who lose their lives in fishing accidents, subsidised kerosene for fishermen and a mechanism to dredge the Muthalapozhi fishing harbour in Anchuthengu in Thiruvananthapuram district.

Eugene H. Pereira, a church priest who represents the protesters, told PTI the project is planned in a high eroding coastal area which may adversely affect the fisherfolk. He said that they have demanded an expert panel to study the impact.

Perhaps, for the first time, arch-rivals Kerala ruling party CPI (M) and Bharatiya Janata Party (BJP) came together to take out a ‘long march’ against the agitation being carried out by fisherfolk. They allege that protesters are being misled by those who have “ulterior moves” and “vested interests”.

The protesters are being controlled by a group which has ulterior motives. They have vested interests and that is why they are continuing with the agitation even after the government has agreed to their demands,” said CPI (M) Thiruvananthapuram district secretary Anavoor Nagappan, according to Times of India.

Also Read: Why Fisherfolk Are Protesting Against Adani’s Vizhinjam Port in Kerala

Multiple ministerial-level meetings were held with the protesters to solve the crisis but the agitators claim that their demands were not met. “The government has not yet given us any written assurances on anything. Our demand on kerosene has not yet been met. With regard to rehabilitation of displaced families and providing rent for their housing, the government needs to be proactive,” he said.

“The rent assistance is very less. The poor fishermen have to pay a huge deposit or advance for renting a house in a city area like this,” the priest said. The state fisheries and port department authorities sought to pacify the protesting fishermen, saying the shoreline changes and other environmental aspects are being continuously monitored over a distance of 20 km on either side of the port.

A scene from the protests at the tent outside the entrance to the Vizhinjam Port near Muloor, Thiruvananthapuram, Kerala. Photo: By arrangement

Kerala minister of ports Ahammad Devarkovil said the National Institute of Ocean Technology and the National Centre for Earth Science Studies have been constantly studying the environmental parameters, and the Shoreline Monitoring Cell appointed by the National Green Tribunal (NGT) has not yet made any observation regarding coastal erosion.

“The state government wants to finish the project as early as possible because it is a huge commercial activity which will bring major changes to the industrial and economic sector of not only Kerala but the country also,” Devarkovil told PTI.

Accepting the demands of the fishermen, the state government had on October 6 appointed a four-member expert panel to examine whether there has been any such coastal erosion consequent to the work done for constructing the Vizhinjam port. The protesters complained the expert panel constituted by the government does not have any of their representatives.

The port is said to be the only transshipment hub in the Indian sub-continent, closest to the international shipping routes, and is centrally located on the Indian coastline. Meanwhile, the Adani Group, which has already moved the Kerala high court and secured a favourable order to continue the construction of the port, said if the protests continue, their deadline of December 2023 might get extended.

“We are losing a golden hour. The time period between September to May is best for undertaking work at sea as it will be comparatively calm. Now we have already lost three months. Our aim was to finish the project by December 2023. It might get extended due to this delay caused due to the protests,” a company spokesperson told PTI.

The company said that almost 70% of the total work of the port has been completed but only 50% work of the berth construction and the breakwater work could be finished.

However, agitators claimed the Adani Group was “cheating” the Kerala government and the people of the state by giving false claims on work completion and environmental impact.

“The work has not reached 70% as claimed by Adani Group. They are cheating the Kerala government and the people of the state. They claim that they have purchased some cranes and other equipment. But those are still abroad. Now they need to mine the Western Ghats for the boulders for the rest of the construction. All these are going to adversely affect the environment,” Pereira said.

On August 23, Kerala chief minister Pinarayi Vijayan told the assembly that the protest seemed ‘orchestrated’ and that the government was ready for talks, and wanted to resolve the concerns faced by the fishing community. “We have accepted almost all of their demands,” a senior official from Minister Devarkovil’s office said.

“It’s not possible for the government to stop the project and conduct a study as it will invite huge compensation for delaying the project. The project was sanctioned after numerous studies as directed by the Supreme Court and the NGT. However, accepting their demand, the government has formed an expert panel,” the official said. On reducing the price of kerosene, the official said it was decided by the union government and added “since bringing down the price was not an option, the state government has agreed to bear the cost of one-time conversion of such engines to diesel or CNG. We are already giving Rs 25 as subsidy on kerosene.”

The official said nowhere in India, fishermen are given compensation for the day when a weather forecast warning is issued. A large number of people have been staging protests outside the main entrance of the multi-purpose seaport at nearby Mulloor for a few months. Armed with the latest High Court order to continue with the construction works, the government said the construction-related vehicles will reach the port on Friday.