Several non-residential Kashmiris woke up to discover that their colleagues and family had seemingly left WhatsApp groups.

Srinagar: Late on Wednesday evening, Mir Basit, a journalist from Kashmir, was taken aback when he checked the WhatsApp group of ‘Free Press Kashmir’ – a web portal and a weekly print publication he worked for.

“All my colleagues had left the WhatsApp group,” Basit said.

Basit’s immediate thought was whether internet had been restored to the Valley. He then wondered that if that was the case, why would anyone leave the group?

Basit had moved to Bengaluru on October 28 after the government-enforced internet gag in Kashmir forced the organisation where he worked to shut down. Worried, he instantly called one of his colleagues back home to know why the colleague and others were suddenly and inexplicably “leaving” the group.

The colleague told him he had no access to internet and had made no attempt to exit the group.

Basit checked his family WhatsApp group to find that his cousins too had seemingly left. Upon calling some of them, Basit realised they too knew little of what was happening.

“They are not leaving the group on their own. They just don’t know that this is happening to them. Like everything else,” he wrote.

BuzzFeed News was the first to report about Kashmiris departing from WhatsApp groups. Quoting a spokesperson for Facebook, which owns WhatsApp, the outlet reported that the disappearances were the result of the messaging app’s policy on inactive accounts.

“To maintain security and limit data retention, WhatsApp accounts generally expire after 120 days of inactivity,” the spokesperson told BuzzFeed. “When that happens, those accounts automatically exit their WhatsApp groups. People will need to be re-added to groups upon regaining access to the Internet and joining WhatsApp again.”

But there were others who took to social media platforms to inform that Kashmiris were not only disappearing from WhatsApp groups but their individual accounts too were getting deactivated. 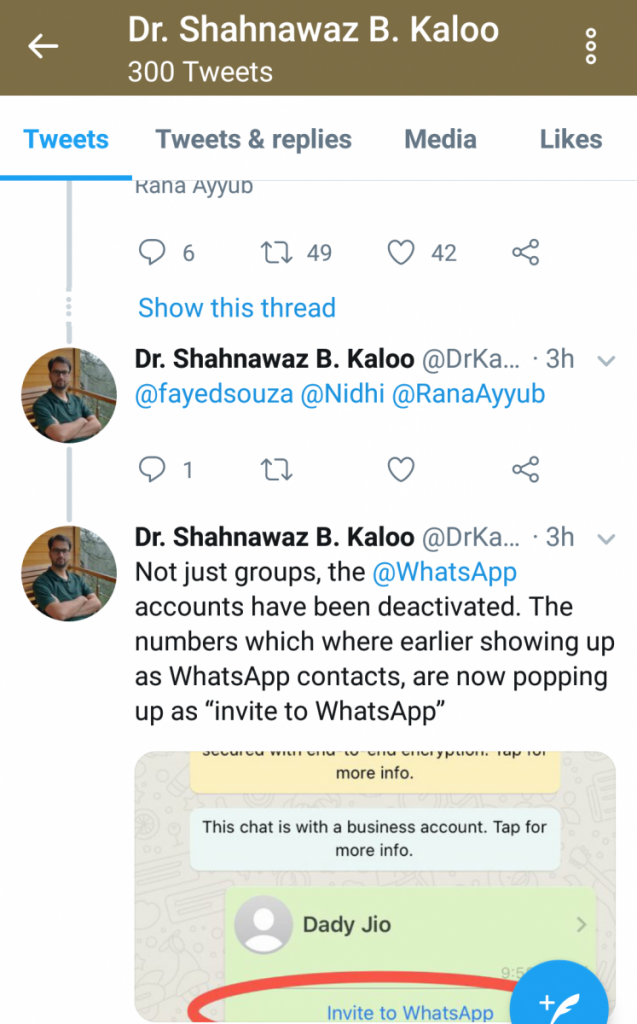 “Not just groups, the [individual] WhatsApp accounts have been deactivated,” Dr Shahnawaz B Kaloo wrote on Twitter.

In another tweet, Dr Kaloo, who lives in Delhi, said, “The numbers which were earlier showing up as WhatsApp contacts, are now popping up as ‘invite to WhatsApp’.” The latter is the default option for contacts who are not on WhatsApp.

Talking to The Wire, Dr Kaloo said he was part of at least 10 WhatsApp groups from Kashmir. He said, in each of these groups, a message pops up against each number in use in Kashmir that the member has left the group.

“I tried to send a WhatsApp message to my father to check. His WhatsApp account was no longer functional,” said Dr Kaloo. 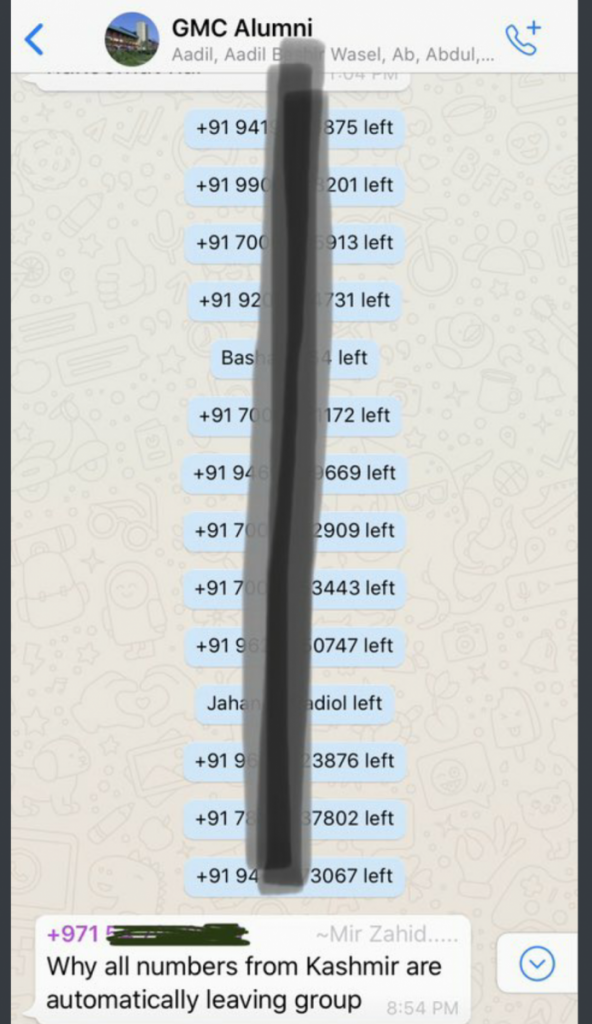 The Kashmir Valley is reeling under unprecedented internet gag for the past four months after the government of India read down Article 370 and bifurcated the state of Jammu and Kashmir into two Union Territories on August 5.

There has been no word from the government on the restoration of the services.

Both the Centre and local government have defended the internet gag, saying there were apprehensions that Pakistan might “foment trouble” if the service was restored.

While the development that Kashmiris were being removed from WhatsApp took people outside Kashmir by surprise, WhatsApp users in the Valley have no idea about the discontinuation of the service to them in the absence of internet.

“How would we know about it?” said Mubashir Ahmad, a Kashmir University student who is part of a WhatsApp group which has members from JNU and three other universities.

“For the government of India, the internet is no longer a basic right in Kashmir, even though it is a service enjoyed uninterrupted across the world,” said Ahmad.