Despite having been in power for years now, the BJP has done little to ensure Kashmiri Pandits are able to live safe, inclusive lives in the Valley they once had to flee. 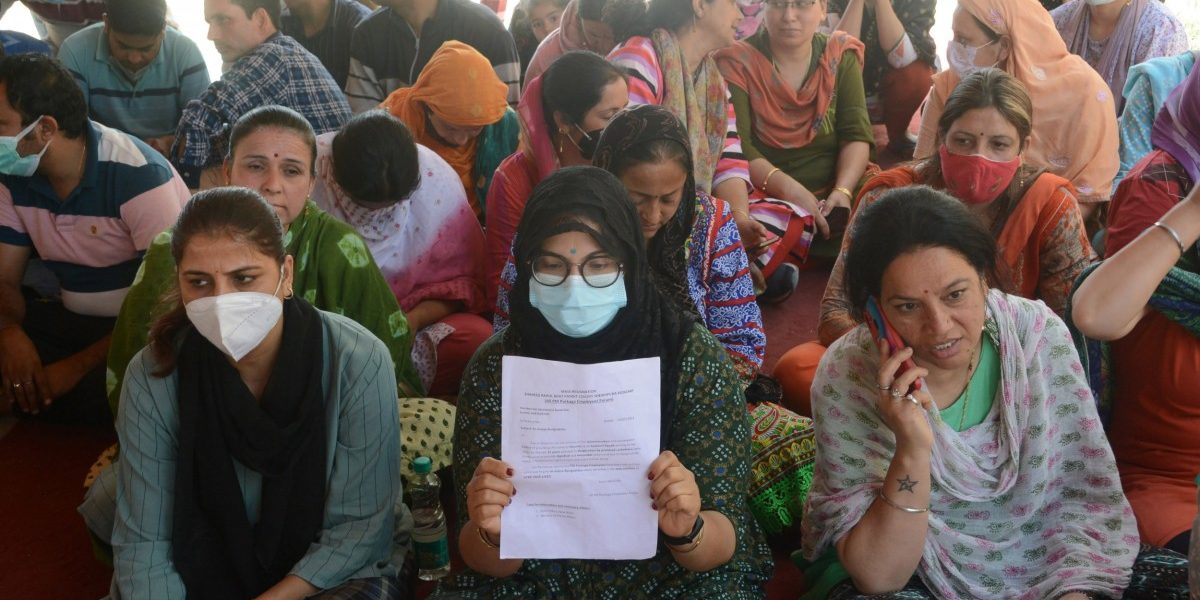 File image: Women from the Kashmiri Pandit community during their sit-in protest against the killing of government employee Rahul Bhat, after police stopped their protest march towards Srinagar, at Kashmiri Pandit transit camp in Sheikhpora, near Srinagar, Saturday, May 14, 2022. Photo: PTI

The Wire reached out to a relative of Bhat’s in Sheikhpora, Budgam. Requesting anonymity, the relative said that the protesting Pandits were deeply agitated by Lieutenant Governor Manoj Sinha’s inaction concerning the killing. “He was murdered 24 hours ago, two men stormed into the office, called out his name, he responded and they shot him. This is the state of security for us Pandits,” the relative said. He also alleged that detained protestors had been taken to Humhama and Budgam police stations.

Bhat’s wife, Meenakshi, said that her husband felt “insecure” while working in Chadoora. Meenakshi also revealed to India Today that her husband, Rahul, had requested the local administration to transfer him to the district headquarters, but despite repeated pleas, he wasn’t transferred.

On April 6, Nityanand Rai, the Union minister of state for home affairs, said that since 2019, 14 Hindus had been killed, of whom four were Kashmiri Pandits.

Kashmiri Pandit leader Sanjay Tickoo, who heads the Kashmiri Pandit Sangharsh Samiti (KPSS), did not leave the Valley amid the heightened insecurities in the 1990s. Now, Tickoo says that there is lack of efforts by the union territory (UT) administration as well as the Union government to resettle migrant Kashmiri Pandits in the Valley.

The Kashmiri Pandit leader, who has been vocal about the injustices meted out to the community, told The Wire, “The government says there is no militancy, but in the last one year, the graph has gone up. Dignitaries, delegates are being brought in, they’re shown the Dal Lake, tourists will also give you the same ‘normalcy narrative’ during their 10 days’ stay. But the situation is not better, as is being portrayed by certain media, and of course there is a massive political vacuum.”

Arguing that the Government of India has achieved nothing after reading down Article 370, Tickoo said that militancy hasn’t been wiped out of the Valley, and the separatist mindset is now more prevalent among self-radicalised youth since August 2019. “The GOI is not in a concrete position to facilitate the return of Pandits. If everything is normal, they should begin talking to the those Pandits who lead miserable lives,” he remarked. Talking about how Pandits, over the years and successive governments, have been made passive consumers of relief, Tickoo said that Pandits had always been pushed towards documentation, availing relief packages and not towards return and resettlement into the valley.

KPSS estimates that at least 8,500 Pandits live in the Valley currently.

The Bharatiya Janata Party (BJP) is completing eight years in power this year. While their manifesto has always spoken of the situation of the Pandits, those who actually live in ghettos in the shape of transit camps feel that there is no value to their lives for the BJP.

Tickoo, who is against the idea of ghettos, says that at present there are seven transit camps in the Valley, but 25 families have also rebuilt their houses because their children have been employed under the return package. “It is a ray of hope, but the security situation is not normal,” he explains.

Living in the Jagati Camp, Jammu for 12 years now, Ramesh Koul feels that the BJP has done nothing to improve the condition of the community in the eight years that it had. “This is my second camp in the last 30 years, and even the relief that we get is miniscule. For months we have been protesting to increase the relief amount from Rs 13,000 per family to Rs 25,000 per family, is this not in the BJP’s control?”

Pandits at the Purkhoo camp in Jammu feel that their existence in camps even after they voted for the BJP explains how little the party cares about on-ground impact. They feel that while they were promised return and resettlement, in effect they see no change, but only a spike in attacks on Hindus. The community also feels that the return policies which are still in the nascent stages should not push Pandits to ghettoisation; rather they should aim at coexistence with Kashmiri Muslims.

Koul, originally from Anantnag, misses his village Krandigam, and has been writing to various authorities including the PMO to reclaim his property in the village. “I have received no help. I have written multiple times to the PMO since 2015, to reclaim my gutted house. Is this how he wishes to help Pandits’ return to the Valley? How will we move out of these closed ghettos?” 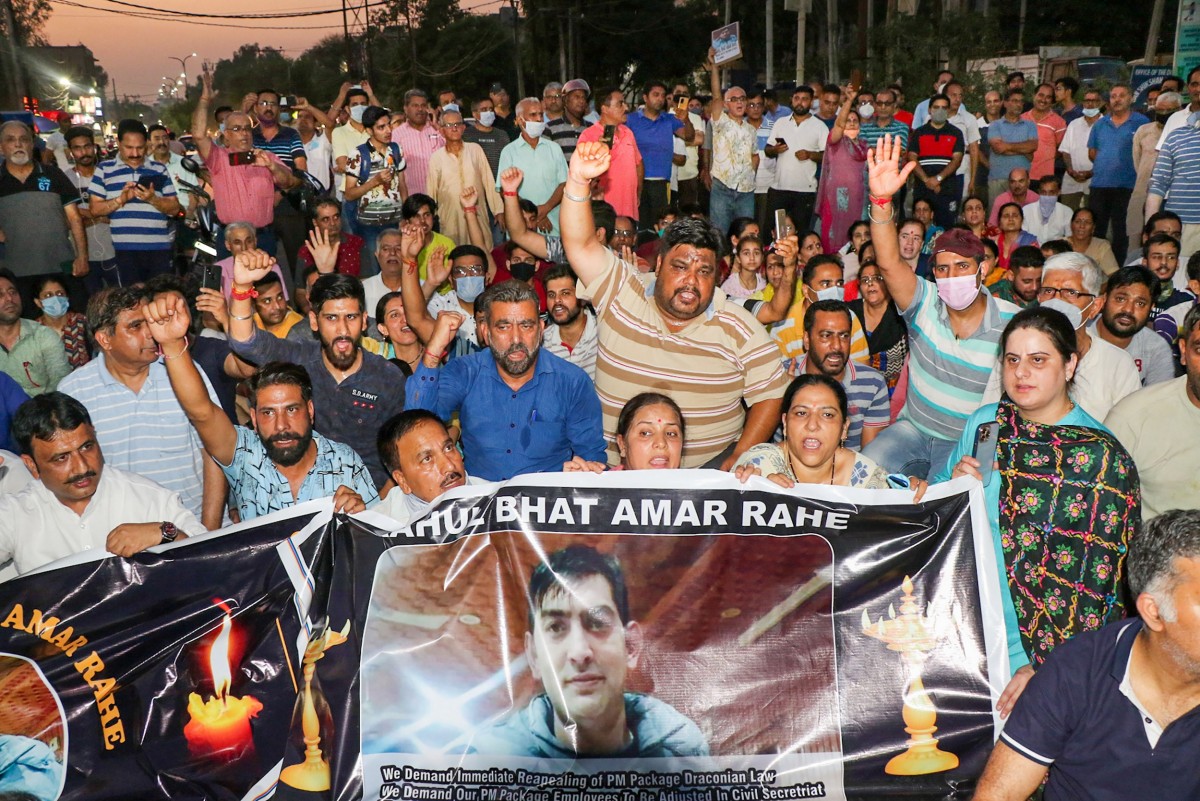 Kashmiri Pandits raise slogans during a protest against the Pakistan over the killing of Rahul Bhat, in Jammu, Friday, May 13, 2022. Bhat, a government employee, was shot at by militants inside his office and later succumbed to injuries Thursday. Photo: PTI

Others at Jagati who migrated from various Kashmiri districts feel that their ghettoisation hasn’t been taken up efficiently by the UT admin. They also suggest that Union government has to consider those people who actually wish to return. Suggesting movement, Tickoo says, “Let it be a satellite city where 60% pandits are allotted land and 40% to other communities, to revive the composite culture of Kashmir.”

According to the Union home ministry, only 17% of the proposed accommodation for Kashmiri Pandits has been completed in the past seven years. Till February this year, construction of only 1,025 units had been partially or fully completed, while work at more than 50% units was yet to start.

What lies in the Kashmir Files?

Since the release of the movie, The Kashmir Files has been actively promoted by the BJP. Several BJP-ruled states have announced that the movie will be tax-free in their respective states. Pandits who spoke to The Wire talked how they felt about the film and their own experiences of the exodus.

Tickoo says that the mentioned incidents did occur but the picturisation is wrong. The film, he said, “labelled all Kashmiri Muslims as jihadis”. “Imagine, those Kashmiri Muslims who are Indian by heart, how they must have felt about of their affiliation with India in the past 70 years upon being shown like this,” he lamented. When asked about the reaction of various stakeholders in Kashmir on the film, Tickoo maintained that it would definitely endanger the security situation of Pandits.

Ravinder Pandita, 58, a Kashmiri Pandit who had moved to New Delhi in 1990, agrees with Tickoo. In his personal experience of fleeing Kashmir, he recalls a taxi driver named Maqbool who ferried countless Pandit families to nearby bus and train stations day and night with great concern and care. “Kashmir Files shows what happened to Pandits, but it misses out on showing the fate of Sikhs. As for Muslims, if it wasn’t for Muslims like Maqbool, who knows what would’ve happened to my family?”

Also read: Book Extract: The Story of the Pandit Exodus Through the Eyes of a Kashmiri Pandit

Koul also feels that painting all Muslims with the same brush only negates the whole purpose of creating awareness through a film about the pain of Pandits. But what he also says is, “Film bana di, promote kar di, ab BJP ko kaam bhi karna chahiye (You’ve made the film, promoted it, now the BJP should do some real work).” He adds, “We don’t need more hate, Kashmir is a sensitive place, playing Hindu-Muslim there will only create more harm.”

Pandits in Budgam also expressed the same sentiment towards the film, but made a very striking observation about the spike in minority community killings in the Valley. They claimed that Hindu killings have risen manifold since the death of Hurriyat leader Syed Ali Shah Geelani. They also feel that while they expect the majority community to express solidarity, they understand that the Muslim community also fears being labelled as ‘Pandit sympathisers’ and subsequently killed.

On April 1, Congress member in the Rajya Sabha Vivek Tankha introduced a private member’s bill in the House – ‘Kashmiri Pandits (Recourse, Restitution, Rehabilitation and Resettlement) Act, 2022’ – seeking to provide for social, political and economic rehabilitation of Pandits, protection of their property, restoration of their cultural heritage, ensuring their safety and security, and provision of rehabilitation and resettlement package to them.

The BJP government has ruled J&K directly for four years now, ever since the BJP withdrew its support from the People’s Democratic Party-BJP alliance in 2018 and successively ended the constitutional guarantees of the region in August 2019. But the return and resettlement of Kashmiri Pandits to their homeland remains mishandled.