Jaipur Lockdown: 3 Kashmiri Boys 'Beaten Up' by Police While Out on Delivery Duty

While police have denied the allegation, the condition of one of the boys has allegedly been deteriorating. 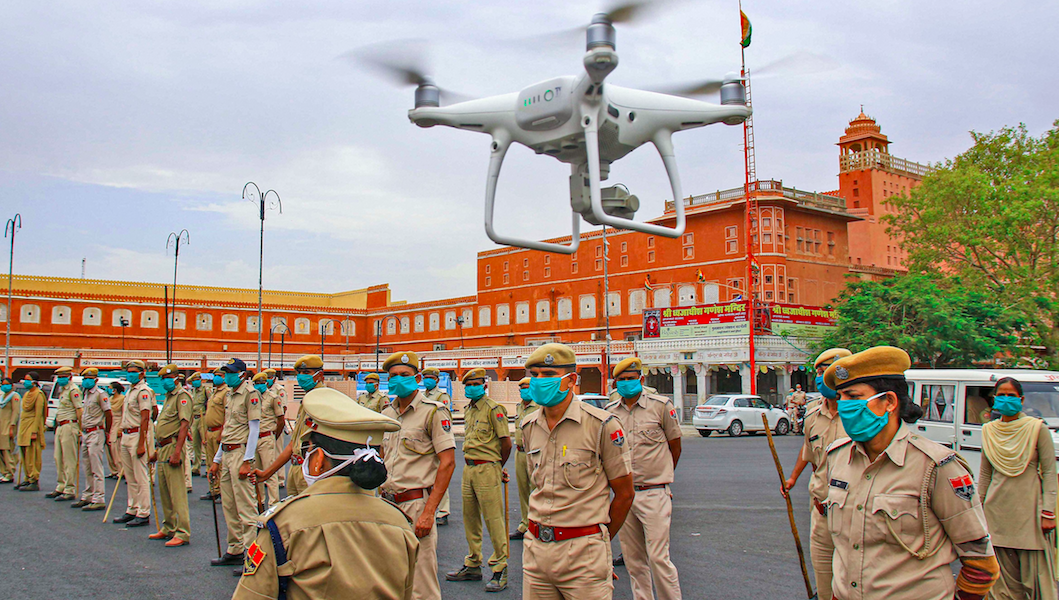 Representative image of police personnel in Jaipur during the lockdown. Photo: PTI

Jaipur: Three Kashmiri boys working as deliverypersons in Jaipur’s Hassanpura area were allegedly beaten up severely by local police while they were out delivering food.

One of their co-workers, Altaf, who spoke to The Wire, said that the incident is a week old but the condition of one of the three, Ishfaq Ahmad, has deteriorated since then.

“All the three boys had kept quiet about the incident as they had feared that it would worry their parents back home in Kashmir but today, Ahmad told us that the pain in his head has been unbearable. So, we had to speak out,” said Altaf.

He said that on April 10, about 14 boys, including the three from Kashmir, were out on their daily duty when local police intercepted them.

Upon identifying them as Kashmiris, the policemen allegedly called them ‘traitors’ and began beating them up with lathis.

Altaf claimed that police were mild on the local boys and did not hit them hard, but “channeled all their energy to beat up the Kashmiri boys.”

“If one looks at their photographs from the day they were beaten up, one can see how ruthless the police were. It appeared as if they were exacting revenge from Kashmiris,” he addd.

The boys were taken to the police station. They were taken to hospital only at 10 am the next day, and then, produced before the magistrate.

Denying the allegations, Rajendra Singh, Station House Officer at the Hasanpura police station in Jaipur said, “The police had only pointed at them when they were walking down the road along with their bedding. They were neither beaten up, nor put in the lock-up.”

Upon being asked as to why the boys had injury marks, he said,” Anyone can show injury marks, even I can, but that doesn’t prove that police injured them.”

Altaf and many others from Kashmir work as delivery boys for caterers in Jaipur. Most have not been paid salaries for some months now, making it difficult for them to think of leaving for home, even when the lockdown ends.

“We came here to earn, there would be no point in leaving work and going back. Most of us have not even been paid salaries. We won’t leave without taking back our money,” said Altaf.

He also added that they are facing food shortage at their house. “We have roza [fasting during the holy month of Ramzan] but are not able to eat proper food afterwards.”

Altaf further said that civil society in Jaipur was aware about the incident but decided to look the other way.

“For the past two hours, after Nasir Bhai tweeted, some four-five people including social activists and a few journalists spoke to us on a conference call and said that medical attention would be provided to us, but it happened only after we put the information out on Twitter.”

Nasir Khuehami, a 24-year-old student from Bandipora in Kashmir had tweeted today about this incident.

🆘
Call for a help:
A group of students Stranded at Hassanpora near NBC,Jaipur, Rajasthan.They are going through the pain & agony.Having short of money, Instead of help they hv been beaten by the police for being a Kashmiri. Kindly Intervene @ashokgehlot51 @RajCMO @_lokeshsharma pic.twitter.com/75ziZ50Mwt

He administers a WhatsApp group to help Kashmiris living and working in other parts of the country. He was informed about the incident by Altaf.

This is fourth incident of violence against Kashmiris reported in Rajasthan in the past one year.

Earlier in February, a Kashmiri boy named Basit Khan alias Ghulam Mohiudin (18), working as a caterer in Jaipur’s Harmada area, was beaten to death, allegedly by his co-workers from Mumbai.

Also read: Kashmiri Boy Beaten to Death By Co-Workers in Jaipur, One Arrested

In November last year, four Kashmiri students were beaten up by fellow students at Mewar University in Rajasthan’s Chittorgarh over the issue of a gate pass that was allegedly given to a Kashmiri student and denied to a student from Bihar.

In September, a 23-year-old student from Kashmir was tied to a pole after having been made to wear women’s clothes and thrashed by some men in the open market in Neemrana.