Kashmir: Labourers Claim They Were Forced to Swell the Audience at Army-Organised Mela

Army spokesperson denies allegations that the labourers were picked up on their way to work and forcibly transported to the event at Yusmarg. 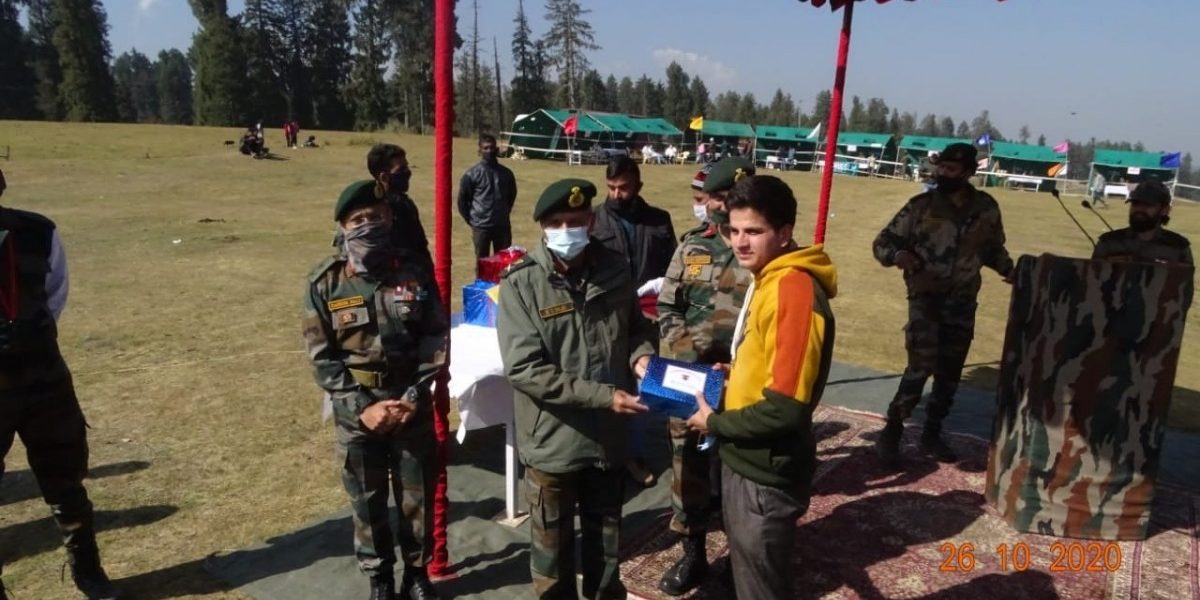 A man is felicitated during the Army's mela in Kashmir's Budgam district. Photo: Twitter/@ChinarcorpsIA

Budgam: Scores of people who attended a youth festival organised by the Srinagar-based Chinar Corps at the Yusmarg area of Central Kashmir’s Budgam district on October 26 allege that they had been forcibly taken there by the Army when they were on their way to work.

The Yusmarg mela is held annually by the Indian Army. It was attended by Chinar Corps Commander Lieutenant General B.S. Raju and other senior members of the Army, as well as school children and the labourers who later claimed they were taken there against their will. Hundreds of Army jawans guarded the meadows of Yusmarg as the festival commenced and the Jammu and Kashmir police were deployed to monitor the movement of private and public transport.

According to 24-year-old Ishaq Ahmad (name changed), a daily wage labourer, he was on his way to work with nine other men when their vehicle was stopped near Rahmoo village of Pulwama district by the members of 53 Rashtriya Rifles.

“The driver was asked to stop and they told us to come out,” said Ahmad. “We thought they would check our belongings and identity cards, as is the routine. But when they asked the driver to leave and kept us there, my heart started racing.”

Soon, the Army jawans told Ahmad and his colleagues to board a bus that was stationed at the side of the road. Imtiyaz, one of Ahmad’s colleagues, asked, “Where are you taking us? We are labourers and have to go for work.”

The response he received terrified the men, since J&K is notorious for instances when people are ‘disappeared’. “Aap ko Ladakh lena hai (We will take you to Ladakh),” said an army man. According to Ahmad, the man then laughed and said, “Chadho chup chaap, varna maar maar ke chadhayenge hum (Board the bus quietly or we will beat you up and bundle you in).”

When the bus entered the meadows of Yusmarg, the men on board heard cheers and loud music. They saw a big tent, multiple platforms and chairs. They were told to step out, sit among the audience and enjoy themselves.

“We were shocked. All we could do was go to a corner and sit silently,” Ahmad told The Wire. “We were worried because there was no signal for our mobile phones and we needed to contact our families and our boss, who was expecting us at the workplace.”

Though they were ordered to enjoy themselves, the men worried about losing their day’s wages. “I didn’t even sip a glass of water through the day because it went against my conscience,” said Imtiyaz. “I am a religious person. I don’t enjoy music and dance shows. I just wanted time to move faster so I could leave.”

When the drones that were being used for crowd control hovered above the men, they hid their faces. “That was scary for us,” said Imtiyaz. “If our faces were captured by the cameras and the pictures go viral on social media sites, we will be labelled as army workers. In a place like Kashmir, this is dangerous.”

The Wire spoke to about 15 labourers who were at the event. Each of them said they were taken to the festival in the same manner that Ahmad and Imtiyaz described. Each mourned the loss of his day’s income.

“This is the peak season of our work and during this time, we work for extra hours in the apple orchards to earn more. After a few weeks, work will be difficult to find because winter will have set in. Facing such actions from the forces only adds to our worries,” said Ahmad.

According to Ahmad, commuters in south Kashmir, such as labourers like him, are witness to the armed forces’ ‘harsh actions’ when they travel for work. “There are many checkpoints in Pulwama district and we need to show our mobile phones and answer their questions every time we are stopped,” he told The Wire. The questions asked by the army personnel are mostly focused on militants.

“They claim that we work for militants and question us on our political stand. We are daily wage labourers. Why would we wish for trouble for our families?” asked Ahmad.

Two sides of the story

Colonel Rajesh Kalia, chief spokesperson of the armed forces in J&K, said that the allegations “of labourers being ‘forcibly bundled’ in buses and taken for the mela are unfounded, malicious and levelled with a malafide intent to malign the image of the Army”.

Raju, who is the general officer commanding the Srinagar-based 15 Corps (also known as Chinar Corps), told the press at the festival that militants will face ‘tough action’ from the Army. “However, those willing to return by shunning the path of violence are welcome. We will facilitate their return,” he said.

According to Raju, the army organises youth festivals every year. “Today, the participation of people is more compared to previous years. I could see doctors and some NGOs too participating, while the youth are showcasing their talent,” he told the press.

After they returned to an area which has cellphone signal on their way back home, Ahmad, Imtiyaz and their colleagues received tens of notifications of missed calls from family and friends, all anxious about their safety.

“My absence today triggered many apprehensions in my mother’s mind,” Imtiyaz said. “In a place like Kashmir, if you go missing for even one day, chances are that you will either be found dead or in the ranks of the militants.”