Kashmiris who put their faith in the idea of India, advocating it in Kashmir and defending it throughout their lives, today find themselves sidelined, humiliated, discredited – and arrested. 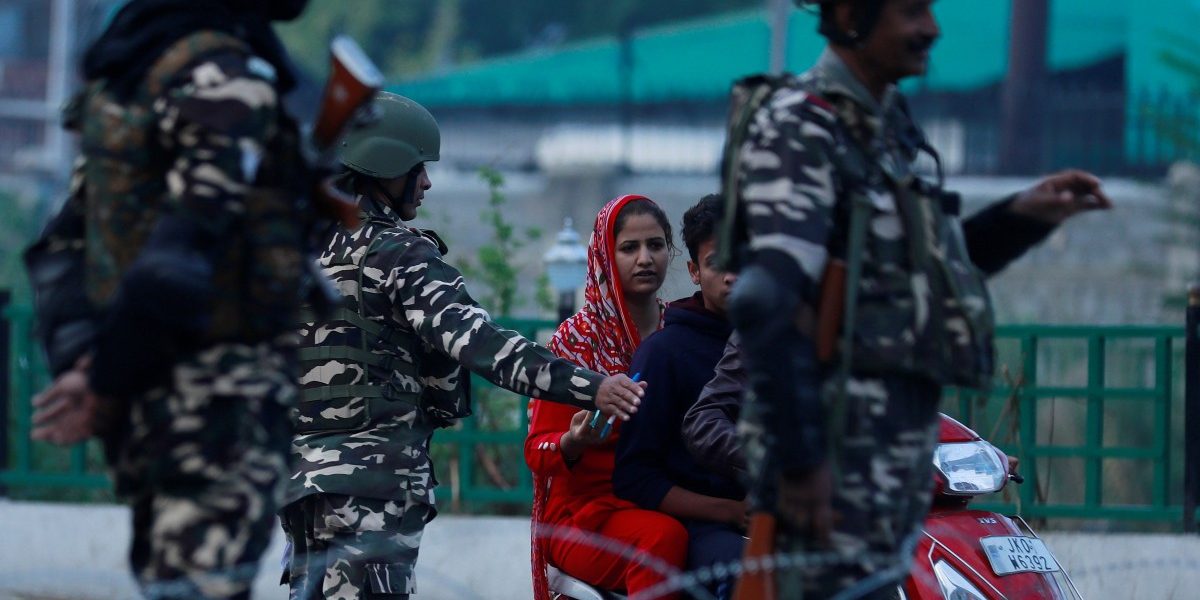 Indian security personnel stop Kashmiri residents as they stand guard on a deserted road during restrictions after scrapping of the special constitutional status for Kashmir by the Indian government, in Srinagar, August 23, 2019. Photo: Reuters/Danish Ismail

On the evening of August 4, the last WhatsApp message from my brother, who is based outside Jammu and Kashmir, sounded concerned. There was looming uncertainty, fear and panic because of a series of government orders leaked online in the days prior to the government decision: “Please stock up enough essentials at home for at least 20 days…”

Before I could reply to his message, the internet was suddenly cut. Landline and mobile phone services, including broadband internet, was shut down. We were suddenly cut off from each other and from the outside world.

Confined to our homes as an indefinite curfew was enforced, and without any means to communicate, the siege around us tightened. My parents, who had left for Hajj a few days before the lockdown, couldn’t talk to us after the communication shutdown. We haven’t heard from them for more than 10 days now. We had no means of knowing if they were doing okay there. We couldn’t even greet each other on the day of Eid, as all phone services remained shut. The only way I could know what was happening outside was through some news channels. Even the local cable network service was shut down. Our set top box was somehow working.

Also read: There Is Only Fear and No ‘Freedom’ in the Northeast and J&K

On the morning of August 5, I woke up and switched on my TV to find that the Bharatiya Janata Party government had suddenly brought in a Bill to read down Article 370 and also bifurcate the state into two union territories in one go, while the entire population of the state was kept uninformed and locked up in their homes.

The brazenness of the unilateral decision, while imposing curfew and imprisoning even mainstream leaders and former chief ministers of the state, was shocking, although not surprising for the people who knew all along that something sinister was being planned by the ruling government. Despite multiple denials by the governor, the flurry of government orders leaked online in the days prior to the revocation, the subsequent evacuation of tourists, Amarnath yatris and students from outside the state clearly signalled that something worse was coming.

For mainstream political parties and leaders like Mehbooba Mufti, Farooq Abdullah and Omar Abdullah, the unthinkable had been done from New Delhi without their knowledge, leave alone seeking their opinion. The idea of mainstream politics in Kashmir was made irrelevant in one stroke, as the decision was accepted in both houses of parliament within hours of its introduction by Amit Shah. The mainstream leaders were immediately put under house arrest. The message to the mainstream parties and politicians who were bypassed and humiliated in the process was clear – you’re no longer required now, and you don’t matter for New Delhi.

As the shocking events unfolded, almost all Hindi and English news channels lapped up the ruling government’s narrative on the reading down of Article 370 and bifurcation of the state. They didn’t raise relevant questions about the BJP government’s unilateral decision to push the Bill and resolutions, without any consultation with the people and the state legislative assembly. Some anchors even openly sided with the ruling government, naively justifying how the removal of Article 370 will benefit J&K.

The coverage about how more than 10 million people were locked up inside their homes, deprived of all means of communication, was mostly missing or pushed to the margins. More airtime was given to BJP and RSS leaders and representatives and ruling government ministers from New Delhi who argued in favour of the revocation. Those who opposed it, or spoke about the complete lockdown in the Valley, were ridiculed and dismissed on air.

In the first few days of the lockdown, there was almost negligible coverage of how the state-enforced curfew and communication blockade was affecting the besieged civilian population in distress. No one knew how hundreds of patients were facing difficulties reaching hospitals, unable to even call even ambulances in case of emergencies. Most of the Hindi and English news channels were busy projecting the constitutional deceit and the subsequent lockdown as some sort of a welfare measure and a developmental step for the people of Kashmir.

Also read: What Happens When Your House Catches Fire and You Can’t Call Emergency Services

News channels were also quick to show celebrations of some Kashmiri Pandits on the streets of New Delhi, Jammu and other states. Not a single protest against the move in the Valley was covered. The worst siege and humanitarian crisis faced by over 10 million people was dismissed in the name of “preventive measures” and “restrictions”. The mainstream media was more eager to amplify the state narrative. The media was also in a hurry to show how “normalcy returns” in Kashmir.

India Today’s managing editor Rahul Kanwal, in one of his news shows, was reminded by a panelist that the people in Jammu and Kashmir were locked up without any means of communication, perhaps not even aware of the biggest decision taken on their behalf. “At least they have have television,” he said in a rather dismissive tone. “They can watch the news though…”

BJP’s J&K pointsman, Ram Madhav, who was interviewed on the same channel by the same anchor, replied with a smile when he was told that even mainstream political leaders were locked up in Kashmir. “It’s a preventive measure. This is not happened for the first time,” he said with a grin on his face, as if New Delhi was doing some favour to the leaders by preventing them from venturing out. “This has happened many times in the past as well. Other governments have done it too.”

Also read: Weddings in the Time of Kashmir Lockdown

Another state BJP leader, the former deputy chief minister of the state, told a news channel with a straight face that Omar Abdullah and Mehbooba Mufti were not exactly detained but put in a “seven star accommodation”.

Another news channel correspondent, aboard a military helicopter, took propaganda to another level by showing some random aerial shots of Srinagar city which, according to him, proved that “everything was normal” in the Valley.

Perhaps the boldest attempt to paint the siege as ‘normal’ was made by National Security Advisor Ajit Doval himself, who drove to south Kashmir’s Shopian and Anantnag districts to “interact” and eat with locals on a street side. He explained to them how they will benefit from the reading down of Article 370. The videos of the whole exercise were released to the new channels, showing all is well even as millions of people in the Valley were besieged and continued to be restricted to their homes. The joke was on the state. The idea of “normalcy returns” couldn’t get more farcical.

From former prime minister and BJP leader Atal Bihari Vajpayee’s “sky is the limit” within the Indian constitution, the Sadbhavana doctrine of get them by their “hearts and minds”, and all the “Insaniyat kay dairay mein” Kashmir talk, the meaning of democracy, and the idea of India, has come full circle for Jammu and Kashmir under the rule of Modi 2.0.

The Centre has once again shown that New Delhi can only offer deceit and betrayal to the people of Kashmir – all in the name of democracy – even within the framework of the constitution. Those who put their faith in the idea of India, advocating it in Kashmir and defending it throughout their lives, today find themselves sidelined, humiliated, discredited – and arrested.

For the besieged, brutalised people of Kashmir, the idea of India has come to represent the stifling of their voices, the imprisonment of political activists, more deployment of forces, a military siege, pellet guns, constitutional deceit, institutional injustice and the denial of basic human and political rights.

In the future, any Kashmir-based mainstream politician or political party that tries to resell, repackage or advocate the idea of India in Kashmir, will have to first check its latest date of expiry – August 5, 2019.