It was expected that, given the controversial circumstances surrounding the 'encounter' in Srinagar, the least the government would do was return the bodies to the families. 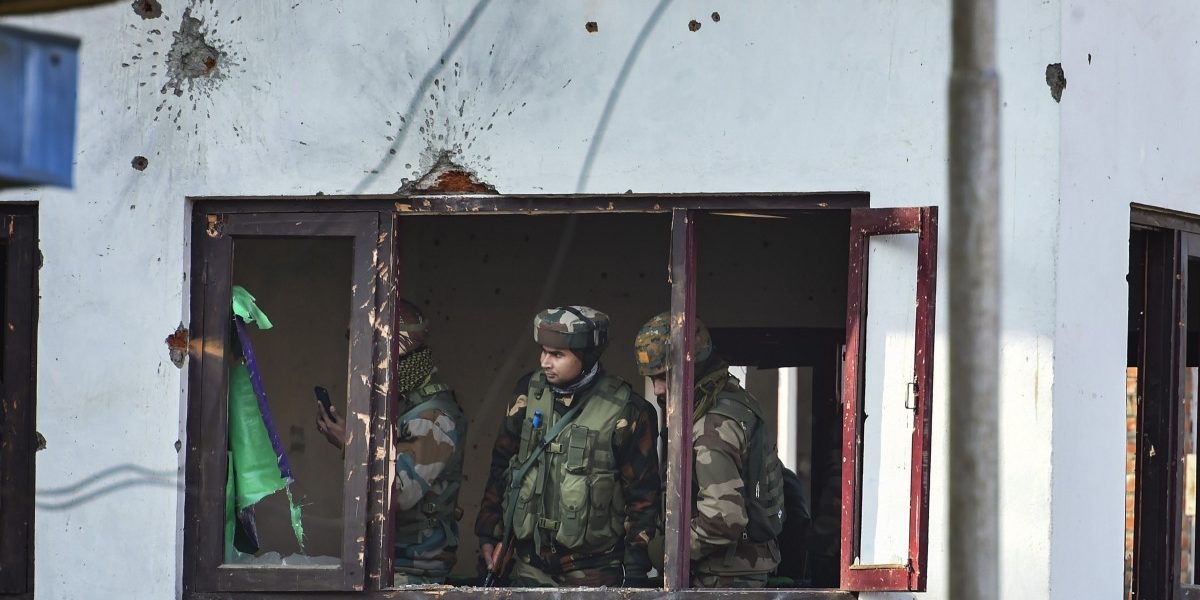 Army personnel conduct searches in the house after an alleged encounter at Lawaypora on the outskirts of Srinagar, Wednesday, Dec. 30, 2020. Photo: PTI/S. Irfan

Last week, #ReturnTheBodies – a demand for the return of bodies of the three youths killed in an encounter on the outskirts of Srinagar – was trending in Kashmir.

The hashtag drew attention to the government’s yearlong policy to not hand over the bodies of militants to their families. The three youths, whom the security forces claimed were militants while their families maintained they were innocent, are buried away in distant graveyards and only their immediate family members were allowed to attend their last rites.

The government’s rationale for this is twofold: first, to prevent a large gathering at funerals that can spread the novel coronavirus and second, as clarified by the Inspector General of Police for Kashmir in a recent interview to a national daily, to stop glamorising militancy amongst the youth.

The first reason lacks credibility as it has now been months since the situation in the Valley normalised. Not only are religious gatherings allowed, but there is also no bar on political activities. During the recently concluded District Development Council polls, several political parties organised large rallies; most of them were held by the BJP itself.

The second rationale also lacks punch given that there is no decrease in the recruitment of militants over the last year. The existing number of the active militants in Kashmir is by and large the same as that at the beginning of the last year, despite the killing of over 200 militants in 2020. Any depletion in the ranks of the militants has been replenished by fresh recruits. This has been the story of militancy in Kashmir over the past three decades – it has gone through its crests and troughs, but never been completely wiped out.

So, the government’s justification that denying bodies of alleged militants to their families somehow diminishes the appeal of militancy for the youth doesn’t hold water. Factors that drive young people to take up arms are too deep-rooted to be resolved simply by refusing permission for funerals. On the contrary, the practice is only aggravating anger against the state and reinforcing its image of being unjust and oppressive – something that has been a continuously inspiring young people to resist it by all means possible, including militancy.

Also read: ‘Now I Have Nothing’: Families of Kashmiri Men Killed in ‘Encounter’ Reject Army’s Claims

As the trending hashtag proves, denying the bodies to the families has brought together residents in the Valley in protest. It was perceived to be in contravention of the rules of engagement in a conflict area.

Lending the demand some urgency is the open grave dug by the father of Ather Mushtaq, one of the three slain youths, in his village. “This grave is for my beloved son. I will wait for his body till I die,” Mushtaq Ahmad Wani says in a video that has gone viral.

But the government has refused to budge. It has stopped short of ordering a probe, even though the families of the young men have called it a fake encounter. Lieutenant Governor Manoj Sinha has, however, offered an assurance that the government will address the questions surrounding the killing of the three youths at an “appropriate time“.

The Inspector General of Police, Kashmir Vijay Kumar has now told reporters that the police has “almost 60%” proved that the three youths were engaged in militancy and would soon be able to present data regarding the same to convince their parents.

The police had earlier admitted that the three youths were not on its list of active militants but did not rule out their involvement. According to the families of the three slain youths, they had left their homes on the very day they had been killed.

This is the second encounter to have raised tensions in the Valley in a year. Last July, three youngsters of Rajouri in southern Kashmir’s Shopian district were killed in an alleged encounter. However, the families of the three youths disputed this claim, and said those killed in the gunfight were innocent labourers.

Last month, the J&K police’s investigation disclosed that the three were killed by an army captain with the help of two locals believed to be army informers. In a rare development, the Army took the lead in indicting the serviceman responsible for the killings. In its charge sheet, the police have named an army captain and two others with murder and abduction of youths. The bodies of the three youths were later handed over to their families in Rajouri.

It was naturally expected that, given the controversial circumstances surrounding the encounter in Srinagar, the least that the government could have done was to return the bodies of the youths to the families. But the government seems in no mood to do so – that too when its rationale to withhold bodies has long outlived its purpose. Given the context, the government’s approach looks nothing short of vindictive.

Several of the policies it is implementing in Kashmir are not geared towards any desirable end. This is a government that measures its success by how much it is feared by people in the Valley. It thrives in an environment where it is hated, and its intentions are suspected. The more alienated the people are, the better the job done by the government.

So any move with a potential to generate even a little goodwill is an anathema to the authorities. A distraught father digging a grave for his slain son buried elsewhere and expecting his body to be returned will move no one in the administration. His grief is not a grievance to be addressed but an end sought for its usefulness: it serves as an example for the parents of the militants – despite the fact that the parents have no role and cannot be held responsible for the choices of their children. In the case of Wani, the security agencies have yet to credibly establish that his son was a militant.

But this doesn’t matter. It is in the nature of the current J&K administration to be immune to the need to respond empathetically to the grievances of the local population. There are no votes needed for its survival. And this state of affairs is unlikely to change anytime soon.

Till the time a government is allowed to be responsive to the people in the Valley, the very scheme of the established political representation in the former state may have been altered, one whose survival will again not be dependent on the goodwill of the local population. There are several projects currently underway to make this happen: the domicile law, new land rules and the delimitation commission, all geared to drastically detract from the political centrality of Kashmir Valley in ‘Naya Kashmir’.

Riyaz Wani is a Kashmir-based, award-winning freelance journalist. He has worked at The Indian Express for ten years, at Tehelka for seven years and at the leading regional paper Greater Kashmir, as its managing editor, until April 2019. He received the Ramnath Goenka award for his coverage of Kashmir in 2015.