'Now I Have Nothing': Families of Kashmiri Men Killed in 'Encounter' Reject Army's Claims

"How it is possible that he could have arranged for a weapon and reached Srinagar in such a short time?" asked the uncle of a youth who was killed in an encounter on Wednesday.

Mohammad Maqbool Ganaie, a head constable in J&K police, displays a picture of his son, Aijaz Ah, who was killed in an encounter, at his home in Pulwama district. Photo: Kaisar Andrabi

Pulwama, Kashmir: Forty-five-year-old Mohammad Maqbool lay unconscious on a bed inside his house in Pulwama district’s Putrigam village on Thursday. It was the very same bed on which his 22-year-old son, Aijaz had completed 35 days of rest, after developing back problems, on the advice of an orthopaedic.

Maqbool’s neighbourhood, which was nearly 37 km from Srinagar, was consumed by deafening wails. A grieving circle of family, relatives, and neighbours thronged the house’s lawn and even a makeshift tent was erected for visitors.

After 15 minutes of unrelenting efforts to resuscitate him, Maqbool opened his eyes. “Aijaz,” he murmured quietly. All the men present in the room burst into tears.

Aijaz Ahmad Ganaie, Maqbool’s eldest son, was killed along with two others in the early hours of Wednesday on the outskirts of Srinagar in a night-long encounter that the families claim was “staged”. Of the three youths killed, one was scheduled to appear for an exam on December 30.

On December 29, Ganaie, who had graduated last month, told his family that he had to collect some certificates from the Degree College Pulwama and left his home around 10:30 am.

“Come back as soon as possible. There is intense cold and it is not good for your health,” Ganaie’s mother reportedly said to him while bidding him goodbye.

Around 3:30 pm, his elder sister called Ganaie and asked him to come home, but he said that he would either reach home late or stay at a friend’s place. After another half an hour, his phone was switched off.

His father Maqbool, who is a head constable in the Jammu and Kashmir police and was posted in central Kashmir’s Ganderbal district, heard the news of an encounter in Srinagar’s Lawaypora area on WhatsApp. For Maqbool, news such as this was not out of the ordinary. Like his family back at home, he was not anxious.

The following day at 11 am, Maqbool received a call from the Station House Officer (SHO), Rajpora asking him his son’s whereabouts. “He asked me where my son was. I was surprised by his question. He then told me to send him his photograph. I asked him the reason, but he told me to just send the photograph across and ended the call,” recalled Maqbool.

With trembling hands, he sent Ganaie’s picture across to the officer. “Something is wrong with your son. You need to go to the Police Control Room Srinagar (PCR),” Maqbool’s colleagues said to him.

Maqbool was the first member of the three families of the three youths to reach the PCR, where, despite being a cop, he was not initially allowed inside. When, after multiple pleas, he was finally allowed in, he saw his son’s body lying on a stretcher. “He was lying naked where the three other dead bodies were present. He had bullet marks on his chest and abdomen. My eyes couldn’t believe that it was my son, who spoke to me just last morning,” Maqbool told The Wire amidst tears.

Sitting in a large tent inside their one-storey building, 43-year-old Mushtaq Wani, the father of slain Athar Mushtaq recollected the memories of his son’s last day.

Like Ganaie, Athar was at home until 1:30 pm and the two were in Pulwama between 2 and 3 pm, according to their families.

Sixteen-year-old Athar, Mushtaq’s only son, had everything a young boy of his age desired: an iPhone, car and supportive parents for whom he was the world.

“Now I have nothing,” Wani said. “My soul has been torn into two halves – one lies with my son’s grave in Sonamarg.”

Athar was also one of the three youths that the army claimed were militants and killed on December 30. He has been buried in Sonamarg, 110 km away from his hometown.

“At around 3 pm he called a family member and told her not to worry as he was going to get late,” Wani, who was draped in black pheran, said. The last time his family saw him was around lunchtime. After lunch he went to Pulwama for some work related to his studies, his father told The Wire.

Also read: Police Officer Shot Dead in Anantnag Was the Sole Breadwinner for a Family of 8

Twenty-five kilometres away from Wani’s home is 22-year-old Zubair Ahmad’s house, the third man killed in the encounter.

Ahmad, a mason by profession, was the younger brother of two working policemen posted in Ganderbal and Budgam respectively.

Abdul Khalid, Ahmad’s uncle, told The Wire that Ahmad would usually remain busy with his work and that he didn’t know the families of the youths who were killed along with Ahmad.

How could Ahmad arrange weapons in just an hour and reach Srinagar in that short period of time, questioned Khalid. According to his family, Ahmad was in Shopian district till 3 pm, while the encounter started around 5:30 pm. “How it is possible that he could have arranged for a weapon and reached Srinagar in such a short time?” asked Khalid.

All the families of the three youths killed in the encounter have rejected the police’s claim that they were militants. Notably, none among the youths had any police case filed against them.

Like Ganaie and Ahmad’s family, Athar’s father Wani speculated that there was a possibility that the trio was interrogated and later killed in a “fake encounter”. Their allegations came forward after General Officer Commanding (GoC) Kilo Force. H.S. Sahi, in a press briefing, said that the operation was launched on the evening of December 29 after receiving inputs that militants were inside a house close to the national highway. 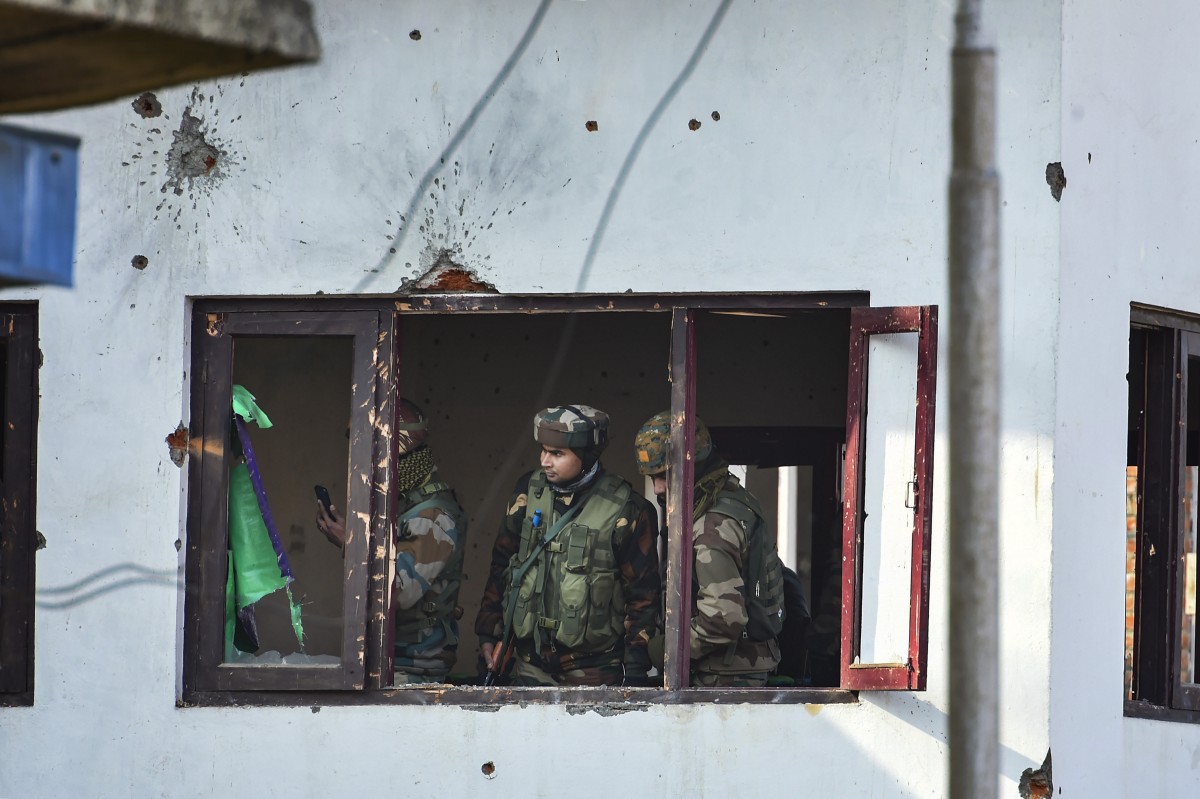 Army personnel conduct searches in the house after the encounter at Lawaypora on the outskirts of Srinagar, Wednesday, Dec. 30, 2020. Photo: PTI/S. Irfan

“They were asked to surrender, however, they responded with firing and the operation was suspended for the night and resumed in the morning after they refused to surrender,” Sahi said.

Many young men in the Bellow village told The Wire that the army maintained records like the phone numbers of young boys and called them whenever they wanted to interrogate them about anything. That way, the young men said in response to a statement by the police, it was easy for the army to know a person’s record.

The Jammu and Kashmir Police in their statement said that the parents usually didn’t have any knowledge about their wards’ activities. The police claimed that Athar, whose cousin Rayees Kachroo was also a militant killed in 2017, was a hardened militant.

The families of the three youths, in shock and despair over the killings, have a slew of questions on their minds but are reluctant to believe and accept the police’s version that their sons were part of any militant activity.

The families’ allegations come days after the J&K police filed a charge sheet against an army officer and his two local informants in connection with the deaths of three youths killed in an encounter in July.

In Kashmir, the families of hundreds of persons, who have been killed in fake encounters, are still awaiting justices. Most of the incidents had been reported during the first armed insurgency of Kashmir in the 1990s.

Day of the ‘encounter’

Like Maqbool, Athar and Ahmad’s family also received similar calls from the SHO, inquiring about the whereabouts of their sons and were asked to share photographs of the youths.

“At around 12:30 pm, I got a call from the SHO who told me to send Athar’s picture across on Whatsapp,” Wani said and added that the SHO later told him to reach the Police Control Room in Srinagar immediately.

Wani, who was in Srinagar for work at the time of the call, reached the PCR after some time where he saw a large number of people outside protesting and mourning in response to the killings. Wani’s family was also present there. When he spotted his son on a stretcher, dead, Wani lost his consciousness.

All the families have protested and alleged that the government forces killed their sons in “fake encounters”. “We weren’t called before by the police or the army to request that my son surrender as they claim they usually do,” Wani said between tears.

Maqbool and Ahmad’s family also said that the J&K police did not inform them and asking them to implore the youths to surrender, if the three were militants, as per the police and army have claimed.

Meanwhile, after the families’ allegations, J&K’s Director General of Police (DGP) Dilbagh Singh on Thursday said that he had no reason to dispute the army statement, but added that police would “still investigate the claims made by families of the killed trio”. 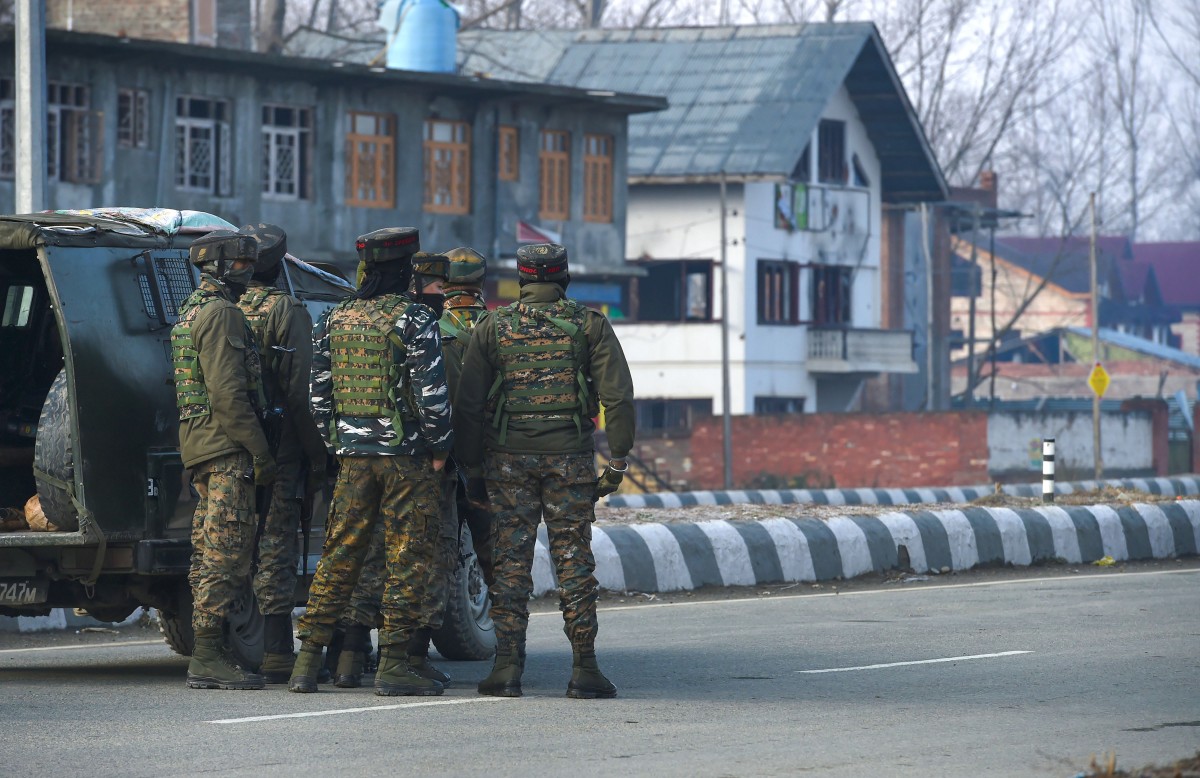 Military personnel stand near the site of the encounter at Lawaypora on the outskirts of Srinagar, Wednesday, Dec. 30, 2020. Photo: PTI/S. Irfan

Funeral in a ‘mobile torch’

At around 4 pm, after identifying the bodies of their sons, the families were also refused permission to take the bodies home for burial. Instead, authorities took their corpses to the remote Sonmarg area in North Kashmir and lowered them into graves that remain under army surveillance.

“Only a father knows what gets buried in a heart when his son gets buried elsewhere away from home,” Wani lamented.

Speaking to The Wire, Wani said that his family were following the police vehicle in which the bodies were taken to Sonmarg but they were not allowed past the third checkpoint near Gund, a village in Ganderbal.

“I pleaded with the policemen there to allow us to perform the last rites of our son but they didn’t budge,” Wani said. In desperation to catch one more glimpse of his only son, Wani, along with his wife, started out on foot for the destination which was 30 kilometres away from the checkpoint.

After they walked for nearly 4 kilometres, their car, which had been stopped at the checkpoint, was allowed to proceed after multiple pleas from other relatives. The duo then boarded the car and reached the spot.

The funeral was attended by nearly 30 men including some locals on the road and later, only a few family members were allowed to bury them. “Their graves were dug with bulldozers, not as per the rituals and later, after placing them inside the graves, we filled the graves with soil with our with hands,” Wani said. “It was already dark and we were doing this with mobile torches as they did not allow us to have any light installed there,” he said.

Incidentally, Ahmad’s brother, a policeman, who had buried many militants at the government-designated graveyard in Sonamarg this year, laid his younger brother to rest in the same graveyard.

Today, on January 1, Srinagar’s markets have remained shut as a mark of protest against the killing of the three ‘militants’.

Meanwhile, a complete shutdown on the second day is being observed in Pulwama and Shopian while mobile internet services were barred in both the districts after the incident.

Kaisar Andrabi is an independent journalist from Kashmir and tweets at @KAndrabi. Quratulain Rehbar is a Kashmir-based freelance journalist.