Srinagar's senior superintendent of police denied the allegations levelled against the government forces by the residents.

The site of the encounter in downtown Srinagar. Photo: Junaid Kathju

Srinagar: It was 2:30 am and Mukhtar Ahmad, 35, was preparing for a sehri (a meal eaten before sunrise by Muslims during Ramadan) when he suddenly heard a big thud outside his house.

Anxious to know the nature of the noise, Mukhtar peeped out of his window and saw a large contingent of government forces in the narrow lane leading to his house.

Surprised by the presence of such a huge force, he immediately came downstairs to inform his family about the situation outside.

“As we were still trying to figure out what was going on, we heard a knock at the front gate. The forces told us to come out,” Mukhtar, a shopkeeper, recalled.

The government forces had information about the presence of militants in the locality. Two Hizbul Mujahideen militants, one of whom was Junaid Ashraf Khan ‘Sehrai’, whose father is the chairman of the separatist conglomerate Tehreek-e-Hurriyat (also known as the All Parties Hurriyat Conference), were killed on Tuesday morning after a 15-hour-long gun battle with forces in a densely populated area in downtown Srinagar.

Mukhtar and his family of five, including his mother, father, brother, sister-in-law, and a nephew, politely followed the orders. While the forces allowed the rest of the family to move away from the encounter site, Mukhtar and his nephew were held back. After forces cordoned off the area, Mukhtar, along with his nephew, was asked to film the insides of houses where militants were suspected to be hiding with their camera phone.

“They beat us and told us to go inside and make a video. We were used as human shields,” Mukhtar alleged.

Forced to enter the houses, the two of them resorted to calling out in Kashmiri to ask if anyone was inside.

“When we went back after making a video, and showed it to the forces, they beat us stating that we are actually helping the militants to escape by making them aware of the forces’ positions in the native language,” he said.

Mukhtar said it was after making at least four to five rounds that he and his nephew were released. 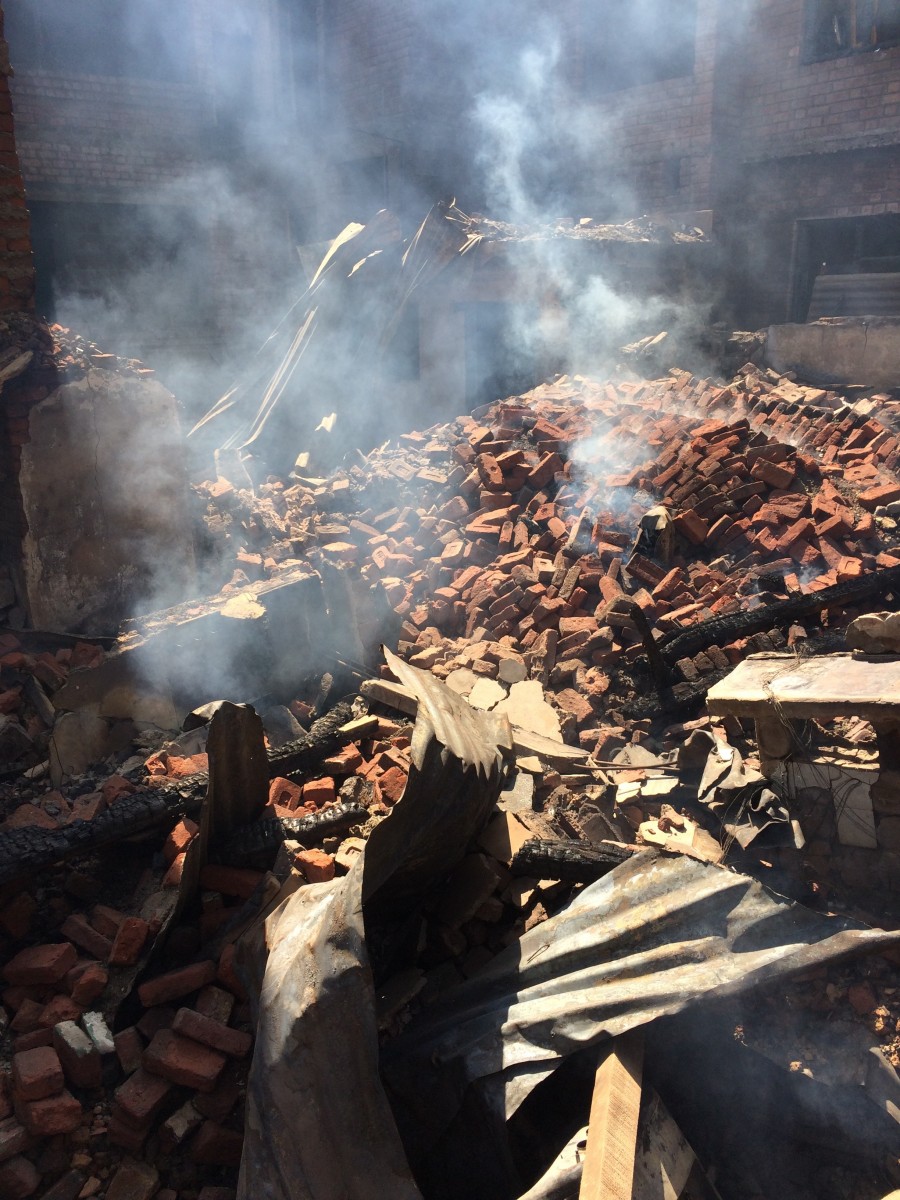 The site of the encounter in downtown Srinagar. Photo: Junaid Kathju

“I was carrying Rs 63,000 cash in my pocket, which I had picked up from home when we were asked to evacuate it, but they took that too from me,” Mukhtar alleged.

Many other residents, several of whose houses were burned, claimed that the police looted cash, jewellery, and other valuables from their homes as they carried out the operation to eliminate militants in the area.

On Wednesday, curls of smoke were still emanating from the debris. A large number of people across the city have visited the place to witness the scale of the destruction.

Nazir Ahmad Darzi, 47, and his son Mohammed Ibrahim Darzi, 15, also claimed to have been used as human shields during the operation.

“We were inside our homes and were asked to come out. The moment we came out, the forces grabbed my neck and started beating me,” Ibrahim said. 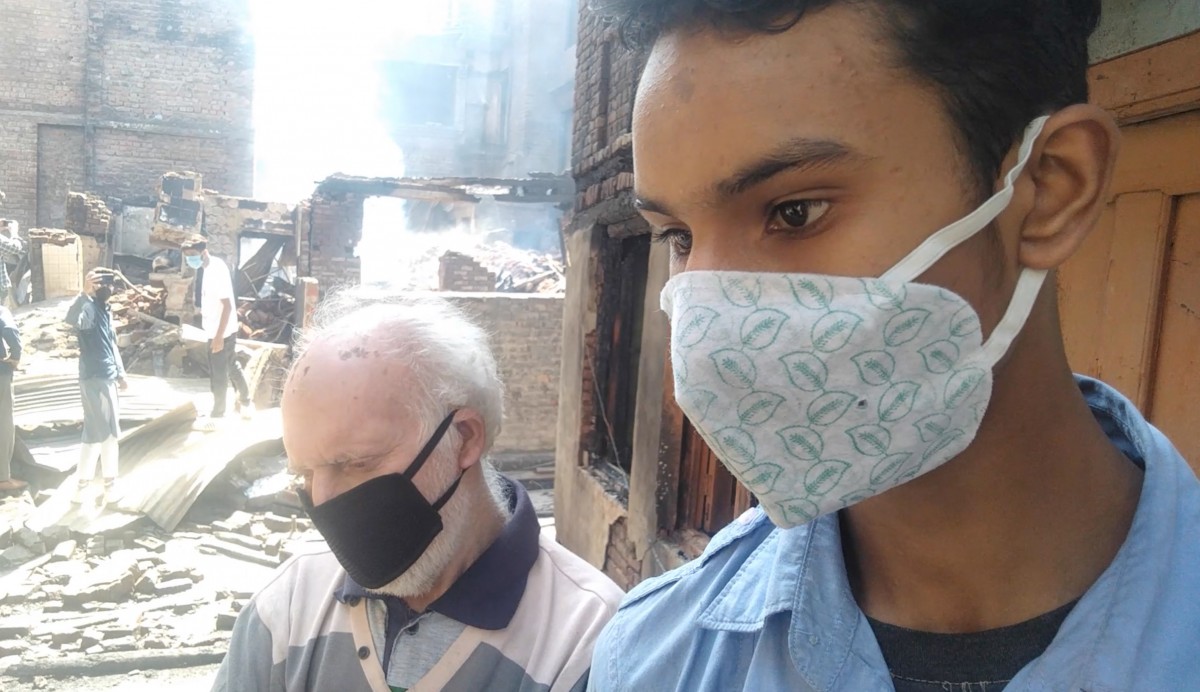 Forty-seven-year-old Nazir Ahmad Darzi claimed he and his 15-year-old son were used as human shields during the operation. Photo: Junaid Kathju

Like others who had already been assembled near the encounter site, he too was asked to go inside the suspected houses and film them.

“I made two rounds inside the houses. On both occasions, when I came back with a video, the forces were forcing me to give them the location of the militants,” Ibrahim said. “I told them that I don’t know, to which they [forces] replied that if they do not find the militants, we will be targeted instead.”

Ibrahim’s father also narrated the same story. “I was ready to die but was scared for my son. I can never forget those hours,” Nazir Ahmad said. “I was begging the forces to allow me to go inside the houses alone, to just spare my son.”

Both the Darzis’ and Mukhtar’s houses were burned down in the encounter. The families alleged that all their belongings, too, were looted.

“When we came back to our houses around 3 pm, after the forces left, there was nothing left. All our belongings were gone,” Nazir said.

Just three houses away from Mukhtar’s and Darzi’s house, Afrooza, 42, was reciting the Quran in her room as it was one of the five nights of Laylat-al-Qadr (the Night of Power), in which the Quran was first revealed to the Prophet Muhammad (PBUH) by Allah.

Immersed in her prayers, Afrooza heard a knock at the front gate of her house. Initially, she thought it might be the neighbours looking for something.

“Open the door. We are from the police station,” were the words Afrooza recalled as she rushed to her husband Fayaz Ahmad Gandroo, who was sleeping in the next room.

Fayaz, a tailor by profession, opened the door without wasting any time. The family was asked to evacuate the house but not before taking Fayaz with them. “I asked them (forces) where they are taking my husband. But they said he will be back soon,” Afrooza said. The family alleges that Fayaz was used as a human shield in a search operation.

The house was now taken over by the forces as a vantage point to hunt down the militants that, as per their intelligence, were hiding in the neighbourhood. Fayaz was allowed to leave as soon as the encounter began.

“I had Rs 30,000  and some jewelry in a wardrobe. Everything is gone,” Afrooza alleges.

Afrooza too lost her house in the fire. The family alleges that as the forces were preparing to leave, they set the house on fire and looted all their precious belongings.

“I am left with nothing. My husband is a tailor and stitches leather jackets. Where will we go now? I have two children,” she said. 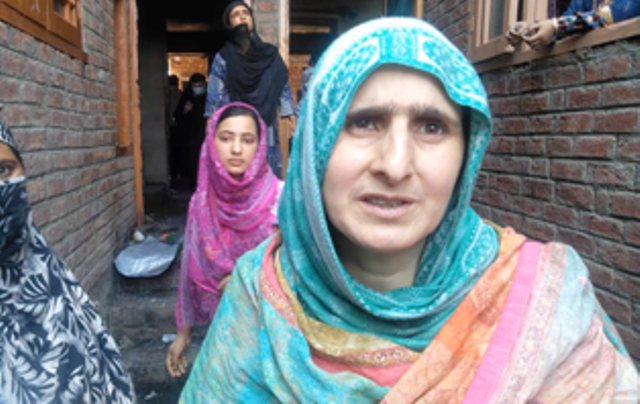 Afrooza’s house has been lost to the fire. Photo: Junaid Kathju

22 houses gutted in the fire

As per the Mohalla Committee, 22 houses were gutted in the fire.

Abdul Rehman Dar, the president of the Mohalla Committee, said the 22 houses sheltered around a 100 people, “who now have nowhere to go”.

“All their belongings were lost in the fire. The only thing they are left with is the clothes they were wearing at the time of the encounter,” Dar said.

To help the affected families, the committee is now raising funds on a local level, and have also opened a bank account for donations to rebuild the houses.

“We don’t need any help from the government. We (Kashmiris) are sufficient enough to help out our brethren. We will rise again, by Allah’s willing,” Dar said. 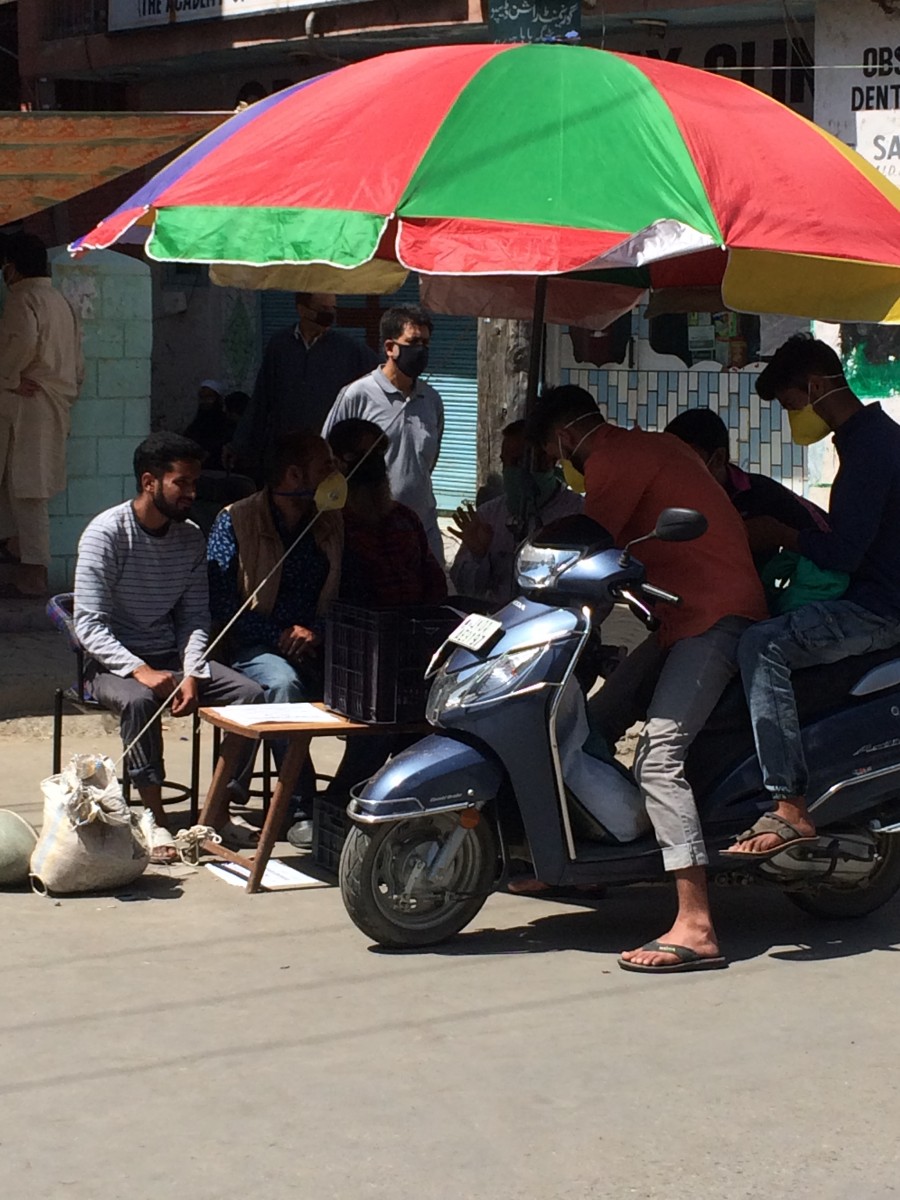 An official from the Fire and Service departments said that, as per their preliminary investigation, they have counted 17 houses that were either fully or partially burned during the encounter.

Senior Superintendent of Police (SSP), Srinagar, Haseeb Mughal denied the allegations levelled against the government forces by the residents.

“The allegation of looting is rubbish and baseless. It is being levelled to malign the image of the forces,” Mughal said. “Similarly, nobody was taken as human shield. The residents were asked to accompany the forces to only check their own houses.”

Mughal said those who have lost their jewellery and cash should file a police complaint regarding the same. The SSP also said that compensation would be paid for those houses that got burned as per government norms.

“Apart from two to three houses from which the militants were firing, all other houses which caught the fire, resulting in collateral damage, will be provided relief,” he said.

Junaid Kathju is a Srinagar-based journalist.