'Pomp and Show to Sell Normalcy': Envoys' Visit Fails to Give Hope to Kashmiris

"The government should focus on really bringing the normalcy, rather than trying to manufacture one." 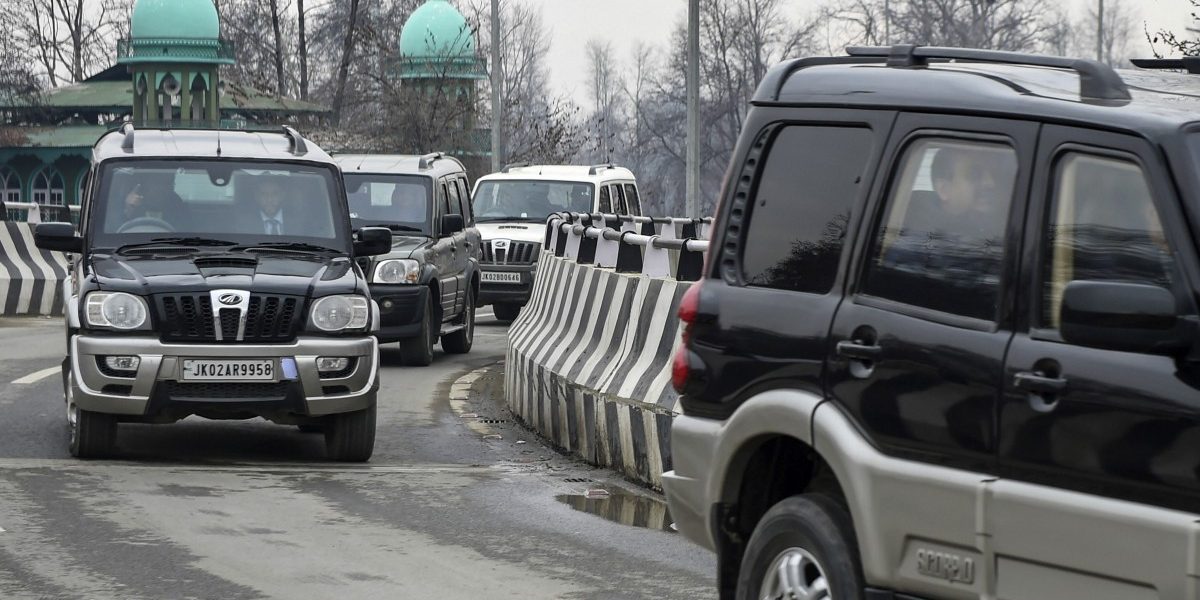 The cavalcade ferrying the envoys in Srinagar on January 9. 202. Photo: PTI/S.Irfan

Srinagar: On Thursday, envoys from 15 countries visited Jammu and Kashmir at the government’s invitation to see the situation in the Valley six months after scrapping of Article 370 in August. Shops were open and traffic was running, but people were hardly aware about the arrival of the delegation that had only been announced two days before.

For people who have been living amid an internet shutdown and strained economic conditions – businesses in Kashmir have suffered a whopping loss of Rs 17,000 crore in five months, according to a report by the local traders body – this visit did little to spark hope.

Aijaz Ahmad, the 50-year-old manager of a handicraft shop near Polo View in Lal Chowk, the main commercial hub, said he had heard about delegates coming to Kashmir on the television two days ago.

However, Ahmad said he has little hope when it comes to the delegation. “Nothing will happen. The government does what it wants to do they do not care about people. There is nothing good for common Kashmiri people in these delegations,” he said.

When 24-year-old Suhail Dar, an auto-driver from Kashmir, heard from a passenger that the delegates were visiting Kashmir, he said that it didn’t remotely excite him. Dar said that delegates coming to Kashmir want to enjoy the beauty and not listen to people’s grievances.

“Thousands of people, including children are behind bars, what have they come for? And whom they are meeting? They are meeting selected people from government, they always do,” Dar said. “They will see and hear only what government wants them to. A common Kashmiri has no voice.”

Kashmir Chambers of Commerce and Industries (KCCI) president Shiekh Ashiq told The Wire that he had no idea about the delegation. “Being an apex organisation, we are usually invited. But we weren’t,” he said.

According to sources, top government officials in the region had invited a select number of people to meet the visiting envoys at a luxury hotel at Gupkar Road. Among those to speak to the delegation were various politicians, civil society members and journalists.

A view outside the hotel on banks of Dal Lake where the envoys held meeting with politicians, journalists and members of civil society. Photo: The Wire

A senior journalist, who was the part of the delegation, told The Wire said that they raised the issue of continuous internet ban in the region. “Also, we put a point that the political government should be given priority rather than bureaucratic government that is in place currently.”

In October, several far-right members of European Union had visited Jammu and Kashmir three months after the government scrapped the special status of the state granted under Article 370 of the constitution and bifurcated it into two union territories. The visit was lambasted by India’s opposition and the Labor Party in the UK as the Indian authorities had prevented many people from visiting Valley, including a senator from the US. The delegates then had lunch with the army at its largest cantonment in Srinagar and an evening boat ride at Dal Lake.

In Kashmir, while the traffic has been picking up and shops and businesses are are attempting to limp back to some sort of normalcy, the internet shutdown continues to be lodged in place. Three former chief ministers, including Farooq Abdullah who is a sitting parliamentarian, continue to be under detention.

Also read: Envoy’s Programme Was Drawn up Based on Threat Perception: MEA

Iltija Mufti, the 33-year-old daughter of former chief minister Mehbooba Mufti, lambasted the visit of the envoys and told the The Wire that “it is nothing but political machinations and manipulations by the central government”.

“If they had any guts and integrity they would have arranged for these diplomats to meet former three chief ministers of the Valley. What they are trying to hide?  The government ought to hang its head in shame for repeated self goals and one faux pax after the other as far as Kashmir is concerned,” she said.

She added that if diplomats from all over world visit Kashmir to show how “normal” the situation is, then how come government of India doesn’t release all detainees and restore internet.

Shameem Ahmad, who is a vendor in Jahangir Chowk, called the visit “pomp and show to sell normalcy in Kashmir”.

“If the government is trying to portray that everything is normal here, why don’t they resume internet services and release those who have been detained?” he said. “The government should focus on really bringing the normalcy, rather than trying to manufacture one.”