In Srinagar, a Mother Begs So She Can Meet Her Son Detained in Agra

Zamrooda's son has been languishing in jail for the past eight months, after he was picked up during a midnight raid in August last year.

Zamrooda, the mother of Srinagar youth Asif Ahmad, who has been detained at a jail in Agra, under Public Safety Act since August 2019. Photo: Mudasir Ahmad

Srinagar: Abject poverty and yearning to meet her son who has been held under the stringent Public Safety Act (PSA) in Agra Central Jail has pushed Zamrooda, a resident of Srinagar, to the point of begging.

Her son, Asif Ahmad, was declared a “potential threat to peace” by the Jammu and Kashmir Police and picked up during a midnight raid at his residence in August last year, days after New Delhi scrapped the state’s special status. Along with dozens of youngsters from Kashmiri, he has been languishing in the jail, more than 1,500 km away from home.

His family lives in the congested Batamaloo locality in Srinagar and cannot afford to travel to visit him.

In January, 44-year-old Zamrooda approached the Jammu and Kashmir prison authorities seeking permission to meet her 22-year-old son. The visit was cleared on February 3, after Srinagar’s Central Jail authorities wrote to the superintendent of the Central Jail Agra.

A few days later, as the family was discussing the travel expenses involved in visiting Ahmad, a man from another locality in Srinagar, who had gone to meet his detained son in Agra, knocked on their door with a message for Zamrooda from her younger son. 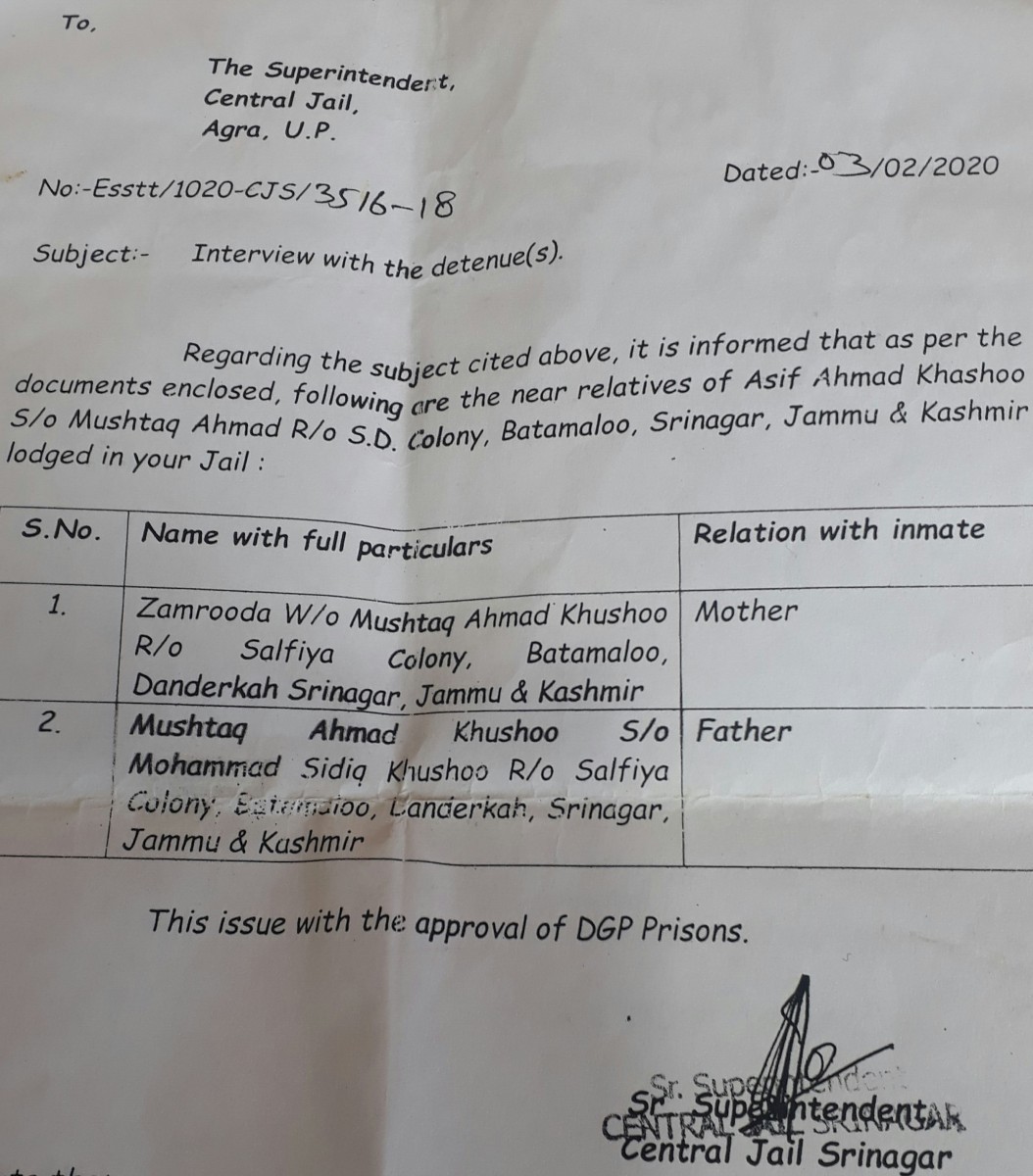 “Asif told me to convey to you, ‘I’m craving to see you. Tell my mother to visit me’,” he told the family.

The words left Zamrooda restless. With no option in sight, she finally started begging. “My heart pains and yearns to see my son. I’m left with no option, but to beg for monetary help to visit him,” she said, at her residence.

For several days now, she leaves her home in the morning after finishing her chores and visits government offices, public places and localities in Srinagar to seek financial help.

“Since the day I got the message from my son, I haven’t slept at all. I wake up in the middle of the night and start crying. Sometimes, I feel choked. Only a mother can understand the pain I’m going through,” said Zamrooda, breaking down.

For the past few days, both Zamrooda and her husband, Mushtaq Ahmad Khushoo, have been planning to visit their son by the end of March. They would require at least Rs 15,000 for travel expenses, Zamrooda said. “We are still short of some money.”

Zamrooda has a wish list, too. She wants to buy some clothes for her son and give him some pocket money, as she fears he may not be freed anytime soon.

“I came to know that it is very hot these days in Agra. I wanted to buy Asif a pair of cotton shirts and get him some fruits as well. But I don’t have enough money yet,” she said.

Her husband is a labourer by profession and their elder son is a street vendor. “There is no work in Kashmir these days. We hardly earn enough to make a living,” he said, while at his residence.

According to Ahmad’s lawyer, Wajid Muhammad, who is pleading his case in the J&K high court, the young man was arrested for his alleged involvement in pelting stones on forces, in a case dating back to June 2016.

“The police scaled the boundary wall of our house and banged the main door. Then, they asked for Asif and took him away without listening to us,” said Zamrooda. 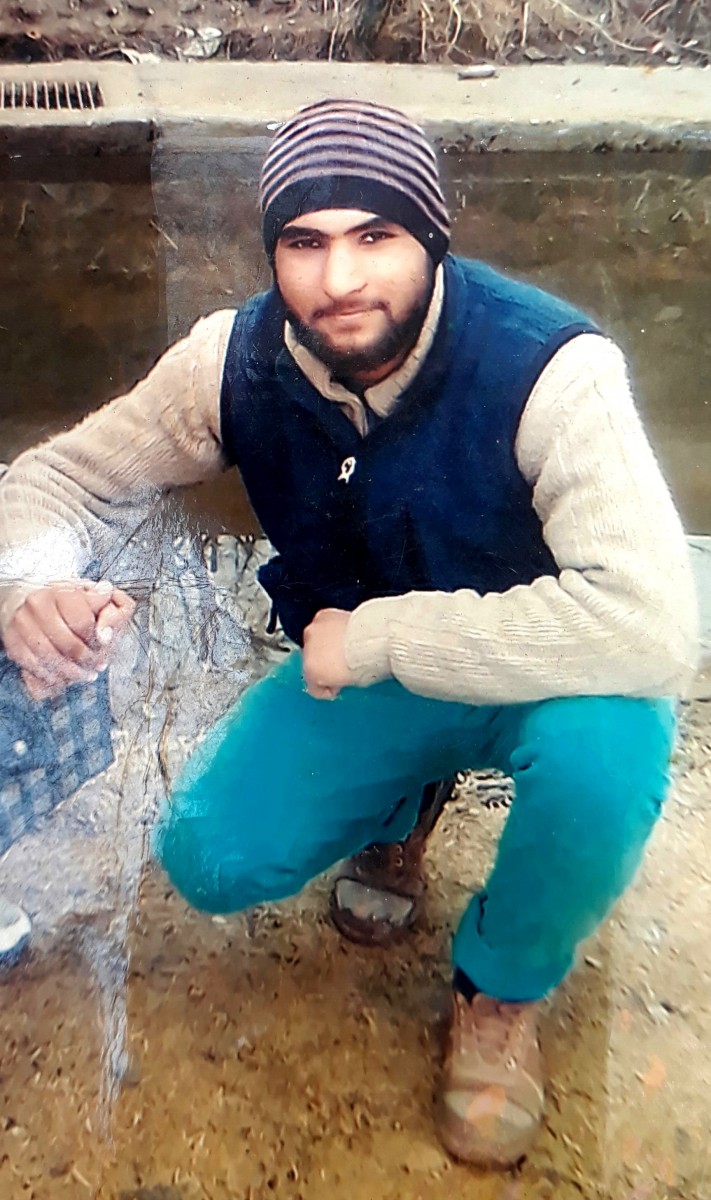 Asif Ahmad has been under detention at a jail in Agra since August 2019. Photo: Mudasir Ahmad

The next day, he was flown to the Agra jail. The PSA, described by Amnesty International as “lawless law”, allows the government to detain a person without trial for up to two years.

This is, however, not the first time Asif, a class eight dropout, has been arrested. In 2018, the family said, he was booked under the PSA and detained at Srinagar’s Central Jail for eight months.

He has been in arrested “several times” since the summer of 2016 when Kashmir erupted into violence in response to the killing of militant commander Burhan Wani.

“I won’t lie. He participated in protests that year. But who didn’t? The entire Kashmir was on the roads. He was detained at a local police station for a month and later he was again held for another month at a different police station,” said Zamrooda.

But, the young man, also a vendor, had “learned his lessons” and would stay away from “everything,” the family said.  “Police, however, didn’t stop harassing him. Every time there was a protest or some other issue in Batamaloo, they would arrest my son for no fault of his,” said Zamrooda.

A report by two human right groups – J&K Coalition of Civil Society and Association of Parents of Disappeared Persons – earlier this year said at least 412 persons, including youths, lawyers and businessmen were booked under the controversial PSA after August 5.

Most of those arrested are still languishing in different jails in UP. “My son’s case is in the high court, but there has been no progress all these months,” said Zamrooda. “If only the government can bring him back to Srinagar jail, it will at least allow us to visit him occasionally.”