Collating information from people’s testimonials, their report noted that “boys as young as 14 or 15 are taken away, tortured, some for as long as 45 days."

Security forces in patrol during the shutdown in Srinagar. Photo: PTI/S. Irfan

New Delhi: Tehmina*, a resident of Anantnag town of Jammu and Kashmir, recently told her husband Abdul Haleem*, “Let us have another child.”

The thought had stemmed from the uncertainty and fear surrounding the people of her state ever since the Centre imposed a lockdown on August 5. “If our Faiz gets killed, at least we will have one more to call our own,” she told Haleem.

Such stories of common people from across Srinagar, Shopian, Pulwama and Bandipora districts fill the report put together by the five women — Annie Raja, Kawaljit Kaur, Pankhuri Zaheer from National Federation Indian Women, Poonam Kaushik from Pragatisheel Mahila Sangathan and Syeda Hameed from Muslim Women’s Forum – after their visit to the state.

From September 17-21, the team went to hospitals, schools, homes, market places, and spoke to people in the rural as well as urban areas – to men, women, youth and children.

They said the report “is our chashmdeed gawahi (eye-witness account) of ordinary people who have lived for 43 days under an iron siege. Shops closed, hotels closed, schools, colleges, institutes and universities closed, streets deserted was the first visual impact as we drove out from the airport. To us it seemed a punitive mahaul that blocked breathing freely.”

Among other issues, the report said that across the four districts, residents spoke of “lights, which had to be turned off around 8 pm after Maghreb prayers.” 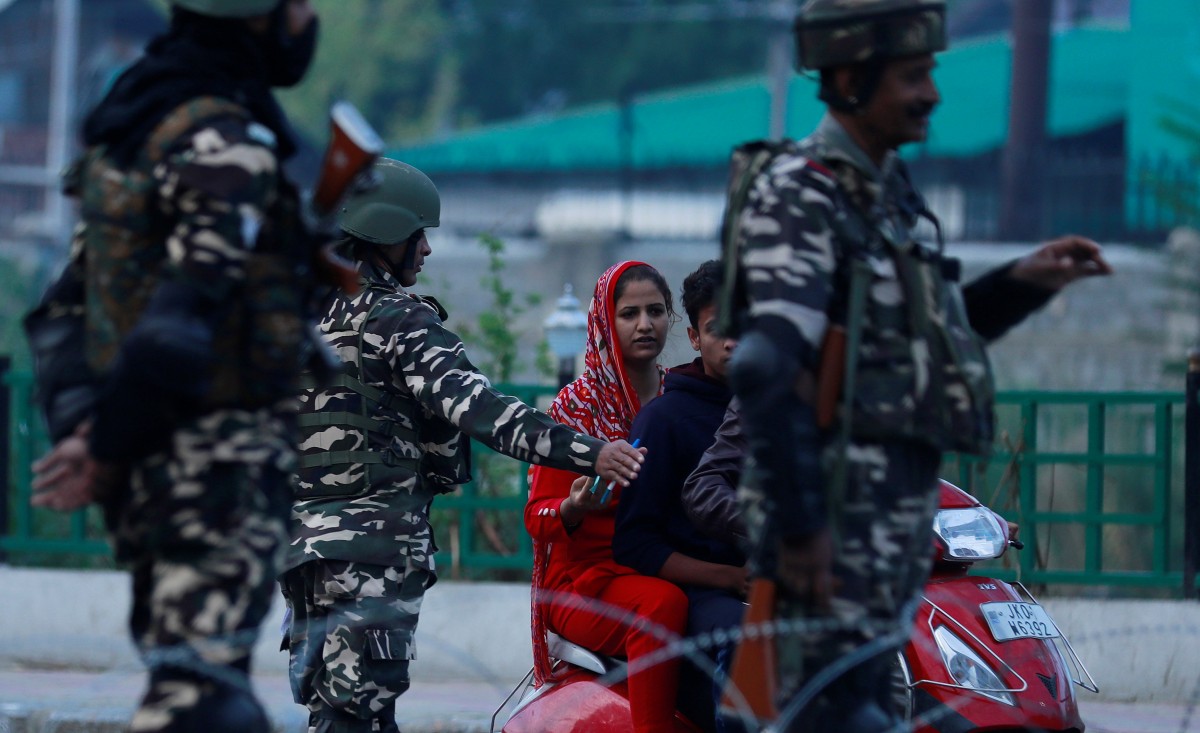 Security personnel stop Kashmiri residents as they stand guard on a deserted road during restrictions after scrapping of the special constitutional status for Kashmir by the government, in Srinagar, August 23, 2019. Photo: Reuters/Danish Ismail

“In Bandipora, we saw a young girl who made the mistake of keeping a lamp lit to read for her exam on the chance that her school may open soon. Army men, angered by this breach of ‘curfew,’ jumped the wall to barge in. Father and son, the only males in the house, were taken away for questioning. ‘What questions?’, no one dared ask. The two have been detained since then.”

It quoted one Zarina* from a village in Bandipora district as saying, “We insist that men should be indoors after 6 pm. Man or boy seen after dusk is a huge risk. If absolutely necessary, we women go outside”.

Collating information from people’s testimonials, the report noted that “boys as young as 14 or 15 are taken away, tortured, some for as long as 45 days. Their papers are taken away, families not informed. Old FIRs are not closed. Phones are snatched; collect it from the army camp they are told. No one in his senses ever went back, even for a slightly expensive phone.”

“A woman recounted how they came for her 22-year-old son. But since his hand was in a plaster, they took away her 14-year-old instead. In another village, we heard that two men were brutally beaten. No reason. One returned, after 20 days, broken in body and spirit. The other is still in custody. One estimate given to us was 13,000 boys lifted during this lockdown.”

Many spoke of visiting the nearest camps of the security forces looking for their family members. There, the names of those arrested had been put up on boards, announcing in which jails outside of the state they had been despatched to.

There were also accounts of people complaining of the inability to respond to health emergencies, to inform family members about the death of dear ones.

Also read | Amid Communication Blockade, Kashmiris Robbed of the Right to Mourn Their Dead

The report further quoted villagers as saying, “They (security forces) don’t even spare our rations. During random checking of houses which occurs at all odd hours of the night, the army persons come in and throw out the family. A young man working as SPO told us. ‘We keep a sizeable amount of rice, pulses, edible oil in reserve. Kerosene is mixed in the ration bins, sometimes that, sometimes koyla (coal)’”.

The all-women team wrote that wherever they went, they were met with two “inexorable sentiments.” First desire for azadi (freedom). They want nothing of either India or Pakistan….Abrogation of Article 370, some say, has snapped the last tie they had with India. The second (sentiment) was the mothers’ anguished cries asking for (an) immediate stop to this brutalisation of innocents.”

Among other demands, the team has sought restoration of Articles 370 and 35A, constitution of a time-bound inquiry committee to look into the excesses committed by the army, removal of army personnel from the civilian areas, restoration of communication lines and initiating a dialogue with the people of about the political future of their state.