Other than the government and the groups supporting it, no other social and political institution survives in Kashmir. 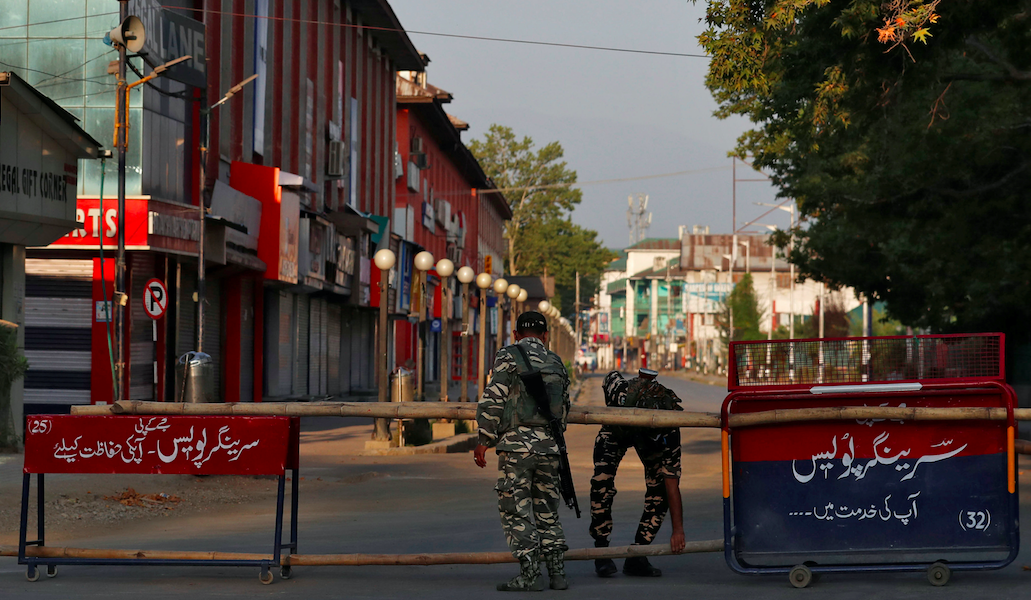 Indian Central Reserve Police Force (CRPF) officers put up a roadblock on an empty street during a lockdown on the first anniversary of the revocation of Kashmir's autonomy, in Srinagar August 5, 2020. Photo: Reuters/Danish Ismail

In the 1940s, Kashmir’s then most popular leader Sheikh Mohammad Abdullah set out his vision of a modern Kashmir in a revolutionary manifesto. It advocated equal rights regardless of nationality, religion, race or birth, as well as freedom of conscience and worship, freedom of speech and of the press. It also affirmed that “women citizens shall be accorded equal rights with men in all fields of national life”.

The manifesto’s economic plan was more radical, envisaging agrarian and land reform and land redistribution that involved transfer of excess land from the feudal landlords to the peasants and tenants. Once Sheikh took power in 1947 as the first prime minister of an autonomous Kashmir within the Indian Union, he immediately implemented the plan, in one stroke ameliorating the economic lot of rural Kashmir.

This document was called ‘Naya Kashmir’ or ‘new’ Kashmir.

Seventy two years on, a week after India scrapped Article 370 that guaranteed Kashmir’s autonomy, Prime Minister Narendra Modi in a speech to the nation said the move would usher in development and prosperity to the state. He assured that the state’s  merger into India would aid the Union government’s plans to end corruption, atrocities and violence and make way for industries, private investments and employment.

He also labelled his development agenda for the region ‘Naya Kashmir.’

Between these two ‘Naya Kashmir’ pledges is a lot of history that begins with partition of British India into India and Pakistan and the conflict between the two newly formed nations over Kashmir, a state which they control in part but claim in full.

In fact, there are two historical trajectories that have resulted from this. One, the dispute between India and Pakistan, that has led to three wars and countless skirmishes between the two countries. And another, the lingering struggle to fulfil the political aspirations of Kashmiris. This struggle has led to the loss of more than 70,000 lives over the past three decades.

Over the years, the two aspects have come to be known as external and internal dimensions of the conflict. The dimensions have run side by side in the region, spawning their respective politics, spheres of influence and discourses. That was until New Delhi unilaterally read down the Article 370 on August 5 last year. This, in one stroke, integrated Kashmir into India in defiance of the whole point of the decade-long festering conflict over the region. What’s more, India went ahead and split the state into two federally administered areas, J&K and Ladakh, which began to be called Union Territories (UTs).

India’s far-reaching move has attempted to undo the history and politics of the past seven decades in the region. The game plan, as it has unfolded so far, is to unmake the old order and spin a new one in its place

Kashmir that existed before August 5 and after that are thus two distinct realities. And this difference is not just the one between the old autonomous state and the integrated federally administered area of India that the state has become now. It is the complete political, social and even cultural makeover that is being attempted.

And to some extent, New Delhi may have succeeded in accomplishing this. Parties like the National Conference and the People’s Democratic Party, and also smaller ones, like the People’s Conference and Awami Itihad Party, not to talk about the separatist groups, have receded into the background. In the past 12 months, none of them have been able to organise any political activity.

Ditto for civil society. No pre-August 5 civil society group is active on the scene. They have been bullied into silence following the arrest of their leaders, many of whom have since been released.

Similarly, most of local media now faithfully reproduces government propaganda. This can be gauged both from their news content which is devoted to covering government activities and also from their opinion pages which eschew any political commentary.

The current situation in Kashmir looks like this: Other than government and the groups supporting it, no other social and political institution survives. There is no established leader active on the scene, no functional political or social organisation which could either articulate the sentiments of their people or formulate a response to the current crisis. 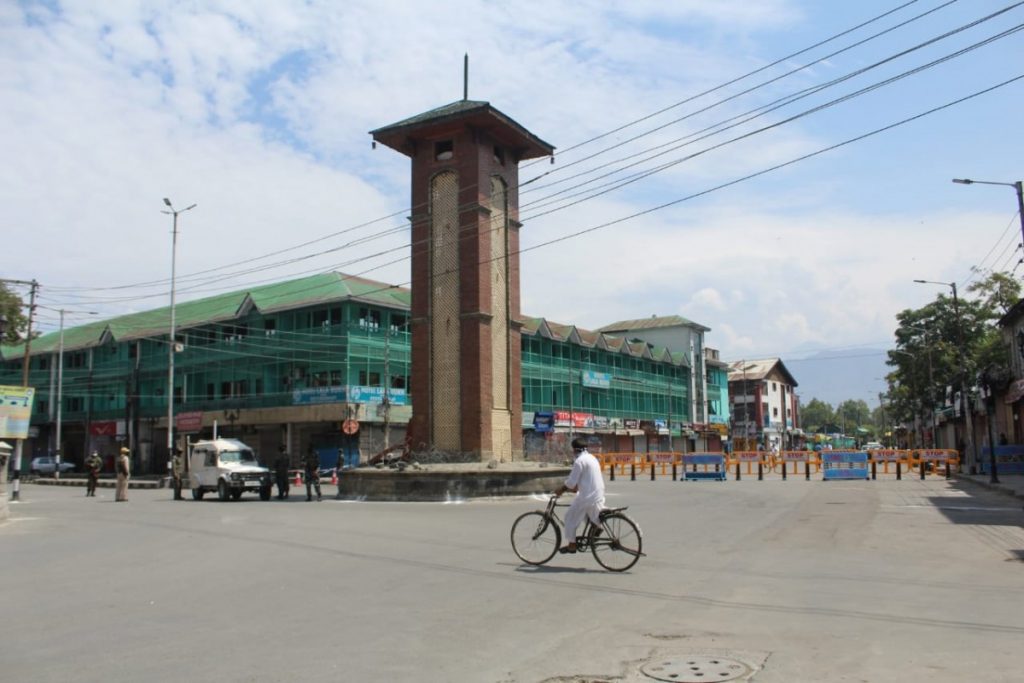 Complete lack of internet and social media for around seven months had also emptied everyday life of the play of the conventional mainstream and separatist discourses and temporarily pushed them out of collective memory.

Criminalisation of protests and their ruthless suppression by use of PSAs against the protesters has ensured an eerie silence on the streets and across political and civil society space.

Naya Kashmir that Sheikh had created is no more.

This has created a deep social and political vacuum that needs filling. And New Delhi is determined to not let the old order come back to life and reclaim the space. It is going for an artificial reconstruction of a new socio-political structure from the ground-up.

To begin with, prolonged suspension of internet and other means of communication was, in large part, to borrow the words George Orwell wrote in The Listener in 1941 “to isolate people from the outside world” and “to shut them up in an artificial universe in which they had no standards of comparison”. This was also geared to give people a break from the play of the local political and social discourse to enable the introduction of an alternate reality.

And it began with spinning of a new story about Kashmir. Justifying the government decision to strip the region of its constitutionally guaranteed autonomy, India’s home minister Amit Shah on August 5 told the parliament that Article 370 didn’t allow democracy in Kashmir, bred terrorism and corruption and hindered development, when the opposite was true.

But the facts haven’t deterred the Modi government from sticking to alternative facts which it has continued to peddle since then, to manipulate the public opinion. It only continues to generate many more such ‘facts’ by the day and put these into circulation.

Having controlled to a large extent what people should hear, watch and read, New Delhi has followed it up by attempting to remake the politics of the region. On March 8, a new political outfit, Apni Party was floated by a businessman turned politician Altaf Bukhari, a former PDP leader and a minister in the Mehbooba-led government. Most of its members have been drawn from the neutralised regional parties.

Introducing his party before the media, Bukhari made it clear their job was not to seek restoration of Kashmir’s autonomy but to work for the development of the region. As things stand, Bukhari’s politics has a free run in Kashmir as New Delhi has ensured he faces no challenge from main parties whose top leaders either remain in jail or under house arrest. And those who are free have adopted a code of silence. Similarly, existing civil society organisations have been coerced into silence and in their place, new groups are being promoted which uncritically toe the government line. Some of these groups were made to meet the three batches of foreign envoys who were brought to Kashmir by New Delhi to showcase the region’s “normalcy”.

The recent past has also witnessed India going for an economic makeover of the region. With the lockdown and prolonged internet gag having wrecked the local Kashmir economy, New Delhi is wooing outsiders to invest in the region with an offer of around 6,000 acres (2,400 hectares) of land. Kashmir bureaucrats were sent to hold roadshows in other states to persuade Indian corporates to invest.

Earlier under Article 370, outsiders were barred from buying land in Kashmir and the businesses from other parts of India would struggle to get land on lease. This had protected the small local economy and the former state’s  land from being overrun by outsiders.

And in all these far-reaching decisions, local people have no say. After August 5 move, New Delhi is in direct control of Kashmir and working overtime to cast the region in its image. And to achieve this it is adopting a totalitarian technique of radical ‘emancipation’ of the society by artificially refashioning terms of political and social reference to alter people’s sense of themselves. The attempt seems to be to create conditions to force Kashmiris to fall into oblivion of their political aspirations and the ongoing three decade long separatist movement. It wants them to snap out of the conflict psyche and reconcile through a sense of resignation, defeat or pragmatism to India’s control, And to this end New Delhi is supplying them a new narrative and a new political and economic environment to rethink themselves.

And this fundamental overhaul of the facts on the ground is  being done coercively by confronting people with a real spectre of an existential threat in the form of a demographic makeover of the place. With Article 370 gone, there  is now no bar on the outsiders to buy land and settle down in Kashmir.

As things stand, New Delhi is certain to prolong the abeyance of the old order to let the new reality take root and grow. Will that happen? Can an alternate reality achieve a degree of authenticity if protected from a challenge from the underlying established reality and backed by the might of the state? Only time will tell.

What is playing out in Kashmir is the war on the Naya Kashmir bequeathed by Sheikh and which for all its troubled baggage had largely evolved from the ground. And in its place being forcibly imposed from above is the Naya Kashmir of Modi in the form of a prefabricated political and social structure complete with an alternative narrative and facts. 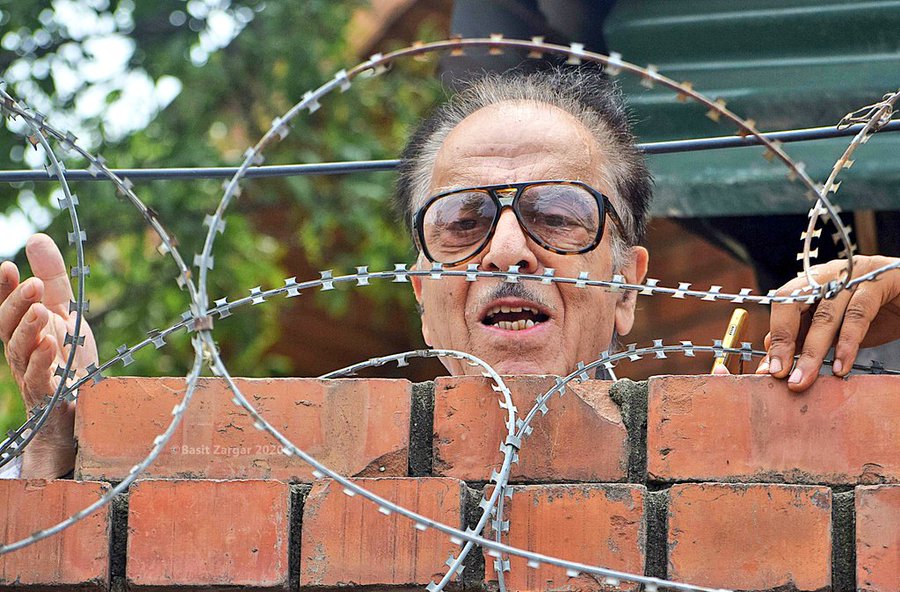 Congress leader Saifuddin Soz speaks to reporters in Srinagar from captivity, hours after the government claimed he was not under any form of detention. Photo: Basit Zargar

In a literal demonstration, as it were, of this unsparing assault on the former, Sheikh’s honorific Sher-i-Kashmir (Lion of Kashmir) is being excised from the institutions and other Kashmir landmarks named after him and his birthday dropped from the list of gazetted Kashmir holidays. His party’s place  is now sought to be filled by Bukhari’s party and the allied outfits. That is, if his son and grandson don’t fall in line with new reality in Kashmir.

Kashmir that is emerging from the long siege is eerily calm, creating an impression that the ongoing socio-political engineering may be working.  But there’s an egregious amount of coercion that is being deployed to sustain this engineering in the hope that an artificial reality is quickly grafted on to a decades-old history of conflict and bloodshed. It is a far-reaching experiment in the works, a more advanced how-to in forcibly remaking a society. And this time by the world’s largest democratic country.

Riyaz Wani is a Kashmir-based, award-winning freelance journalist. He has worked at The Indian Express for ten years, at Tehelka for seven years and at the leading regional paper Greater Kashmir, as its managing editor, until April 2019. He received the Ramnath Goenka award for his coverage of Kashmir in 2015.