J&K Police Denied Media Reports of Illegal Arrests of Minors. Its Own List Is Proof to Contrary

At several points, the very news reports that it seeks to debunk are corroborated by the police in its report, reveals a close analysis. 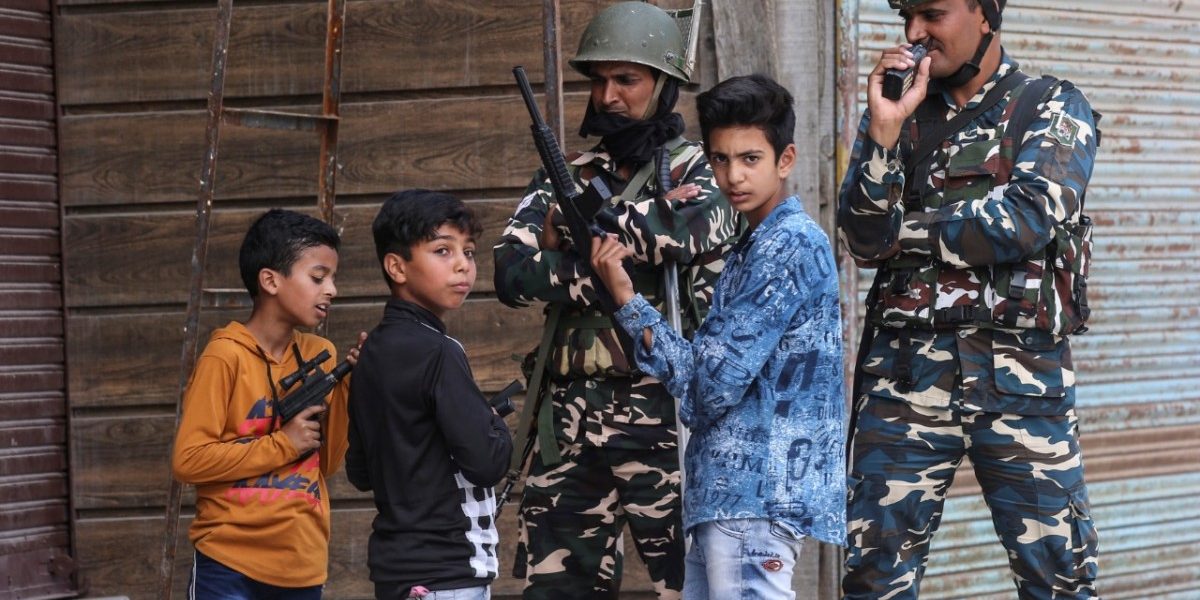 Children play with toy guns next to Indian security force personnel during restrictions after the scrapping of the special constitutional status for Kashmir by the government, in Srinagar, August 13, 2019. Photo: Reuters/Danish Ismail

New Delhi: One of the major objections raised by the Jammu & Kashmir government in a case filed before the Supreme Court concerning the alleged arrest and detention of minors in the state after the scuttling of Article 370 is that the allegations made by the petitioners and information furnished by them are false.

On October 23, in an additional affidavit filed before the apex court, the J&K government demanded that the petition be dismissed on the ground of ‘falsehood’.

However, a close analysis of the Jammu and Kashmir police’s own report – submitted to the Supreme Court last month via the juvenile justice committee of the J&K high court – provides clinching evidence of not just illegal arrests and detentions but also proof that many of the media reports about the arrest of minors cited by the petitioners were indeed accurate.

The charge of falsehood was once again raised in court on Tuesday by  Solicitor General Tushar Mehta, representing the state. He said, according to LiveLaw.

“…Petitioner’s assertion was shown to be false…Under normal circumstances, in a petition before this court, would Your Lordships intervene on a false assertion? It would set a wrong precedent in my submission,”

In levelling the grave charge against the petitioners of making false assertions, Mehta clearly has not even bothered to read the report which the JJ committee submitted to the apex court.

For example, paragraph 3 of the ADGP’s report on Page 22 denies the incidents of arrest of minors as reported by The Washington Post, stating that “report carried out does not indicate the source which has quoted this incident so as to check the veracity of information.”

However, the ADGP’s report, which lists the detention of 144 minors between August 5 and September 23, confirms that at least 11 minors were arrested in Soura, as was indeed reported by The Washington Post. As per the police’s own admission, some of these children were detained under Section 107 of the CrPC, which is a clear violation of the law.

According to former judge of the Patna high court and a senior advocate of the Supreme Court, Anjana Prakash, this section – which is a preventive measure to ensure law and order is maintained and – cannot by statute “be used against a juvenile in J&K or indeed any part of India.”

Similarly, paragraph 7 of the ADGP’s report denies another incident reported by The Washington Post, alleging that the story is based on false reporting. “The report carried by Washington Post on August 30, 2019, about two boys namely Farhan and Junaid is again based on wrong reporting and has not provided the specifics of the alleged incident. It is difficult, almost impossible to enquire and seek report in an alleged incident like this,” asserts the ADGP’s report.

However, the list of detained minors provided along with the ADGP’s report, at serial number 69, mentions the name of Farhan (14) who was detained under Section 107 and 151 of the CrPC. Junaid’s name is not mentioned in the list.

Likewise, paragraph 14 of the ADGP’s report denies illegal detentions as reported by The Telegraph, stating:

According to the report, there was only one juvenile in conflict with law, namely Burhan Uddin, who was apprehended on August 9 owing to his involvement in the case, as per FIR No. 106/2019.

However, the list attached with the ADGP’s report includes children detained in Pulwama, Awantipora and Shopian. In fact, the list, at serial number 129, shows the detention of Burhan-din Hilal (16) as a ‘preventive’ one while paragraph 14 contrarily states that he was “apprehended owing to his involvement in case FIR 106/2019.”

Moreover, out of 144 children shown as detained in the ADGP’s list, at least 70 have been shown to have been arrested under Section 107 of the CrPC. As had been pointed out by Justice Prakash, such arrests are manifestly illegal as they are directly against Section 18 of the Jammu and Kashmir Juvenile Justice Act, 2013.

Furthermore, nine children are shown as having been kept under ‘preventive detention’ although such detention under the PSA is explicitly barred.

In total, at least 79 children were admittedly illegally detained.

Nearly 60 children had formal FIRs registered against them, although most amongst them were released on the same day. Hence, it is not clear why formal proceedings were initiated if as per the authorities the idea was to just counsel children and keep them away from trouble.

No bail bonds or orders of the Juvenile Justice Board have been placed on record.

Also read: With Detention Orders Like These, the State in Kashmir Is Itself Breaking the Law

In seven cases, minors were booked for non-bailable offences, and yet four were released on the same day. No bail orders are placed on record. In two cases, the juveniles were remanded to juvenile homes, but the remand orders are not on record.

Paragraph 6 of the ADGP’s report denies the incident of the arrest of Momin and Omar reported by TRT World on August 29, 2019, stating, it was “not corroborated by the field report sought in this connection [and] as such accordingly denied”.  However, the list records the name of Momin of Umerhair at serial number 66.

Paragraphs 8 and 9 of the ADGP’s report deny incidents reported by Scroll.in on August 28, 2019.

“Regarding the arrest of 12-year-old boy at Eidgah on August 17, 2019, it is empathetically denied that such arrest was made. It happens often that when minor/juveniles indulge in stone pelting that they are momentarily held up on the spot and sent home,” notes the ADGP report.

However, the list shows that he was arrested for ‘bailable’ offences and yet kept in custody for nine days.

A writ petition was filed on September 16 by child rights activists Enakshi Ganguly and Shanta Sinha, asking for a number of interventions into the matter concerning the alleged arrest and detention of juveniles in the wake of the reading down of Article 370.

The petitioners, citing evocative excerpts from media reports relating to instances of maiming and injuries caused to children,  termed the current situation in Kashmir “urgent and disturbing”. To this, the court ordered the Jammu and Kashmir high court’s juvenile justice committee (JJ committee) to submit a report.  In response to the direction from the Supreme Court, the JJ committee had submitted a report last month stating that there had been no illegal detentions.

Accepting that the JJ committee had not fully applied its mind to the issue, the Supreme Court on Tuesday asked it to submit a fresh report.

But child rights  experts believe even  the latest order by the apex court – which has set the date for next hearing for December 3 –  is not going to help much as the issue requires actual and urgent intervention to ensure  the rights of juveniles are not violated in the state. “This is turning into an academic exercise with little help for those being arrested,” a source close to the petitioners told The Wire.