The government order mentions that the process of whitelisting would be continuous, but not the parameters for judging whether a website should be white-listed.

Screenshots of the homepages of news sites that have not been whitelisted.

Jammu: Kashmir’s restrictions on online connectivity have raised concerns over whether they constitute a violation of India’s net neutrality norms, the principles of which ban any form of differential access to the Internet.

The country’s net neutrality rules came into effect in July 2018, when telecom licence rules were amended to incorporate guidelines that have been described as the ‘world’s strongest’. These rules barred any form of data discrimination including “blocking, degrading, slowing down, or granting preferential speeds or treatment to any content.”

ISPs that violated the rules could have their licenses cancelled.

In Jammu and Kashmir, however, as per an order by Shaleen Kabra, the Principal Secretary in the home department of the government of J&K, ISPs were directed to install “necessary firewalls and carry out ‘white-listing’ of sites that would enable access to government websites, and websites dealing with essential services, e-banking, etc, excluding, however, access to all social media sites”.

In an order issued on January 24, instructions were given for the restoration of broadband and 2G internet service in Kashmir for accessing 301 white-listed websites. The list of whitelisted sites was expanded from a previous list of 153 websites to include news websites.

Even online news portals such as The Wire were whitelisted.

However, many local portals of Jammu and Kashmir – such as Kashmir Life, U4U voice, Jammu Links, and Straight Line News – were excluded. This is in addition to the absence of other mainstream national news organisations such as Indian Express, IndiaToday and Firstpost, besides thousands of other news organisations that exist across the country.

While the order does mention that the process of whitelisting would be a continuous one and that the list would be modified, it does not explicitly mention what the parameters for judging whether a website should be white-listed are.

This has created a chaotic atmosphere in the media industry where local portals had already taken a hit due to the six-month long internet shutdown in Jammu and Kashmir. Now the news websites that do not find a mention in the white-list are at a disadvantage to no fault of their own.

Also read: Why Is JioChat the Only Whitelisted Messaging App in Kashmir?

“White-listing of certain news websites while not allowing others does have an impact. You are not able to reach the audience and the audience does not get open access to all content. Even when there is a major crisis, mostly black-listing is done wherein a list of websites is barred from being access. Here, the opposite path has been taken. The wisdom of audience must be respected. There are more than 1.5 billion websites in existence. How can their existence be compared with the 302 websites which have been white-listed,” said Zafar Choudhary, a senior journalist working with The News Now.

“It is a problem that we are missing from the scene but we are trying to ascertain the facts as to how the white-listing has been done,” Hussain told The Wire.

Owners of Universal News Timeline and Jammu Links, two prominent portals of Jammu while talking to The Wire said that they were still talking to the home department regarding what criteria they have adopted for white-listing news websites. 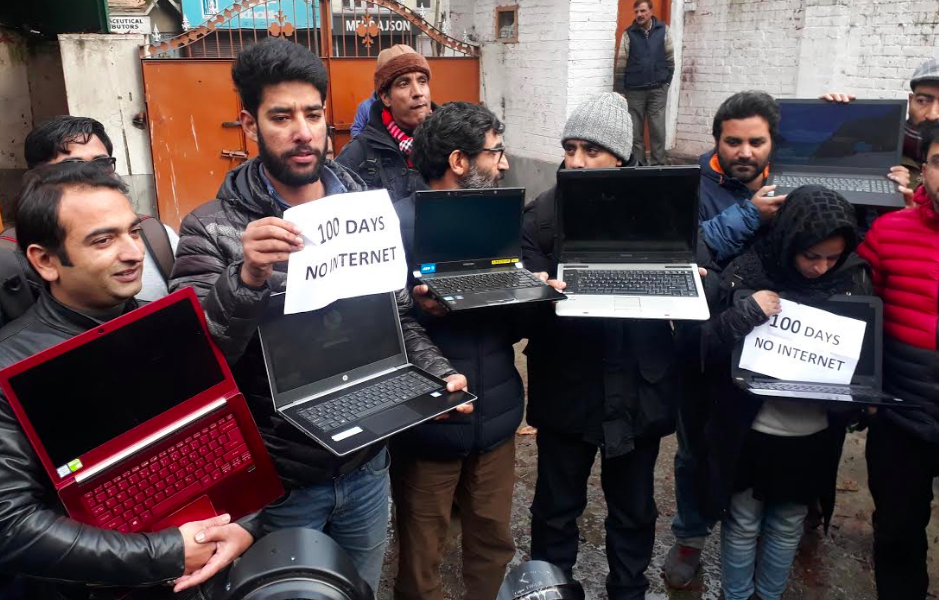 Journalists at a sit-in at Srinagar’s press club to protest the internet gag. Photo: Mudasir Ahmad

When contacted, J&K’s home department said that they are informally adding websites that they have missed out on the white-list, even if they haven’t issued a formal order to that effect.

“After it was brought to our attention that some news websites were missing from the list, like Indian Express, we white-listed all the news portals. Even the local news portals of Jammu and Kashmir, despite them not being on the list in the official order can be accessed on 2G internet,” Shaleen Kabra, Principal Secretary to the government home department said.

When attempts were made to access the news portals which despite not being on the official order were white-listed, it was found that some were opening on select telecom networks while others were not. Also, it still raises a question as to how, without any official announcement, a common man would find out that all the news portals and not just the ones mentioned in the order have been white-listed.

On January 10, calling for a review of the continued internet shutdown in the Valley, the Supreme Court had stated that “freedom of speech and expression through the Internet is an integral part of Article 19(1)(a) and any restriction on it must be in compliance with Article 19(2) of the Constitution.”

However, it had also legitimised the filtration of Internet access by stating, “In any case, the state/concerned authorities are directed to consider forthwith allowing government websites, localised/limited e-­banking facilities, hospitals services and other essential services, in those regions, wherein the Internet services are not likely to be restored immediately.”

In India, the Telecom Regulatory Authority of India has advocated for net neutrality. It has passed orders ensuring that online access is unrestricted and non-discriminatory.

In the TRAI’s order of banning differential pricing, it had stated:

“…allowing service providers to define the nature of access would be equivalent of letting TSPs shape the users’ internet experience. This can prove to be risky in the medium to long term as the knowledge and outlook of those users would be shaped only by the information made available through those select offerings.”

While a total Internet shutdown is legal under current telecom suspension regulations, a white-list, in which the government consciously picks and chooses different services, opens up a whole new can of worms.

“Several stakeholders have highlighted the potential anti-competitive effects of allowing differential pricing. It is argued that this will create an uneven playing field among content providers and service providers – large, well-established content providers and service providers or those that have the benefit of large networks will find themselves in a much stronger bargaining position as compared to new or smaller businesses.”

This “uneven playing field” is wholly present in Kashmir’s whitelist. While major online shopping websites like Myntra, Flipkart, Amazon are white-listed under the category of “utilities”, no local e-commerce website has been white-listed. This lays the ground for unfair competition and an uneven market for local businesses of J&K that have an online presence. What national security justification could there be for allowing Amazon, but not a Kashmiri e-commerce company?

Technology journalist Nikhil Pawha, who edits Medianama, believes that the white-list is a net neutrality violation.

“As the founder of the World Wide Web, Tim Berners-lee says, there should be access to ‘all of the Internet, for all of the people, all the time’….How is allowing the Government of India to define the nature of access any different? Enabling differential access to the Internet is a Net Neutrality violation,” Pahwa wrote recently.

When The Wire reached out to R.S Sharma, chairman of the Telecom Regulatory Authority of India, he said, “I am not the right person to talk to.”

Websites of all political parties including the Bharatiya Janata Party, National Conference, Peoples Democratic Party and the Congress also remain blacklisted. Websites of non-governmental organisations — Amnesty International, HelpAge India, Save the Children and Smile Foundation — are also whitelisted. Among other websites that have been whitelisted are automobile websites, employment sites, travel and official sites of airlines and government websites, including the J&K police, UIDAI, GST department, passport offices and other essential official sites.

Video-streaming websites such as Netflix, Amazon and Hotstar, which are classified as entertainment, have also been whitelisted. But according to the order, social media websites/applications and virtual private network application shall remain barred at least until January 31 after which the restrictions will be reviewed.