NCRB figures for the number of incidents, deaths and injuries may help us understand the low confidence level of Kashmiris in various state institutions. Protests in Srinagar over the EU MPs' visit on October 29. Photo: PTI

Plenty has been written about Kashmir after the end of Article 370, mostly on questions of constitutionality, historical foundations, militancy and human right issues.

We can address these two neglected aspects of the subject by using data to bring to fore the persistent, disproportionately high levels of public discontent in the region, manifested in sustained civilian confrontation with state machinery. The data also shows that levels of confidence in institutions that the region’s people have diverge starkly from the rest of the country.

To begin with, let us consider National Crime Records Bureau (NCRB) data to gauge the trend of the number of occasions of police firing in J&K (separate data for Kashmir is not available) and the consequential deaths and injuries.

Figure 1 shows these in absolute numbers, indicating that after a steep fall post-2002, these rose to a maximum in the year 2008, when there were 396 occasions of police firings, resulting in 43 civilians being killed and 317 getting injured.

Incidentally, this was right after the very year in which the lowest number of police firings were reported (2007), that is 47, resulting in eight civilian deaths and two injuries. To put this in a national perspective (figure 2), while in the year 2007, the state of J&K accounted for approximately 5% of total number of occasions of police firings across all states in the country, in the year 2008, this had gone up to 25%, only to rise approximately 46% in the years 2011 and 2013. 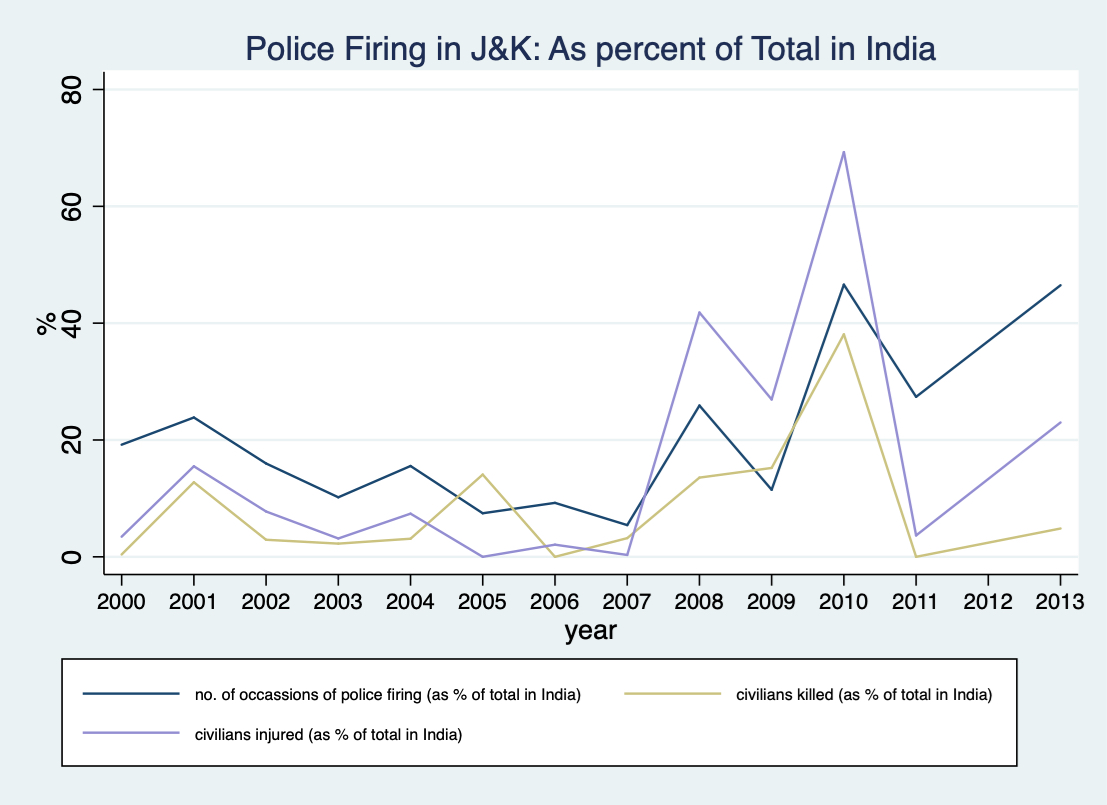 The fact that almost half of all police firings in the country, was accounted for by just one state cannot be overemphasised.

It can therefore be said that, especially after the year 2007, this state has suffered disproportionately (or chosen to suffer for reasons beyond the scope of this article) vis-à-vis the rest of the country – more generally, academic work (largely descriptive and ethnographic) and reports by international organisations on the region, also reflect the uniquely complex situation in the region. This suffering is expected to manifest in people’s confidence in the state and its larger machinery, inter alia, in a manner that departs from the rest of the country.

In fact, the India Human Development Survey (IHDS) shows that households in selected districts of Kashmir, report relatively much lower confidence in institutions than the rest of the country.

Note that since this data is a strongly balanced panel (same households surveyed in both rounds), the loss of confidence indicates that there are those who earlier had confidence, have lost it over time. A re-look at figures 1 and 2 shows that after 2008-09 (for reasons beyond the scope of this piece), there was huge spike in police firings, both in absolute numbers and relative to the rest of the country. Since the second round was conducted in the period 2011-12 and the first round in 2004-05, this becomes a story of what economists call a “natural experiment,” a very unpleasant one albeit.

Moving to other categories of state institutions, while 22% of households had “hardly any” confidence in the police, this figure was 56% for Kashmir, up from 48% in round 1. A great deal of confidence is reported by 25% of the respondents in the rest of the country, while the corresponding figure for Kashmir is only 5%. 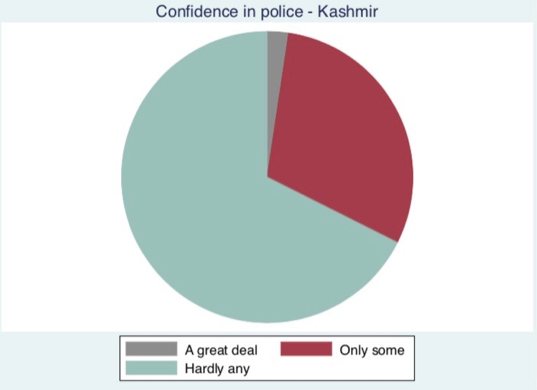 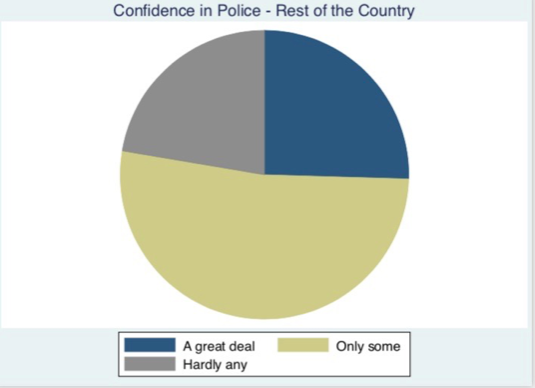 The difference in confidence that politicians will fulfil their promises, is somewhat less stark, but still massive, with 50% of the rest of the country having “hardly any confidence”, the figure being 86% for Kashmir. As is the case earlier, the latter’s confidence has declined over time, as in the first round, 69% had hardly any confidence. 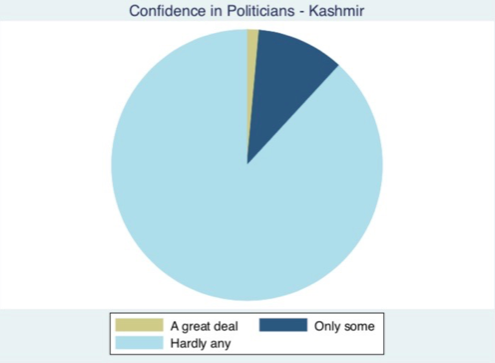 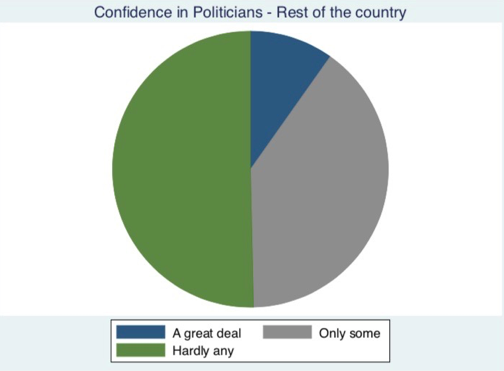 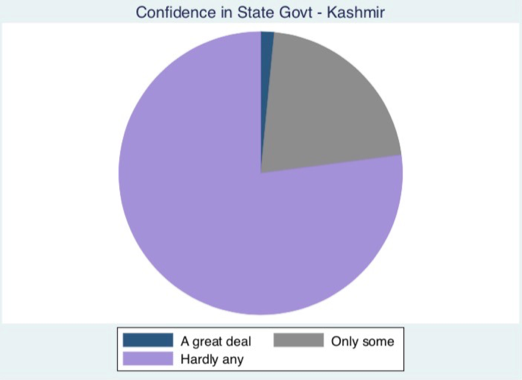 Finally, confidence that newspapers will print or broadcast the truth is “hardly any” by 19% of respondents in Kashmir, the figure being much lower at 8% for the rest of the country. Relative to all other institutions, this is a very encouraging number, although the fact that 59% of Kashmiri respondents have “only some” confidence on this parameter (49% for the rest of the country), is a dampener. 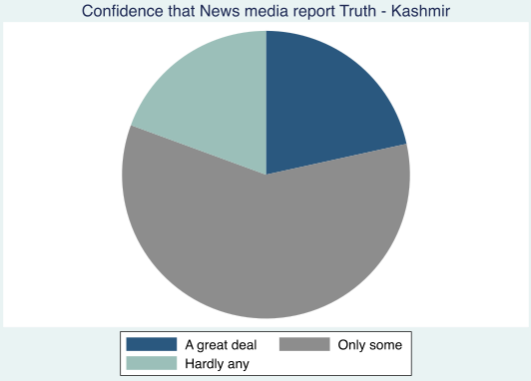 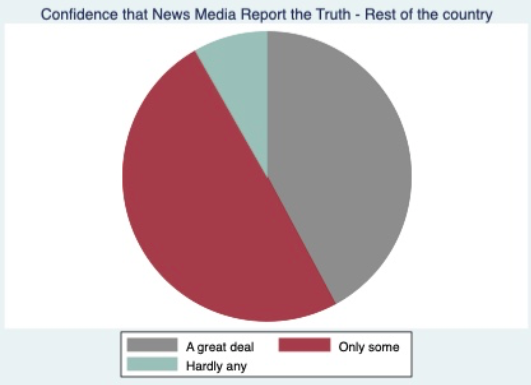 It is interesting that confidence in institutions, in the form reported above, hardly vary with levels of social status such as household’s economic status (being poor, middle-class or “comfortable”) and highest number of years of education attained by anyone in the household.

For the objective of integration of a region with the rest of the country to be meaningful, the point of departure must be its people. Persistence of the disconnect between the people within and outside the region on one hand and the region’s people and the state on the other, as has been exhibited here, will attenuate any efforts at integration.

Malvika Tyagi is an economist and was Visiting Fellow 2019-20 at LSE. Her areas of interest include Political Economy and Economics of Crime and Conflict.

Note: In an earlier version of this article, Figure 2 – Police Firing in J&K as a Percentage of Total in India – was incorrectly plotted. The earlier, incorrect plot showed the J&K percentage as lower than what it actually was for 2010.