Doctors fear she may lose vision as the pellet has damaged critical parts of her eye. 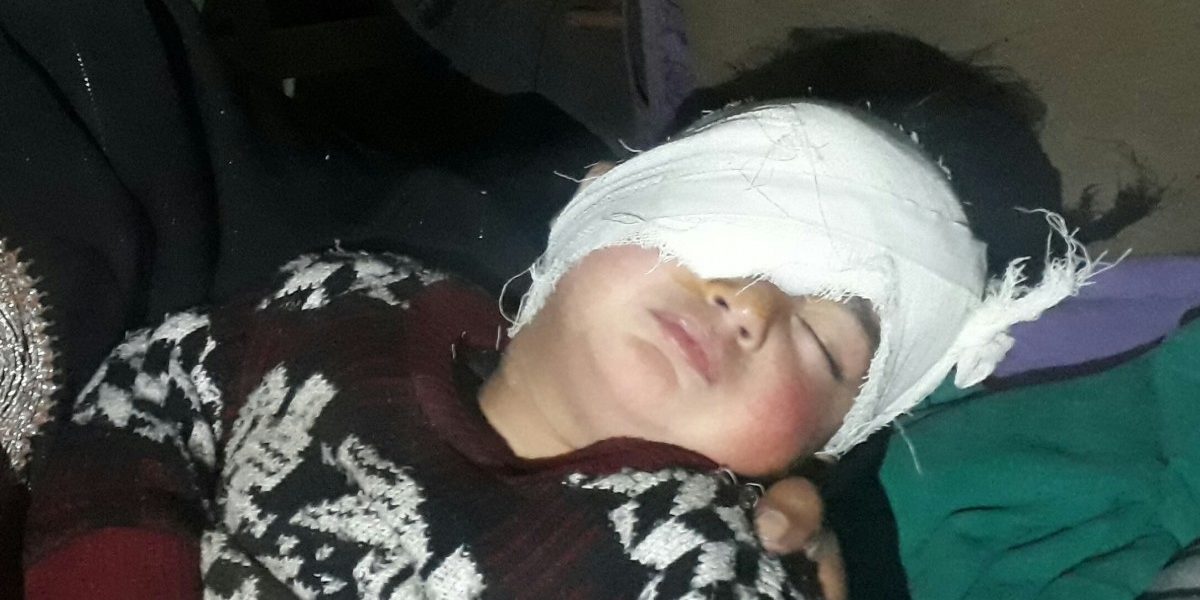 Srinagar: No one in the ward could control their tears as 19-month-old Heeba cried in pain. “Mye traw, yele traw mye (leave me, let me go!),” her voice echoed at Srinagar’s Shri Maharaj Hari Singh hospital.

Every time her mother would respond, Heeba tried to remove the dressing pad from her injured right eye with her little hands.

Heeba is the youngest victim of the pellet guns which have ravaged hundreds of lives in Kashmir since 2016.

“A pellet has gone deep inside her eye, causing injury to parts critical for vision. We have done primary care, but she would require a surgery,” said a surgeon who attended to her.

Heeba was injured on Sunday morning, when her family was trying to flee their home in Kapran village of Shopian district. Intense teargas shelling by security forces made the air unbreathable.

An encounter had broken out in Batgund, a neighboring village. The forces had fired teargas shells to chase away youth who tried to break the cordon and help the holed up rebels escape.

“Heeba and my five-year-old son were choking. I thought we might die inside the house as dense smoke started to fill the rooms,” sighed Marsala, Heeba’s mother, with teary eyes.

When she stepped out of her house, she saw a group of policeman chase away protesting youth in her direction. 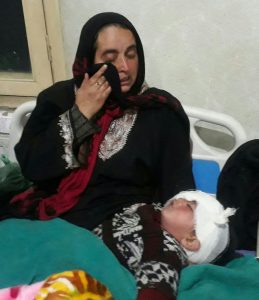 “The next moment, they fired pellets. As I tried to cover my daughter’s face, I saw blood coming out of her eye,” she said, recalling the horrifying moment.

After a brief pause, as attendants were listening to her keenly, the 37-year-old looked at her daughter. Her red-cheeked face was glowing under the light of a bulb hanging above the bed.

“You were my little angel, you were the vision of my eyes. Look what they have done to you,” she cried.

The little girl’s pain brought tears to her father Nasir Ahmad’s eyes. He held his daughter’s feet and kissed them and the couple broke down.

Watching this scene, even some nursing staff couldn’t control their emotions and more attendants circled Heeba’s bed and tried to console her parents.

“Look at her hands,” Marsala told the attendants, gently opening her daughter’s hands, which were freshly dyed with henna. “She had got it only yesterday and she was very excited, showing it to everyone in the neighborhood.”

By now, Heeba, who had fallen asleep under the effect of anesthesia, woke up again. “Leave me, leave me,” her cries echoed again.

“Would that I were in your place. Would that the pellet had hit my eye instead,” Ahmad cried helplessly, seeing her daughter in pain.

The father was upset that he wasn’t home when the tragedy befell. A laborer, Ahmad had gone to nearby Kulgam district two days before to work in an orchard. An early morning call from his cousin broke the bad news about his daughter.

“She would talk non-stop all day long; she was my little, lively daughter. Will she be the same ever again?” Nasir asked, to complete silence from everyone in the ward.

One of many cases that day

Moments later, the silence was broken by the cries of two young boys who were rushed into the ward on stretchers, their eyes bandaged. “Both of his eyes have suffered pellet injuries. A doctor said there is a small chance of him regaining some vision in one eye,” a man told this reporter about one of the boys, who was shifted on a bed adjacent to Heeba’s.

“The young generation is being pushed into a dark world, one by one…and we are all watching it helplessly,” reacted an elderly man.

By late evening, the hospital received seven persons with pellet injuries to their eyes. They were the latest in a long list of young boys and girls who have lost vision in one or both eyes, either partially or completely, to pellet injuries since the deadly July 2016 uprising.

Also Read: The Unfolding of the Encounter in Which Militant Accused in Shujaat Bukhari’s Murder Was Killed

Each time there is a gun battle in any part of Kashmir or protests break out somewhere, doctors at ophthalmology department of Srinagar’s SMHS hospital gear up to receive the injured.

“Since 2016, we have received more than 2,000 such cases. No matter how good the treatment is, the pellets leave a permanent scar on the lives of patients,” said a doctor. “Only lucky ones get some ‘useful vision’ back.”

“We will evaluate her eye again in two days to determine the extent of damage,” the doctor told Heeba’s uncle, Manzoor Ahmad, in the hospital corridor. Perhaps asking him to prepare for the worst, the doctor says that pellets have rendered hundreds of eyes completely impaired.

Inside, the ward again reverberated with Heeba’s cries. The little girl was uttering incomprehensible words, followed by screams of  “dag, dag” (pain, pain).” Everyone watched helplessly as Ahmad and his wife struggled to calm their daughter.