In Kashmir, Freedom at a Price: Go Back to Jail if You Speak or Comment on Article 370

As a condition of release, detainees are being made to sign an undertaking that they will “not make any comment(s) or issue statement(s) ... related to recent events in the state of J&K" for one year. 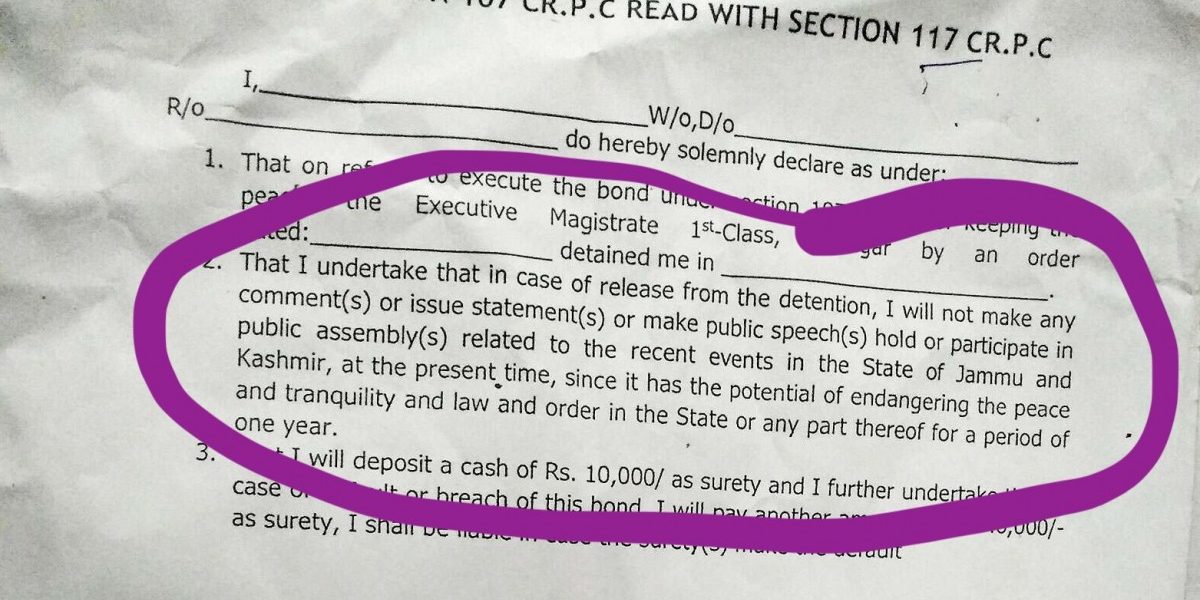 New Delhi: In a move that openly violates the constitutional protection of free speech in India, political detainees in Kashmir, including top leaders, are being forced to sign a bond that will bar them from speaking or commenting on the “recent events” in the state as a condition of their release.

According to a report in The Telegraph, two women detainees who were released recently were required to sign a modified version of the standard ‘Section 107’ bond that is normally used in cases when a district magistrate uses his administrative powers under the Criminal Procedure Code to take someone into preventive custody.

Under the usual terms of the bond, potential troublemakers have to promise “not to commit a breach of the peace” or carry out any acts that “may probably occasion a breach of the peace”.  Any violation of this promise will see the detainee forfeit an unspecified sum of money to the state government.

The new bond however ups the ante in two aspects.

Firstly, the signatories undertake to “not make any comment(s) or issue statement(s) or make public speech(s) hold or participate in public assembly(s) related to recent events in the state of Jammu and Kashmir, at the present time, since it has the potential of endangering the peace and tranquillity and law and order in the state or any part thereof for a period of one year”.

The reference to “recent events” likely signifies anything to do with Article 370 or the decision to bifurcate Jammu and Kashmir into two Union territories and scrap its status as a state. 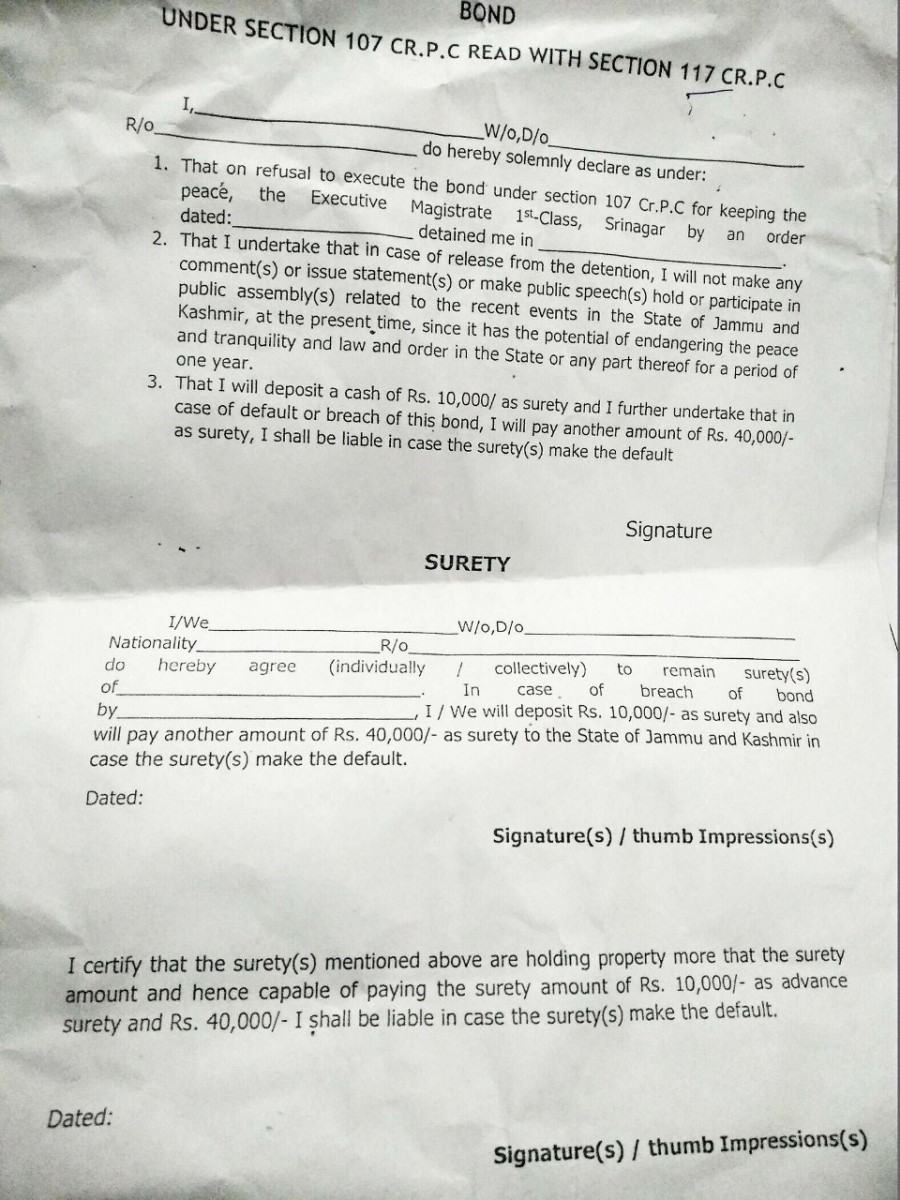 A copy of the bond detainees in Kashmir have to sign now if they want freedom. Credit: The Telegraph.

Legal experts and rights activists believe that these new conditions are problematic and unconstitutional.

“Under Article 19(2) of the Constitution, freedom of speech can be restricted if there is an incitement to imminent violence. The Supreme Court has repeatedly held that advocacy – even of revolutionary views – is permitted as long as there is no incitement to violence. Section 107 of the CrPC, therefore, cannot be used in a way that makes the personal liberty of an individual conditional upon a wholly unconstitutional restriction of their right to free speech,” Gautam Bhatia, a lawyer who writes on constitutional matters, told The Wire

It is unclear to what extent the modified Section 107 bond has been deployed, but The Telegraph report says that “scores of people… are believed to have been freed after they signed the bond, while several leaders – like former chief minister Mehbooba Mufti – have reportedly refused to sign it”.

Also Read: Justice Anjana Prakash on how the Jammu and Kashmir Police Has Violated the JJ Act in Detaining Children

Other reports over the past two weeks have indicated that all political detainees are required to sign a bond as a condition of their release, but have not stated whether those release agreements contained the new restrictions.

Reports say detainees released today were forced to sign bonds.Under what law is their release conditional as their detention was illegal itself? Many including Ms Mufti have categorically refused to sign these bonds. The govt with its rudderless approach is tying itself in knots

When The Telegraph contacted state advocate-general D.C. Raina, he denied having seen the new bond but nevertheless defended it as being “absolutely” legal.

In particular, Raina said that any change in language did not take away the basic spirit of Section 107 of the CrPC, which was to maintain peace.

“It (the change in language) does not alter or take away the basic spirit. The language is only the format, the sense remains the same…. I don’t think that (considering the bond illegal) will be the right understanding. It falls within the purview of the law,” he told the publication.

“I have not seen that (the new bond) but from your expression (after The Telegraph read out its contents) I get it that it is primarily the added expression or manifested form of the same spirit of the language.”

J&K high court lawyer Altaf Khan, who was counsel for the women who signed the new bond this week, said that it “contradicts the constitution”.

“This (bond) is all new.… They can make changes but those changes have to be in accordance with the law,” he was quoted as saying.

Human rights activist Khurram Parvez told The Telegraph that nearly 6,000 people had been arrested in the clampdown over the last two months and that “many of them” had been released under the conditions of the new bond.

The Wire however could not immediately verify whether the new bond had been used while releasing detainees over the last two weeks.

On Sunday though, BJP national general secretary Ram Madhav defended the Centre’s stance of detaining people to achieve peace and development in Kashmir and alleged that many local leaders were telling people to take up arms and sacrifice themselves.

Madhav, who apparently was visiting the valley for the first time since the reading-down of Article 370, said if 200-300 people are to be kept inside jails to achieve peace, “then we will keep them”.

It is not clear which leaders Madhav is referring to or why, if indeed some of them are inciting violence, the state has not slapped formal charges on them.