In Kashmir, an 'Open FIR' has Led Police to Investigate Hundreds Over VPN 'Misuse'

The police insist that they have 'incriminatory material' that can tell the difference between use and misuse of VPNs. 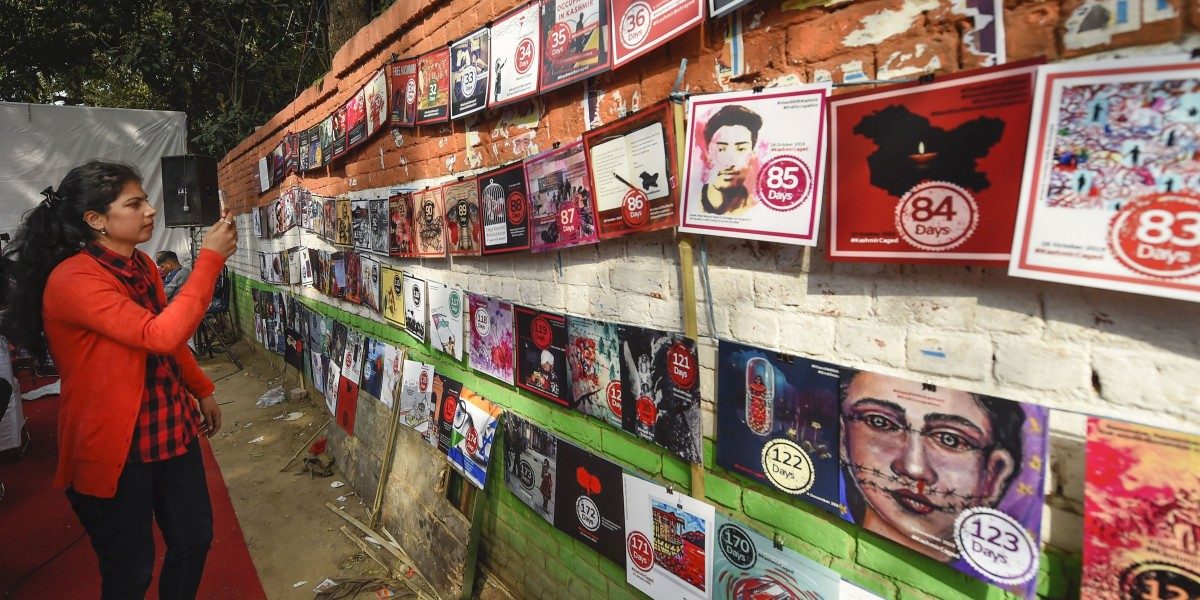 Banners on display during a protest against the Kashmir lockdown in New Delhi. Photo: PTI

Srinagar: Kashmir’s police have questioned “many” social media users after filing an open case against those who use virtual private networks (VPNs) to circumvent the ban on social networking platforms in the union territory.

“We are monitoring social media use in Kashmir closely and have questioned many who have been misusing the social networking platforms,” said a senior police official.

According to the official, questioning was started after Jammu and Kashmir police on February 17 registered a case (FIR No. 01 of 2020) under Section 13 of the stringent Unlawful Activities (Prevention) Act (UAPA), sections 188 and 505 of the Indian Penal Code Act and section 66-A (b) of the IT Act against “hundreds of social media abusers” in the Valley.

On Wednesday, the Director General of Police (DGP) Dilbagh too talked about action being taken by the police against the “social media abusers”.

“…don’t be under the misconception that it (social media) is not being used in Kashmir. And if we are picking up people on this basis, we know that people are misusing it. We are selectively picking people from the places where these things are happening,” the DGP told a press conference in Srinagar.

Neither the police chief nor the official, however, revealed the number of users who have been questioned so far. The police official also refused to comment on whether any formal arrests have been made in the case.

This is the first time the police have invoked the UAPA over alleged misuse of social media in the Valley. The stringent Act allows the government to designate individuals as “terrorists”.

“We have filed a general FIR and whosoever is found involved during the course of investigation will be arrested,” said the IGP.

He said despite the ban, many netizens were using social media through VPNs. “The miscreants are using social media to spread rumours and instigate people and some are facilitating militants to throw grenades. We have the proof,” said Kumar. “Those indulging in such activities and trying to disrupt peace will be arrested.”

Also read: A Finely-Tuned War of Attrition in Kashmir

The J&K government had on January 14 banned all social media platforms to curb their “misuse by miscreants for propagating false information having the effect of causing social instability,” days before it partially restored internet service in the Valley.

The administration had snapped the internet and other means of communication in the region on the intervening night of August 4 and 5 last year, hours before the Centre scrapped J&K’s special status.

Slow-speed mobile connectivity in the form of 2G internet services was restored in Kashmir after more five months on January 25.

The facility was however initially restricted to only 301 “white-listed” websites. On February 15, the J&K government said it has white-listed 1,485 websites, but it extended the ban on high speed 3G and 4G internet services till February 24. The social media platforms or similar applications/websites which allow peer-to-peer communication did not figure in the updated list.

“The misuse of social media has led to widespread disinformation and fake news. There are continuous reports that social media is being misused to propagate anti-social and unlawful activities by posting fake news,” said Tahir Ashraf, who heads the cyber police in Kashmir.

In a statement issued to media on February 17, the police said the case was registered while taking cognisance of the social media posts by “miscreants by use of different VPNs, propagating rumours with regards to the current security scenario in Kashmir, secessionist ideology and glorifying terror acts. A lot of incriminating material has also been seized in this regard.”

As The Wire has previously reported, J&K residents have been using VPNs to bypass the firewall created by service providers to access social media. A local news gathering agency quoted an official of Bharat Sanchar Nigam Limited (BSNL) earlier this month on how they have flown a team of experts from Noida and Bengaluru to create a firewall to thwart any attempt by users to access social media applications using VPNs. He had said that the broadband internet services would not be restored in Kashmir until the firewall was created and access to social media blocked.

Tahir said the case was registered against “hundreds of social media abusers” in the Valley.

“We have identified hundreds of suspected social media profiles based on the contents posted by them on different platforms. All these profiles are under investigation,” he said, adding police have also forwarded the profiles to social media companies including Facebook and Twitter and asked for preservation of the data.

The police official said they have withdrawn Section 66-A (b) of the IT Act invoked to register the FIR. “That section (66-A (b) was included in the initial FIR as an error but it was subsequently deleted since this section has been struck down by the Supreme Court,” said the police official.

The apex court had in March 2015 struck the section down as “unconstitutional”, on the grounds of violating freedom of speech guaranteed under Article 19(1)(a) of the constitution, in the case Shreya Singhal versus Union of India.

The DGP said the J&K police was aware that media persons in Kashmir were using social media. “We are clearly telling you that give any relaxation in case of the misuse (of social media),” the DGP said.

“You are making misuse of loopholes (in the system). This is in our knowledge. You are using the social media as service providers are not fully equipped to block it despite orders from the government. It is being used despite the government instruction. But we can differentiate between use and misuse. When you will misuse it, there will be no relaxation,” said the DGP.

He was responding to a question that the police was using WhatsApp to share press releases and send invitations for events including in spite of the ban on the use of social media.

The top cop said the police was keeping an eye to ensure that the use of social media was in “tolerable limits”. However he cautioned that the government and police will be forced to take the decisions in case of the misuse.

“Whatever the decisions will depend on the use and misuse, but we are trying to keep good vigil on the social media,” he said.