The visitors found that there was a 'determined and systematic effort' on the part of the Centre to 'portray a sense of normalcy in the Valley.' 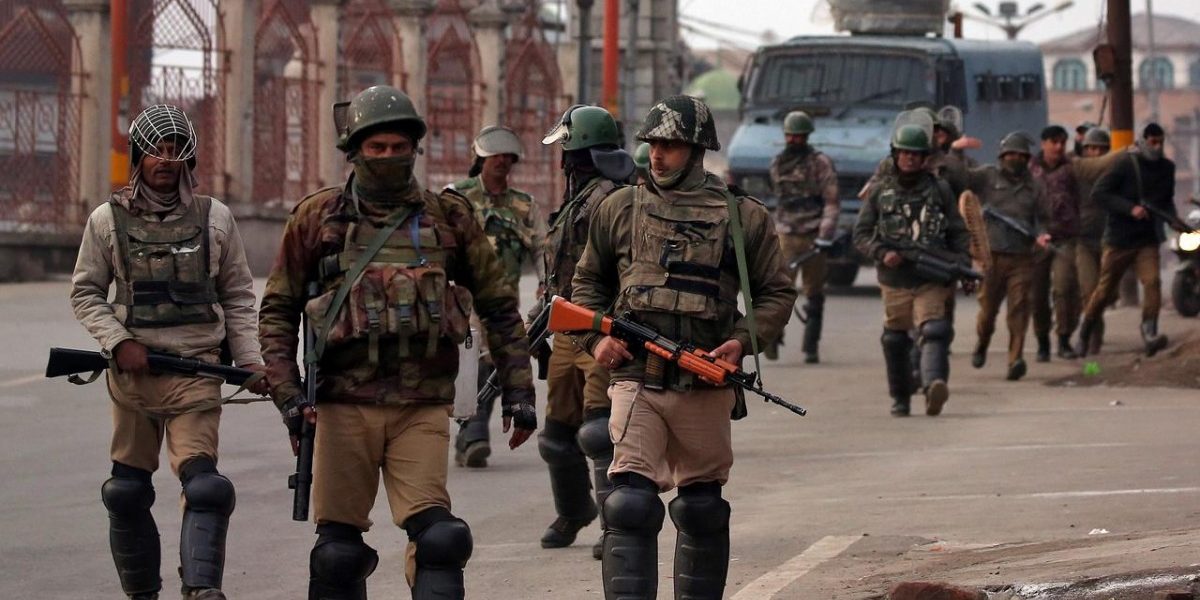 Jaipur: An  11-member team comprising advocates, trade unionists, human rights activists and a psychiatrist visited Kashmir between September 28 and October 4 this year. The trip, largely to gauge the situation in the region since the reading down of Article 370 on August 5, gave the visitors the impression of a ‘determined and systematic effort’ on the part of the Centre being in play, to ‘portray a sense of normalcy in the Valley.’

This, said the team while releasing their findings in a report titled Imprisoned Resistance at New Delhi, was largely due to justify the Centre’s unilateral action of snatching the autonomy of the Kashmiri people.

“The Indian government and the mainstream media have consistently propagated normalcy by showing images of traffic flow in Srinagar that were created artificially to be later recorded by drone cameras,” reads the resultant report.

The report made several notes on how movement and communication had been severely clamped down upon in the valley.

“Jammu and Kashmir State Road Transport Corporation has suspended operations since August 5. Only those with private vehicles are able to travel, that too with much difficulty given the barbed wires at multiple locations. Though landline services were eventually restored, we learnt that very few houses actually have functioning landlines.” 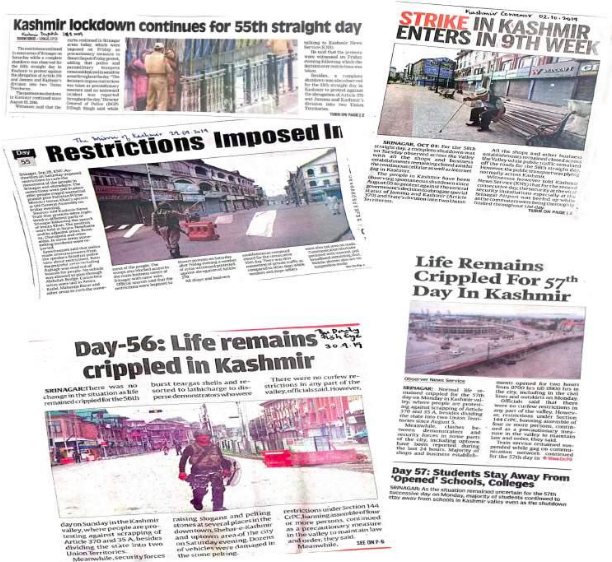 A collage from the report showing clippings of local news.

Health facilities only for a few

Besides this, the Primary Health Centres (PHCs) in Kashmir were found barely working because of which people had to make the arduous journey to reach Srinagar for treatment. Even after the schools were opened, parents were not willing to send their kids to schools, both in a gesture of protest as well as in fear for the safety of their children.

Highlighting the troubled situation of the press in Kashmir, the report put forth that many reporters have been laid off as the news organisations have been unable to pay them salaries.

“There is constant surveillance and policing at the media centre in Srinagar and at the Srinagar Press Club, creating an atmosphere of fear and intimidation in which journalists could not possibly function with any semblance of independence,” a journalist told the team.

“People unanimously communicated their anger and the sense of betrayal felt by them, to a major part, towards the bias and false reporting by the Indian mainstream media, and also towards the silence of the local media over the hardships, human rights violations and tragedies faced by the people, which were not making it to the newspapers,” the report states. The government of Jammu and Kashmir’s ad on page one of ‘Greater Kashmir’.

The degree of surveillance and control by the Army has unprecedentedly been on the rise since August 5. Armed forces now barge into houses at any time.

“Since August 5, 2019, armed forces have been conducting raids on villages and localities in the city almost every night, and most definitely if there is any protest or incident of dissent on the part of the people. Villagers are sleepless because of the night raids, harassment, humiliation and torture. People said that the forces barge into the village while screaming abuses and throwing stones at the houses,” reads the report.

Numerous cases of illegal detentions of minors and adults alike were encountered by the fact finding team.

“There are numerous cases of torture by the armed forces. In some instances, the tortures are made audible through loudspeakers so that other people can hear the victim’s screams. There have also been deaths due to tear gas shelling at protesters. What remains a big question in this situation is, when the armed forces and other bodies of the state are indulging in such violations, where is the innocent victim supposed to go for redressal?” states the report.

Advocates in Kashmir have boycotted regular court proceedings since most of their elected representatives in the Bar Associations of the High Court and the districts have been arrested and detained under PSA, while others have been threatened with the same fate if they spoke against the Modi government’s unilateral decision on Article 370.

Between August 5 and September 30, more than 330 habeas corpus petitions had been filed.

In many instances, the draconian Public Safety Act is being slapped arbitrarily on people. Local reports suggest that more than 13,000 people have been unlawfully detained and most of them are being transferred outside Jammu and Kashmir, in order to prevent family members and advocates from appearing for them.

An advocate from the TADA court told the team the police is invoking UAPA even in stone pelting cases. He also informed that in many cases, even after the accused secures bail, the Station House Officers don’t execute bail orders and the trials get adjourned since witnesses in most of the cases are unable to reach courts.

The team also observed that the blatant abuse of power, violent aggression and extreme forms of abuse (physical, sexual and emotional) unleashed on the Kashmiri people has caused deep and destructive trauma that may take generations to heal.

Not only has it caused extreme suffering and a plethora of mental health disorders of unprecedented proportions, it has also manifested in the seething anger, acute polarisation and paranoia, a complete lack of trust and hardening of attitude towards India.

“Between August 5 and 6, 2019, the Modi government issued two presidential orders that…effectively dismantled the limited protection afforded to Jammu and Kashmir in self-governance, territorial integrity and the collective rights to land and livelihood,” it said.